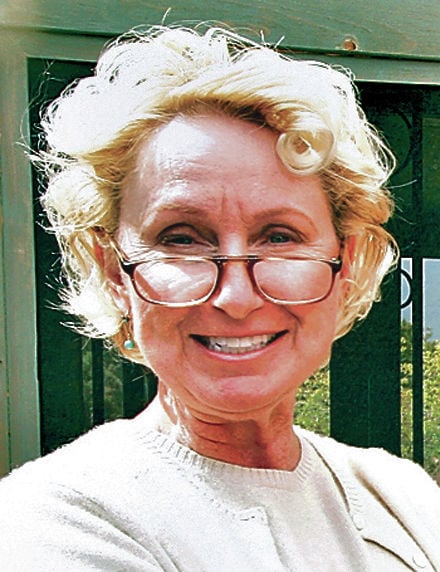 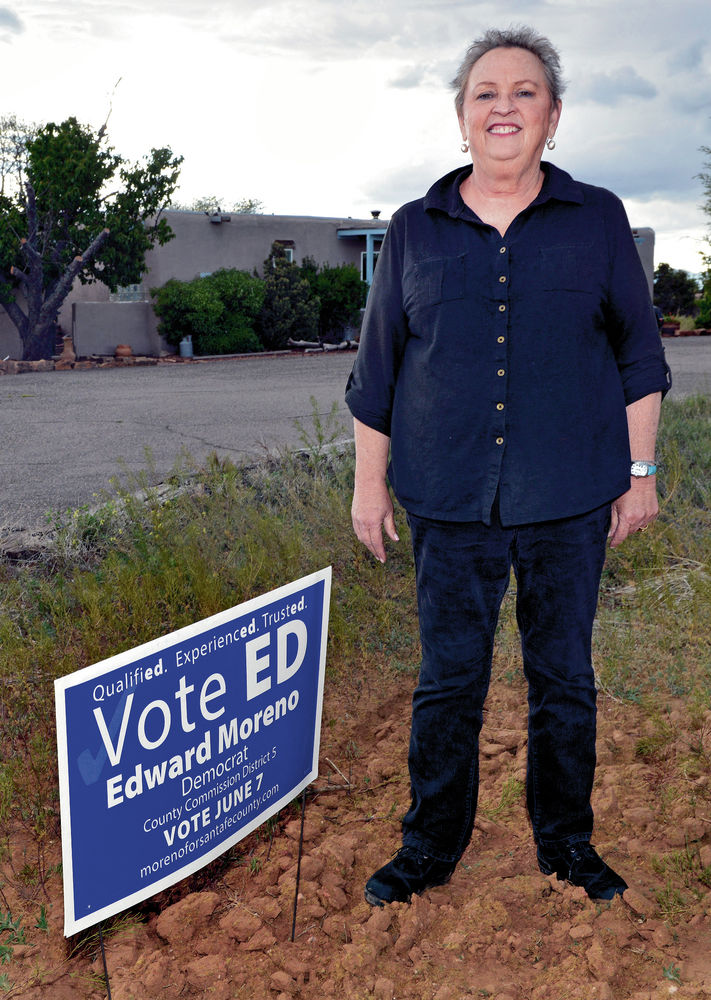 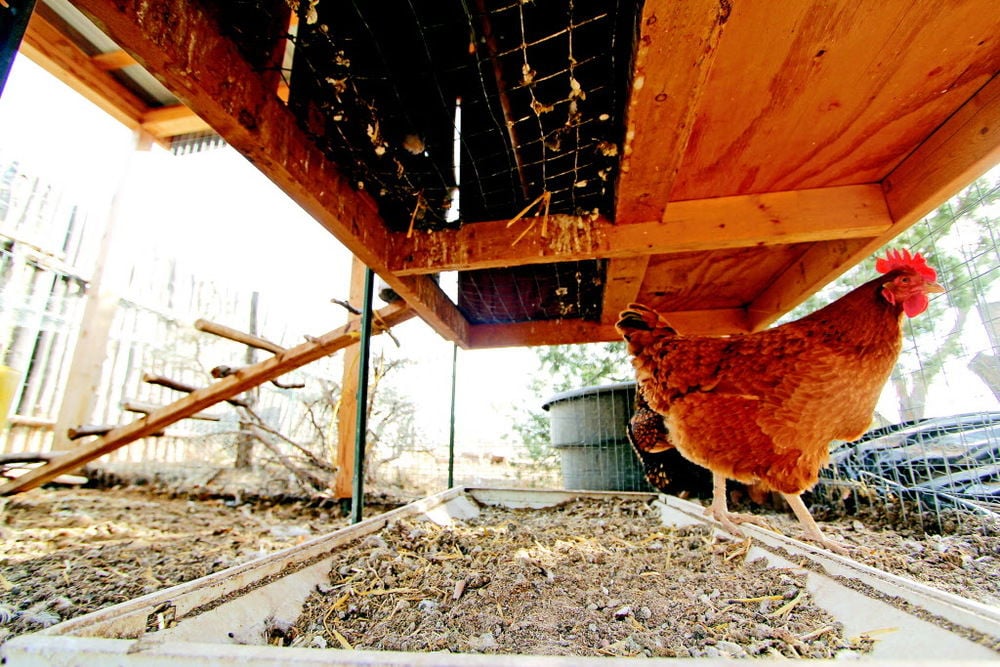 A chicken walks around in its coop on an Eldorado property. A board member with the Eldorado Community Improvement Association continues to fight to ban backyard hens. New Mexican file photo

Solar panels can be seen from the road in front of an Eldorado home on Moya Loop. Clyde Mueller/New Mexican file photo

A chicken walks around in its coop on an Eldorado property. A board member with the Eldorado Community Improvement Association continues to fight to ban backyard hens. New Mexican file photo

Solar panels can be seen from the road in front of an Eldorado home on Moya Loop. Clyde Mueller/New Mexican file photo

The board of directors of the Eldorado Community Improvement Association censured one of its own last week for removing a political sign from private property before the recent state primary election.

But some Eldorado residents want to go further than censuring homeowner association board member Claudia Daigle, who also has launched heated battles in the subdivision against backyard poultry and ground-based solar arrays. They are circulating a recall petition that last week had more than 300 signatures.

Joan Alm, who is collecting signatures on the petition, said only three people have turned her down. And many were “practically running up to sign.”

In the most recent controversy, Daigle, who ran unopposed this year for a position on the board, took matters into her own hands last month when she walked onto a private lot and then carried off a sign advertising Ed Moreno for the Santa Fe County Commission. Daigle believed the homeowner had put up the sign too early.

The Eldorado subdivision’s covenants say such signs may only be displayed two weeks before the election. But in recent election cycles, the board has allowed them two weeks in advance of early voting. The homeowner, Karen Taylor, put up her sign within that time period.

Daigle also removed signs on county property near the first entrance to Eldorado, but that was not mentioned in last week’s censure letter.

The letter, approved by all other board members, also sanctions Daigle for possessing a list of security codes from the 2015 board election.

“We find these actions to be alarming, totally inappropriate, and in direct contravention of policies and procedures of the board on which you are serving. Such misbehavior undermines the credibility and good will of our association and serves only to tarnish the reputation of the community as a whole,” the letter said. The motion was submitted by board President Dag Ryen and demands that Daigle “cease and desist” from such actions in the future.

Daigle remained calm during the vote on the motion to censure and restated her belief in her own interpretation of the covenant. “I’m being censured by a small population of the community,” she said.

Actions against people who tamper with campaign signs are rare, but an Orange County, Calif., councilman was censured last year for removing campaign signs belonging to a fellow councilman.

Louise Roach, who said she signed the recall petition for Daigle on the first day it began circulating — and notified all her neighbors to join her — said the removal of a resident’s political sign spurred many people to act against Daigle.

“I’m just trying to stay level-headed,” Roach said. “I don’t like holding grudges. But we have to have people who are rational making decisions for us.”

Homeowners hoping to remove Daigle from her board seat will need to gather 416 validated signatures and then ask the association board to hold a recall election. Ballots would be mailed to lot owners.

Daigle would be given an opportunity to provide a written rebuttal. Her removal from the board would be effective upon certification by the secretary that 60 percent or more of the votes cast were in favor of her ouster.

Alm said Daigle “does believe in what she’s doing, and I respect her for that. Anybody willing to take the time and energy I respect, whether I think they are right or wrong.” But, she added, “I don’t want any more time or money wasted.”

And while she doesn’t want the petition drive to seem mean-spirited, Alm disagrees with the positions that Daigle has taken against allowing Eldorado residents to raise poultry in their backyards and to erect ground-based solar arrays on their property.

Daigle, meanwhile, has indicated her intention to continue her fights. At the Thursday board meeting, she again proposed a vote on a covenant that would ban backyard poultry and livestock. It failed for want of a second.

The courts have ruled against her on both chickens and solar arrays.

This spring, the New Mexico Court of Appeals found that the subdivision’s covenants do not preclude owners from having hens as recognized household pets. The board has agreed to abide by the ruling, citing financial considerations and restoration of harmony in the community.

It decided instead to initiate a good faith process for developing guidelines on the keeping of hens in the community. A proposed interim resolution posted on the Eldorado Community Improvement Association’s website would ban roosters, set a limit of eight pet hens and require that hen enclosures conform to all covenants and guidelines.

The association also is collecting comments and suggestions from members of the community until July 5. And a public forum is scheduled for later in July.

Also this year, the Court of Appeals granted a summary judgment in favor of the association in the solar litigation brought by Daigle. Reaffirming the lower court, a three-judge panel said the subdivision’s covenants do not prohibit the installation of ground-based solar arrays.

Since the hen ruling, a few residents have bought chickens, including some who had gotten rid of them during the chicken litigation.

“I have wanted chickens for the longest time, and I was finally able to get them,” Alm said. Now, she said, she will do everything to “protect my girls.”

Alm has four hens, two red sex links (a cross between a Rhode Island Red and a white rock) and two silver-laced Wyandottes. “I sit and have coffee with them every morning,” she said. “They come over and sit next to me and preen my hair.” But they don’t like to be petted, she said.

Alm doesn’t buy the claim of some chicken opponents that everyone will now want them. “They have kids, jobs,” she said. “Not everybody is going to get a new puppy. They’re busy.”

The Eldorado chicken owners are staging an upcoming dance and potluck to raise “scratch” for legal fees. The event is from 6 to 9 p.m. Friday, June 24, at the Performance Space in La Tienda in Eldorado. Joe West, Joey Wilson and Laurianne Florentino are performing. The suggested donation is $20. There will be a cash bar as well as contests for the best quiche, deviled eggs and egg salad.

The invitation encourages guests to “come shake a tail feather.”