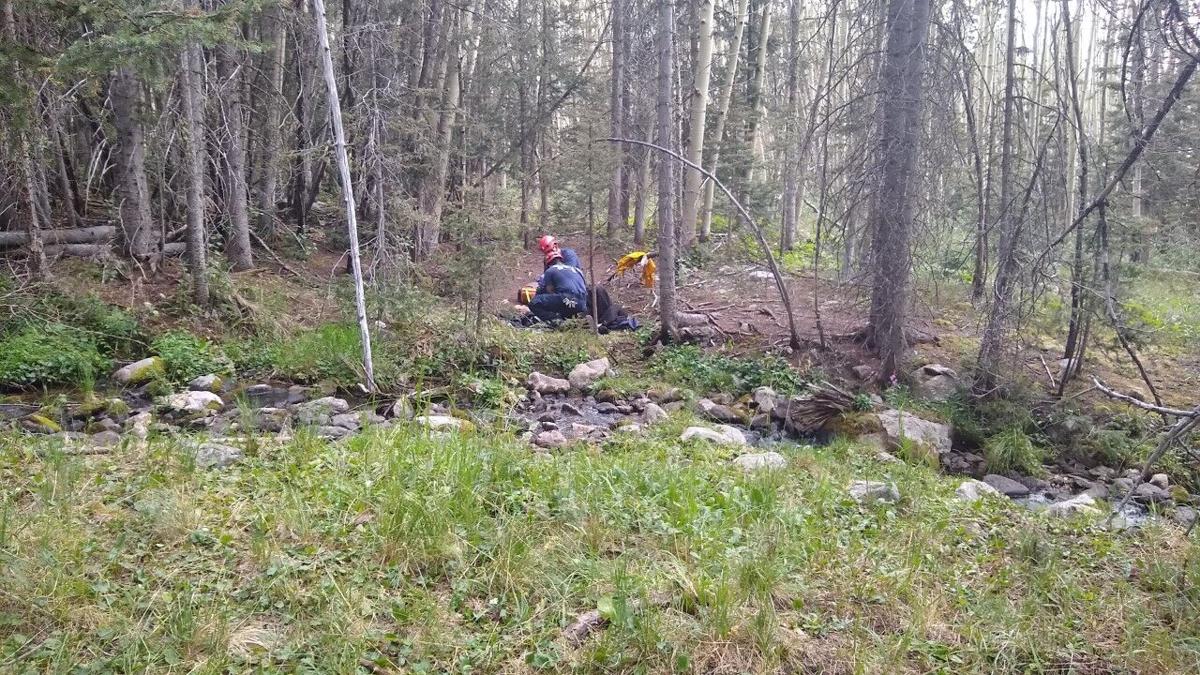 Search and rescue team members give medical aid Sunday to a man who had been lost in Santa Fe National Forest for nearly two weeks. John Utsey, an educator at Santa Fe Prep, is credited with finding the missing hiker and leading search teams to his whereabouts. The rescued man said he had been lost in the forest since Aug. 3. 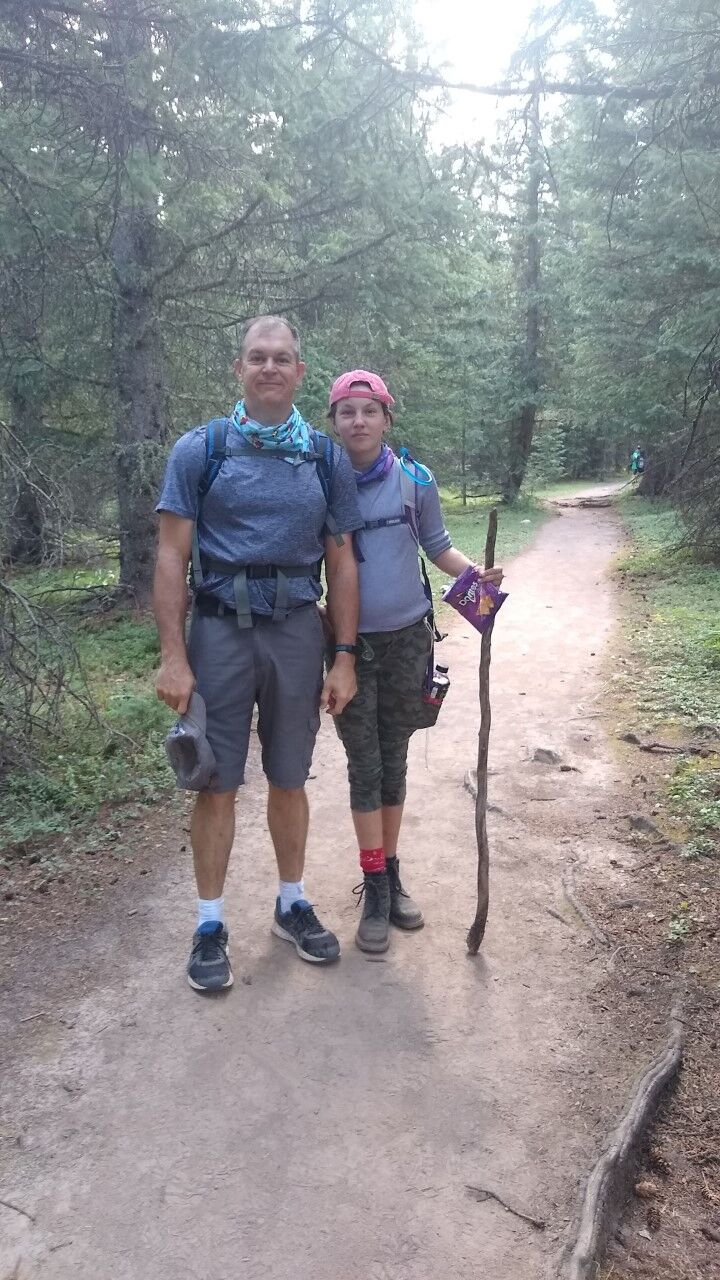 John Utsey is credited with finding a missing hiker and leading search teams to his whereabouts in Santa Fe National Forest over the weekend. Utsey's daughter, Jocelyn, was with him when he found the man, who said he had been lost in the forest since Aug. 3.

Search and rescue team members give medical aid Sunday to a man who had been lost in Santa Fe National Forest for nearly two weeks. John Utsey, an educator at Santa Fe Prep, is credited with finding the missing hiker and leading search teams to his whereabouts. The rescued man said he had been lost in the forest since Aug. 3.

John Utsey is credited with finding a missing hiker and leading search teams to his whereabouts in Santa Fe National Forest over the weekend. Utsey's daughter, Jocelyn, was with him when he found the man, who said he had been lost in the forest since Aug. 3.

A Santa Fe Prep educator is credited with finding a hiker who’d been missing for nearly two weeks and leading search teams to the man’s whereabouts in Santa Fe National Forest over the weekend.

John Utsey, 47, was heading back down the Winsor Trail with his two children on a long Saturday hike when he realized his daughter, Jocelyn, had moved far ahead of him and his son, Jasper.

So Utsey used his U.S. Marine voice — fine-tuned by six years of training as a combat engineer and data communications specialist — to call to her. Jocelyn stopped and turned around.

That’s when Utsey heard another voice — a man’s — call out in response from somewhere far off.

Utsey, who as a Marine was trained to never leave a man behind, sensed something was amiss. So he and his children hiked through some off-trail brush and engaged in a “call and response” with the man, whom the Utseys found on the ground near a creek, some 400-plus yards off the Winsor Trail and a couple of miles from the trailhead.

“We got to where we could see him in a clearing,” Utsey said Tuesday. “He couldn’t move or get up. I asked, ‘Are you injured?’ and he said, ‘I can’t move.’

“It wasn’t until later I realized how delirious he was,” said Utsey, director of technology at Santa Fe Prep, where Jocelyn is about to enter seventh grade. “He was scruffy and ragged-looking.”

The man, who has not yet been identified by authorities, was hospitalized at Christus St. Vincent Regional Medical Center. Hospital spokesman Arturo Delgado said the facility does not release medical information on its patients.

With some 12 or 13 miles of hiking behind him, Utsey said he did not think he could carry the man and safely get his kids out at the same time. So he walked down the trail to where he could get cell service and dialed 911.

Search and rescue teams from the Santa Fe Fire Department showed up shortly thereafter, and Utsey gave them directions to the man’s whereabouts before heading home.

Still, those searchers did not get to the man until Sunday afternoon, when Utsey lead them to the spot after their Saturday search was unsuccessful.

Capt. Nathan Garcia of the Santa Fe Fire Department said search crews worked their way up and down the creek Utsey described and called out to the man but did not get a response. Other hikers the team encountered on the trail said they knew nothing about the man’s whereabouts.

He said the first search was called off around 10 p.m. Saturday.

“We searched as best as we could and called out,” Garcia said. “We did not get any type of response. I don’t know if we didn’t hear him or he didn’t hear us.”

Utsey said he received a call from state police late Saturday asking for more details of the man’s whereabouts. Utsey said he wondered if the man somehow “got enough strength to get out and move. Then I thought, that guy was in such rough shape I can’t believe he left.”

Utsey wanted to see for himself, so he went back to the scene Sunday morning and found the man again.

He gave him some water and beef jerky and said he would be back with help.

Following another 911 call, he led the fire department crew members to the man. As they built a fire and provided medical care for the man — who told Utsey he could not sleep at night because of the cold — Utsey returned home.

Jocelyn Utsey, 12, said she believed her father’s booming voice might have been the first one the missing man had heard in days, despite the fact the trail was covered with hikers Saturday.

Her 10-year-old brother, Jasper, said when he gave the man a power drink and some food, the hiker said, “Thank you, young man.”

“He was very polite,” said Jasper, a student at Atalaya Elementary School.

Jasper Utsey said the man told them he had been in the forest for 20 days. Garcia said the man said he got lost on a day hike Aug. 3. He said the man, in his 50s, had an underlying back condition that stymied efforts to find his way out of the wilderness once he became disoriented.

Garcia said the missing hiker was dressed in layers, which probably helped save his life.

“If Mr. Utsey had not found him, we might never have known he was there,” Garcia said.

John Utsey said he still recalls a ROTC crew hike into the wilds of Colorado some 30 years ago when he fell ill with elevation sickness and pneumonia — potential killers in a wilderness environment. Utsey said the adult chaperone on that excursion, a retired Marine officer named George Franklin, ran across a valley and over a ridge to catch up to a pair of men packing horses out to convince them to take the boy out on horseback.

“I truly believe I would not have made it out of there without Maj. George Franklin,” Utsey recalled. “I guess I feel I owe something back.”

Jasper Utsey said he’s proud of his father. And while he might have a good story to tell when school begins Thursday, he’s not sure how well it will play with his classmates.

I felt it was important to add a little advice to this conversation. I've lived here all my life and I when I hike alone I wear a whistle around my neck to make a loud sound if needed. I always hike where there are plenty of people.

I've been hiking that area my entire life. When I am alone with my dogs I always have a whistle around my neck to make a loud noise if needed. I am happy for the man saved, but disappointed in the professional rescue effort.

There is a flaw in the calculation, in that the educator did not carry the person in distress to safety. This is a mistake. It is wrong to leave a person alone in distress. A real hero would carry the person on their back to the car and to the hospital. This story is a partial failure.

Well Negative Nicky, I'll bet the injured man is quite happy with the outcome.

This comment is super tacky. The man used his best judgement, and he did what he could. It's easy to say what should have happened from the comfort of your own home, but you weren't there. Quit judging and get a life.

This man went well above and beyond. He made a calculated choice to keep his children and himself safe after a long hike while feeding and comforting the man before he left to get help. What is troubling is the rescue team's inability to locate the man on the first attempt--not the fact that this almost 50 yo man with two children did not carry the lost hiker down the mtn.

John Utsey and his "loud family" certainly saved the day. How wonderful that he cared enough to lead the rescue team to this man on the following day. Also a lesson for us all to let people know your route and estimated time of return if you are hiking alone

This is one for Outside Magazine

Amazing story with a fortuitous ending. Where abouts was it on Winsor? That trail stretches 23 miles.

Patience and love are rewarded