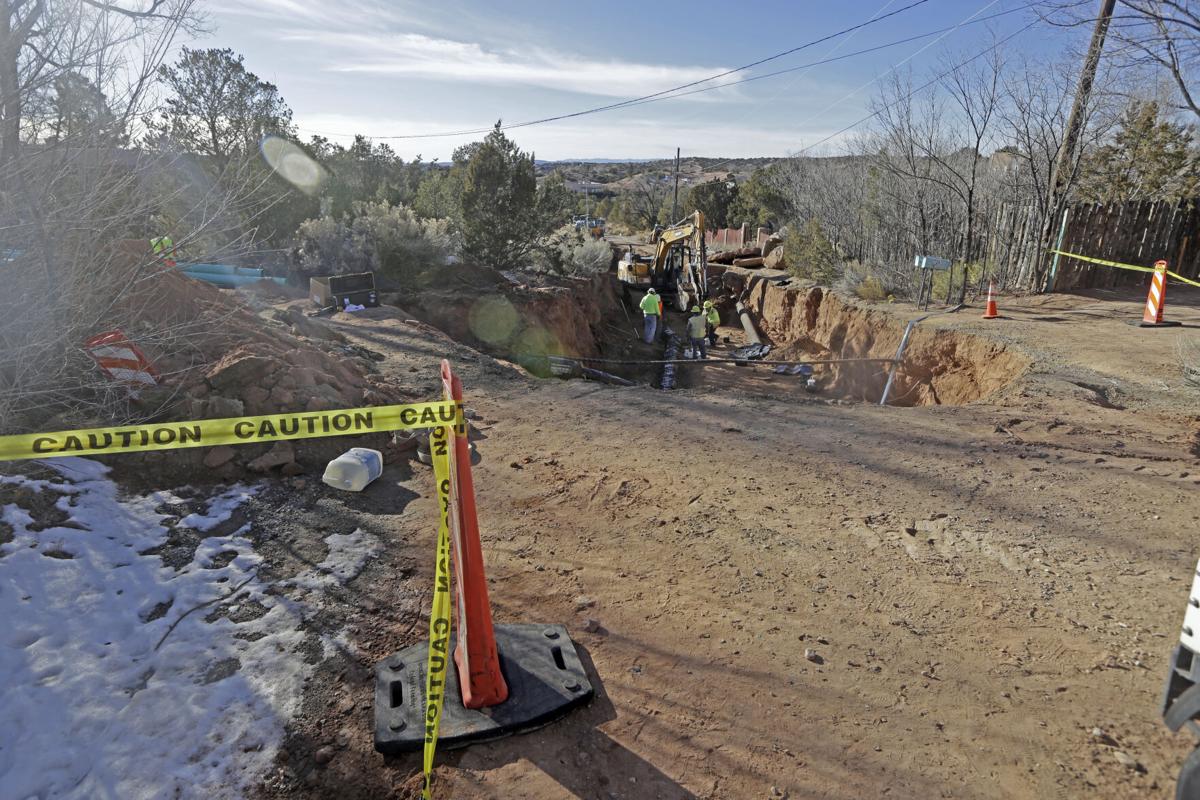 Contractors make repairs Thursday at Piñon and Juniper drives in Santa Fe after a water pipe broke early Wednesday, washing out the road and leaving residents without water. On the damage the break caused, the solution is still being assessed. 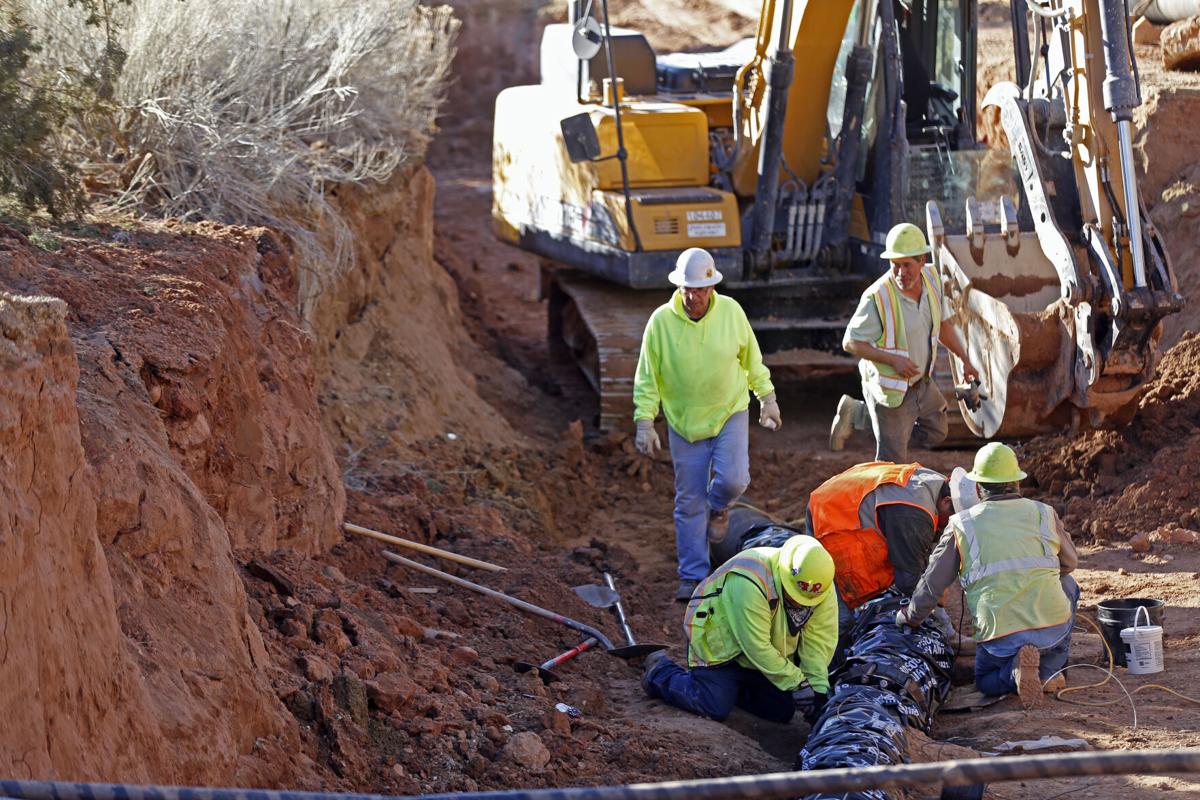 Contractors make repairs Thursday at Piñon and Juniper drives in Santa Fe where an early Wednesday water line break washed out the road and left residents without water.

A resident of Juniper Drive woke up Wednesday morning to a shocking scene — the ground near her home had been stripped away and swallowed by a sinkhole that emerged following a water main break earlier that morning.

“We walked out of the house on yesterday morning, and there was no ground behind our cars,” said Peri Marr. “I guess it can happen everywhere, but I’m sure we’ll never see one in person bigger than this.”

Beyond her driveway was a damaged Juniper Drive, now with a miniature canyon created by the broken water pipe.

Marr said the eroded landscape stretched nearly 60 yards. She and other neighbors on her east-side street and Piñon Drive are expecting to remain without water until at least Saturday morning.

City officials say the sinkhole was formed after a water main broke early Wednesday. The city sent a text message alert at 3:21 a.m. notifying people of the issue and stating water service would be disrupted.

Public Utilities Director Shannon Jones said city crews have been working around the clock to fix the issue.

“It did wash out part of Juniper Lane, but we did get it isolated,” he said. “Ultimately, there were three water lines, one of them leaked, but then the damage of the erosion caused the other two to fail.”

Jones said crews hoped the first pipe would be reinstalled Thursday night, with the other two completed by Saturday morning. As for the damage the break caused, that solution is still being assessed.

“There were erosion issues down the road, including driveways and some landscaping, and I do believe that mud and water did enter into a few homes,” he said. “I know that all that is being assessed and, again, we’re taking it one issue at a time.”

Marr said city employees had been kind amid the chaos of the situation, but the dirt road in front of her home had been washed out.

Filling the chasm left by the sinkhole, she said, will take plenty of work.

“When we’re getting ready to go to work, I go, ‘Where’s all the dirt?’ ” Marr said. “I’m sure some of it washed out, but they must need to bring in just tons of dirt to fill that hole.”

It is not the first water main break to occur in the city in recent weeks. On Dec. 24, a pipe broke on Avenida San Marcos. Two weeks later, a water leak occurred in the Hillside Avenue area, according to messages from Alert Santa Fe.

Jones said crews are working as hard as they can to resolve the issue.

“We know it’s an inconvenience for the residents in the area, and we’re working around-the-clock to get it put back in and get service restored,” he said.

Surprised someone hasn't blamed the governor for the pipe breaking..

No worries. I'm sure someone will make this a political issue. Monday morning quarterbacks are in abundance here

Scott - a break like this didn’t happen overnight. It takes years for a waterline to fail.

This is a political issue, nation wide, that has been brewing for the past 20-30 years. If municipalities don’t track, maintain and replace infrastructure in a methodical fashion, this is the end result.

There are two reports I recommend folks read that were put out by the AWWA and the EPA:

Dawn of the Replacement Era; and

I think if you do research, you’ll find that infrastructure has been ignored nation wide for decades. Water and sewer lines are coming to the end of their service lives nation wide. This incident is a local example of that.

I’m not taking shots at anybody here, so please don’t get me wrong.

Ignoring the problem for decades was a political decision.

If the problem continues to be ignored, that’s a political decision.

If adequate funding, direction and leadership is mustered to address and resolve the problem, that’s a political decision, too.

Just my two cents, which after inflation and taxes, is likely worth half a cent.

I hope my post is taken with the same consideration and thoughtfulness that I tried to put into it.

Fortunately our house is higher than the street and didn't get flooded but, our driveway has been blocked and wirkers helped us get a vehicle out. No water and city brought us drinking water last evening. They havent let us know a timeline for finishing the job. Also, itthe break is on Juniper Drive, not Juniper Lane!

Because the main failure is on the before the meters.

The real question is, does the City have any kind of plan to systematically upgrade old water lines? Or, is it simply reacting to each new crisis as it arises? Sounds like the latter. That is about what I would expect from the Webber administration.

Actually, almost all city water systems are subject to these type of failures. Not easy to predict even with cameras and NDT.

I had heard some time back that the city was planning to address/ replace the old water main lines around the older parts of town. City employees went out and marked areas with paint stating that a plan was being developed. Not sure that any effort actually started.