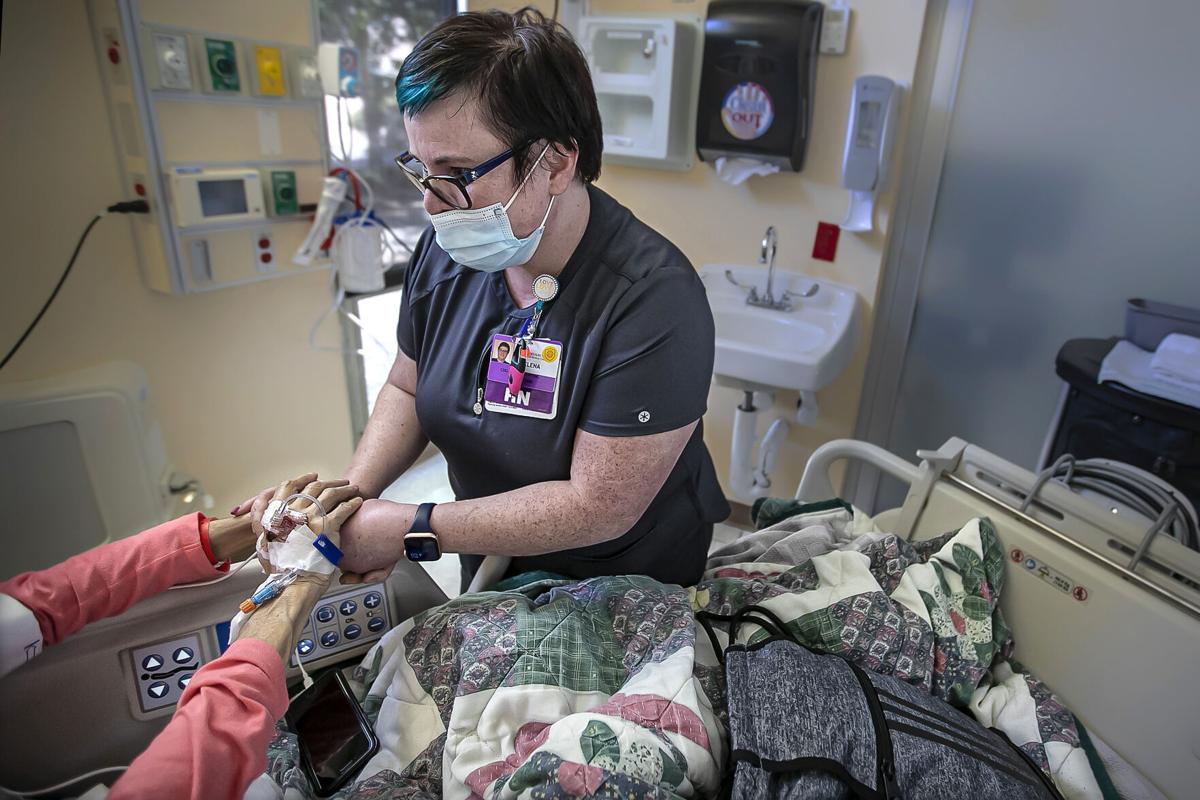 Traveling intensive care nurse Yelena Yielding says goodbye Wednesday to one of her patients being transferred out of the ICU at Christus St. Vincent Regional Medical Center. Christus is among many hospitals that recruit traveling nurses from out of state because of the high demand for professionals. 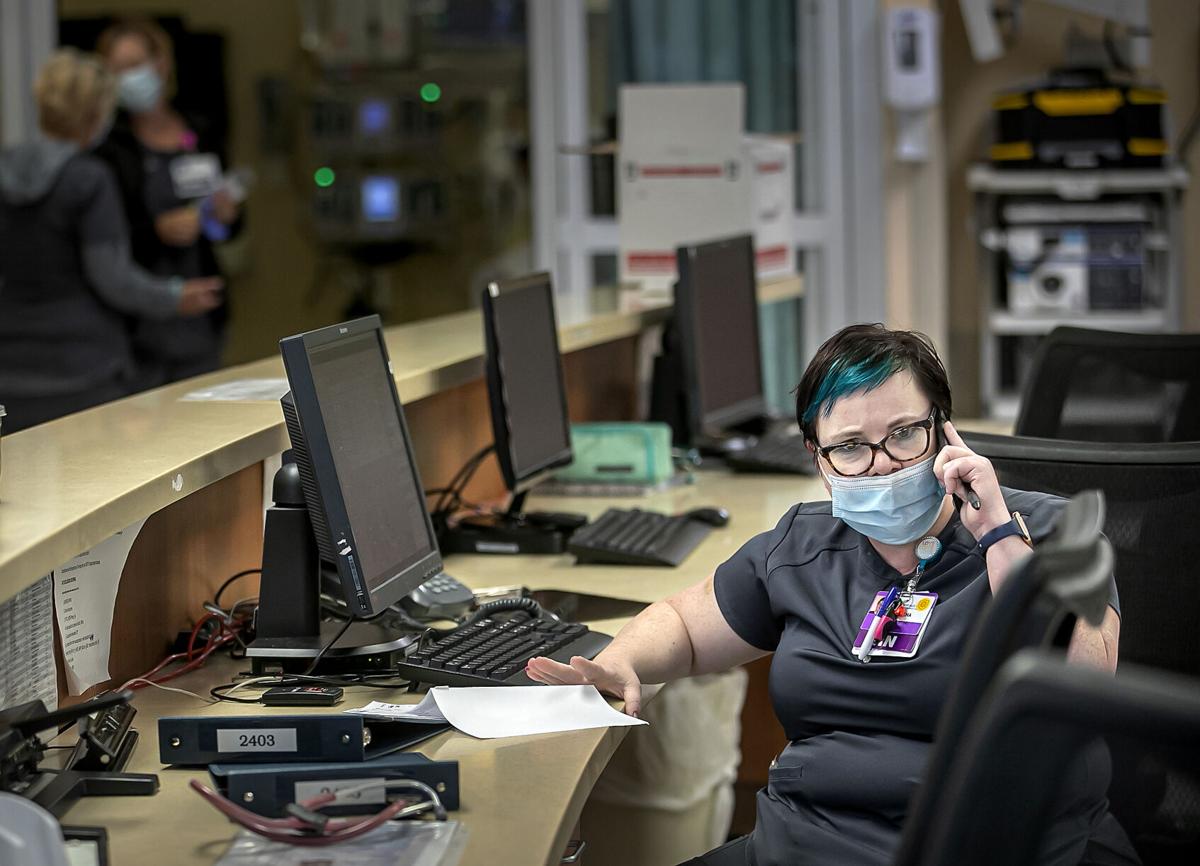 Intensive care nurse Yelena Yielding calls in a report Wednesday for one of her patients being transferred out of the ICU at Christus St. Vincent Regional Medical Center. 'There's a whole lot more [nurse] travelers now that COVID happened,' Yielding says.

Perhaps there has never been a better — or worse — time to be a hospital nurse.

Demand is so high in New Mexico and nationwide that some hospitals are paying traveling nurse agencies $200 an hour or more for temporary use of one of their people. The money is good, but the coronavirus pandemic has made the work more intense than it already was, with long hours and burnout as a result.

And while New Mexico hospitals have an unwritten rule not to raid each other for staffers, New Mexico Hospital Association CEO and President Troy Clark said nurses in other states generally are “fair game.” Those states in turn come after New Mexico nurses.

Yelena Yielding said she has spent a few years as a traveling nurse, and it’s “the first time I’ve been appropriately compensated for the work I do.” She declined to say what her hourly pay is, but an allowance for housing and food is included.

Yielding has found a measure of peace in her profession by singing to patients (“Bridge Over Troubled Water” and “Me and Bobby McGee” are favorites), doing yoga combined with meditation and by paying attention to her breathing patterns.

At her current hospital, Christus St. Vincent Regional Medical Center, she said she loves the staff “serenity room,” where she can get away for a moment.

She also likes the hospital’s “5-10 Rule,” which calls for staffers to make eye contact when within 10 feet of anyone at the hospital, and to speak to them when within 5 feet. It’s a way of asking staffers to treat each other, patients and visitors courteously.

“It’s been a long couple of years,” said Yielding, 43, who has been at Christus St. Vincent only three weeks after a stint at University of New Mexico Hospital in Albuquerque. In a text, she wrote the coronavirus pandemic has resulted in patients dying without family beside them, creating “a world of sadness [and] death” for nurses.

The need for nurses also has empowered some to move about and make more money. “There’s a whole lot more [nurse] travelers now that COVID happened,” Yielding said.

Clark said that before the pandemic, hospitals generally paid travel nurse companies $70 to $80 an hour for a nurse. He said New Mexico hospitals are paying about $160 an hour for travel nurses now under contract. Two weeks ago, the rate went up to $200 to $210 an hour, he said, because of the ongoing fight with the disease and major nurse shortages in Texas, Florida and other states.

Clark said his association submitted a request last week to Gov. Michelle Lujan Grisham for money to help hospitals through this period. Over the past 60 days alone, he said, increased costs of $34.1 million have hit hospitals for traveling nurses, overtime, extra shifts and retention bonuses.

Those costs were for nurses and other medical personnel, but not physicians.

He said hospitals also are concerned about Lujan Grisham’s public health order requiring hospital employees to have a coronavirus vaccination as of Friday. Some traveling nurses, he said, signed contracts before that order was made, so hospitals have requested time to deal with that nuance.

Nora Meyers Sackett, a spokeswoman for the governor, didn’t directly address the requests. But she wrote in an email: “Staffing challenges are being seen in health care settings in every state in the country right now, largely due to burnout caused by the escalating COVID-19 pandemic — the best tool for changing that is getting people vaccinated, including those working in high-risk settings.”

Dr. Jason Mitchell, chief medical officer at Albuquerque-based Presbyterian Healthcare Services, said this month that New Mexico hospitals will “pull every lever possible to bring in the people to care for our patients.”

Mitchell didn’t burnish the situation, acknowledging the work is tough.

“It means that people are working longer hours, they’re working more shifts,” he said, acknowledging hospitals will “recruit people from out of state. We’ve done a lot of work on that.”

Clark said it’s not just coronavirus patients who are swamping hospitals. It’s also people with chronic conditions such as diabetes and lung disease who have delayed their care during the pandemic and now need significant medical help.

He said 12.2 percent of the state’s hospital nurses are now from traveling nurse agencies.

Christus St. Vincent Chief Nurse Executive Monica Leyba said her hospital is up to about 20 percent, a rate that she saw three or four years ago, but never regularly.

Beginning in November, Leyba said, “we saw a lot of our nurses leaving.” Some of the reasons, she said, included early retirement, to be with family and to care for children attending school from home.

“We have lost nurses to travel assignments because they’re giving them higher rates,” she said. “It is very stressful because we want to keep our workforce. It keeps me up at night.”

Many travel nurses are on 13-week contracts, Leyba said, so there is constant churn. Another source of nurses, international workers, are hired on 30-month contracts.

Leyba said her hospital created a nurse recruiter role a few years ago to help bring in and retain nurses.

The person who holds that job and also directs the hospital’s critical care unit, Wayne Littlejohn, said the competition is fierce.

Nurses “get contacted a lot by agencies, that’s for sure,” Littlejohn said. “Everybody competes for the same nurses.”

Terri Tewart, a dean at Santa Fe Community College, said her nursing faculty members and other teachers in health fields are being drawn to hospitals by signing bonuses of $10,000 or considerably more.

Tewart said the college enrolls about 100 students who aim to be licensed practical nurses or registered nurses. She said it’s important that nursing students understand the rewards of nursing and the toll the profession takes.

A survey reported this year by Trusted Health found about two-thirds of nurses felt their mental health and well-being were not a priority of the health care industry.

Clark of the state hospital association said a nursing shortage has troubled New Mexico for years. A state Department of Workforce Solutions report last year estimated that over the next 10 years, there will be 1,240 annual job openings for nurses. As of 2019, about 17,350 registered nurses made up more than one-third of the state’s health care jobs.

A new University of New Mexico Health Sciences Center study found demand for registered nurses here at more than 17,000 and supply a bit below 16,000. A governor’s task force last year said New Mexico would have the worst registered nurse shortage in the nation by 2030.

Nationwide, there aren’t adequate numbers of new nurses to replace those who are leaving, either.

Juliann Sebastian, dean of the University of Nebraska Medical Center College of Nursing, said, “Nurses, and I think all health professionals, are exhausted.” The pandemic has revealed the importance, Sebastian said, of having adequate numbers of nurses and nurses with the kind of training to care for patients who are severely ill from a pandemic.

“And so it’s a difficult time right now,” said Sebastian, who added the best approach is hospital collaboration rather than competition.

Clark said the state’s hospitals have focused on collaboration. For instance, he said, they have helped each other by taking on patients from other hospitals to provide the level of care those patients need.

And, he said, you won’t have one New Mexico hospital trying to recruit nurses in another hospital’s parking lot.

I am curious why a nurse would wear her mask inappropriately? The nose MUST be covered.