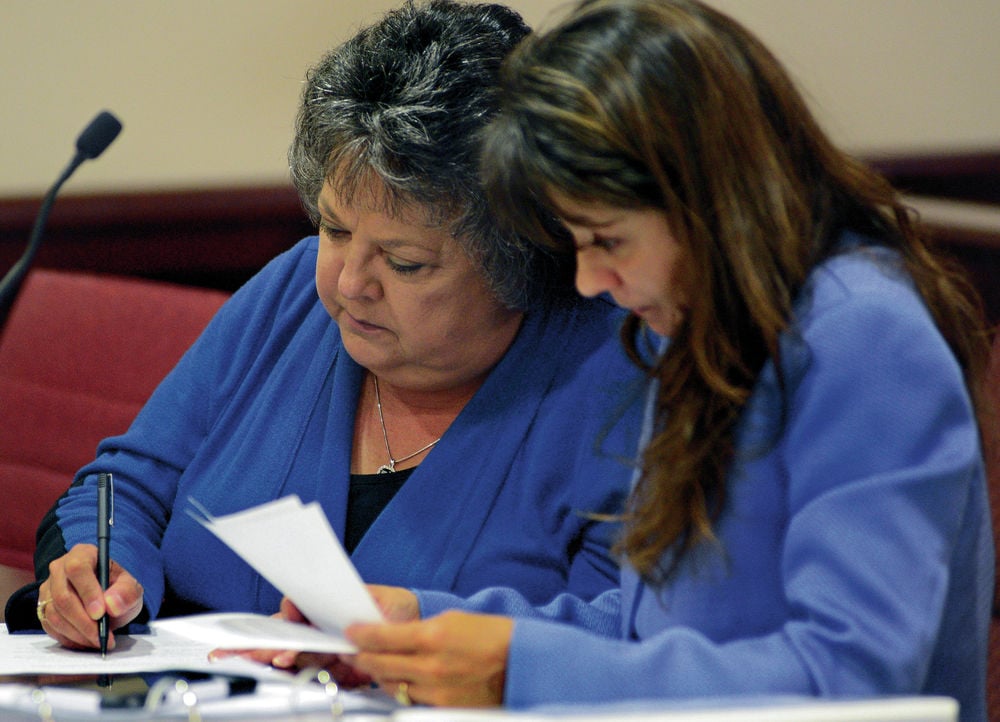 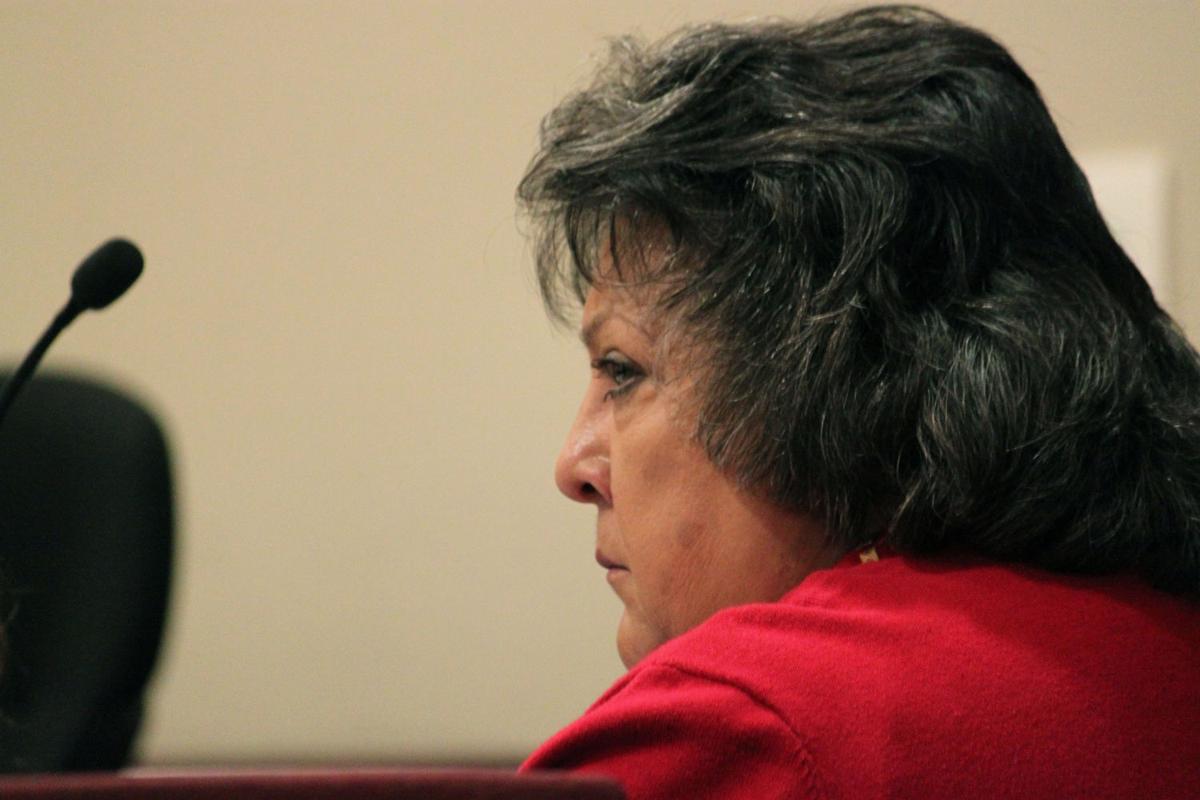 Dianna Duran, who resigned in her second term as New Mexico’s secretary of state after admitting she embezzled money from campaign donors to cover gambling debts, will be booked into the Santa Fe County jail on Friday to begin serving a 30-day sentence.

Duran on Wednesday sent word through her lawyer to state District Judge T. Glenn Ellington that she would accept the jail sentence and a series of other punishments he outlined earlier this week.

Her decision brings resolution to a case that had shocked political insiders as much as the public across New Mexico ever since Attorney General Hector Balderas on Aug. 28 charged Duran with dozens of counts of fraud, embezzlement, money laundering and campaign finance violations.

On Friday, intake officials at the Santa Fe County Adult Detention Facility will decide whether to place the 60-year-old into a segregated unit or into the female general population unit with other inmates, county spokeswoman Kristine Mihelcic said. Like other inmates, Mihelcic said, Duran will be placed into a standard 6-by-8-foot cell. She will wear a khaki uniform and be served three meals a day.

It’s a major life change for Duran, a Tularosa resident who rose to one of the state’s top elected offices after serving as Otero County Clerk and then as a state senator. In 2010, she became the first Republican to head the Secretary of State’s Office since 1929. Yet the criminal case brought out contradictions in a public official who had inveighed against public corruption and voter fraud.

“The word ‘scandal’ comes to mind any time you think of that office, and I’d like for us to have a scandal-free Secretary of State’s Office,” Duran told Heath Haussamen, a Las Cruces journalist, during her 2010 campaign. “Our elections should be above reproach.”

Duran’s case also prompted debate about whether Duran’s position of power caused the state’s criminal justice system to treat her differently than less powerful defendants. Duran ended up pleading guilty to six counts — two felonies and four misdemeanors — in a plea deal in which Balderas’ prosecutors dropped 59 charges and did not ask for any jail time.

Asked why the Attorney General’s Office argued at Duran’s Dec. 14 sentencing hearing that she should be placed on probation without any incarceration, Balderas told The New Mexican through a spokesman that his office “investigated, charged and negotiated a resolution that contemplated the Court using its discretion to impose up to 8 1/2 years of incarceration. Our recommendation was only a baseline and gave the Court full discretion to sentence up to 8 1/2 years. We must respect the Court’s ability to exercise judicial discretion.”

However, it is not uncommon for prosecutors to argue for jail time when the law allows for it.

In addition to jail time, Ellington fined Duran $14,000, ordered her to pay back $13,866 to campaign contributors and to personally deliver letters of apology to them.

Ellington said during Monday’s sentencing hearing that Duran’s punishment should account for the fact that she violated the public’s right to know the origin of her campaign money in submitting a campaign report with false information on it and making an illegal campaign expenditure. After noting that New Mexico has had a number of public officials in jail on public corruption counts, Ellington said those officials “slipped back into anonymity” after serving time. Duran’s letters and a series of required public appearances, Ellington said, will help restore broken trust that Duran brought on her office, whose duties include overseeing elections.

Duran must publish apologies for her crimes in six newspapers across the state. Duran must also perform 2,000 hours of community service at charities and speak at schools and civic organizations across the state about her rise and fall because of her lawbreaking.

In an item that appeared Wednesday in The Las Cruces Bulletin, a Southern New Mexico weekly, Duran wrote that “I cannot begin to express how deeply sorry I am for my transgressions and the damage I caused to the public’s trust in public officials.

“I only hope the people of the state of New Mexico will move forward and someday forgive my actions which were not borne out of greed but rather a result of very tragic personal circumstances which led to some very poor decisions on my part,” Duran said.

Her lawyer, Erlinda Johnson, had told the judge that Duran’s crimes began after unspecified tragedies in her family and described Duran as a gambling addict who was preyed upon by casinos that offered her lines of credit to keep her hooked. “Many of your statements follow a pattern or rationalization and excuses I hear from many addicts,” Ellington told Duran at Monday’s hearing. “It is very similar.”

In her published apology, Duran wrote, “I have not made excuses for my actions. I have simply tried to explain the circumstances which led to my transgressions. I only hope the people of this great state find it within themselves to forgive me.”

After serving her jail sentence, Duran will be on supervised release, during which she will be electronically monitored for at least two years to dissuade her from entering gambling establishments such as casinos or racetracks.

Because the judge added jail time, Duran had the option of rejecting the sentence. Had she done so, all 65 charges against her would have been reinstated and the case would have started anew.

After Duran accepted the sentence Wednesday, nearly four months she was charged, her lawyer sent reporters a brief statement that said: “With the same resolve with which Ms. Duran swiftly accepted responsibility, she will accept the sentence of the court.”

Yet the case did not end swiftly enough for politicos on both sides of the aisle, newspaper editorial boards and members of the public whose calls for her immediate resignation Duran ignored. For two months, Duran remained in office after being charged with violating the very campaign laws she was responsible for administering. Her reluctance to quit cost taxpayers at least $17,000 to help fund a legislative impeachment process.

An order signed Wednesday by Ellington requires that Duran be remanded into the custody of the jail at 9 a.m. Friday. Her incarceration there ends at 9 a.m. Jan. 17, after which she will spend five years on probation. Before her release, the Adult Probation and Parole Office will fit her with a GPS tracking device to ensure she does not enter any gambling establishments such as casinos and racetracks. After two years, the judge said at Duran’s sentencing, she may request to have the monitor removed.

Ellington denied Duran’s request during Monday’s hearing to delay the start of her jail sentence until after the upcoming holidays.

“Almost without exception,” the judge said, “every adult defendant that appears before this court has a family.”

Correction: A previous version of this story incorrectly stated that Duran was indicted, she was charged through a criminal information.

Do you think former Secretary of State Dianna Duran received an appropriate sentence for the fraud charges to which she pleaded guilty?

A state District Court judge sentenced Duran to 30 days in prison, five years of probation and 2,000 hours of community service. He also fined her $14,000 and ordered her to pay another $13,866 in restitution.

Former New Mexico Secretary of State Dianna Duran was escorted by police when she turned herself in to the Santa Fe County jail Friday to begin her 30-day sentence for illegally using money from her election fund to feed her gambling addiction.

District judge has reputation for doing right thing, albeit on own terms

T. Glenn Ellington has been in the news a lot lately, not just for sentencing former Secretary of State Dianna Duran, but for other cases where he pushed back against the prosecution on what he felt were soft or inadequate plea deals.

Dianna Duran wants a judge to drop the condition requiring her to speak four times a month to schools and civic organizations.

You people at the New Mexican are bastards. If you have something to drag up after 33 years, it would be good to prove you are journalists and get the facts straight. Your reference to Herman Grace is full of lies and inaccuracies. Reagan came into office and decideded to get rid of Johnson's War on Poverty. He sent FBI to investigate and a few minor figures were targeted in N.M. Herman Grace, who is loved far and wide by his family and fellow Santa Feans was caught in trap and because he didn't have $200,000 to hire legal counsel, he plead guilty to OBSTRUCTION OF JUSTICE. He served 12 months at La Tuna and was literally destroyed. This man had the character of a prince. He ran a business in Santa Fe for 30 years before his death in 2012. When you write something about someone, for heaven's sake, get it correct or get out of the newspaper business.

30 days in jail and an apology and she gets to keep her pension. If a Mexican stole a radio from Walmart he'd get a stiffer sentence. Our justice system has nothing but admiration for white-collar criminals.

A sad day for NM that we must send another high office holder to jail for corruption.

If addiction truly was the cause of Duran's behavior, then this sentence seems to fit the crime. However, if the approximately $400,000 she withdrew from casino ATMs over two years went to pursuits other than gambling, then she got off with a slap on the wrist and restorative punishment is off the mark. We may never know. Just sayin'

Another unknown variable is the role Duran's husband played. I've known her since her senate days and the two were virtually inseparable. He must have witnessed and/or participated in the embezzlement or, worse, also has a gambling issue.

It puzzles me that no one has asked what the husband's role was, but something tells me that time will eventually reveal the full story...it almost always does.