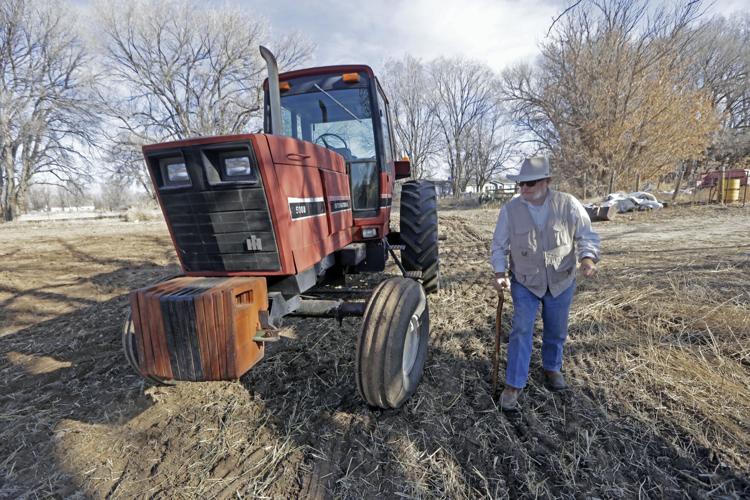 Paul Skrak, owner of Hidalgo Farms in Peña Blanca, warms up his tractor Thursday to prepare one of his fields for laser leveling. Skrak is adopting new growing methods to withstand drought. 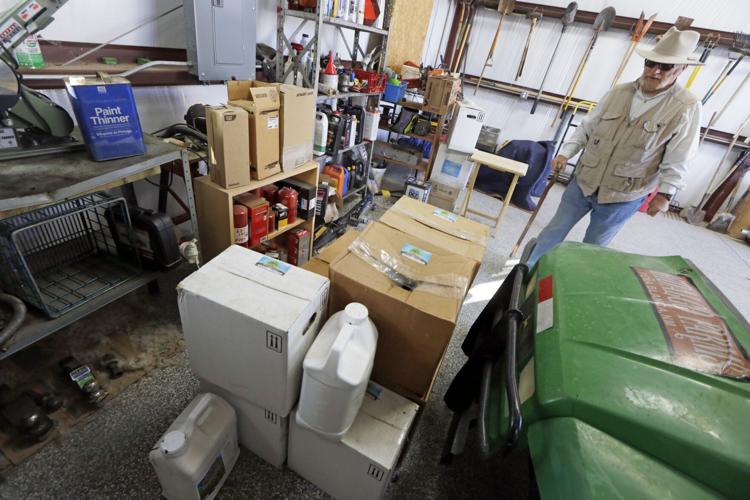 Paul Skrak of Hidalgo Farms looks for his Hydretain, a soil additive he uses to retain moisture and draw it from the atmosphere. The state and the irrigation district should subsidize farmers in buying this soil enhancer rather than paying them to fallow their fields, Skrak said, arguing it will conserve water and allow growers to keep operating. 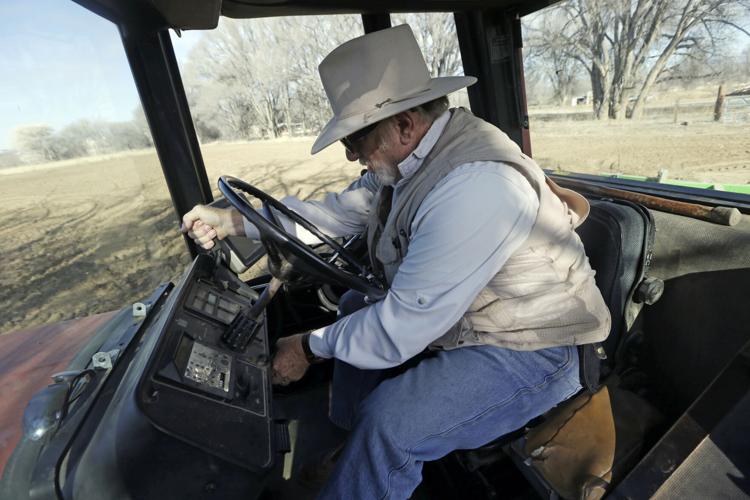 Paul Skrak, owner of Hidalgo Farms in Peña Blanca, warms up his tractor Thursday to prepare one of his fields for laser leveling. Skrak is adopting new growing methods to withstand drought.

Paul Skrak of Hidalgo Farms looks for his Hydretain, a soil additive he uses to retain moisture and draw it from the atmosphere. The state and the irrigation district should subsidize farmers in buying this soil enhancer rather than paying them to fallow their fields, Skrak said, arguing it will conserve water and allow growers to keep operating.

A couple of years ago, Paul Skrak decided to explore different growing methods that might help his crops better withstand the seemingly endless drought.

On the advice of a consultant, the Peña Blanca farmer began using cover crops, both to shade the soil from the sun and loosen it to allow water to penetrate better.

He plows as little as possible on his 55-acre Hidalgo Farms, and sometimes not at all, to preserve the vital topsoil.

He began shifting to more drought-resistant crops, such as soybeans and Sudan grass, and away from thirstier alfalfa. And whenever possible, he uses drip irrigation instead of the more water-intensive flood irrigation typically used in the Middle Rio Grande Valley.

More recently, Skrak started applying a soil enhancer called Hydretain, which is said to cut irrigation in half by enabling plants to more effectively absorb water.

Skrak has become a strong advocate of Hydretain. The state and the irrigation district should subsidize farmers in buying this soil enhancer rather than paying them to fallow their fields, Skrak said, arguing it will conserve water and allow growers to keep operating.

If farmers apply Hydretain and other water-saving techniques during a dry season, they’ll still get a smaller harvest, but that’s better than nothing, Skrak said.

None of what Skrak has adopted is new. Hydretain has been on the market for about seven years, and the growing techniques have been around for decades.

But they are not common in the middle valley, either because growers are unaware of them or they resist using unfamiliar methods, some of which involve more work or a sizable upfront cost, said Kevin Branum, who owns Grants-based EAS Agro and has advised Skrak.

Skrak was one of the first in the valley to give the techniques a try, Branum said.

And now they’re catching on, as more farmers who were hesitant and wanted to see how well they worked are jumping on board, Branum said.

It will be imperative for growers to adopt more water-efficient farming as a changing climate causes warmer, drier weather that depletes the rivers needed for irrigation, Branum said.

Water managers on the fence

Still, the official who helps oversee the valley’s irrigation said there’s no one-size-fits-all approach to farming in a prolonged drought.

“It really depends on what we find when we’re digging into the soils,” said Jason Casuga, acting CEO and chief engineer for the Middle Rio Grande Conservancy District.

Hydretain might work well in one area but not in another, Casuga said.

And even if this product proves effective, the district couldn’t simply divert other funds to subsidize its use, Casuga said. That includes money earmarked for paying farmers about $420 per acre to not water their fields, he said.

The point of the fallowing program is to boost the amount of available water, both for irrigation and for sending downstream to pay Texas what it’s owed under a water-sharing agreement known as the Rio Grande Compact, Casuga said.

New Mexico ended 2021 owing Texas more than 100,000 acre-feet of water. An acre-foot is enough to submerge a football field in water a foot deep.

The district will discuss fallowing first with part-time growers who don’t make a living with their farms, Casuga said.

At the same time, the district’s technical experts will study how effective the methods such as cover cropping would be in the valley before recommending anything, Casuga said.

“Cover cropping could be a good thing,” Casuga said. “It just depends on the soil.”

Branum insists the proof is in the results.

In the past two years, when the district cut irrigation seasons short because of low water supply, Skrak was able to grow more than he would have otherwise, Branum said.

The use of cover crops was a big part of that, he said.

Cover crops such as radishes, turnips and wild peas help break up the hard dirt, creating little pathways with the roots that allow water to better penetrate the soil later, he said. The more absorptive soil reduces wasteful runoff and enables rainwater to seep in rather than flood the fields during heavy storms, he added.

Other types of cover crops, such as buckwheat and rye, retain the topsoil’s moisture and prevent it from becoming too hot and killing the essential microbes, he said.

All of the various cover crops are planted simultaneously to prepare the soil for growing the farmer’s cash crops such as corn, Branum said. The cover crops are cut and the main crops are then planted on the leavings, which help suppress weeds and add nutrients to the soil.

Cover crops eliminate the need for deep plowing to dig up weeds and break up the dirt, he said. Plowing isn’t taken out altogether, but it is minimized to protect the topsoil.

Cover cropping has been used farther north, such as the Española area, for more than a century but wasn’t embraced by middle valley farmers, Branum said.

Drip irrigation is slowly being adopted in the state, he said. Not long ago, it was widely believed that alfalfa couldn’t be watered this way, and now alfalfa growers in Deming are doing it.

One drawback is that drip irrigation requires a hefty upfront investment, Branum said, adding a farmer generally must have a lucrative specialty crop to recover the costs.

Meanwhile, Skrak is replacing alfalfa with a sorghum grass, which is also a livestock feed but consumes a third less water.

Skrak said he has been talking to neighboring growers about how Hydretain and the newer growing methods could benefit them as the drought drags on.

Some are receptive, but others resist the idea of changing to something like cover crops that demand more work, even if it increases the long-term health of their farms, he said.

He added: “I think a lot of farmers would rather plow like they’ve been doing for 300 years.”

A new reason for hope after more mass murders

Shy cat came out of his shell

Seniors have been overlooked in recruiting

Oven-baked fries even the kids will love