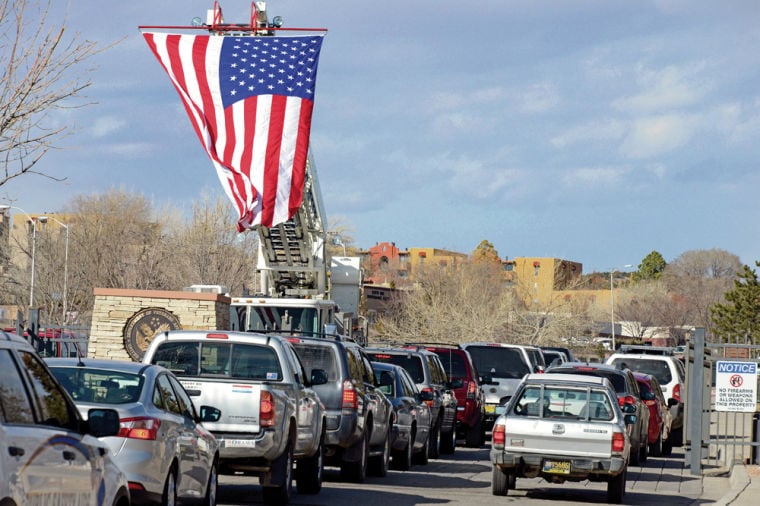 Lines of cars make their way past to the Santa Fe National Cemetery on Tuesday for the funeral of retired Marine Sgt. Eloy Tafoya. Clyde Mueller/The New Mexican 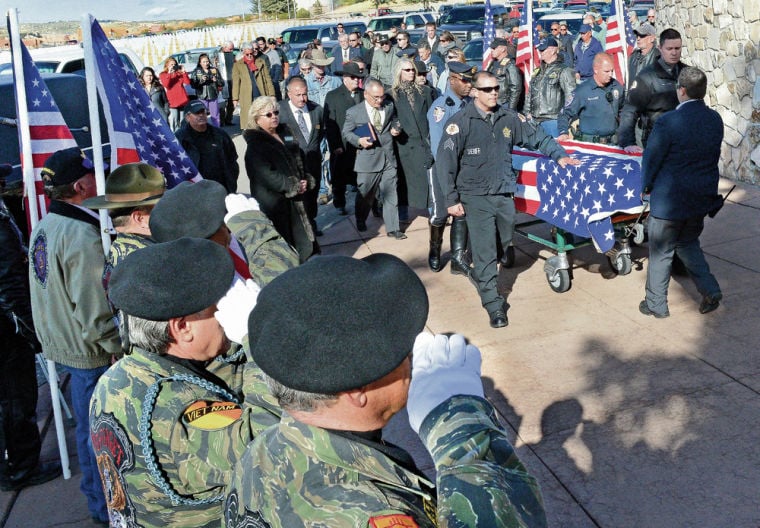 Dozens attend a funeral service Tuesday for retired Marine Sgt. Eloy Tafoya at the Santa Fe National Cemetery. Tafoya, 60, was described by the few who knew him as a reclusive man, and he died alone in his home from a self-inflicted gunshot wound. Clyde Mueller/The New Mexican

Lines of cars make their way past to the Santa Fe National Cemetery on Tuesday for the funeral of retired Marine Sgt. Eloy Tafoya. Clyde Mueller/The New Mexican

Dozens attend a funeral service Tuesday for retired Marine Sgt. Eloy Tafoya at the Santa Fe National Cemetery. Tafoya, 60, was described by the few who knew him as a reclusive man, and he died alone in his home from a self-inflicted gunshot wound. Clyde Mueller/The New Mexican

The streets of downtown Santa Fe shut down temporarily Tuesday to make way for the funeral procession of a reclusive former Marine who died alone in his home from a self-inflicted gunshot wound.

Retired Sgt. Eloy Timothy Tafoya was described as a “loner” by the few people who knew him. But his tragic death by his own hand in a Santa Fe apartment in January struck a chord with dozens of people who gathered at the Santa Fe National Cemetery in the veteran’s honor.

The funeral itself — which included dozens of uniformed military and police personnel, a motorcycle brigade, a 21-gun salute, bagpipers from the Santa Fe Police Department and a drummer from Santa Clara Pueblo — was pulled together by people from a specialty cleaning company and a funeral home who had never heard of Tafoya until they were called to clean up after his death, which was discovered Jan. 23.

After seeing the retired Marine’s home full of a lifetime of memorabilia and realizing that Tafoya had few family or friends to observe his passing, a group of local men — Joe Chavez from Servpro, Raymond Lucero from the Rivera Family Funeral Home and several others — spent weeks arranging a ceremony they felt was fitting for a man who had served his country for 20 years.

Dozens of others, strangers to Tafoya until Tuesday, when they learned of his funeral and were touched by his story, showed up at the cemetery.

“Knowing he died alone was so upsetting,” said Taneya Vigil, wiping tears from her face as she left the ceremony.

Like most of the other people there, she hadn’t known Tafoya. But after reading about his suicide in The New Mexican on Tuesday morning, she and her husband, former Marine Cpl. Ronny Petago, who live more than two hours away on the Jicarilla Apache Reservation in Northern New Mexico, decided to attend his funeral during their trip to Santa Fe.

“In Marine boot camp, they taught us that all Marines are our brothers,” Petago said. “So I figured I owed him this.”

One attendee, Vietnam veteran Chuck Zobac, who is active in veteran suicide prevention efforts, said about 22 veterans take their own lives in the United States every day.

Eloy Timothy Tafoya was buried Tuesday, Feb. 11, at the Santa Fe National Cemetery in a formal ceremony that included the presentation of colors, a 21-gun-salute and a police escort.

Thank you, citizens of Santa Fe and others from the area and those of you from far away - many mentioned by Francisco in his post below - who honored our fallen veteran with such heart-felt passion. Special kudos to Chaplain Villegas for making this tribute possible. I am proud of, and grateful to, each one of you for giving your heart and your time to remember and honor Eloy, and truly all veterans, who made it possible for the rest of us to live as free men and women in this blessed land of opportunity we call the United States of America.

Having been in attendance to bid a formal farewell to SGT Tafoya, would like to say how proud and blessed each one of us who was there, to be part of a truly caring and compassionate Santa Fe Community who took time out of their busy lives and with such short notice to say goodbye to one of it's own. And to witness his relatives in attendance being handed Eloy's Mission Completed Medal and Memorial Flag, making the occasion that much more solomn if not more heart wrenching. And as the presiding Chaplain said; Until we Meet Again on the Other Side Eloy and thank you for your many years of service to this country. And we will meet again.

Thank you, Mr Carbajal, for sharing this important information with all of us. Blessings to all who attended and who made arrangements for this neighbor that few of us knew until he chose to leave us. Let us all be more vigilant about attending to our neighbors. And may Mr. Tafoya truly rest in peace.

God Bless you Tim Rivera, Owner, Rivera Family Funeral Home, Raymond Lucero, who was born for this service to others and Mr. Tafoya for your service to this great Country. God Bless you.

How beautiful. He is at peace, and his service to his country has been recognized and celebrated. That may have been all he really wanted in his life.