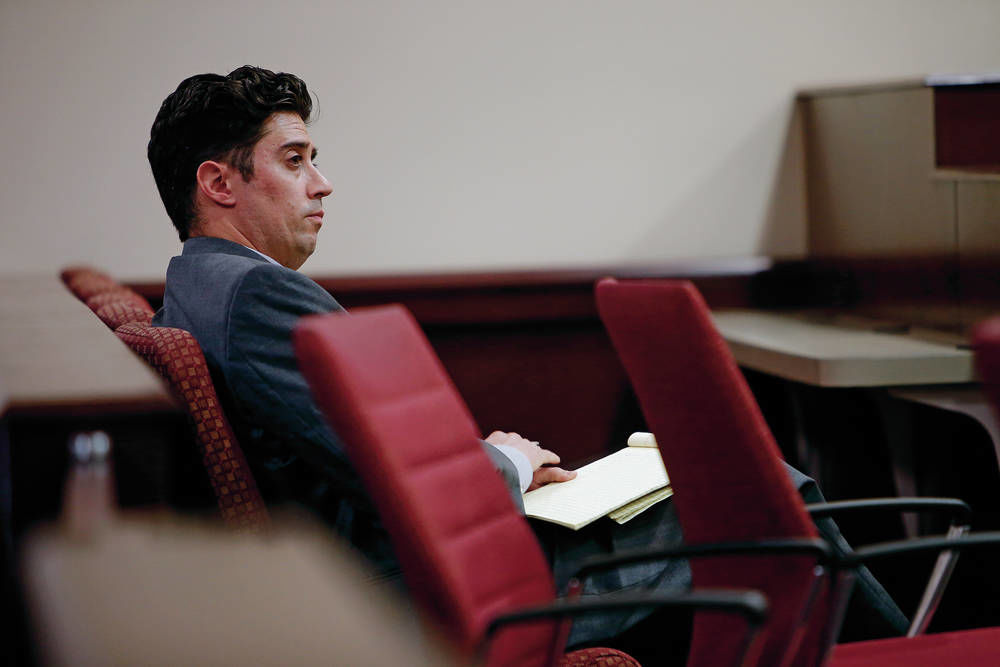 It’s fitting that an equine costars in an advertisement for congressional candidate Marco Serna. As the Santa Fe-area district attorney, Serna has established a clear-cut record in less than three years on the job.

He’s a show horse, not a workhorse.

Nothing is easier for a politician than campaigning. Serna likes to shake hands, dispense platitudes and issue position papers. This beats working for living. He’s collecting a district attorney’s salary while functioning as a professional politician.

With Serna devoting so much time to next June’s Democratic primary election, he should be delivering all-star material in his campaign.

Instead, his pronouncements are thick with atrocious grammar and a lack of self-awareness. Here’s a sampling of the candidate in his own words, presenting himself as congressional timber.

• Serna writes: “The issues that surround our community is prevalent, I felt and heard the well informed passion in the room. When it comes to New Mexico, water is a precious resource we must protect!”

Comment: It used to be impossible for a candidate in the arid West to botch a prepared statement mentioning water. You defied the odds.

• Serna says: “The people of the 3rd Congressional District of New Mexico want to elect someone who knows our issues, understands our values, and fights hate crimes and antisemitism.”

Comment: Crime and punishment are dangerous topics for you, Mr. District Attorney. You have proven to be a disinterested and ineffective prosecutor for the people of Santa Fe, Rio Arriba and Los Alamos counties. For example, you and your crew failed to meet speedy trial deadlines while prosecuting a man in the murder of a 67-year-old librarian. The defendant walked free. And the values of almost everyone in your judicial district were trashed.

• Serna writes: “The problems we face with drug intervention is so massive the only way we can solve it is by developing a partnership with the federal government and local caregivers.”

Comment: The debt-ridden federal government in March allocated $2.77 million to combat opioid addiction in New Mexico. The state in August received another $6.1 million in federal grants for treatment and prevention of opioid addiction. This was followed last month by another federal grant of $4.75 million to the state Department of Health to abate overdoses.

• Serna is more committed than a tabloid editor to exclamation points. He writes:

“The Democratic Party would not be the party it is today without the strength, support and leadership of women!”

“The forum in Bernalillo County was fantastic!”

“It was wonderful to meet so many people at Taos’ beautiful Plaza!”

“One of the joys of campaigning is speaking to constituents and discussing the issues and hearing the personal perspectives!”

• Serna writes: “My tour of the 16 counties in the congressional district opened my eyes to many of the problems facing rural New Mexico and reinforced my passion for civil service.”

Comment: You’ve lived much of your life alongside some of the most crushing rural poverty in America. But only now, as a candidate who’s made a whistle-stop tour of Harding and Colfax and Mora, are you identifying the problems?

• Serna eulogizes a congressman: “Representative [Elijah] Cummings was an activist, leader and true American hero. We should all aspire to approach civil service with the honor and grace that he did.”

Comment: Fine. The District Attorney’s Office would have been as good a place as any to provide competent public service. Your successor won’t have a tough act to follow.

• Serna sizes up the congressional office he covets: “The district needs — and deserves a candidate with a plan, not just idea’s [sic] and visions.”

Comment: Campaigns can be a sort of shell game. You don’t rate a passing grade as a district attorney, but you hope to sidestep those failings while discussing big-picture issues, such as the potential impeachment of President Donald Trump.

Democrats have plenty of candidates to consider in the congressional campaign. Sitting high in the saddle for an ad might help you stand out for a moment.

It won’t be enough to sway voters who’ve watched you coast while hoping to climb to higher office.

Speaking of "Blocks" check out the father and son political tandem of the Blocks!

It's all in your archives along with that period of time of Eric Serna, Manny Aragon and many others! Shameful period!!

Richardson gave Manny Aragon the New Mexico Highlands University Presidency just to get him out of the way! He screwed that up as he always did with his ego!!

They haven't recovered yet, based on my recent dealings with the University, but that is another shameful story, for another time!

I have always found it difficult to swallow what Daddy and his strong political connections gave us the present Congressman who is running for Senator! It still is stuck in my craw!!

Go find those archives Milan, you should find much to write about!

This one, like most all the others, will continue the tradition of incompetent, unqualified people to be in Congress from this district. Another reason NM is last in most lists, look at the politicians that run and get elected.

Thank you as usual, Milan, for being the resident iconoclast at the New Mex. The latest flop in law enforcement in these parts is the large memorial at the corner of W. Alameda and Camino Alire. I'm no dyed in the wool progressive, but agree with Paul that at this point, there are far stronger candidates who need to be considered and who have deep roots in New Mexico. Further, who have a positive track record. Teresa is one of them and I hope this race turns on accomplishments rather than fund raising or empty and false platitudes.

He seems to hire friends and relatives at the DA's office with little or no experience. Look at the high turnover. He should focus on the job he has and maybe that would help the community more.

Got to agree with Milan on this one. Serna is even worse than his father. He is an incompetent DA, running "in spite of" his record, as he can't run "on" his record. He, and his side kick Padgett, need to be impeached, but voting them out will have to suffice. An example of Serna's incompetence; he won't prosecute an obvious case of murder and a cover up by the State Police, the killing of Jeanette Anaya. Serna was "interested" in the case UNTIL he was elected, then not interested. But, of course the New Mexican is also not interested in the case. http://nmindepth.com/2016/03/23/puff-of-smoke-justice-system-designed-to-clear-cop-who-killed-jeanette-anaya/

Milan, if I am not mistaken, the DA's office has missed a number of deadlines resulting in individuals freed without facing a trial. It might be good to do a follow-up on this focusing on that. But thanks for this. I've been thinking that Serna is one of the least worthy of a group filled with many unworthy and some worthy candidates. A piece on Valerie Plame would be welcome . Her tone-deaf campaign stands in shocking contrast to one of the truly authentic candidates, Teresa Leger.