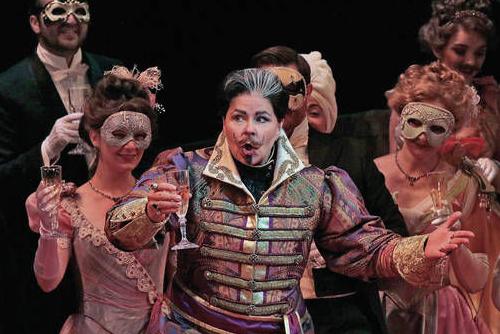 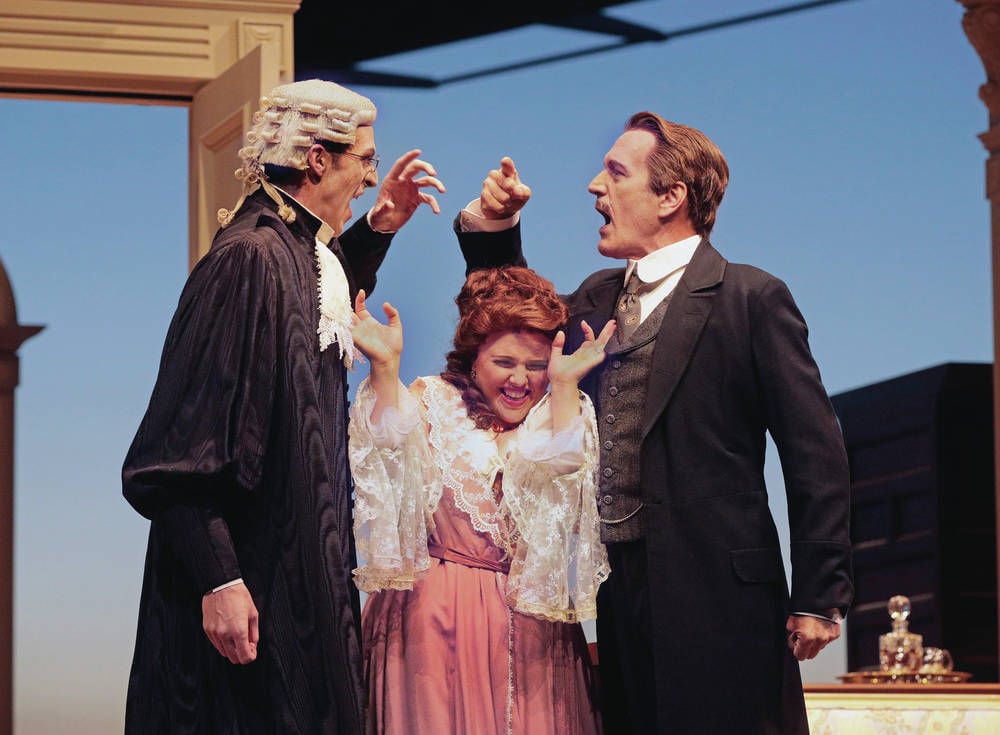 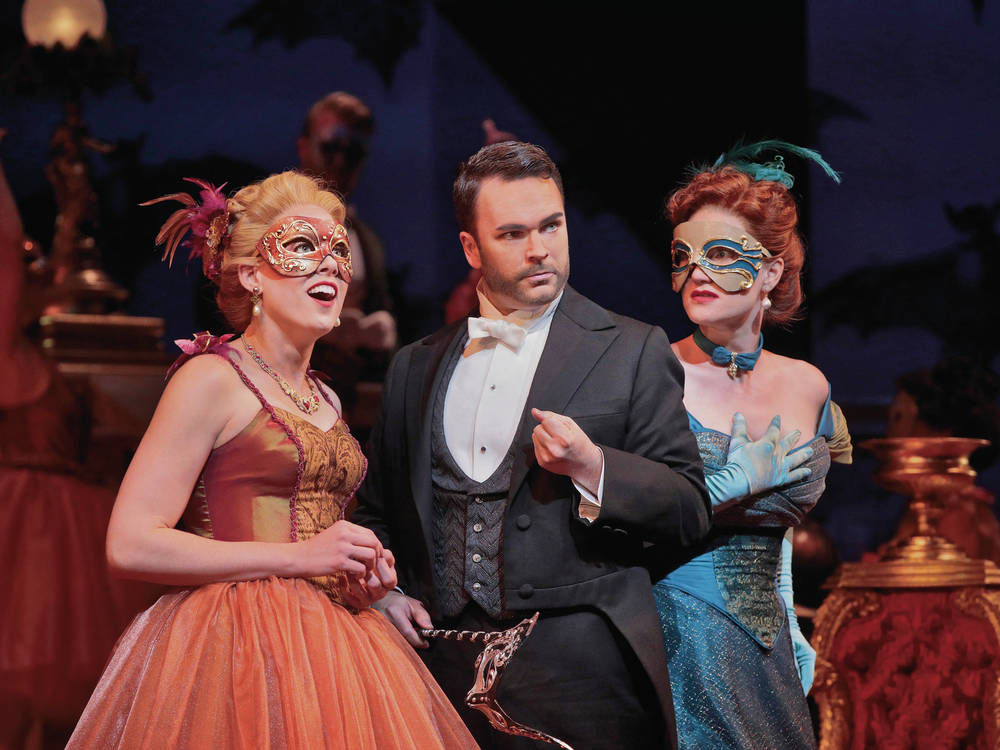 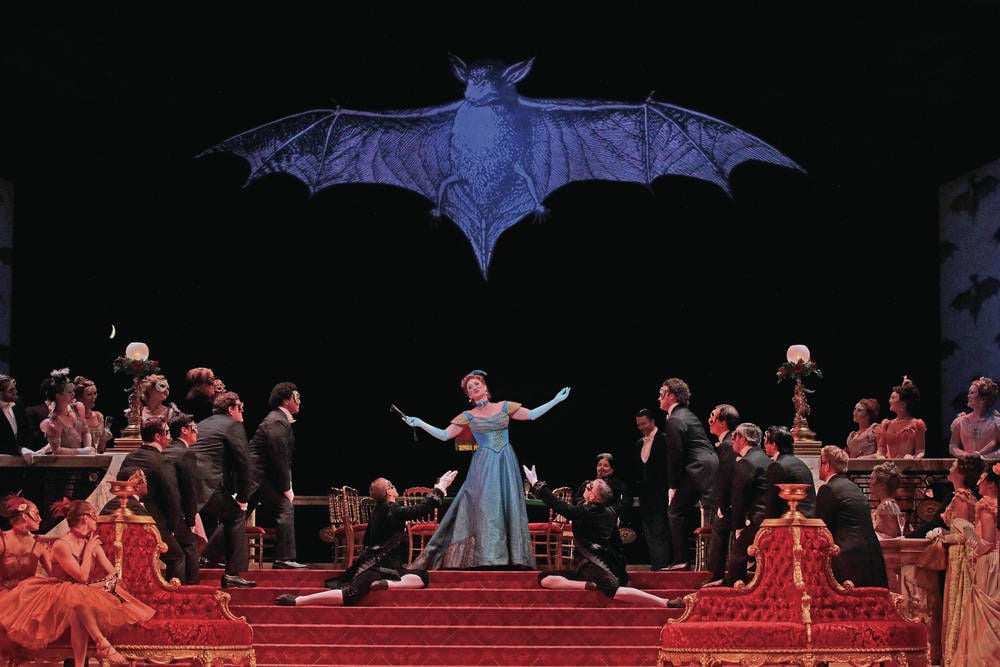 Die Fledermaus, which opened Santa Fe Opera’s 61st season on Friday night, figured in six of the company’s prior seasons but has been absent from its stage for the past 25 years. The operetta by “Waltz King” Johann Strauss II certainly has its partisans, though, and it was inevitable and appropriate that it should come up again in the rotation at some point. This new production, directed by Ned Canty, offers pretty much what one expects from the work: decorative sets and costumes, some lovely singing of entrancing tunes, some dry stretches, and abundant attempts to punch things up with an overlay of funny business. If you are a Fledermaus fan, you will probably love it. If you’re not, it is unlikely to convert you.

Allen Moyer’s handsome sets are fully-packed without being confusing. Act 1 takes place in the home of Gabriel and Rosalinde von Eisenstein (tenor Kurt Streit and soprano Devon Guthrie), here a late 19th-century boudoir and parlor between which we are supposed to imagine a wall, the furniture being upscale but in dull colors (reflecting, one supposes, the state of the Eisensteins’ marriage). Duane Schuler’s lighting clarifies which of these two implied rooms is in play at any moment. At the top of the set looms a huge bat, not realistic in the mode of the rooms but rather in the style of an engraving; and this image is repeated smaller as the pattern of the surrounding wallpaper.

Die Fledermaus, of course, means “The Bat,” a reference to an earlier prank Gabriel played on his friend Dr. Falke (baritone Joshua Hopkins) that left the latter, hung over, wandering the streets in full daylight still garbed in the bat outfit he wore to a costume party the night before. The operetta is the story of Falke’s revenge on Gabriel, an elaborate practical joke that seems way out of proportion to the original offense. The scheme centers on a ball given by Falke’s friend Prince Orlofsky (mezzo-soprano Susan Graham), an event that ensnares everyone in the Eisensteins’ orbit, most prominently their chambermaid Adele (soprano Jane Archibald) and Rosalinde’s suitor Alfred (tenor Dimitri Pittas), and exposes Gabriel as a womanizer — which, in the end, nobody cares about one way or the other. The symbolic overhead bat remains in place throughout the production — above the red-plush ballroom of Act 2 and the amusingly chaotic prison of Act 3.

The work is given in Charles Ludlam’s adaptation of an English-language version by Ruth and Thomas Martin, a married couple who translated oodles of operas in the mid-20th century into language that was touted as singable. In fact, their texts were often stilted, and I imagine that the Martins’ “singing translations” contributed greatly to the widespread demise of opera-in-English that followed. Here, the singers wrestled with it gamely, but listeners will have to rely on the seatback texts to really decode the syllables some of the characters emit. Hopkins at least scored a great moment by delivering the excruciating couplet “Come along to the ball; it will boost your morale” — and then turning to the audience with a combination of quizzical amazement and helpless exasperation. That was a sincerely funny touch, and one wished for more wit on its level as the production unrolled.

The Overture fully deserves its status as a concert chestnut. Conductor Nicholas Carter led it with verve, abetted by the polished orchestra, but after that the musical substance is slender. That point was made palpable when, well into Act 2, Archibald sang her famous Laughing Song (“My Dear Marquis”). The audience’s vigorous applause was fully earned. She delivered the aria joyfully and with vocal élan, her clear soprano proving agile and precise right up through its high register. But apart from her rock-solid professionalism, listeners must also have been relieved to finally hear Strauss provide something to sink their teeth into.

Guthrie scored a success as Rosalinde. An apprentice here as recently as 2012 and an appealing Marzelline in our 2014 Fidelio, she has blossomed into a rich-toned lyric soprano. Her rendition of “Voice of My Homeland” was deeply affecting, although one regretted the distraction caused by unnecessary ballerinas swirling about. Prince Orlofsky is not much of a part. Even his (or her, or its) “Chacun à son goût” number is really a character song rather an aria of any singerly splendor. Graham aced the part vocally, which is rather like saying a championship golfer hit a hole-in-one when teeing off from the middle of the putting green itself. Canty had her assume an attitude of terminal ennui, and he tried to augment her part by inserting stuff for her to do, like trying on false mustaches or modeling various robes and kimonos over her silk pajamas. (Why costume designer Zack Brown made those garments so unattractive, I can’t say. Most of the crowd’s outfits — colorful ballgowns for the ladies, white tie and tails for the gents — looked great.) One appreciates the effort made to pump up Orlofsky’s character while wishing it hadn’t been staged at the expense of other singers, such as when his personal fashion show upstaged an exchange of dialogue between Falke and prison warden Frank (bass-baritone David Govertsen).

Hopkins was impressive throughout as Falke, his beautifully modulated baritone making “Sing to Love” a highlight of the performance. Streit and Govertsen upheld their parts without great vocal luster, while Pittas proved harsh-toned and often out of tune. Stephen Carroll (tenor, as Dr. Blind, the lawyer) and Adelaide Boedecker (soprano, as Adele’s sister, Ida) attested to the promise that lies within the current crop of apprentice singers, and the apprentices en masse made a terrific chorus, prepared by Susanne Sheston. The Act 3 prison scene is usually seized as an opportunity for an actor gifted in physical comedy to do an extended routine as jailer Frosch. Here, Kevin Burdette’s turn was kept relatively brief — just five minutes of solo shtick — although more clowning came shortly thereafter when Govertsen got to waltz with a floor-mop. In the ball scene, four dancers did a vigorous mashup of ballet and acrobatics accompanied by Strauss’ polka-schnell Unter Donner und Blitz, replacing the composer’s original sequence of national dances.

In recent seasons, the company has been quite consistent about limiting its productions to a single intermission, but here they allow two. Probably the extra break was needed to facilitate a set change, but one wonders if that might have been accomplished with just a short entr’acte, perhaps accompanied by a Strauss waltz from the orchestra. As it is, the evening ran nearly three and a quarter hours, and audience response grew tepid during Act 3.

A director might choose to dig into deeper dramatic conundrums posed by Die Fledermaus. Is Rosalinde actually having an affair with her former flame Alfred, or, otherwise put, are her protestations against his advances meant to spurn him or to lure him in? What is the relationship between Falke and Eisenstein, or between Falke and Orlofsky? Which sex is Prince Orlofsky, anyway? Grappling with questions like these might make the piece come across as wiser, but Canty just goes for the laughs.