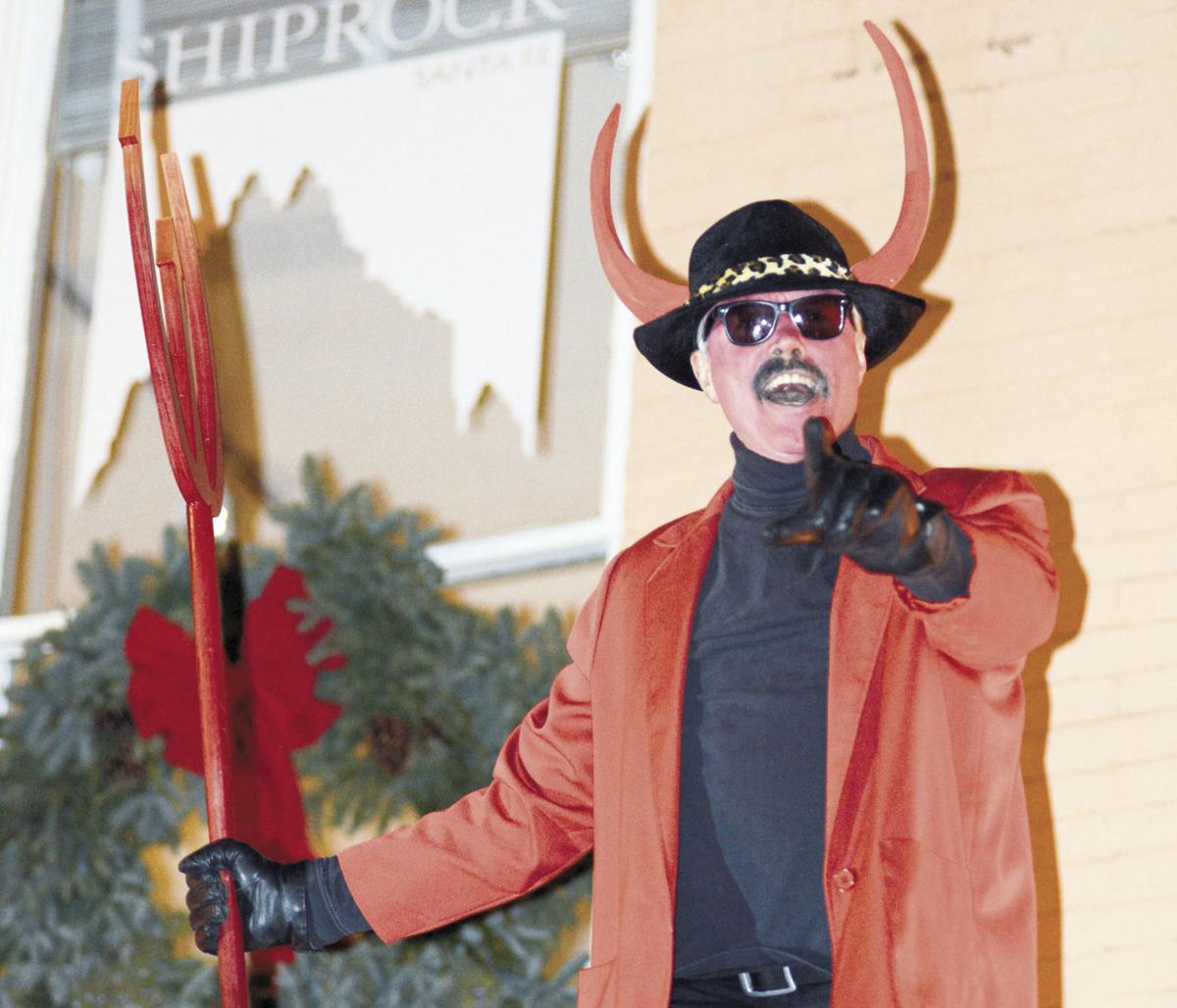 Roger Atkins, portraying a devil, tells Mary and Joseph there is no room at the inn during Las Posadas on the Plaza in 2013. New Mexican file photo 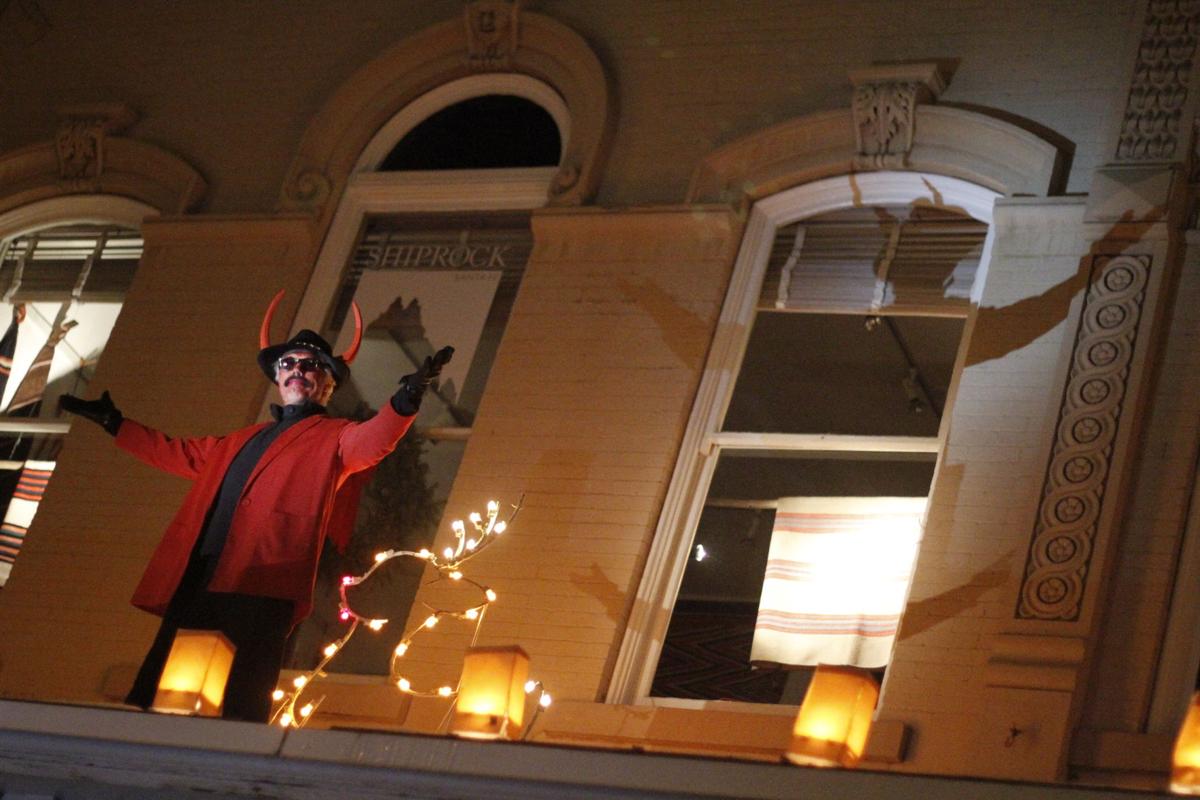 Roger Atkins portrays a devil in the Las Posadas procession on the Plaza in 2011, taunting Mary and Joseph from the Catron Block Building. Luis Sanchez Saturno/New Mexican file photo 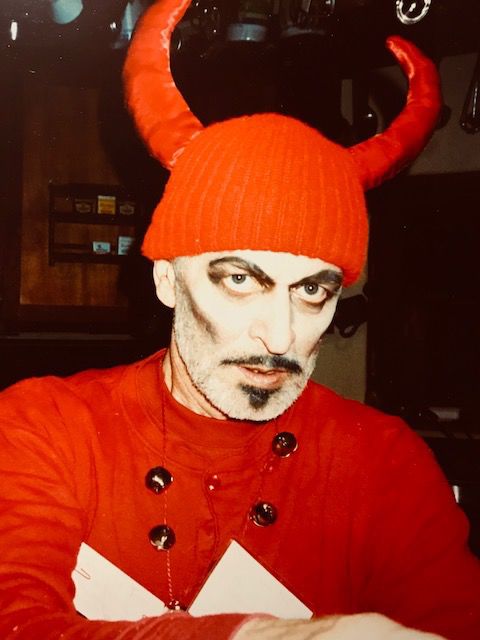 Darrell Dawson enjoyed playing the role of the devil in local Las Posadas celebrations. ‘That was a huge piece of his life,” said his daughter, Jennifer Dawson. ‘That led him into many musings and anecdotes about why the devil is necessary when we talk about spirituality and religious faith.’ Courtesy photo

Roger Atkins, portraying a devil, tells Mary and Joseph there is no room at the inn during Las Posadas on the Plaza in 2013. New Mexican file photo

Roger Atkins portrays a devil in the Las Posadas procession on the Plaza in 2011, taunting Mary and Joseph from the Catron Block Building. Luis Sanchez Saturno/New Mexican file photo

Darrell Dawson enjoyed playing the role of the devil in local Las Posadas celebrations. ‘That was a huge piece of his life,” said his daughter, Jennifer Dawson. ‘That led him into many musings and anecdotes about why the devil is necessary when we talk about spirituality and religious faith.’ Courtesy photo

Plaza-goers will have a devil of a time trying to see Lucifer in Las Posadas on Sunday evening.

He won’t be there.

This would be the second time in recent years that the roles of the four devils who have appeared for decades in the annual Christmastime procession would be exorcised.

For more than 30 years, the New Mexico History Museum, in partnership with a group of congregants from a Catholic church in the village of Santa Cruz, has presented the open-air pageant on the Plaza, which portrays Mary and Joseph’s journey to find a safe place for Mary to give birth to the baby Jesus. The four devils traditionally appeared on downtown rooftops to taunt the pair — until the roles were ousted in 2017 by the museum’s former director. The state Department of Cultural Affairs, which oversees the museum, brought them back the following year.

This time, said the museum’s interim director, Billy Garrett, the museum was not behind the decision to banish the devils.

“The decision about whether there would be devils or not was left up to the group that was going to be doing the ceremony,” Garrett said, referring to the informal group from La Iglesia de Santa Cruz de la Cañada that has organized the procession each year since the museum began presenting the event.

Sylvia Garcia, the leader of the Santa Cruz church group, could not be reached for comment about the banished devils.

Garrett said the museum reached out to the group months ago to confirm it planned to continue organizing Las Posadas.

“They stressed with us that this is an offering to the Santa Fe community and visitors,” he said, “and their wanting to celebrate family, tradition and love, and set up the season.”

In 2017, Andrew Wulf, the director of the New Mexico History Museum, chose to cast away the devils himself — but had support from the Santa Cruz group. A longtime nun at the church, Sister Angelina “Angie” Gonzales, told The New Mexican at the time that she found Santa Fe’s interpretation of the traditional Hispanic Christmas dramatization unusual and that she had raised objections.

“They’re not supposed to be in there,” she said of the devils. “They’re supposed to have innkeepers, not devils or anybody else. The story calls for innkeepers.”

Wulf agreed, saying, “We’re just reverting back to the traditional practice of Las Posadas, which has innkeepers in those roles. … Why would a devil be saying, ‘There’s no room at the inn’?”

But the museum had a change of heart, bringing back the devils for the 2018 pageant. State officials from the Department of Cultural Affairs called the local portrayal “unique” and said they felt they should “honor this established local folk art performance.”

Some experts on New Mexico historical traditions dispute that Santa Fe’s version of Las Posadas veers from the norm.

An article in the Winter 2019 edition of El Palacio magazine by Nicolasa Chávez, the curator of Latino/Hispano/Spanish Colonial collections at the Museum of International Folk Art, discusses the appearance of the devil in many New Mexico Christmas traditions.

Chávez, who played the role of the devil in the 2018 Las Posadas performance in Santa Fe, wrote, “the Devil regularly appeared in early productions of Las Posadas across Northern New Mexico.” She cited examples from Arroyo Seco and five other plays in which Lucifer makes an appearance.

Wulf, who was fired in February, faced criticism from local residents over some of the decisions he made in his four-year tenure, such as trying to end a long practice of hanging of Spanish coats of arms on the portal of the Palace of the Governors during Fiesta de Santa Fe celebrations, ousting the devils from Las Posadas and hosting a “Fiesta Symposium” with a panel that did not include any local Hispanic people.

He was making $91,441 a year, according to the state’s online Sunshine Portal.

Garrett is serving as interim director of the New Mexico History Museum until the museum’s board of regents hire a more permanent replacement.

Another change for this year’s Las Posadas: After the pageant, carolers will provide entertainment and hot cider and cookies will be served under the portal of the Palace of the Governors at the New Mexico History Museum, not in the museum’s courtyard. According to a news release, the change is due to an “abundance of caution” related to a courtyard tree damaged by recent winds.

What: Las Posadas, a traditional pageant in which Mary and Joseph search for shelter before Jesus' birth; the event is presented by the New Mexico History Museum.

Where: The Santa Fe Plaza

When: The candlelit procession will begin at 5:30 p.m. on the Plaza and end in the courtyard of the Palace of the Governors. After the pageant, carolers will provide entertainment, and cookies and hot cider will be served under the portal. Event is free.

When I was a little kid in Buffalo, NY and my Sicilian grandmother was raising me, there was a tradition, but I think just before Easter, when the parish priest would come around with holy water to sprinkle in the house and people would "sweep the devil out" of the house. Not sure that was an Italian custom or a Catholic custom or something else but recall it vividly.

Interesting article, but the writer refers to Nicolasa Chavez (Nicolasa Chávez, the curator of Latino/Hispano/Spanish Colonial collections at the Museum of International Folk Art) as "he." Either the writer does not understand Hispanic names, or she is going too fast to realize that Dr. Chavez is a woman.

As fans of 1950s Mexican cinema know, the devil is central to Christmas https://youtu.be/bM6QHM6Hlvw

At this time in the history of our country, while we see the rise in white nationalism, supported by a xenophobic president, tearing babies from the arms of immigrant mother’s arms. Mary and Joseph are representative of this plight. The devils are symbols of the darkness in the hearts of those who would turn them away, as they sought refuge. To take the devils out would be a tragedy, especially during this time in our country/state’s history! PLEASE DON’T TAKE OUT THE DEVILS !!! Our spirits need this now.