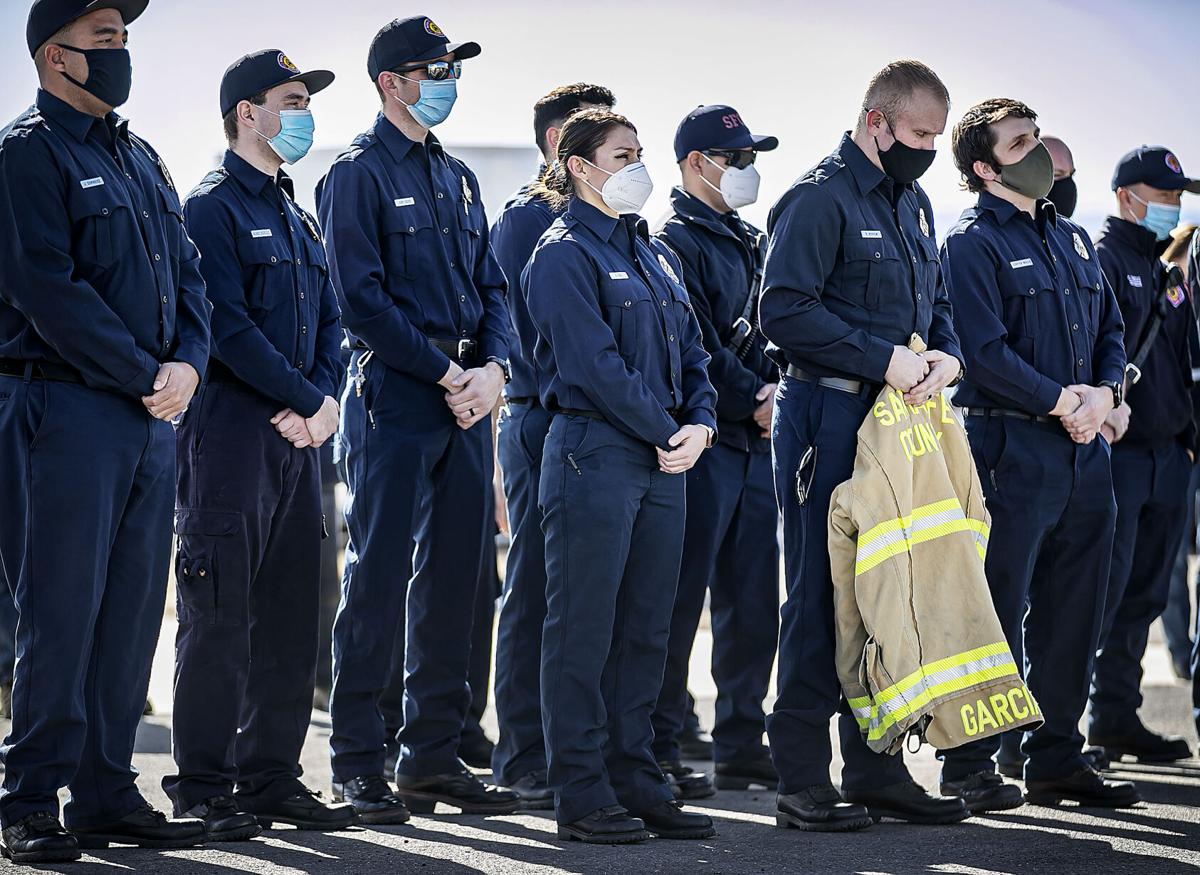 Santa Fe County firefighters honor former firefighter Isaac Garcia on the 10-year anniversary of his death Wednesday with the unveiling of a plaque at the Isaac Garcia Training Tower. 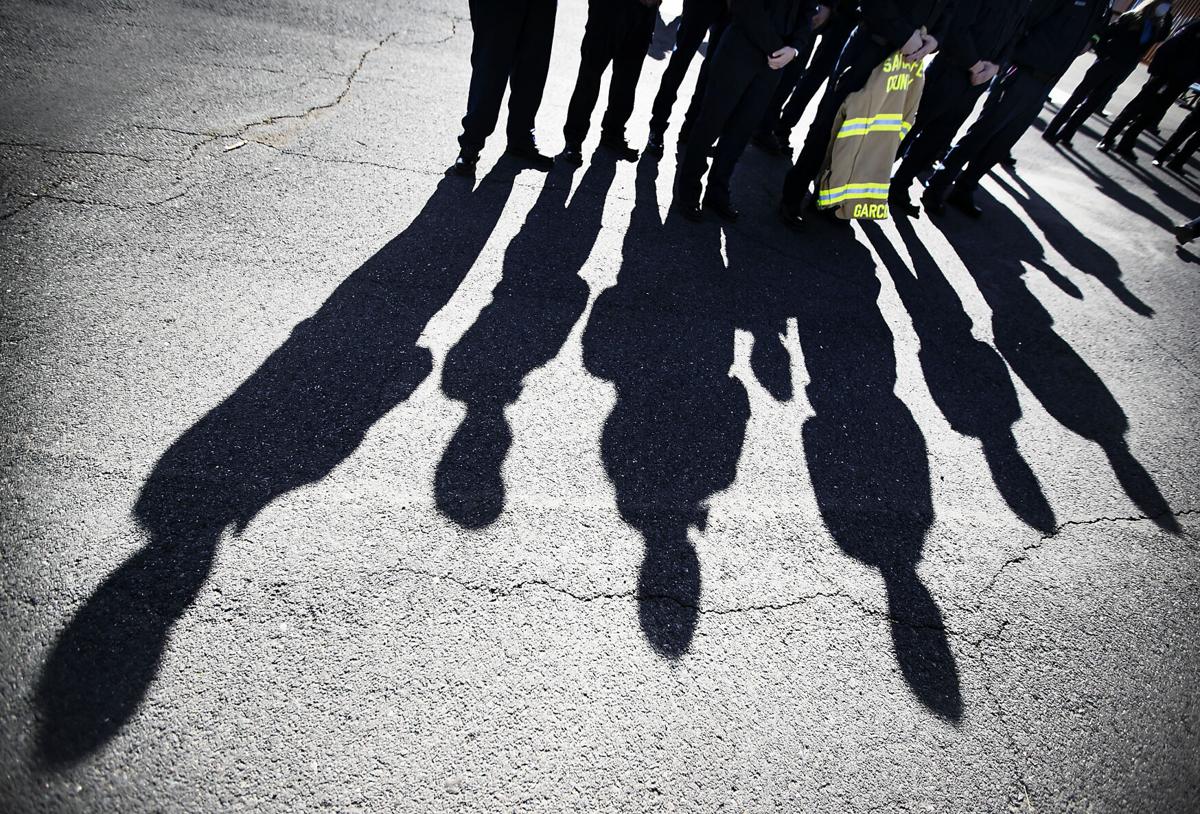 Santa Fe County firefighters cast shadows as they gather Wednesday to honor former firefighter Isaac Garcia, who died 10 years ago of a heart ailment, with a plaque at the Isaac Garcia Training Tower. The event was held at 1:12 p.m. Jan. 12 in honor of his badge number, 112. 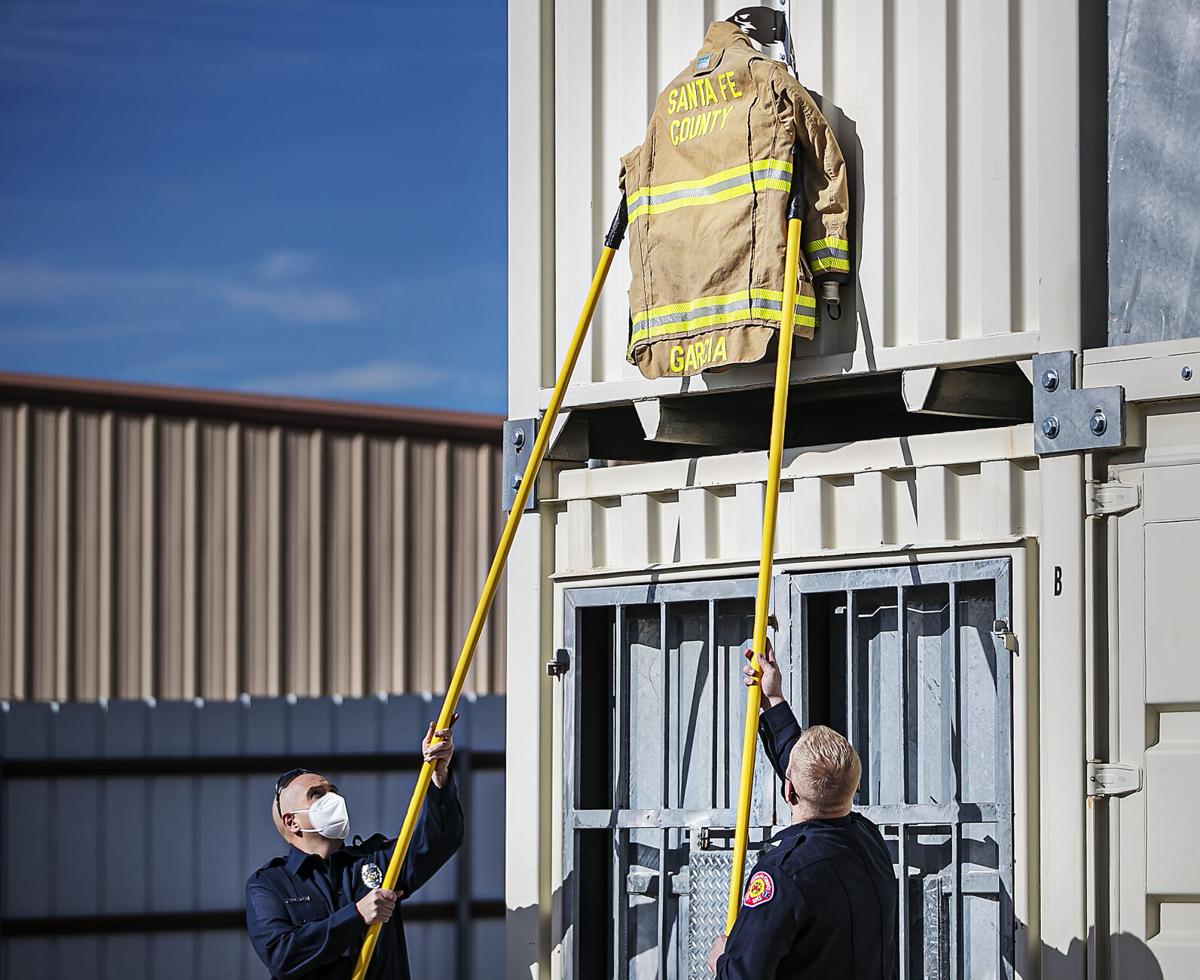 Clarence Romero, left, and Bradley Morrow unveil a plaque Wednesday they made to honor firefighter Isaac Garcia, who died 10 years ago of a heart ailment, at the Isaac Garcia Training Tower. 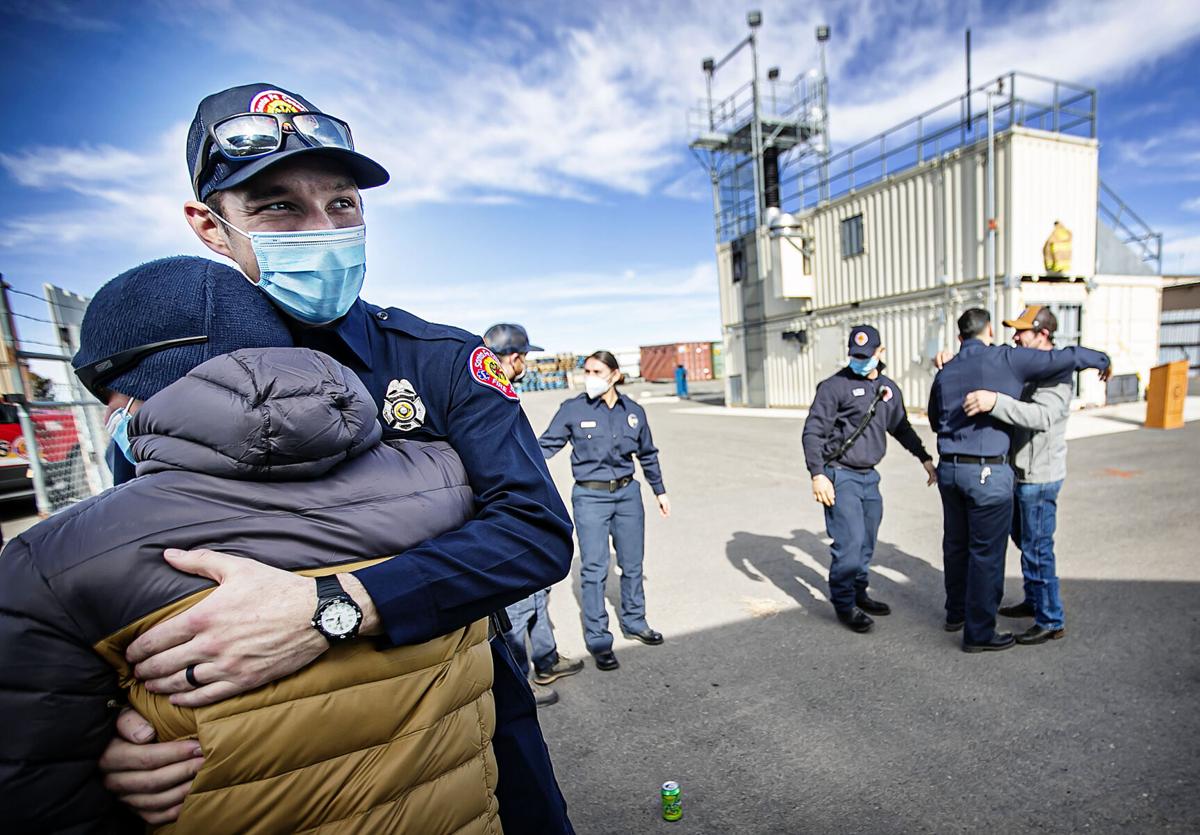 Santa Fe County firefighters honor former firefighter Isaac Garcia on the 10-year anniversary of his death Wednesday with the unveiling of a plaque at the Isaac Garcia Training Tower.

Isaac Garcia “embodied progress” and always drove himself to support those around him, said Garrett Allen, a close friend who graduated from a fire academy with Garcia in 2007 and worked with him at the Santa Fe County Fire Department.

“If he was anything, he was uplifting,” Allen said. “He always wanted to help people.”

Garcia died 10 years ago at age 25 from a heart condition called an aortic dissection.

The fallen firefighter, who began his career as a teen volunteer with the Glorieta Pass Volunteer Fire Department, has not been forgotten. County officials and firefighters, retirees and other community members aim to keep his memory alive for decades to come. On Wednesday, they commemorated Garcia’s life, work ethic and valor by naming the county fire department’s Agua Fría training tower after him.

A plaque funded and handmade by department engineer Brad Marrow was unveiled at 1:12 p.m. Jan. 12 reading “Isaac Garcia Training Tower 112,” in honor of his badge number.

“The fire department is full of many traditions, and honor is one of our tenets,” Chief Jackie Lindsey said at the ceremony. “I think today speaks to the fact that where we are is because of people like Isaac.”

Garcia was born in Kolkata, India, where he was orphaned. He was adopted at the age of 3 months by the Garcia family, who raised him in Santa Fe. The family did not attend Wednesday’s ceremony.

Assistant Chief Jacob Black, another friend of Garcia’s, spoke of the immense effect the friendship had on his life. Garcia’s most memorable traits, Black said, were his infectious smile, mature demeanor and a willingness to self-sacrifice.

“His presence brightened everyone,” Black said. “He was truly phenomenal.”

Black, who adopted children of his own, recalled conversations with Garcia about adoption and the way it affected his life.

“We worked through a lot of those things and just had a very special relationship,” Black said. “I think that has helped me prepare for being a dad and my relationship with my kids.”

The choice to have the plaque hang above the training tower was to honor Garcia’s commitment to physical health and fitness, and his determination, which so many people admired, Black said.

Hamilton said at Wednesday’s ceremony she knew of Garcia during her initial days as a volunteer firefighter. She called him a “great role model.”

“I think this kind of thing brings us together in the right spirit and will help us to stay strong during times when we may feel weak or inadequate,” she said.

“It is a testament to the contribution that immigrants make to this country,” she said. “Isaac became part of us and we are part of him.”

What a great story about Santa Fe County Firefighter Isaac Garcias' contribution to the community. I was driving by 599 on my way to Tierra Amarilla and saw all of the fire-fighter's vehicles in the parking lot. So, I decided to stop by to see on what was happening at the Agua Fria's Fire Station. What was interesting after the unveiling of the plaque for the fallen firefighter and the ceremony had ended, a chaplain (I believe a law enforcement chaplain) was conducting a prayer over it. Amazingly, the fire-fighter's attending the ceremony recognized and immediately join him with a prayer over the plaque and fire-fighter's community. It appeared this chaplain was not part of the ceremony, but he was present to show his respects to the fallen fire-fighter and his family. Just curious, does anyone know who this chaplain is and where is he from? I was very impressed with his humble and gentle words that he shared with everyone yesterday. Frankly, you don't see this type of positive faith-based interactions happening in the first-responder community. Have a good day!