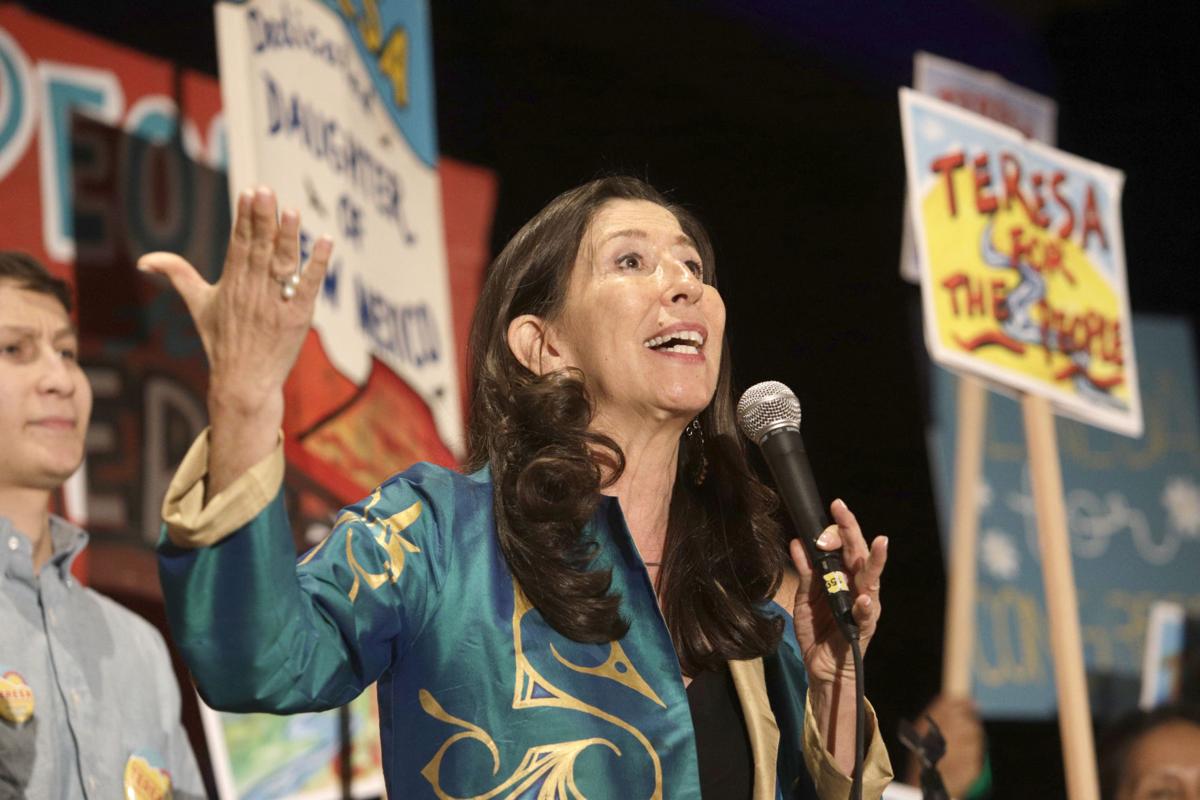 Teresa Leger Fernandez speaks at the New Mexico Democratic pre-primary convention Saturday at Buffalo Thunder Resort & Casino. ‘There’s a wonderful moment of joy that me and my supporters are in right now because we worked really hard, we got very excited, we believed in this campaign,’ Leger Fernandez said after she won the most votes from convention delegates. 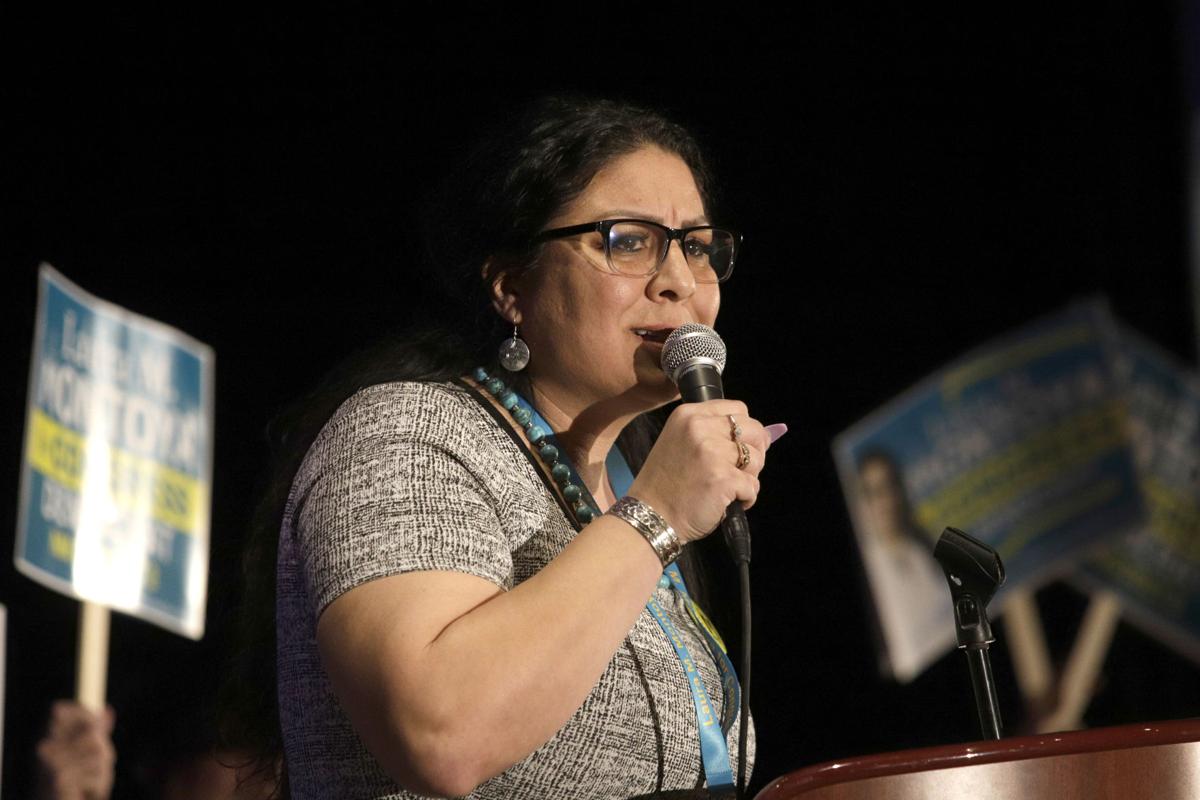 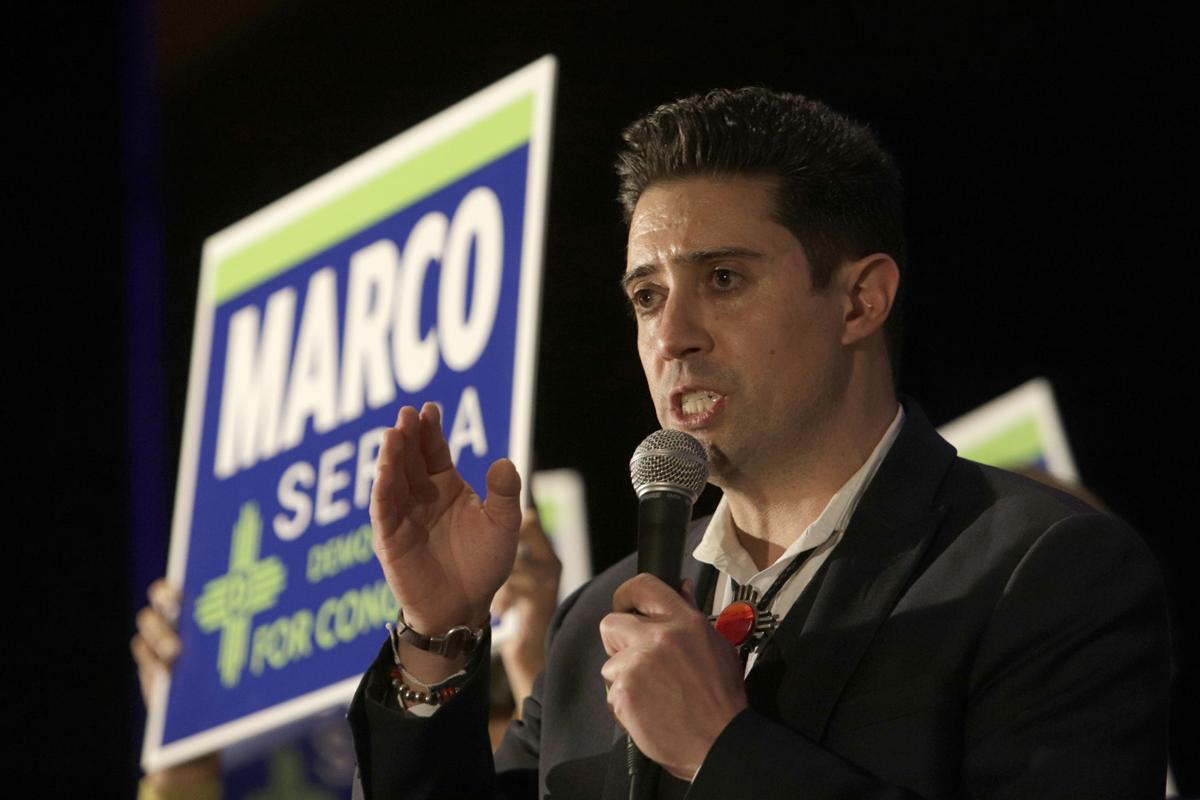 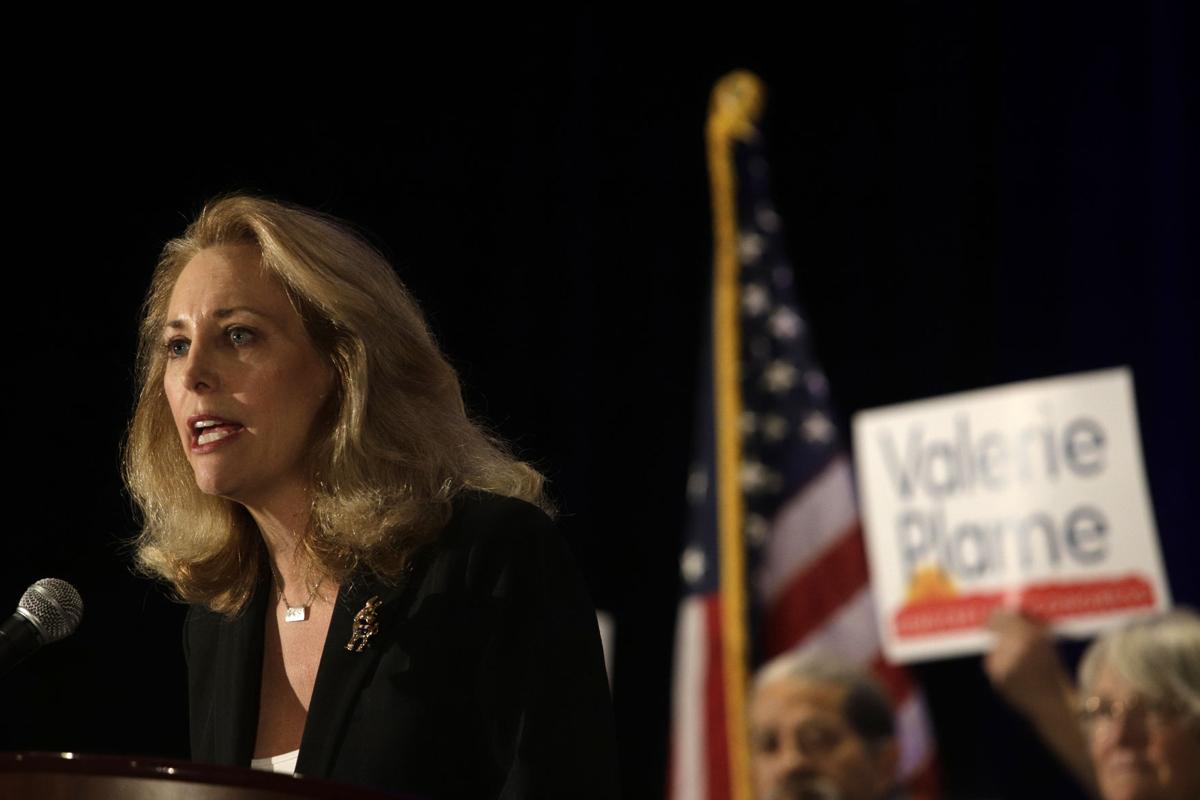 Valerie Plame speaks March 7 at the New Mexico Democratic pre-primary convention at Buffalo Thunder Resort & Casino. Despite her commanding lead in fundraising for the race for the 3rd Congressional District, she failed to automatically qualify for the ballot after a convention vote. 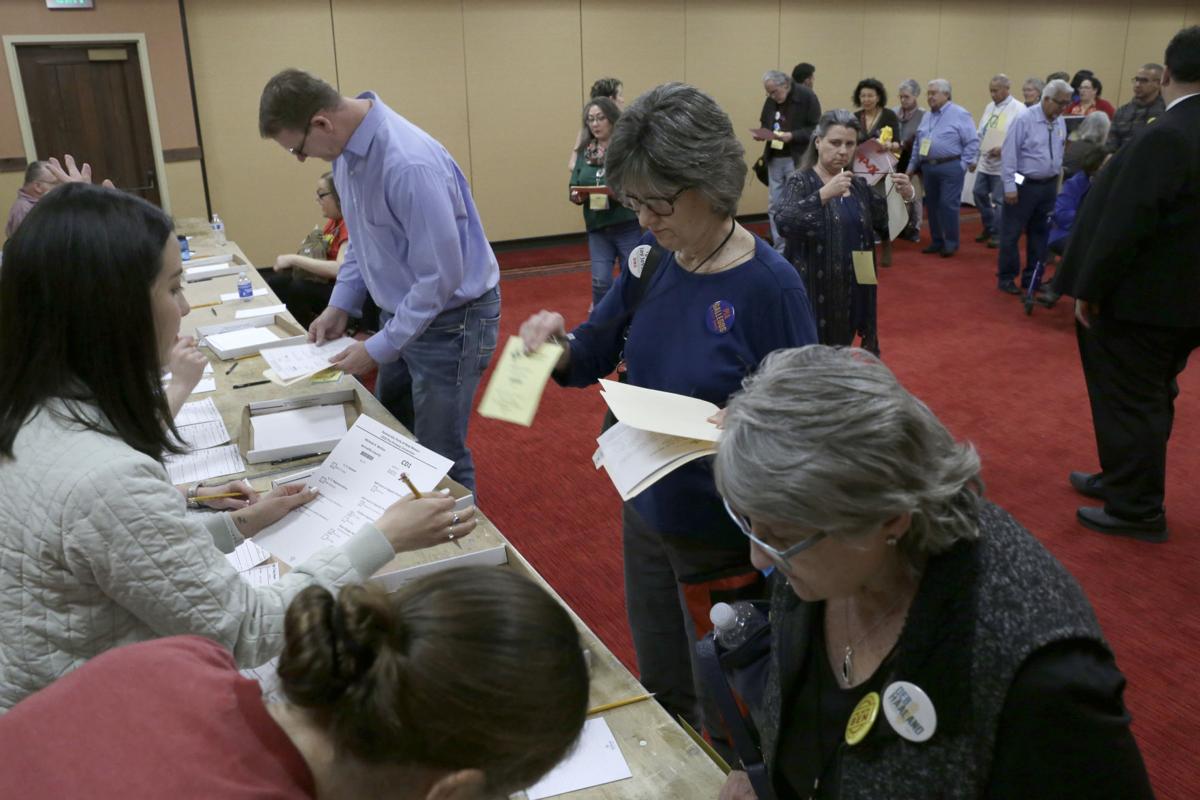 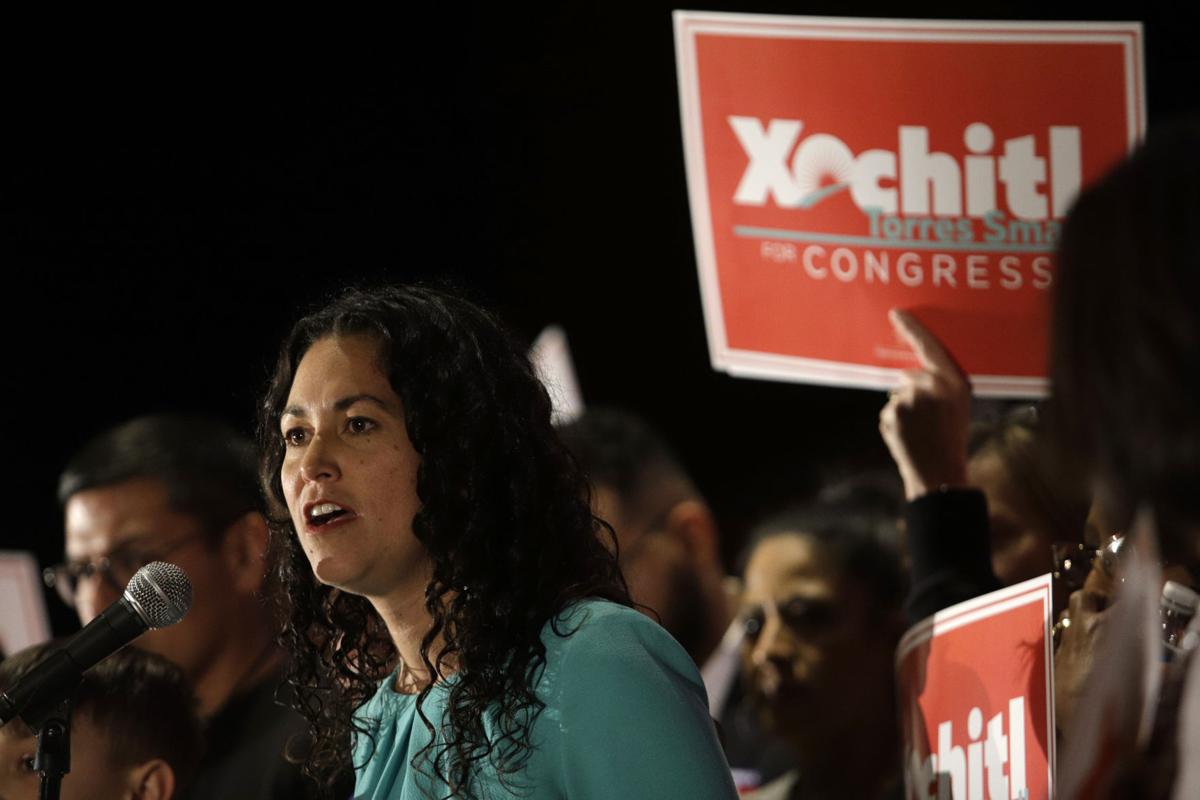 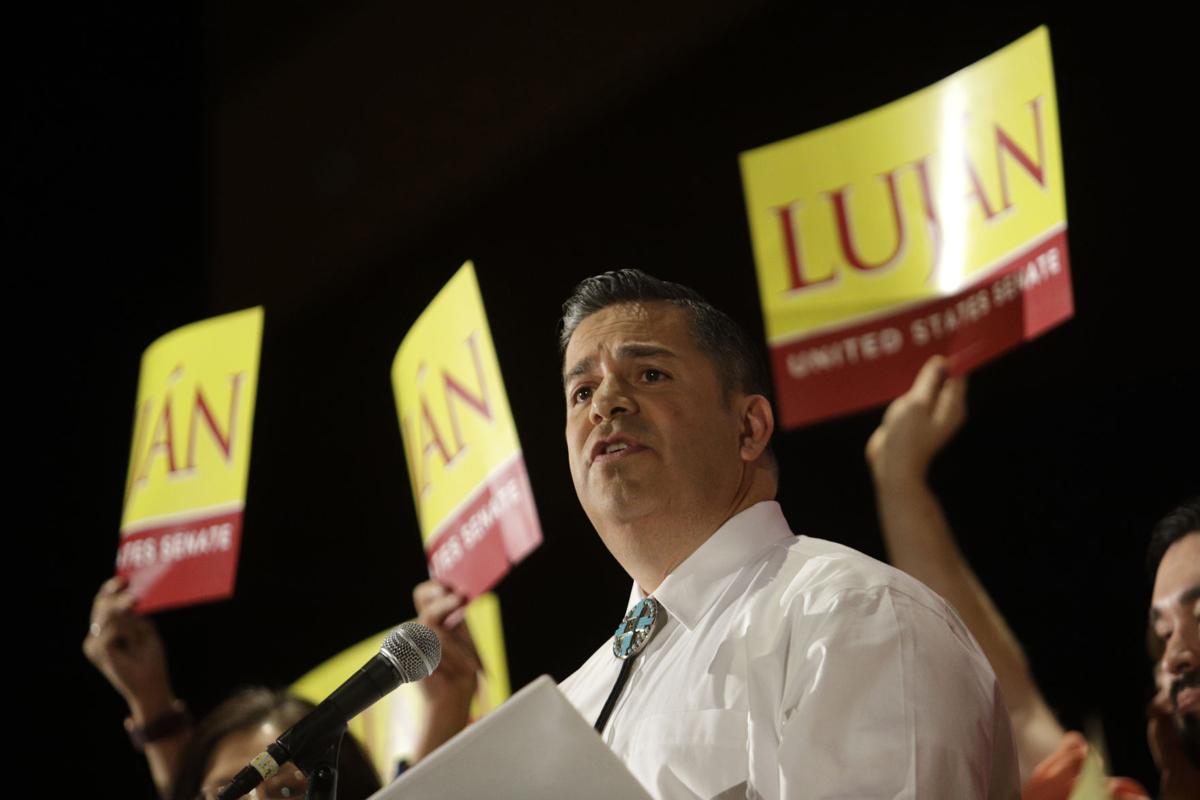 Teresa Leger Fernandez speaks at the New Mexico Democratic pre-primary convention Saturday at Buffalo Thunder Resort & Casino. ‘There’s a wonderful moment of joy that me and my supporters are in right now because we worked really hard, we got very excited, we believed in this campaign,’ Leger Fernandez said after she won the most votes from convention delegates.

Valerie Plame speaks March 7 at the New Mexico Democratic pre-primary convention at Buffalo Thunder Resort & Casino. Despite her commanding lead in fundraising for the race for the 3rd Congressional District, she failed to automatically qualify for the ballot after a convention vote.

Leger Fernandez won 41.9 percent of the delegate vote, according to a preliminary count, while Sandoval County Treasurer Laura Montoya was second with 20.4 percent. That qualified both candidates to be guaranteed a place on the ballot in June’s Democratic primary, held ahead of November’s election to determine a replacement for U.S. Rep. Ben Ray Luján, who is seeking a U.S. Senate seat.

“There’s a wonderful moment of joy that me and my supporters are in right now because we worked really hard, we got very excited, we believed in this campaign,” Leger Fernandez told The New Mexican after the results were announced.

None of the other five candidates at the convention received 20 percent of the delegate vote, which is a requirement to be guaranteed a place on the ballot. They can still get on, however, through an alternative process that involves gathering signatures.

Montoya took second place Saturday even as she raised the lowest amount of money last year among Democratic candidates.

“We did it,” Montoya told the audience at Buffalo Thunder after the results came in. “This is a perfect example that every vote counts. I am so thankful to you for believing in me. We’re going to win.”

Even though only two candidates reached the 20 percent threshold, the field will likely remain packed. Most of the other candidates said they already had the required number of signatures and felt confident their grassroots work could propel them to victory in June.

Plame’s campaign, for instance, said it had already collected more than 6,000 signatures and that she would be on the ballot.

“Valerie has grassroots supporters in all 16 counties who believe in her message of affordable health care for all, tackling the climate crisis and reforming our unjust immigration system,” said Plame’s campaign manager Alex Koren.

Plame has been considered one of the favorites in the race because of her name recognition — her identity as a CIA operative was famously leaked and published in 2003 — and because she has raised the most money by far in the race, pulling in $1.1 million through the end of 2019.

Serna also said he believed he could win the nomination, pointing out that delegates don’t represent all the voters in the district.

Sanchez made similar comments, noting he had already gathered 4,500 signatures.

“I think that’s a reflection of the grassroots effort I have behind me,” Sanchez said.

Blair also said he expected to have enough signatures to appear on the ballot, and added he was pushing for a public forum at which the candidates could debate ahead of the primary.

Still, Saturday was Leger Fernandez’s day, as she received more than twice as many votes as Montoya and more than three times as many as Serna. She said the big win would propel her campaign ahead of the primary.

“That energy of having won it so decisively is what I’m going to take into the pre-primary race to June,” she said.

She added that she attributed the wide margin of victory to her work gathering support in communities across Northern New Mexico in recent months.

“If I can share with people what I’ve been working on all my life and the passion I have for my communities, they get excited and they support me,” she said.

Tony Gerlicz, a delegate who voted for Leger Fernandez, said after voting that he was attracted by her positions on the environment, labor, education and minority rights.

“She’s got the whole package,” said Gerlicz, who is founder of Monte del Sol Charter School in Santa Fe. “I’ve rarely been as excited for a candidate as I have for her.”

In their speeches at the convention, many candidates sought to distinguish themselves, pointing out aspects of their background that were different from other candidates.

For Leger Fernandez, it was her appointment by former President Barack Obama as vice chairwoman of the Advisory Council on Historic Preservation.

For Blair, it was his prior work for prominent state officials and in the Obama administration.

Plame said her “battle against” the Bush administration made her “uniquely qualified to fight” for New Mexicans.

Sanchez noted he was the only sitting state legislator among the candidates.

Tisdel said he was the only one who has fought in court against the government and energy industry on environmental issues.

And for Montoya, it was her humble upbringing in a poor county.

“I split and cut wood, I learned how to shoot and I hitched a trailer to a truck before my foot could reach the pedal,” Montoya said. “I’ve had to work 10 times harder to have a seat at the table.”

In other votes, Luján received 100 percent of the delegate vote in the race to replace U.S. Sen. Tom Udall, who is retiring. New Mexico Secretary of State Maggie Toulouse Oliver dropped out last year.

U.S. Reps. Deb Haaland and Xochitl Torres Small also got all of the vote Saturday as they run for reelection in the 1st and 2nd districts.

“We aren’t going to take a threat from that guy in the White House who says he can win New Mexico,” the governor said in a speech at the state Democratic pre-primary convention.

This is the most disgusting and corrupt example of how our democracy is broken. Elite, rich party bosses and activists pick the candidates, the people's voices are silenced in this outrageous process.

So glad the delegate count that Teresa amassed today reflects the quality person and quality candidate that she is. She will make an outstanding Congresswoman. Exciting to think that New Mexico can have three Congresswomen of color representing us.