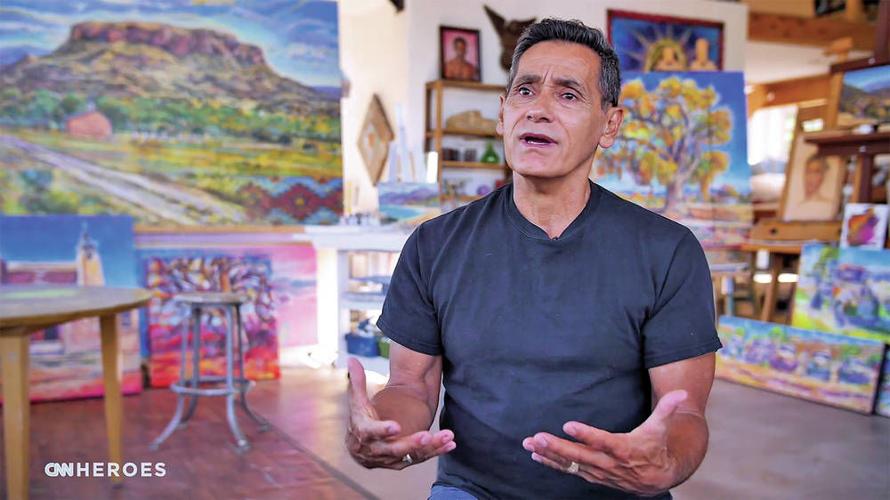 Española’s Roger Montoya speaks in a 30-second video for the CNN Heroes series. The 59-year-old Velarde resident is running for the vacant House District 40 seat in the Nov. 3 general election. 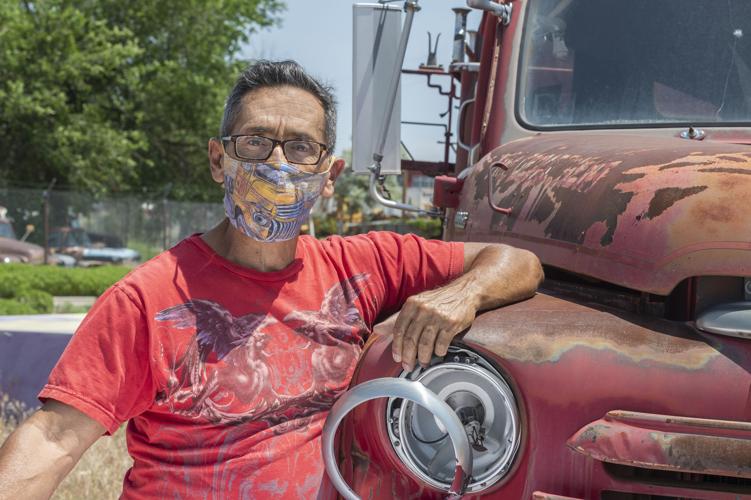 State House candidate Roger Montoya confirmed he appeared in pornographic films when he was a struggling college student nearly four decades ago. Since then, he also has worked on youth anti-violence programs and was recognized as one of the The New Mexican‘s 10 Who Made a Difference in 2000 for his volunteer work with several nonprofits and for organizing an HIV support group in Española.

Española’s Roger Montoya speaks in a 30-second video for the CNN Heroes series. The 59-year-old Velarde resident is running for the vacant House District 40 seat in the Nov. 3 general election.

State House candidate Roger Montoya confirmed he appeared in pornographic films when he was a struggling college student nearly four decades ago. Since then, he also has worked on youth anti-violence programs and was recognized as one of the The New Mexican‘s 10 Who Made a Difference in 2000 for his volunteer work with several nonprofits and for organizing an HIV support group in Española.

Roger Montoya, a Northern New Mexico Democrat who is running for the state House of Representatives, confirmed Monday he appeared in pornographic films when he was a struggling college student nearly four decades ago.

“I am not proud of that choice, as I was young, and naïve,” Montoya said in a statement posted on his campaign’s Facebook page. “But those experiences helped me to understand the exploitation young people face.”

Montoya’s past work in pornography was first reported last week by the Piñon Post, a conservative online news organization that said Montoya appeared to engage in “unprotected sex in multiple gay films” under the names “Joe Savage” or “Eric Martinez.” The news organization said it had not been able to confirm the allegations.

Montoya had remained silent on the report, which had circulated on social media, until Monday.

In his statement, he said, “Those experiences do not reflect who I am, and they are insignificant in the scope of my life’s work, yet they helped inspire my dedication to my community and the work I do to make sure that youth have opportunities, support and confidence.”

Montoya, an artist, dancer and longtime community organizer who was recognized as one of 10 CNN Heroes in 2019, leads Moving Arts Española, a local youth center that offers classes in arts, music, dance and gymnastics. He also has worked with youth on anti-violence initiatives.

In 2000, he was named one of The New Mexican‘s 10 Who Made a Difference for his volunteer work with several nonprofits and for organizing an HIV support group in Española.

Montoya also helped implement the first HIV education programs in Española schools. He has said he was working as a professional dancer in New York City in 1986 when he tested positive for HIV.The 59-year-old Velarde resident is running for the vacant House District 40 seat in the Nov. 3 general election against Republican Justin Salazar-Torrez, an Española city councilor.

Rep. Joseph Sanchez, D-Alcalde, chose not to run for reelection to District 40. Instead, he made an unsuccessful bid for the Democratic nomination in the 3rd Congressional District race.

Salazar-Torrez said he would continue to remain focused on his campaign rather than Montoya.

“Right now, that is their campaign’s issue that they’re dealing with,” he said of Montoya’s revelations. “We have not put much energy, thought or attention into what the Montoya campaign is going through. Our focus has been just on our race.”

Asked whether he thought the revelations would hurt Montoya’s election bid, Salazar-Torrez said voters would have to decide.

He also was sympathetic to Montoya.

“We’re here to offer any support [to the Montoya campaign] that we can, whatever that may be,” he said. “We live in a society that tends to bully, that tends to nitpick at everybody, and that’s not what we’re about.”

Montoya declined requests for an interview. But in his statement, he said he was 22 when he appeared in the films.

“I was a modern dancer and performer living in Los Angeles,” he wrote. “I worked hard to earn my own way, never relying on anyone else, including my parents. I was auditioning for commercials and doing my best to succeed. Among those choices were two adult films I acted in as an adult, with other adults, in a very different environment and time.”

Montoya said he knew when he was asked to run for a seat in the state House that “Republicans and their allies would bring up whatever they could to discredit me.”

“If the Republican Party chooses to focus on something I did nearly four decades ago rather than how hard I will work to bring back our devastated economy, provide healthcare, create new jobs and industries, to improve our public schools, to fix our crumbling infrastructure, and to protect our land, acequias and our way of life, that is their choice,” he wrote. “I trust the voters to make a better choice because we have so much at stake this November.”

Late Monday, the Republican Party of New Mexico called on Montoya to drop out of the race.

“This irresponsible and reckless behavior of starring in gay porno films, whether it takes place now or years ago, is unbecoming of any candidate or elected official,” party Chairman Steve Pearce said in a statement. “If you’re a public servant, you must be held to the highest standards.”John Block, founder and editor of the Piñon Post, said in an interview Montoya appeared to not take responsibility for his actions.“It seems like he is trying to blame the Republican Party at large for his decisions when, in reality, it’s the voters that deserve to know who their potential future representative is,” Block said.

On his campaign page on Facebook, Montoya’s supporters lauded him for what they called his integrity, candor and commitment to public service.

“Who people have sex with is none of our business,” Greg Sonnenfeld, an engineer and political organizer, wrote in a thread that generated dozens of comments. “Keep representing the community.”

University of New Mexico political science professor Lonna Atkeson said “sex scandals” are the least likely to affect the outcome of an election. She pointed to President Donald Trump and former President Bill Clinton as examples.

House Speaker Brian Egolf said Montoya wanted to be “open and honest” as he campaigned.

“People should, and I believe do, make their decision on whom to support in an election based on who they are and what they can offer to their community,” he said. “On that account, Roger Montoya is the clear and obvious choice to be elected to the state House.

“He has built his life as one of service to his community and has given himself for decades to make Española and the Española Valley and all of Northern New Mexico a better place,” Egolf continued. “His record of service to the community is exemplary. He will make a fantastic state representative.”

Egolf said a decades-old decision that Montoya says he regrets and wouldn’t repeat should have “no bearing on whether or not voters place their trust and confidence” in the candidate.

“I support him wholeheartedly and admire and respect him, his courage and his commitment to his community,” Egolf said.

In his statement, Montoya said he has brought people “from all walks of life” together to tackle some of the state’s most pressing issues over the past three decades.

“I’m proud of helping people in rural New Mexico deal with life-threatening illnesses during the AIDS and COVID pandemics,” he wrote.

“I am proud of bringing arts to the schools in a new and creative way that included an entire community,” Montoya said. “I am proud of the non-profits I’ve founded and the work they are doing today to inspire our community, to provide food and shelter to our homeless, to feed and nourish, and address chronic substance abuse.

“I am proud to have worked alongside so many in this community to bring change for the better, and nothing will change that.”

Column No. 200: It doesn't end with Old Pecos Trail