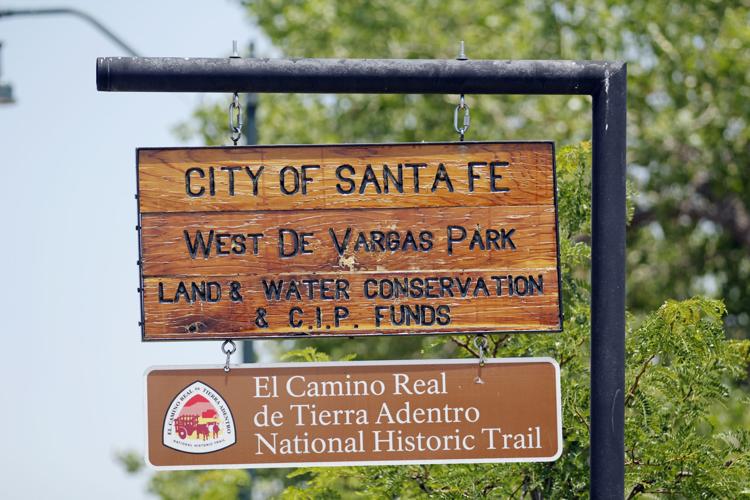 Luis Sánchez Saturno/The New MexicanDon Diego de Vargas, for whom a Santa Fe Park is named, is being reexamined. 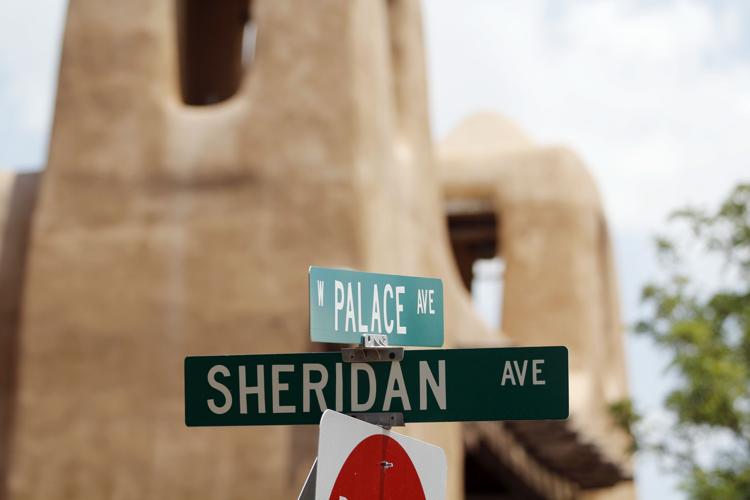 Philip Sheridan, notorious for his brutal tactics in conflicts against Native people, has a short city street bearing his name. 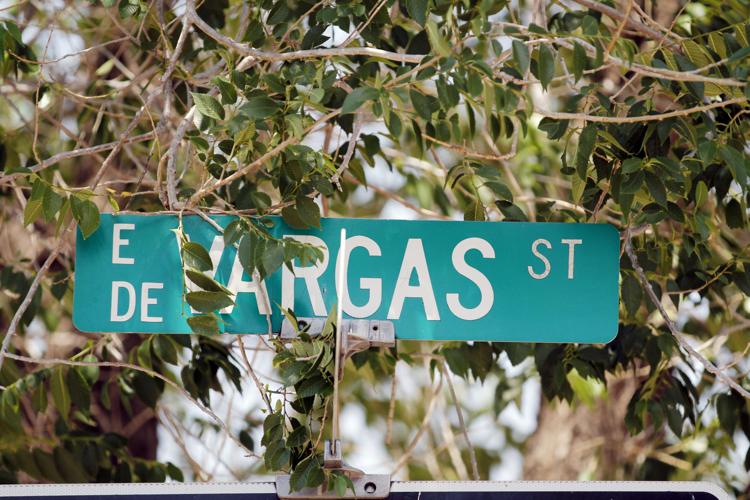 Santa Fe Mayor Alan Webber ordered a statue of Don Diego de Vargas removed from Cathedral Park. But de Vargas' name remains — not just on a privately owned mall but on a city street and park.

Luis Sánchez Saturno/The New MexicanDon Diego de Vargas, for whom a Santa Fe Park is named, is being reexamined.

Philip Sheridan, notorious for his brutal tactics in conflicts against Native people, has a short city street bearing his name.

Santa Fe Mayor Alan Webber ordered a statue of Don Diego de Vargas removed from Cathedral Park. But de Vargas' name remains — not just on a privately owned mall but on a city street and park.

El Paso city leaders have tossed Robert E. Lee from a street sign and replaced the name with “Buffalo Soldier.”

A growing call for an end to systemic racism is prompting cities across the U.S. to purge public monuments dedicated to controversial figures — and even everyday places, such as streets, schools and parks. A movement underway in New Mexico also has led to the removal of public monuments, largely those commemorating Spanish colonizer Juan de Oñate and conqueror Diego de Vargas.

In some cities, the movement is now focusing on facilities.

Both efforts have faced fierce pushback.

Many opponents to name changes argue the move won’t erase the painful parts of history those names represent.

Corrine Sanchez, executive director of Tewa Women United, said she sees a reason to replace names that celebrate colonizers: “There is a lot of power in language.”

Fifteen years ago, her tribe changed its name to Ohkay Owingeh from the colonial San Juan Pueblo and, in turn, reclaimed a piece of its history, she said.

Derek Alderman, a geography professor at the University of Tennessee, also spoke about the power of place names — which is what often makes them difficult to alter, he said.

“By putting someone’s name on a street, on a school, on a public place, you’re sort of writing that person’s identity into the city,” Alderman said. “That’s what makes the renaming of these places pretty controversial.

“They’re interpreted differently or they’re felt differently, depending on whose side you are on within history,” he added.

Santa Fe Mayor Alan Webber ordered a de Vargas statue removed from Cathedral Park. But de Vargas’ name remains — not just on a privately owned mall but on a city street and park.

Webber said he is reviving a commission that will encourage a diverse array of people to share their views about the lingering reminders of the city’s complex past, such as potentially offensive monuments and markers.

It’s too early to say whether the panel also will look at the names of streets and public places that many object to, he said.

“One of the tasks of a Truth and Reconciliation Commission is to take stock of the issues of statues and other monuments,” Webber said. “We should try to look at these issues as a whole and have a communitywide conversation that gives consideration to all points of view.”

At the top of the list in Santa Fe is de Vargas, who led the resettlement of the city in 1692, a dozen years after the Pueblo Revolt ousted the Spanish from the area. De Vargas’ return is lauded by many in the community as a “bloodless reconquest.” But after Pueblo people later rebelled, de Vargas used violence to quell the uprisings. Indigenous people were killed and enslaved.

The name of Oñate, who settled near Ohkay Owingeh nearly a century earlier, appears throughout the state. It is on streets signs in Española, Santa Fe, Albuquerque and Las Cruces, to name a few.

Oñate is remembered for his brutal retaliation against the Acoma Pueblo people after they killed a dozen Spanish colonists. He ordered the slayings of as many as 1,000 Acoma members and imprisoned several hundred, amputating the right foot or toes — accounts vary — of dozens.

There are dueling petitions in Las Cruces on whether to rename Oñate High. As of Thursday, those who want to keep the name had gathered 1,724 signatures, versus 42 collected by opponents.

Pedro de Peralta, an early Spanish colonial governor, has a city thoroughfare named after him in Santa Fe and a prominent statue along the downtown street. Philip Sheridan, notorious for his brutal tactics in conflicts against Native people, has a short city street bearing his name.

Christopher “Kit” Carson, a frontiersman who killed countless Native people and led ruthless military campaigns against tribes, is commemorated with a monument in downtown Santa Fe. His name appears more prominently in Taos, where he is buried. Among his namesakes in the area are a small community, a town park, an electric cooperative and an entire national forest. A county in Colorado, a city in Nevada and a school in Sacramento, Calif., also are named for Carson.

Street and place names that pay tribute to objectionable figures are a more salient part of a city’s fabric and people’s everyday lives, Alderman said, so replacing them can be more fraught with emotion than toppling a statue.

A street name can be linked not only to a city’s heritage but to a person’s “place identity,” he said. If a person grew up or lived for a long time on a certain street, they could attach deep associations to the street’s name.

Sometimes people’s resistance to changing a street name is based on potential hassles, Alderman said, such as updating a voter registration, getting a new driver’s license and changing business letterhead.

But just as often, he added, this kind of resistance is a mask for their true grievance: not wanting a street to lose the name of their favorite Confederate general or Spanish conqueror.

Alderman said he believes any renaming effort should be the beginning of a conversation on systemic racism, not the end.

“It’s really at the tip of the iceberg of a lot of issues that should be dealt with,” he said.

People should ask themselves why they would want to retain the names of white oppressors when there are other more noble achievers they could choose, said Taylor Spence, a postdoctoral history fellow at the University of New Mexico.

Like monuments and statues, streets and public spaces belong to all citizens, he said, so people shouldn’t be forced to tolerate names they find demeaning.

The task of renaming should be done through an inclusive and rigorous community discussion, Spence said.

He noted some past name changes were done in a top-down manner, with elected officials deciding for the public.

In the 1990s, the Albuquerque mayor and City Council opted to change Stadium Boulevard to Avenue César Chávez and a stretch of Grand Avenue to Dr. Martin Luther King Jr. Avenue.

Still, he said, the effort was driven by a similar desire to add racial diversity to a cityscape.

“This may be just a reboot and an update for a new generation,” Spence said of the current movement. “It may also be the breakup of old power structures. Only time will tell.”

Efforts to change street and building names that reflect a racist past have been happening for decades, Alderman said. The newly energized Black Lives Matter movement is driving it now with an unprecedented intensity.

Public school districts in California are now going all out to purge objectionable building names, dramatically stepping up sporadic past efforts.

Charlotte, N.C., is among several Southern cities casting off the remnants of a history of slavery and racial prejudice by renaming certain streets and removing Confederate monuments.

In the 1990s, New Orleans also began replacing the names of Confederate generals and slave traders on public landmarks with those of civil rights heroes, Alderman said. The transformation continues.

Elizabeth Korver-Glenn, an assistant sociology professor at UNM, said she knows of no research that shows whether renaming places helps dismantle systemic racism, but she thinks the process should spur further dialogue and action to address the problem.

“As with monuments, place names are thus symbols not only of the individuals they commemorate but of a constellation of public actors and organizations that … continue to support the application of these names to public places,” she said.

Sanchez, of Tewa Women United, said she thinks the effort to eradicate names of controversial figures from buildings and streets is a positive move.

“It’s not like erasing the past because we have had a mixture of histories,” she said.

Vicente Roybal, a Pojoaque resident, countered that removing names is deleting history because long after they are gone from public view, they’ll be forgotten.

He pointed out New Mexico’s tribal people and local Hispanics have a complex, intertwined history and have coexisted peacefully for centuries.

He understands, though, why Indigenous people would view the names of Spanish conquerors and other figures as a painful reminder of a colonial past.

The process of renaming public streets and places should be discussed in a public forum with a wide variety of voices, Roybal said, rather than each side attacking the other on social media, as people have been doing in recent weeks.

Instead of trying to forget parts of history, Roybal said, “Let’s tell the whole story.”