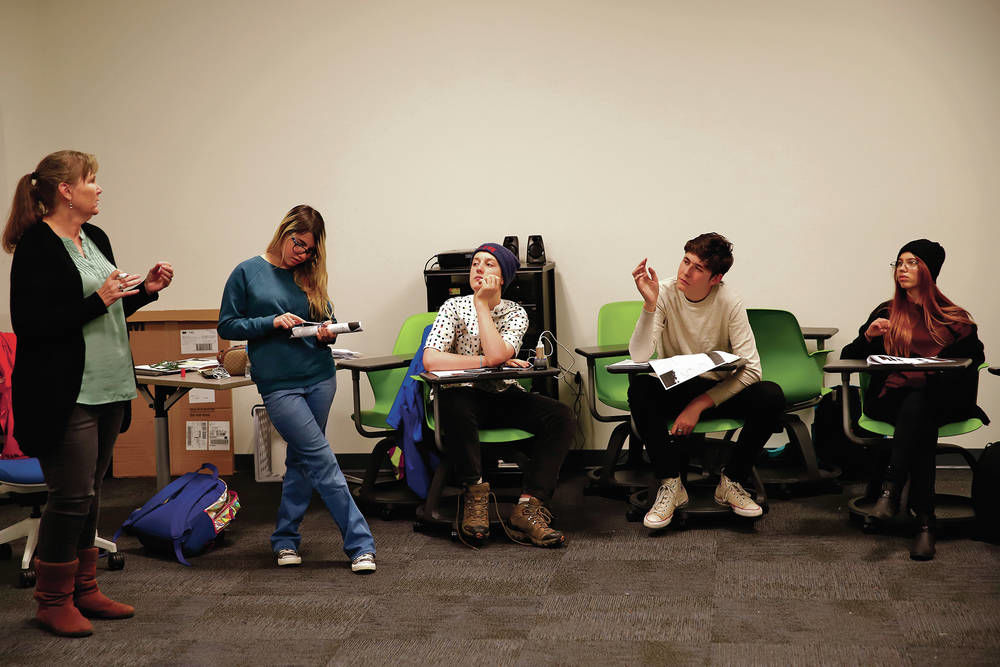 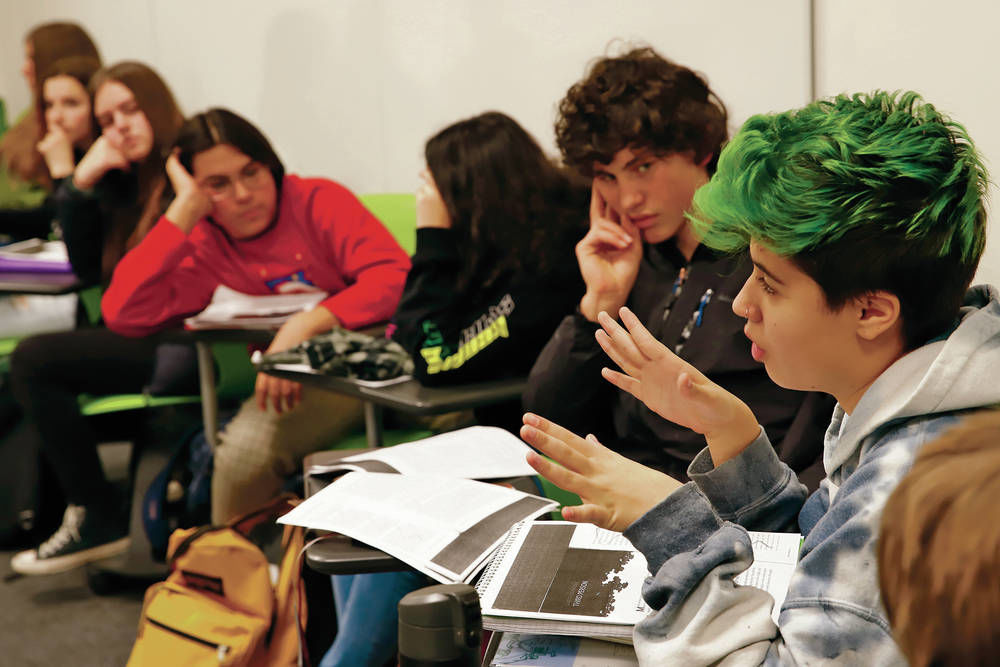 Marco Gallegos-Mikkelson, 15, right, discusses a piece of prose during a creative writing and literature class led by Denise Hinson at the New Mexico School For The Arts on Dec. 4. 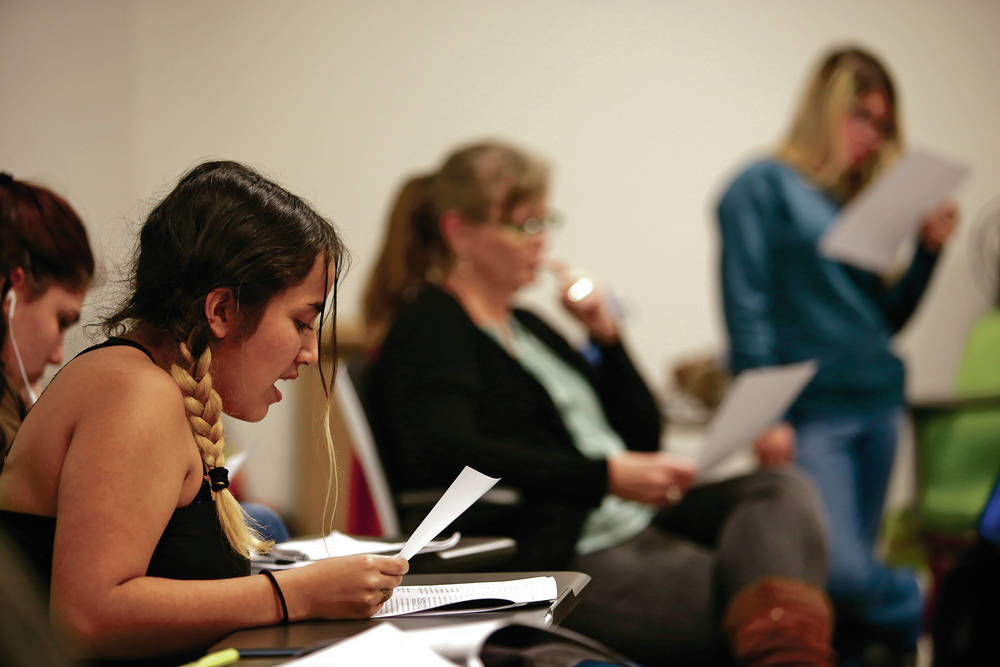 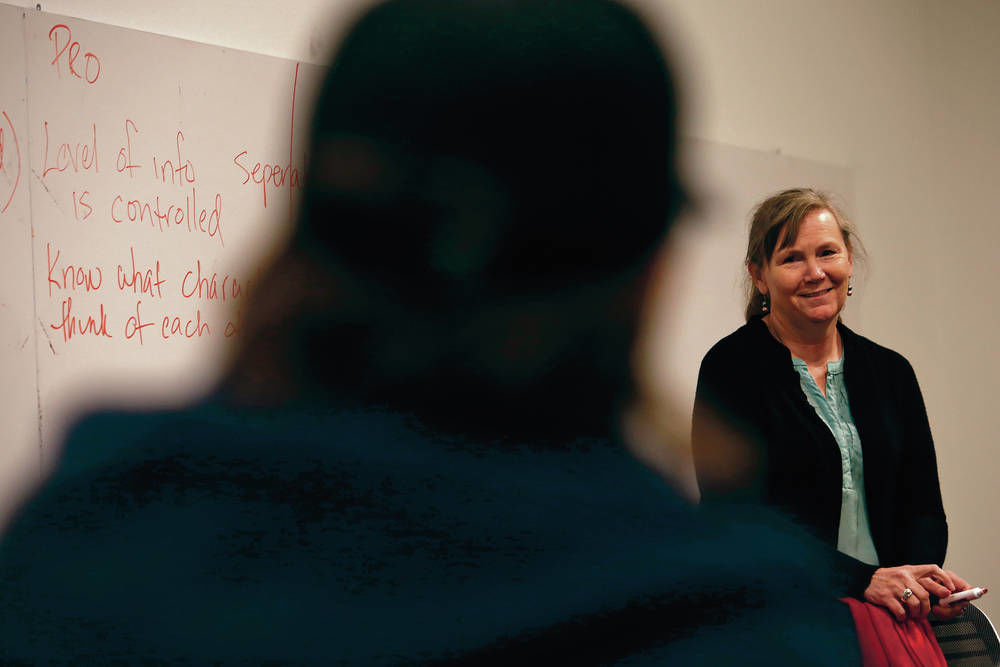 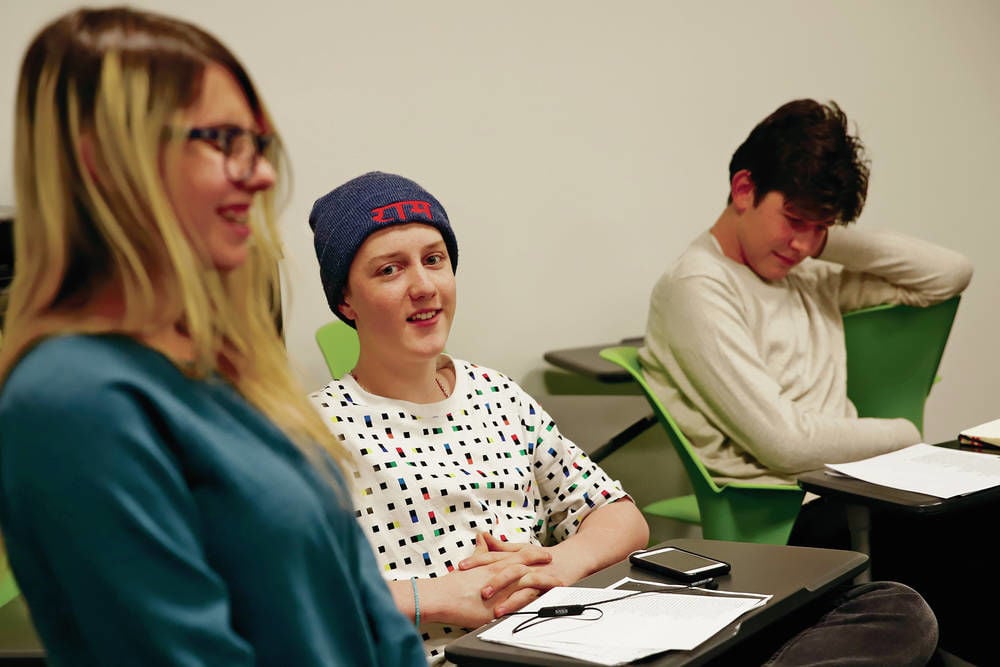 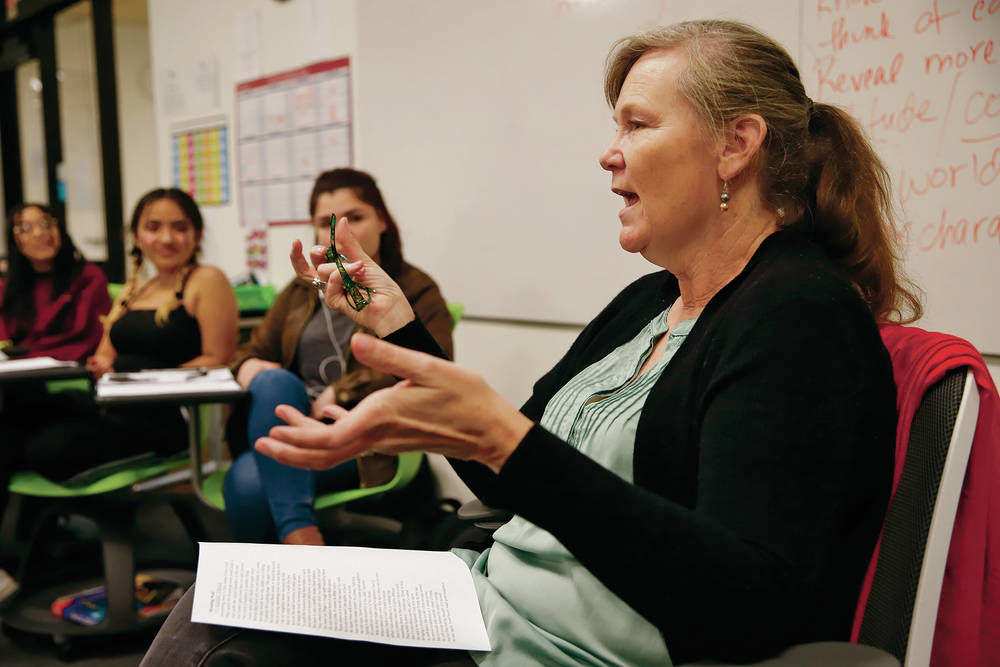 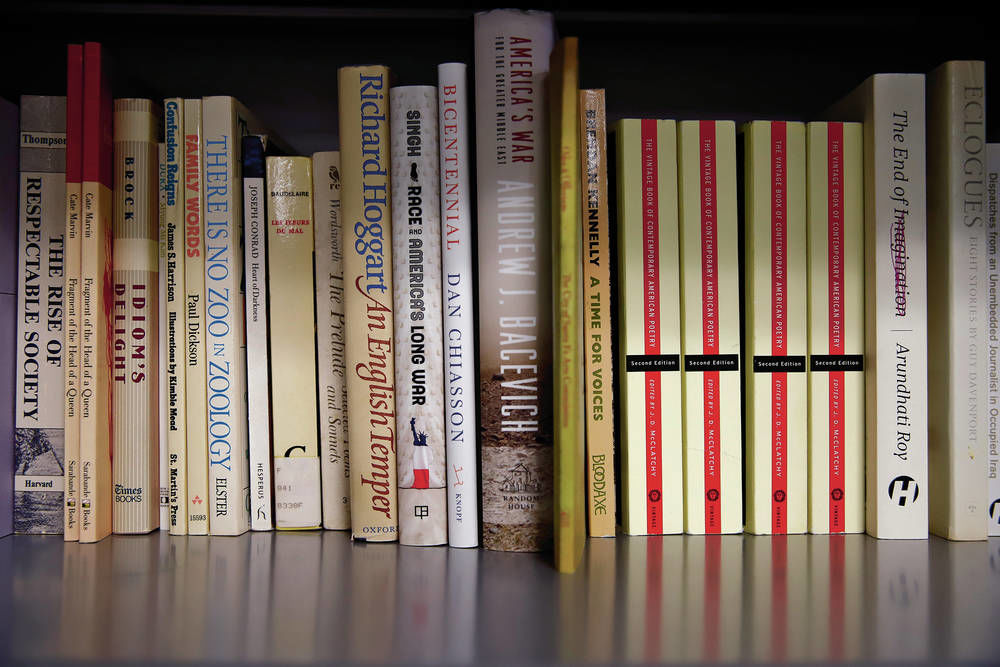 Marco Gallegos-Mikkelson, 15, right, discusses a piece of prose during a creative writing and literature class led by Denise Hinson at the New Mexico School For The Arts on Dec. 4.

As teacher Denise Hinson makes a list of the pros and cons of different perspectives, young creatives offer their own thoughts from a circle of desks.

One student notes how a story written with alternating first-person points of view can be confusing. Another calls standard third-person narrators boring.

The discussion then turns toward an action movie shot entirely with a GoPro, and a television series in which one actor plays two versions of the same person.

At New Mexico School for the Arts, 19 freshmen who grew up in the digital age are closing out the first semester of a new creative writing and literature major that offers the chance to study the disciplines through the lens of creators.

“English class tends to focus on grammar and structure and how to use a comma correctly,” said Alex Odom, a freshman from Santa Fe. “In this creative writing class, we go a lot more in depth on what it means to be a writer. What is the tone? How does the author set this up and make you think what they want you to think?”

The addition of a new major is just the latest in a year of changes at New Mexico School for the Arts, which in August moved to a new campus near the Railyard. The school’s nonprofit arm, the NMSA Art Institute, raised $30 million in private donations to renovate an old shopping center into the new space, which will allow New Mexico School for the Arts to eventually increase its enrollment 250 to 400 and its dormitory capacity from 30 to 60.

Through the clear glass wall of Hinson’s classroom, dancers glide through the halls, and musicians lug cellos on their way to one of the school’s other art programs — dance, music, theater and visual arts. At the School for the Arts, admission is based solely on a competitive audition and portfolio admissions process instead of academic criteria. The creative writing majors meet for three hours every Monday, Wednesday and Friday while Tuesday and Thursday are reserved for 90 minutes of poetry in a dual-credit program with instructors from the Institute of American Indian Arts.

In one early December afternoon, the discussion on perspective led into to dissections of a quick Robert Frost poem and a short story, which took about 20 minutes to read. As cellphones and apps replace novels and favorite authors for many high school students, Hinson said modern technology has hindered attention spans but not the quality of readers and writers.

“You have to do things in smaller bites; the story that took about 20 minutes was maybe a little long to read straight through in class,” said Hinson, who previously taught the school’s standard language arts classes. “As far as their analytic skills though, I don’t see that it hurts them at all.”

According to a study by the American Psychological Association on adolescent media use, high school seniors spent more than twice as much time online in 2016 compared to 2006. Also, the percentage of 12th grade students who read a book or a magazine every day declined from 60 percent in the 1970s to 16 percent by 2016.

“In free time, people resort to using technology for easy entertainment,” said Arwen Scarlata, a freshman from Taos. “In the past, people would have been more likely to be creative or read or go outside. Now people never read because they can just go online instead.

“My interest in creative writing now is very driven by a desire to do something that’s not an everyday thing for most people. It’s more complicated.”

Odom agrees, referencing the classic Fahrenheit 451 to hit home that he is in the right class.

“In that book, Ray Bradbury makes the point that how the difference between the zipper and the button is the lost time to think,” Odom said. “And I think we don’t have a lot of time to think in our society. Our major forms of communications are all very fast-paced and shortened, but you can still choose to take the time to create something meaningful.”

The inaugural creative writing and literature students will switch from poetry to playwriting in the second half of the year as they continue to find new ways to share their perspectives.

“There’s never anything personal in this age, nothing feels personal,” Scarlata said. “We’re all very disconnected, and I think good writing can sort of break through that.”

I'm 75 years old and I want to enroll in this program! When I grew up in a small Iowa town I often felt so alone experiencing life through an artist's eyes. Kids in this new school, soak up every morsel of the rich energy you are so fortunate to be a part of!