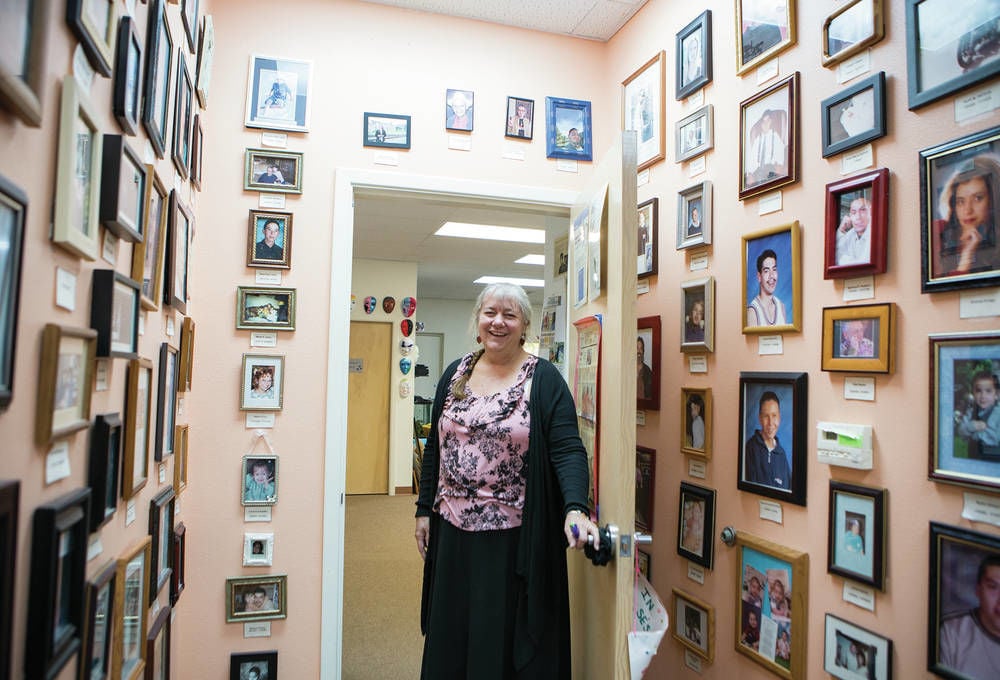 Ruth De Lay stands in the entrance of the main room at Gerard’s House. In the hallway are memorial photos. Olivia Harlow/The New Mexican 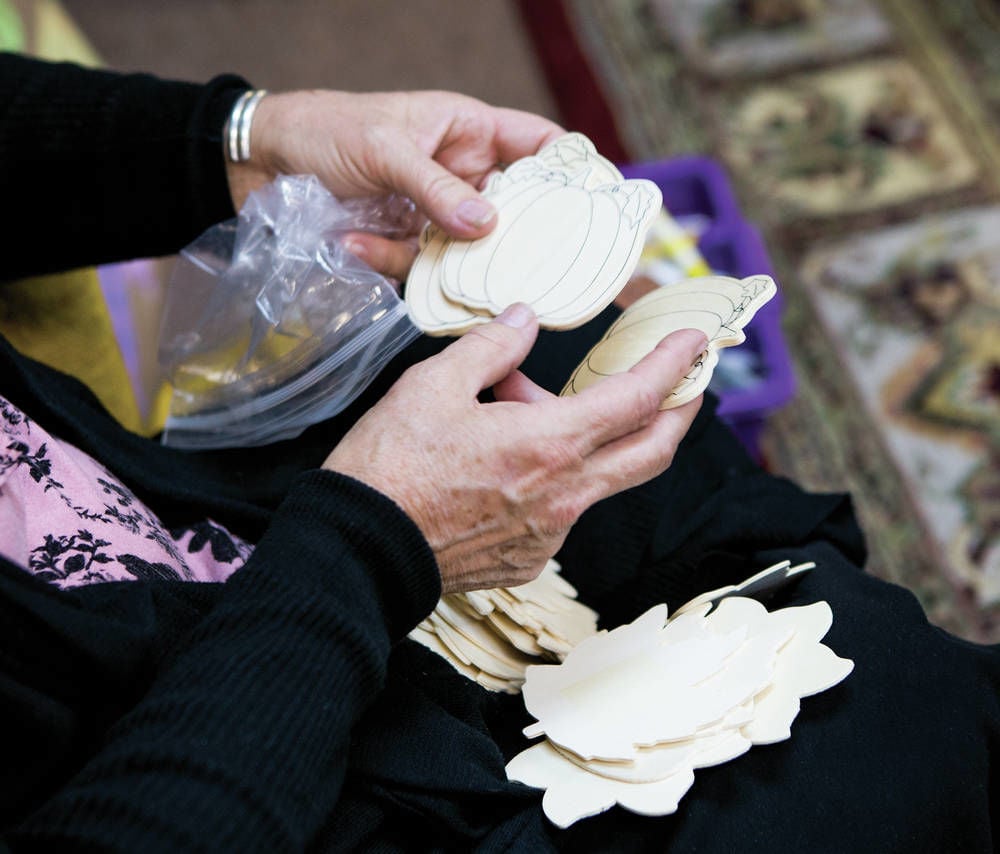 Ruth De Lay leads an art project in which children can write the name of the person they’re grieving on a pumpkin. Olivia Harlow/The New Mexican 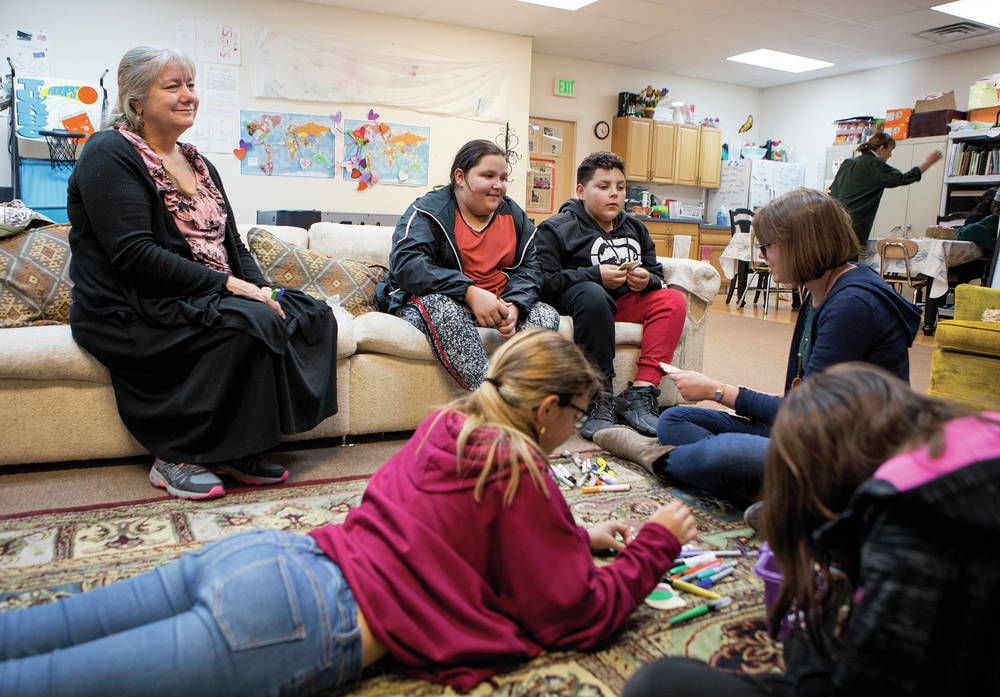 Ruth De Lay leads a session last month at Gerard’s House for children grieving the loss of loved ones. During the session, kids can create art projects that reflect on loved ones who have died. Olivia Harlow/The New Mexican

Ruth De Lay stands in the entrance of the main room at Gerard’s House. In the hallway are memorial photos. Olivia Harlow/The New Mexican

Ruth De Lay leads an art project in which children can write the name of the person they’re grieving on a pumpkin. Olivia Harlow/The New Mexican

Ruth De Lay leads a session last month at Gerard’s House for children grieving the loss of loved ones. During the session, kids can create art projects that reflect on loved ones who have died. Olivia Harlow/The New Mexican

Ruth De Lay is a crier.

Ruth De Lay is a listener.

Ruth De Lay is a survivor.

Since she learned she was chosen as one of the Santa Fe New Mexican’s 10 Who Made a Difference for 2019, it is obvious this kinder-than-kind woman from La Madera is still trying to figure out how to stand center stage.

In her own head, De Lay thinks she’s one of the Supremes — one of the women whose names almost no one knows. She has no idea how to be Diana Ross.

“I see myself as the backup singer,” says De Lay, smiling shyly. “I’m slowly taking it in.”

De Lay has been absorbing others’ pain at Gerard’s House for Grieving Children for more than 17 years — quietly listening as kids wrestle with the searing, almost unfathomable loss of a loved one. And, unfortunately, loss is all around: The Santa Fe nonprofit has provided grief services to more than 10,000 children in 22 years.

Not just anyone can provide comfort to the youngest among us — and for sure, only a special breed can make it a life’s work. Even fewer do it with a humility that almost defies definition. But those she’s counseled say De Lay’s empathy is akin to magic.

“It’s like a fairy godmother,” says Gerard’s House co-Executive Director Katrina Koehler, who has worked with De Lay since Koehler started with the nonprofit.

Sit with her for a few minutes, and it’s no wonder De Lay, 57, has been crucial at Gerard’s House. She is a world-class conversationalist and a nonpareil listener. With those two gifts, she’s been able to build a cocoon for kids whose worlds have been shattered.

De Lay can relate to the emotions of the children in her counseling groups, if only because she was one of those kids. Twice.

In 1972, when she was 10, De Lay’s father, John Gill, died when a plane carrying Los Alamos National Laboratory employees crashed after takeoff in Albuquerque. Two years later, her mother, Helen, suffered a fatal stroke, leaving six children — including Ruth, the lone girl — without a parent.

She recalls the “dark cloud over my life for a pretty long time,” but she also notes how lucky she was: She had family, including an older brother, Jimbo Gill, who seemed to be there at just the right moment.

“I don’t know what parts got me through,” she says. “Talking about it, I think, really helps.”

De Lay, married and the mother of three, doesn’t use her experience as a membership badge in the groups; she tells her story to children only if and when the time is right.

“It’s about the kids,” she says. “But if you model a little bit and they know a little bit, it helps them realize they can share.”

De Lay joined Gerard’s House in 2002 after seeing a newspaper story about the organization and its work with grieving children. Since then, she’s facilitated various support groups for children, helped at camps, trained volunteers and assisted crisis counselors at schools.

To hear De Lay talk about Gerard’s House, you’d almost think it gave her the gift rather than the other way around.

“I feel full,” she says. “I feel my heart is full when I leave and a kid shares something that they haven’t shared before. Or maybe they were just quiet and you can see them listening. There’s just all the pieces of it.

“I can almost see pictures of kids’ moments and their connections with each other. It’s that connection: ‘Oh, your dad died, too?’ You can see them connect with other kids.”

The connections with De Lay are just as strong. There are times when she’ll come across someone who’s been in one of her counseling groups. The bond is immediate.

“It’s everything,” she says of those unforeseen reunions, her eyes wet. “It’s amazing.”

Those who’ve seen it agree. “Kids just flock to her, just because she can project that kindness into the world,” says Maxine Swisa, a fellow facilitator at Gerard’s House.

Grief, for both the young and old, is an electron, always spinning and darting around someone who’s experienced it. De Lay still grieves the loss of two parents. But in an odd way, it also sometimes heightens her sense of gratitude for what she’s learned and those she’s helped.

De Lay decides to offer this tidbit about herself at the end of an interview as she talks about a decision to conduct just one counseling group in recent months. She’s stepped back, she says, because she was diagnosed with breast cancer. Fortunately, she caught it early, received amazing treatment, and was buoyed by family and the friends she’s made at Gerard’s House and just about everywhere else.

Listen closely: You can almost hear the backup singer belting out the melody, not just the harmony.

It’s the sound of a woman whose heart is full.

The New Mexican will host a dinner reception Dec. 4 at La Fonda on the Plaza for the 10 Who Made a Difference for 2019. The event will include short videos in which the honorees tell their stories in their own words. Tickets are available to the public for $85 at the Lensic box office, 505-988-1234, or ticketssantafe.org. We also will publish a special magazine Dec. 4 featuring the honorees.

35 years of honoring those who contribute to our community