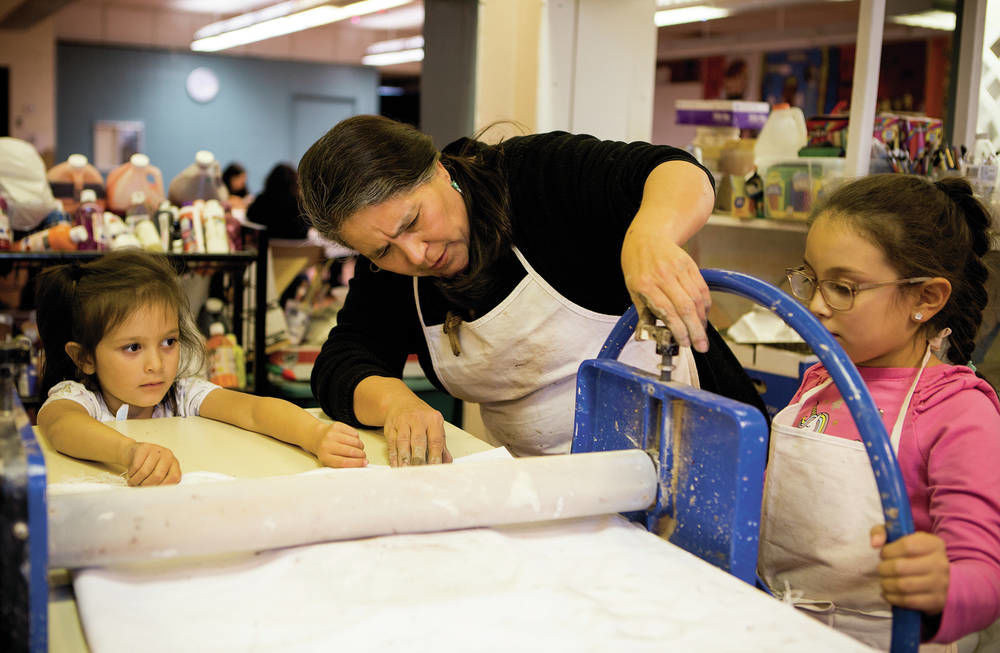 Gabriela Silva helps students cut clay earlier this month during an after-school arts program. ‘I get so much satisfaction here. I can’t wait to come to work in the morning,’ Silva said. ‘I just love what I do.’ Olivia Harlow/The New Mexican 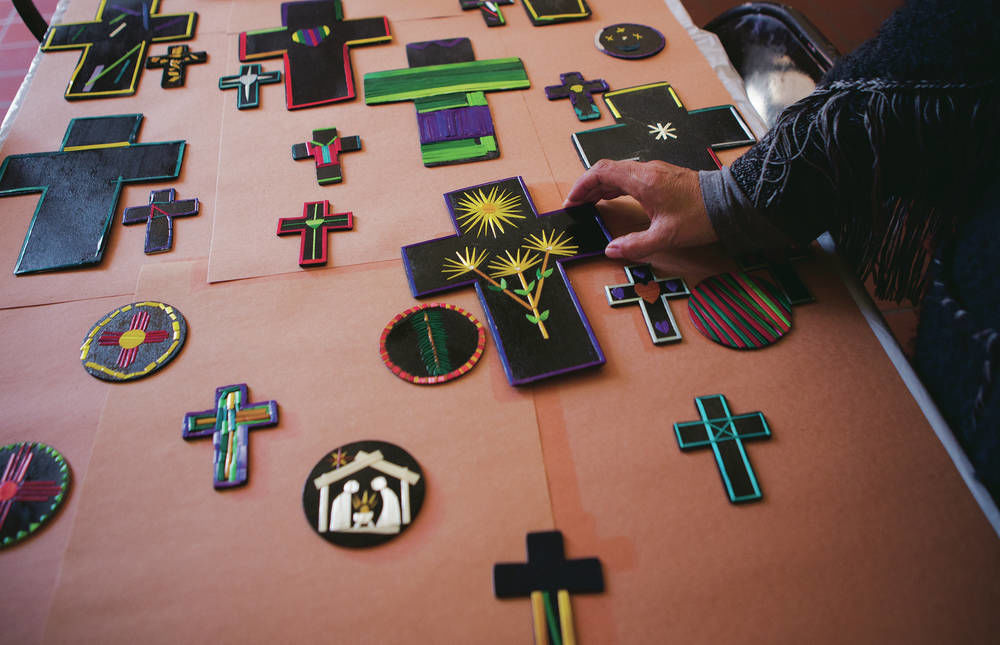 Gabriela Silva helps students cut clay earlier this month during an after-school arts program. ‘I get so much satisfaction here. I can’t wait to come to work in the morning,’ Silva said. ‘I just love what I do.’ Olivia Harlow/The New Mexican

Inside the education room of the Northern New Mexico Regional Art Center in Española, Gabriela Silva zigzags from one child to another as the group makes Christmas crafts.

“Ms. Gabby, can you help me?” one boy asks, waving an unfinished star-shaped ornament.

“Ms. Gabby, look at this,” a girl shouts, showing off a candy cane she has made from tin.

It’s clear Silva, 55, is in high demand during the nonprofit’s after-school arts program, offering words of encouragement: “Oh, it’s beautiful,” she echoes about 20 times to children ages 6 to 12.

Teaching children’s crafts is just a small portion of Silva’s duties as the art center’s executive director. She also spearheads adult art classes, leads tours in a nearby museum, manages the city of Española’s visitors center and its adjoining art gallery, and collaborates with other organizations to host community-centric events.

Silva, who has been named as one of the Santa Fe New Mexican’s 10 Who Made a Difference for 2019, says her mission is to help create community in Española, using art as a tool for connection.

“Art does have that power,” she says. “It’s coming together and creating something.”

Silva, born in Albuquerque and raised in El Paso, says she’s been an artist all her life and was first drawn to Española’s creative scene as a child, when she would visit Northern New Mexico with family. In 2006, she moved to the state full time, focusing on selling her artwork: paintings, frescoes and rosaries strung with dried roses she grows in her garden.

She then taught at charter and Montessori schools for six years, while volunteering at the Northern New Mexico Regional Art Center.

Since accepting the part-time executive director position at the Española center in January, Silva says, she is the most fulfilled she’s ever been. Each day, she strives to encourage local artists — young and old — to discover their full potential.

“I enjoy helping other people sell their work and see the beauty in their work,” she says. “There’s no greater feeling I’ve experienced.”

Silva’s paid workweek is from 10 a.m. to 4 p.m. Monday through Friday, but she regularly arrives around 7 a.m. and stays until at least 6 p.m. and works Saturdays, she said.

Some of her daily duties include managing the visitors center’s gift shop, which represents more than 180 regional artists and markets their work; running the Convento Art Gallery, which showcases a monthlong exhibit she both coordinates and curates; teaching weekly adult art classes and the after-school children’s program four evenings a week; and leading tours through the Misión Museum y Convento, a replica of the first mission church established by the Juan de Oñate expedition. The Convento Art Gallery boasts large-scale traditional artworks depicting the state’s history.

During her downtime, Silva attends to paperwork, emails, grant writing and planning exhibitions with local artists.

“There’s always something to do,” she says.

Outside of her responsibilities as the center’s director, Silva volunteers to host numerous events, such as an annual children’s night at the Santa Fe Opera — which includes a full dress rehearsal, tailgate party and dinner — and a monthly community painting night that features a gourmet meal. She often stays at the center until midnight to clean up, she says.

This time of year is especially busy for Silva. She is planning Española’s annual Christmas on the Plaza, an event at which a dozen local artists sell their work at the popular Electric Light Parade, as well as Las Posadas, a traditional dinner at the Convento that draws upward of 250 guests. Silva makes all the tamales.

Silva also spearheaded the first Art Academy Awards at the governor’s mansion, where she recognized more than 20 artists — including school-age children — for their creative efforts. She gave each artist who was nominated for an award a certificate and micaceous clay pot she made herself.

“I didn’t want anyone to feel left out,” Silva says, adding that everyone’s art is “beautiful in its own way. People create with their heart and you can’t take that away from them, ever.”

With such a busy schedule, Silva knows she has very little free time. She spends Sunday, her only personal day, selling homemade lotions, balms and rosaries at Santa Fe’s Railyard Artisan Market.

“The woman has unending energy and is always entertaining new ideas to accomplish a project or endeavour,” Carmen Rodriguez, who nominated Silva for the 10 Who Made a Difference award, wrote in her nomination letter. “… This is her gift to our community, and Gabriela is the happiest when she can share it.”

On a recent morning, when Silva was hanging posters in the art center’s gallery and reorganizing jewelry in its gift shop, her joy was palpable.

“I get so much satisfaction here. I can’t wait to come to work in the morning,” Silva said. “I just love what I do.”