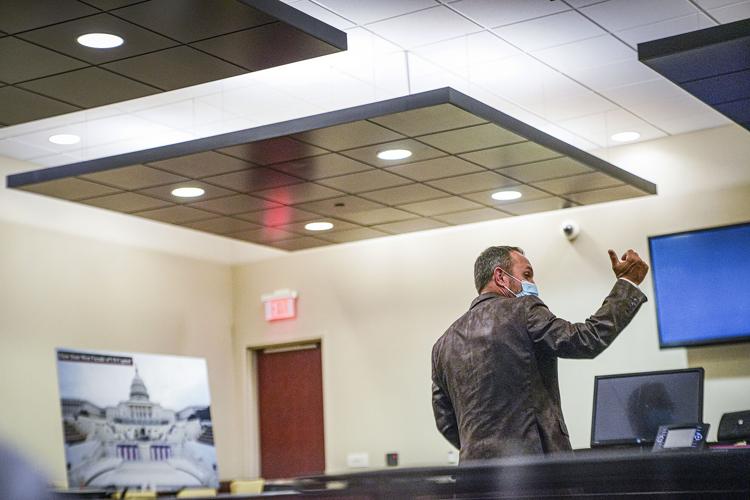 Couy Griffin, an Otero County commissioner and co-founder of Cowboys for Trump, makes his closing remarks in Judge Francis Mathew’s courtroom at the First Judicial District Court in Santa Fe last month. Mathew ruled Tuesday the Jan. 6, 2021, attack on U.S. Capitol qualified as an insurrection and that Griffin was ineligible from holding public office for having participated. 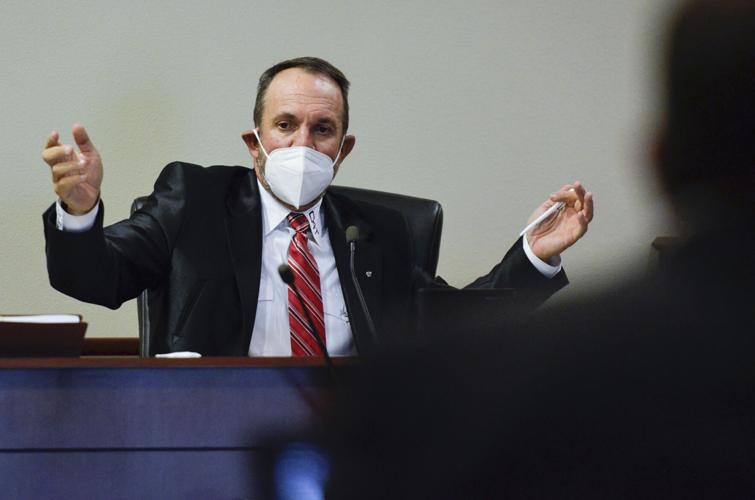 Couy Griffin, an Otero County commissioner and co-founder of Cowboys for Trump, answers a question from the prosecution Monday, Aug. 15, at the First Judicial District Court in Santa Fe.

Couy Griffin, an Otero County commissioner and co-founder of Cowboys for Trump, makes his closing remarks in Judge Francis Mathew’s courtroom at the First Judicial District Court in Santa Fe last month. Mathew ruled Tuesday the Jan. 6, 2021, attack on U.S. Capitol qualified as an insurrection and that Griffin was ineligible from holding public office for having participated.

Couy Griffin, an Otero County commissioner and co-founder of Cowboys for Trump, answers a question from the prosecution Monday, Aug. 15, at the First Judicial District Court in Santa Fe.

State District Judge Francis Mathew has ordered Otero County Commissioner Couy Griffin removed from his post and disqualified from holding public office for life after finding Griffin’s participation in the Jan. 6, 2021, attack on the U.S. Capitol amounted to insurrection.

The Cowboys for Trump founder had argued during a bench trial in a civil case last month he was only exercising his First Amendment rights when he traveled to Washington, D.C., and clambered over three barriers to gain access to a platform outside the Capitol, where he cheered on a mob forcibly trying to enter the building as police attempted to hold the crowd back.

A federal judge in March convicted Griffin of trespassing during the rioting. He was acquitted of a count of disorderly conduct. He was sentenced in June to 14 days of incarceration but received credit for 20 days he already had served after his arrest.

Mathew didn’t accept Griffin’s argument in the civil case, in which plaintiffs successfully sought to remove him from office. The judge wrote in his ruling, issued Tuesday, Griffin’s attempts “to sanitize his actions are without merit” and are contradicted by evidence in the case.

“His protestations and his characterizations of his actions and the events of January 6, 2021 are not credible and amount to nothing more than attempting put lipstick on a pig,” the judge wrote.

“The irony of Mr. Griffin’s argument that this Court should refrain from applying the law and consider the will of the people in District Two of Otero County who retained him as county commissioner against a recall effort as he attempted to defend his participation in a mob whose goal, by his own admission, was to set aside the results of a free election by the majority of the people of the entire country (the will of the people) has not escaped this court,” he added.

Griffin called the ruling a “disgrace” Tuesday and said it was politically motivated.

“I was shocked this morning when the county manager called me and told me they had already been in my office and confiscated my computer,” Griffin said. “That they had already changed the code on the door ... and that I’m no longer a county commissioner.”

Griffin said he plans to appeal the ruling, in part on the grounds that Mathew did not have jurisdiction to remove him from office and the plaintiffs didn’t have standing to bring the petition because they weren’t from Otero County.

The nonprofit Citizens for Responsibility and Ethics in Washington, also known as CREW, wrote in a statement Tuesday, “This decision marks the first time since 1869 that a court has disqualified a public official under Section 3, and the first time that any court has ruled the events of January 6, 2021 an insurrection.”

Three New Mexico residents — Marco Alarid White and Leslie LaKind of Santa Fe and Mark Mitchell of Los Alamos — filed the petition against Griffin in March with support from CREW.

CREW chief general counsel Donald Sherman said Tuesday his wife is from New Mexico, “and through the process of identifying whether we could bring a claim against Mr. Griffin we were connected with people who felt as strongly as we did about Mr. Griffin’s conduct ... and were interested in being the main plaintiffs in the case.”

CREW counsel and the Albuquerque-based law firm Freedman Boyd Hollander and Goldberg petitioned the court on behalf of the plaintiffs to remove Griffin from office on the basis of Section 3 of 14th Amendment to the U.S. Constitution, which calls for anyone who has taken an oath to uphold the Constitution to be barred from office for engaging in insurrection or rebellion or giving aid or comfort to the nation’s enemies.

White — a 26-year-old law student from Santa Fe — said he reached out to attorneys in the case after hearing a lawsuit might be in the works.

He’d been following Griffin in the news, White said, and was excited about the prospect of being involved in a case that would hold to account someone he felt had been representing New Mexico in a poor light.

“I had been aware of Couy Griffin as a kind of provocateur before the insurrection and especially after,” White said. “He was making a lot of hay being one of the most visible Trump supporters in New Mexico and was willing to say and do whatever it was that grabbed the public’s attention and got him attention, no matter what the implications were.”

White said he was struck by a comment Griffin made in May 2020 at a Cowboys for Trump rally in Truth or Consequences: “The only good Democrat is a dead Democrat.”

White said he was “ecstatic” to see Mathew had ruled the events of Jan. 6 were indeed an insurrection.

The other two plaintiffs did not respond to a request for an interview through CREW.

Griffin said, “In my opinion, this should never have gone to trial.”

He initially was represented by an attorney but ended up representing himself at trial. However, he attempted to file motions in the case he said had been written by a friend.

“I had strong motions for dismissal filed before trial that judge Francis Mathew threw out on the grounds that I didn’t write them,” Griffin argued.

Under New Mexico law, “any private citizen of the state may file a lawsuit to remove a disqualified county official from office,” CREW said in a news release Tuesday.

“Judge Mathew’s decision is fully supported by the facts and the law and justice,” Joe Goldberg, an attorney who argued the case before Mathew, said in the statement.

Mathew’s 49-page ruling cited Griffin’s actions and words before, during and after the events of Jan. 6, 2021 — as laid out during his two-day trial in August — as evidence of his insurgency.

Griffin appeared alongside the New Mexico Civil Guard — a group sued by the state in a lawsuit accusing of it being an illegal armed force — and other “violent specialist groups” ahead of the event, the judge wrote.

Mathew also noted Griffin aided the Stop the Steal movement as a featured speaker on a multi-city bus tour to “inflame crowds” and encourage people to go to Washington and stop the peaceful transfer of power from former President Donald Trump to President Joe Biden.

During that tour, the judge wrote, Griffin called on supporters to deny the results of the presidential election and used language that encouraged and normalized the use of violence to achieve political objectives.

In one Jan. 4 speech in Atlanta, the judge wrote, there was video evidence Griffin “anticipated possible violence” in D.C., and said he was “calling men from across our nation ... because it might be a battle.”

Griffin’s argument that such statements were political rhetoric weren’t believable, the judge wrote.

“At the time Mr. Griffin made these statements, he did not clarify he was referring only to lawful activity,” Mathew wrote in his ruling,”and the language and context ... strongly indicates his intent was to mobilize a violent mob. ... The Court finds that Mr. Griffin’s after-the-fact characterization of his prior statements were self-serving and not credible.”

Upon gaining access to the West Terrace of the Capitol, the judge wrote, Griffin used a bullhorn to encourage an unruly mob “even after seeing members of the mob a short distance away attack police officers and violently try to break into the Capitol building.

“And he remained even after law enforcement ordered the mob to disperse and deployed tear gas, pepper spray and chemical munition to make them do so,” the judge continued.

“Mr. Griffin knew he should not have been at the Capitol,” the judge wrote, but “he stayed in support of the insurrection.”

It’s unclear how the ruling might affect actions Griffin took while serving as a county commissioner since then.

Griffin — who was not running for reelection and whose commission term would have ended Dec. 31 — said Tuesday he had no intention of seeking another elected office.

But, he said, if Donald Trump were to be elected president again, he would be interested in an appointed position — perhaps in the Department of Agriculture or Department of the Interior — in which he could continue his political activism on issues including immigration, gun laws and abortion rights.

Grieving the loss of a beloved pet

A shocking loss; a chance to create a conversation