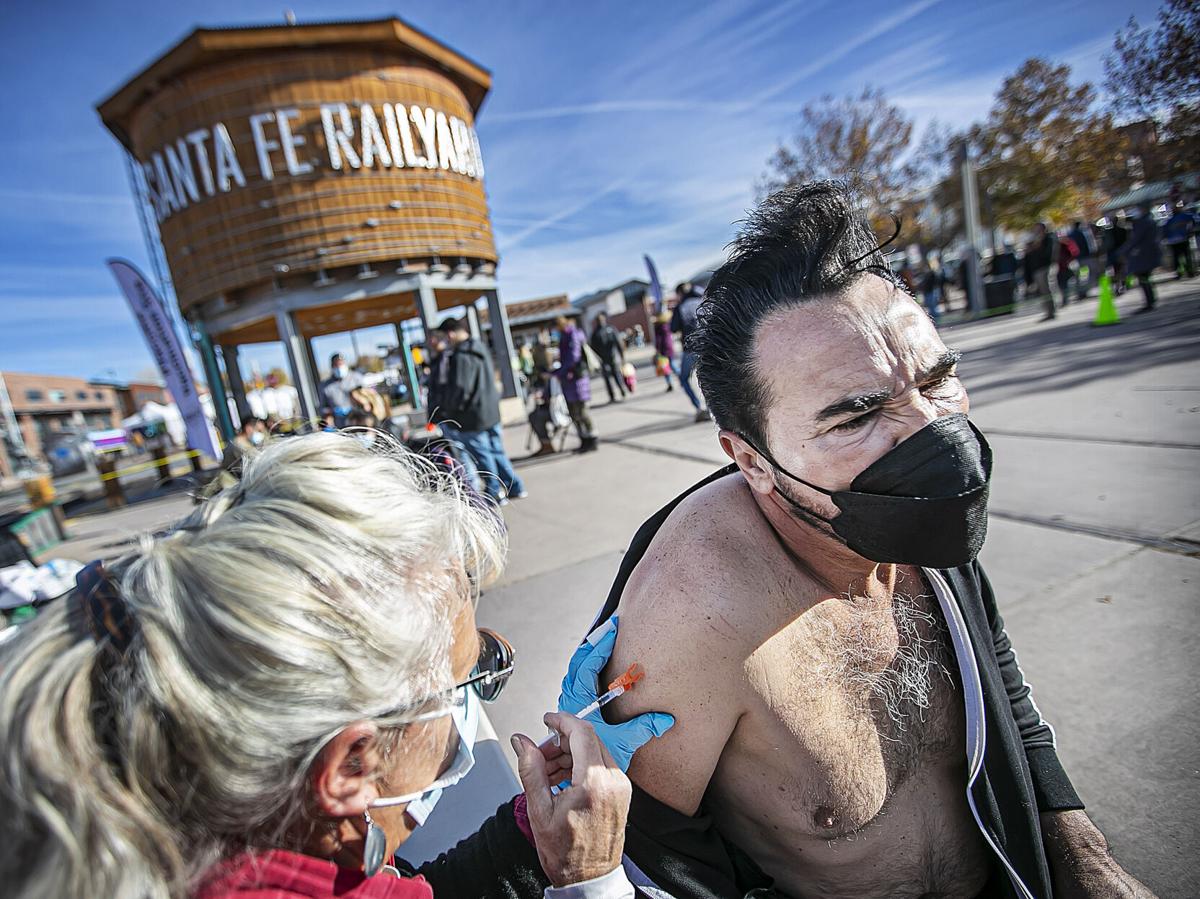 Sharon Argenbright, left, gives Joe Martinez a booster shot during a COVID-19 vaccine clinic Saturday at the Railyard water tower. Hundreds lined up to get a jab at the free event which was staffed by the National Guard and the New Mexico Department of Health. 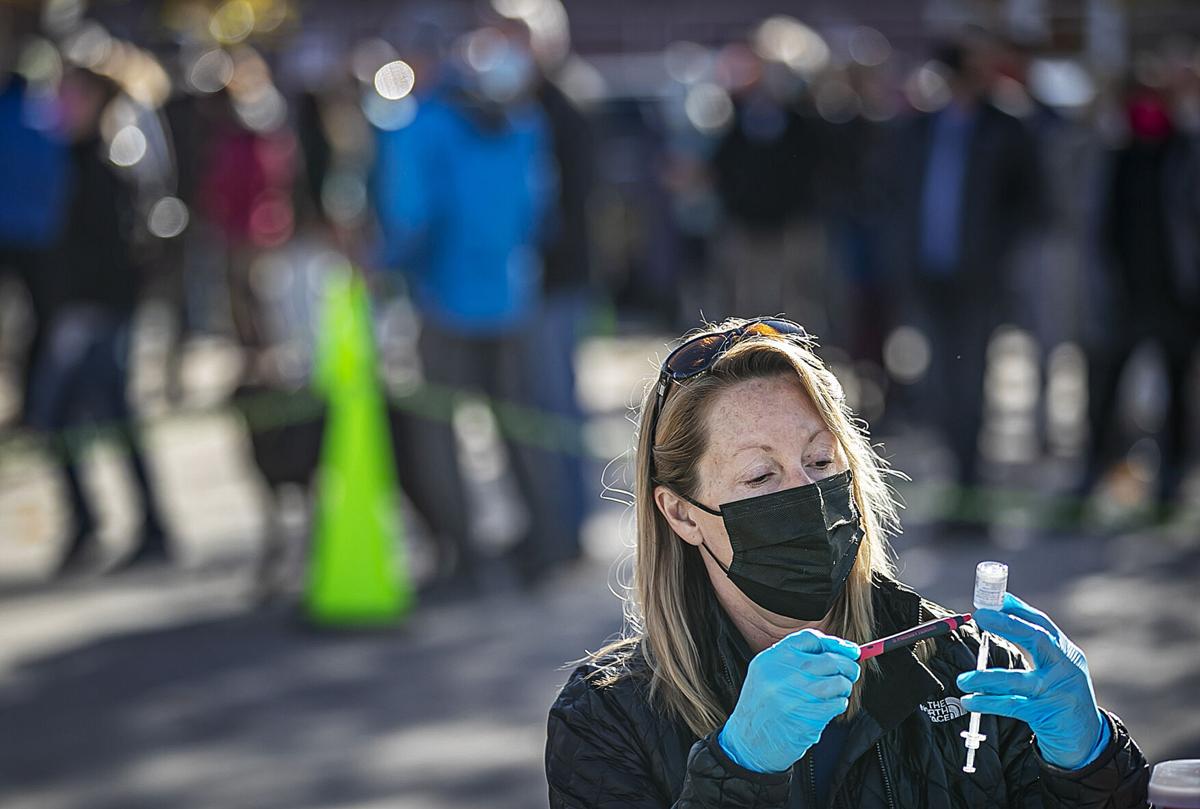 Sharon Argenbright, left, gives Joe Martinez a booster shot during a COVID-19 vaccine clinic Saturday at the Railyard water tower. Hundreds lined up to get a jab at the free event which was staffed by the National Guard and the New Mexico Department of Health.

Hundreds stood in line for COVID-19 vaccines — some for more than an hour — Saturday morning at a pop-up clinic in the Santa Fe Railyard, following a week in which nearly 10,000 new cases were reported statewide.

With boosters now available for anyone 18 and older, authorities said they expected their roughly 1,000 available doses would be in people’s arms before the day’s end.

Santa Fe resident Marcy Albin said she arrived at 9 a.m. to get a booster shot and didn’t have an appointment.

Albin manages a glass studio and said, “I’m taking precautions because I deal with out-of-town tourists every day.”

The outdoor clinic was run by members of the Air National Guard and Army National Guard, as well as medical personnel from Rapid Temps, a medical staffing company.

“We have about 600 confirmed appointments, and the balance is going to be walk-ins,” said Tech. Sgt. Dominick Zuniga, who was in charge of the operation.

Medical staffers were offering first doses, second doses and booster shots of all three manufacturer types of vaccine at the event, which was set to run from 9 a.m. to 1:30 p.m. Registrations were available through the New Mexico Department of Health website.

Matt Dirmyer, 40, who works as a materials scientist at Los Alamos National Laboratory, had been waiting in line for 50 minutes to get his booster shot. He said he was doing so to protect everyone in the community, and because “my mom’s coming to visit soon.”

Tyler Cade, 31, arrived just before 9 a.m. for a booster shot, “because I don’t want to kill anybody.”

Megan Reneau, 28, recently moved to Santa Fe from Albuquerque. She said she had been waiting for her booster shot for an hour and 13 minutes.

“I have a timer,” she said. “I am immunocompromised. I work with the public in a medical environment, so I need it.”

The Railyard has been hosting vaccine clinics during its outdoor events for months, working with the Federal Emergency Management Agency and, later, with the National Guard.

“All of a sudden, it’s exploded,” said Sandra Brice, events and marketing director at the nonprofit Santa Fe Railyard Community Corporation. About 400 vaccine doses were administered there last week, she said.

“It’s probably a mix of winter coming, everybody really knowing that the boosters are available to everybody and word finally spreading,” Brice said.

Another pop-up clinic is planned next Saturday at the Railyard. December events are possible, Zuniga said.

Santa Fe bookkeeper Michele Ryan, 53, said she had been waiting for a booster shot for about an hour.

“I’m really afraid of the delta variant,” she said. “And I think it’s important to take care of myself. I don’t want to get sick.”

Given the seriousness, these shot clinics should be better organized rather than looking so ad hoc.

My partner signed up for a booster shot, also at 11. He was there early and called me from the line to tell me he would be there for hours based on how far back he was (many long loops away) and how slow everything was moving. Since he could not lose his place in line to find someone who might be able to answer some questions, I drove over to the Railyard to see if there was a way for those who signed up for appointed times with the DOH could get through in a timely manner. Parking almost at St. Francis because of a density of cars and people, It took me a bit to reach the site. I went to the beginning of the line and asked the National Guard man who stood letting people through to the register area why there was not separate lines for walk-ins and appointments for those who took the time to register per the DOH system. He got very huffy and told me the National Guard was in charge and not the DOH there. When I asked if anything could be done he shouted that he was military twice and a woman standing with me wanting to ask the same question looked at me and said it was hopeless and to just walk away. Since I had also called different pharmacies to see if they were allowing registered people to go to their sites and the answer was they were a month out, I advised my partner to stay in line or he would never get a booster because the system was completely in disarray. He stayed in the line and finally got his booster almost 3 hours later. What a shame that this State cannot find a solution to giving out shots in an orderly and humane manner. Having a national guard man yell in my face about power and military might was ridiculous and just added to the unpleasant situation.

This is very sad to hear. Thank you for speaking the truth about this event, this story does not capture what really went on.

Sadly, this was a poorly planned, uncoordinated event. I had an 11:00 appointment. Appointments were not being honored. I was told to get to the back of the line which had a couple of hundred people. Someone who had just got to the front of the line said it took 2 hours. There was no division of lines - one for those who went by the NMDOH rules and scheduled a time and another for the walkups. No consideration for the elderly. I had to leave without the booster due to time restraints. There were many upset people trying to get an answer about their scheduled time, which were not forthcoming. So if you plan to make an appointment online for the next such event at the Rail Yard - don't bother.

This is a sad reminder of how poorly organized all the vaccinations have been in NM, and why so many went to other states early on in this mess. It hasn't changed.

My goodness the wackadoodle conspiracy theory nonsense gets old.

And then there are those who believe the Guv'ment is all-knowing, all good; (Robot voice)

"we are here to help, please remain calm, you are safe now".

Why does big pharma have immunity when shot is called safe? Because they, big pharma, are immune from lawsuits? What a deal! AND billions in profit? I know, questions are not welcomed. Obey your masters!