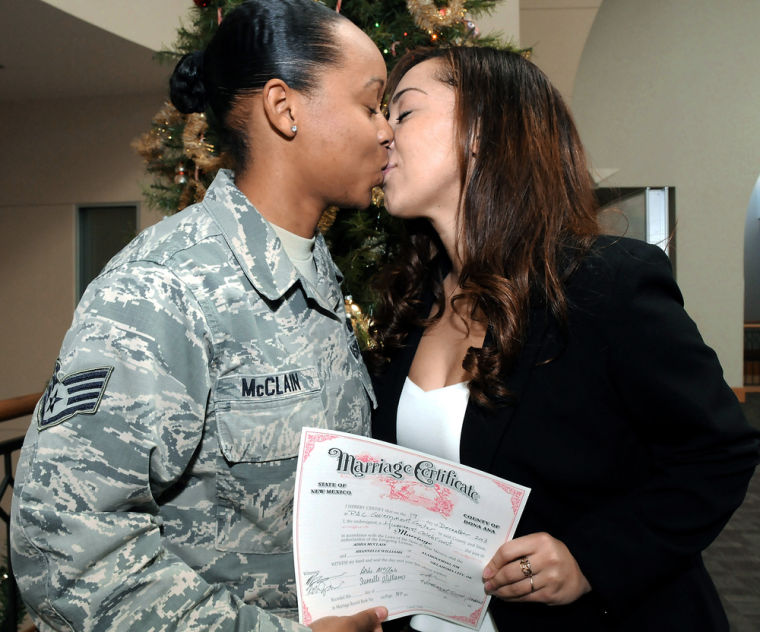 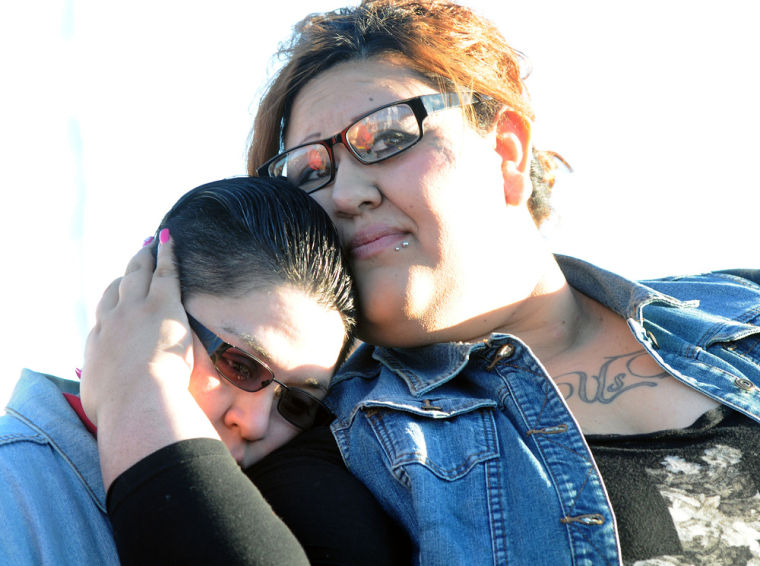 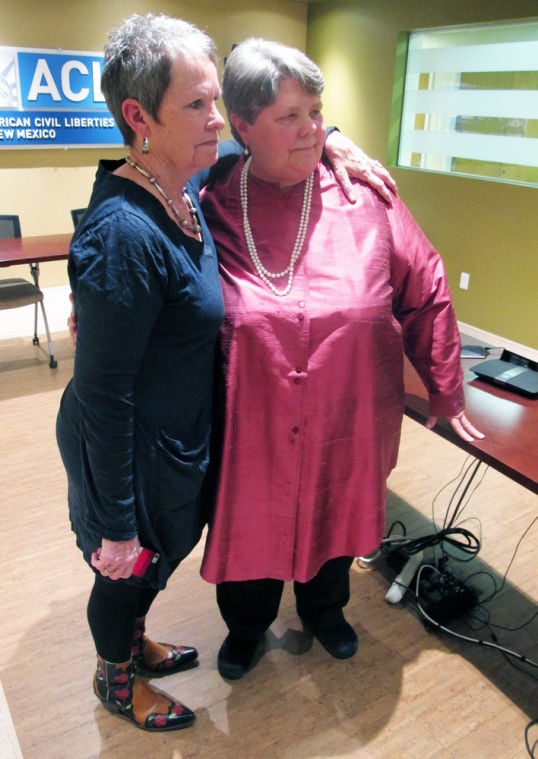 Miriam Rand, 64, left, and Ona Porter, 67, both of Albuquerque, talk to reporters Thursday after the New Mexico Supreme Court declared it was unconstitutional to deny marriage licenses to gay and lesbian couples in the state. The couple were part of a lawsuit that brought the case before the state’s highest court. Russell Contreras/The Associated Press 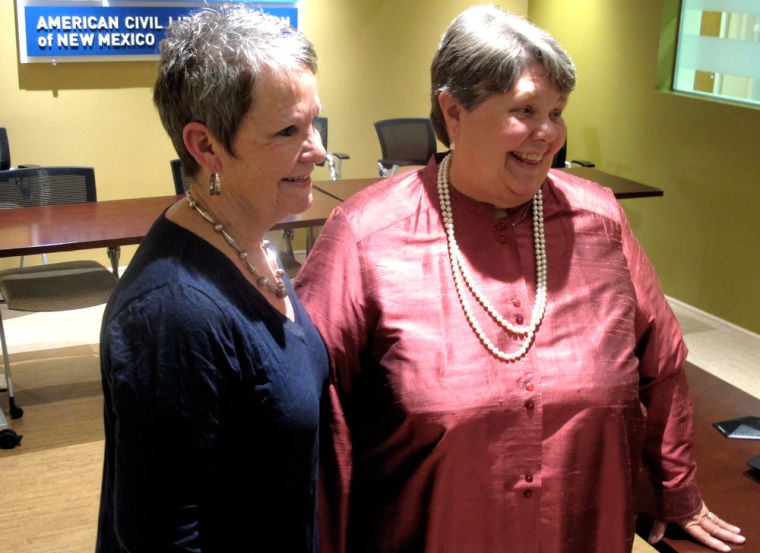 Miriam Rand, 64, left, and Ona Porter, 67, both of Albuquerque, N.M., talk to reporters Thursday, Dec. 19, 2013, after the New Mexico Supreme Court declared it was unconstitutional to deny marriage licenses to gay and lesbian couples in the state. The couple were part of a lawsuit that brought the case before the state's highest court. (AP Photo/Russell Contreras) 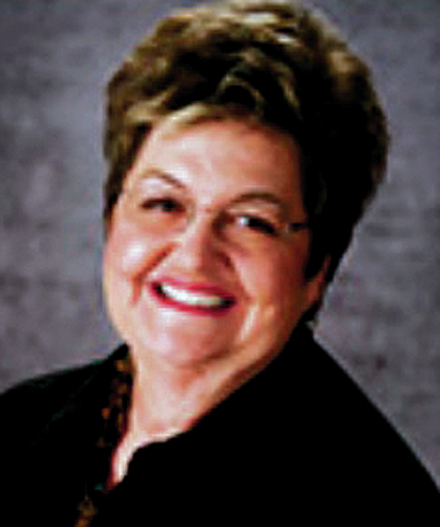 Carl Smith of Las Cruces holds up a sign in support of same-sex marriage as Jean Berlowitz, left, waves a flag during a rally to celebrate the New Mexico Supreme Court ruling on Thursday. The state’s highest court declared it was unconstitutional to deny marriage licenses to gay and lesbian couples. Robin Zielinski/The Las Cruces Sun-News

Miriam Rand, 64, left, and Ona Porter, 67, both of Albuquerque, talk to reporters Thursday after the New Mexico Supreme Court declared it was unconstitutional to deny marriage licenses to gay and lesbian couples in the state. The couple were part of a lawsuit that brought the case before the state’s highest court. Russell Contreras/The Associated Press

Miriam Rand, 64, left, and Ona Porter, 67, both of Albuquerque, N.M., talk to reporters Thursday, Dec. 19, 2013, after the New Mexico Supreme Court declared it was unconstitutional to deny marriage licenses to gay and lesbian couples in the state. The couple were part of a lawsuit that brought the case before the state's highest court. (AP Photo/Russell Contreras)

Webb declined to say why they quit. But county commissioners said it was in protest of Thursday’s Supreme Court ruling declaring it unconstitutional to bar same-sex couples from getting marriage licenses.

Commissioner Bill Cathey said the two had made it clear they would quit “rather than be associated with that.”

Webb says the Clerk’s Office is closed until the commission meets Monday to hire a replacement.

Carpenter doesn’t have a current phone listing, and there was no answer Friday at a listing for Collins.

Roosevelt is a rural, conservative county along the Texas-New Mexico border. Its county seat is Portales, a town of about 12,000.

“She told us in the past that’s what she would do,” he said. “… I am personally very disappointed in the decision of the judges, and I don’t blame our clerk for doing what she did.”

Still, he said he was confident the commission would be able to appoint a replacement on Monday who would follow the court’s order.

Meantime, other rural counties began issuing marriage licenses to gay couples following the Thursday ruling, which came after county officials had asked the high court to clarify the law and establish a uniform state policy on gay marriage.

“We’ve been waiting for seven years. It’s the best day of my life,” said Toadlena, who plans to change her last name to Velasquez. “Everything I wanted was given to me today.”

Historically, county clerks in New Mexico have denied marriage licenses to same-sex couples because state statutes include a marriage license application with sections for male and female applicants.

However, the state’s more populous counties this fall began issuing licenses on their own and in response to lower court rulings. A few rural counties also followed suit, but most of the smaller counties were awaiting a final decision from the high court.

Despite the ruling, gay marriage opponents are vowing the fight is not over.

State Sen. William Sharer, a Farmington Republican, said he will ask the Legislature in January to put to voters a constitutional amendment that would ban gay marriage.

It’s unclear how much traction Sharer’s proposal, which bucks a growing national tide toward legalizing gay marriage, will have come January. New Mexico is the 17th state to recognize the unions.

The Democratic-controlled Legislature repeatedly has turned down proposals for a constitutional amendment to allow voters to decide whether to legalize gay marriage.

And Gov. Susana Martinez, a Republican who has opposed same-sex marriage, said she would have preferred to see voters, not the courts, decide the issue. She urged New Mexicans to “respect one another in their discourse” and turn their focus to other issues facing the state.

“As we move forward, I am hopeful that we will not be divided, as we must come together to tackle very pressing issues, like reforming education and growing our economy, in the weeks and months ahead,” Martinez said.

While I don't agree with their views, I respect they stepped off versus doing something they honestly didn't agree with.

And just how does State Sen. William Sharer plan to make his bigotry "constitutional"? What a jackass!!!

This entire issue boils down to EQUAL rights, not special rights. Why should someone who pays the same taxes, breathes the same air, and is a human being (just like YOU), not have the same rights and protections that you do??? Because of who they love? PLEASE! And spare me the sanctity of marriage crap..... If it's about that, outlaw divorce!

Good riddance to these two ladies. There are plenty of out of work New Mexican's who need good jobs and would be happy to take over. As for Bill Sharer, R-Farmington, doesn't he have better things to do, are there not more pressing problems in NM he can address? Do your real job Bill, aiding New Mexican's. Lastly, while not a fan of our Governor, she gets points in my book for saying "we must come together to tackle very pressing issues, like reforming education and growing our economy, in the weeks and months ahead". As a man, married 24 years to a woman, the marriage of gays or non gays doesn't affect me one bit, how could it? If you are against gays getting married, don't marry one. This is completely a non issue.

While I am disappointed that this public servant can't see the error in her beliefs I do applaud that she resigned based on something she stands for. While places like Doña Ana, Santa Fe and Bernalillo Counties are no "picnics" when it comes to equal rights, at least there is an understanding that the state of New Mexico isn't in a vacuum of sorts when it comes to acknowledging the changing world.

How sad that people must come to positions that require this to happen. I am old enough to remember when people in the South would quit a job rather than work with black folks. The they would go on the dole and others help support them. To feel such hatred toward others that you would quit a job “rather than be associated with that.” expresses the current conditions in Russia. But, we have come to expect such hated in that country. I for one, hope the the new year will bring about a new Christian attitude in our county. One that cares about all folks regardless of their color, beliefs or circumstances. That was the message expressed by Jesus throughout his short life 2,013 years ago. It is time for America, which calls itself a Christian nation to begin to respect that message and emulate the teacher.

It takes a lot of courage for what these public official's did and i applaud their moral decision to leave their jobs. As public official's of that county, especially in rural New Mexico, their decision to protest the NM Supreme Court ruling is acceptable to the majority who also support their point of view on the matter. Their convictions are solid in God's eyes and no one on this earth can dispute it, because the decision belongs to them and not no one else, period!

Probably best that they did resign.

They should be true to their convictions in all respects.....make sure the grocer, the nurse, the doctor, the merchant, the florist, etc. is not gay. If they take services from gay people they may turn gay! How dumb can people be. They probably say they are "Christian" too. What a crock!

Take your victory graciously without rubbing salt in the wounds!
[ohmy]

Good for these ladies. I am not agreeing to or opposing the ruling. Just saying if these ladies feel that strongly about the issue they did the right thing. We all need to stand up for things that are important to us.