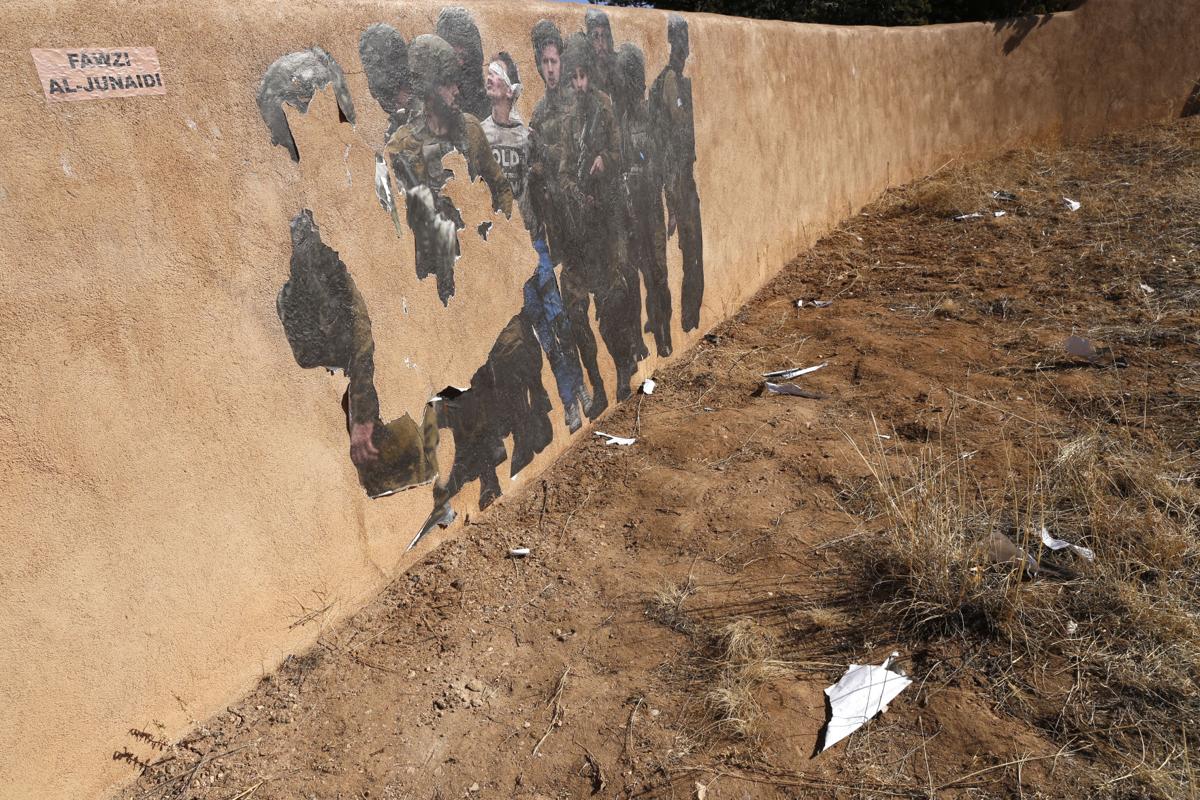 Graffiti depicting Israeli forces and Palestinian civilians at the corner of Old Pecos Trail and Camino Lejo on Monday. The art work appears to have been partially defaced. 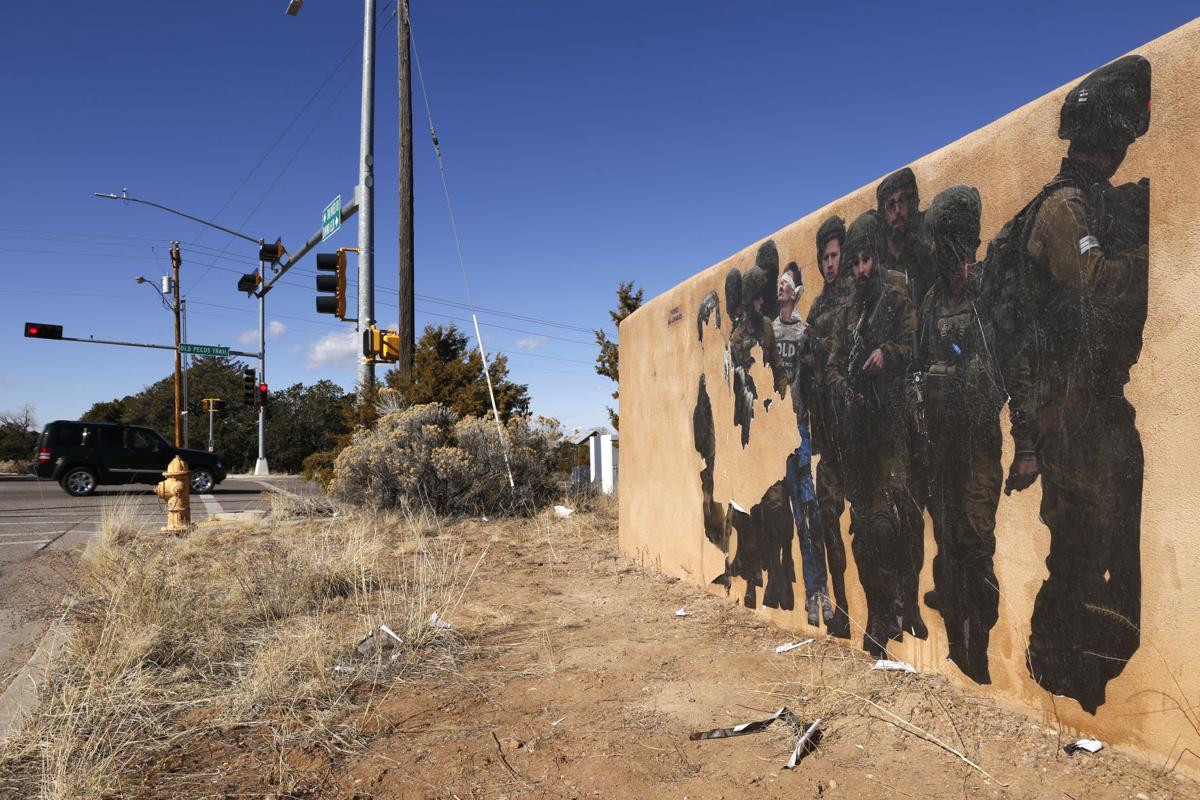 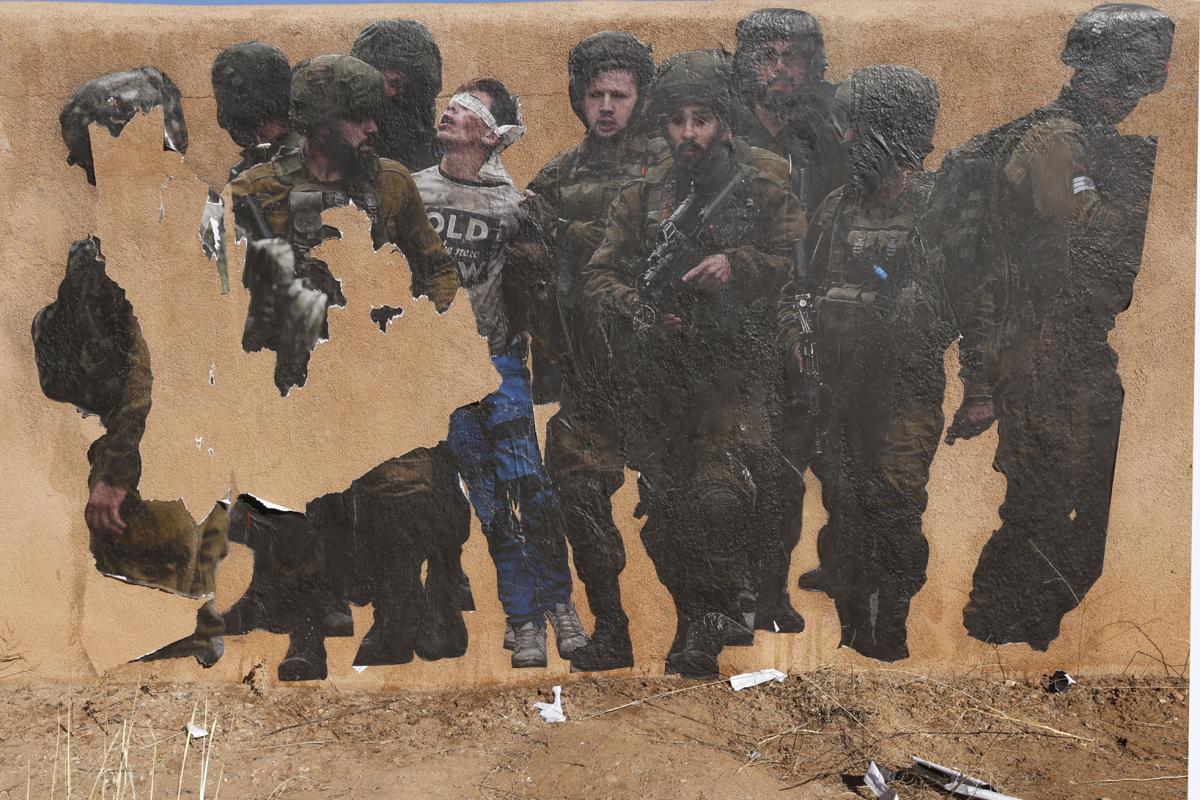 Graffiti depicting Israeli forces and Palestinian civilians at the corner of Old Pecos Trail and Camino Lejo on Monday. The art work appears to have been partially defaced.

The city of Santa Fe will give the owner of an adobe wall sporting controversial pro-Palestinian murals two weeks to remove the art pieces.

That’s because the type of medium — papier-mâché — the artist used to depict controversial images of Israeli soldiers confronting Palestinian women and youth is not permitted under the city’s Historic Preservation Division rules.

City spokeswoman Lilia Chacon said Monday that homeowner Guthrie Miller ”will not be receiving administrative approval to keep the murals up because of the medium is not allowed in the historic district.”

She said city officials will give Miller two weeks to remove the murals, which were created by a Navajo artist named Remy on Jan. 4 on the wall surrounding Miller’s property at the corner of Old Pecos Trail and Camino Lejo.

Miller said early Monday afternoon he was hopeful city officials would let him leave the art works up, though he did not plan to keep them for a long period of time.

“It’s not gonna last that long anyway,” he said, noting such material tends to fade and peel over time.

Chacon said the city will send Miller a letter Tuesday explaining city codes overseeing outdoor walls say they “must be built of brick, adobe, rock, masonry, wood, coyote fencing, wrought iron, slump block, or similar materials; and that stuccoed walls must be brown, tan, or local earth tones. These provisions do not provide for the application of artwork on paper with starch-paste glue, as is the case with your proposal.”

Remy said he created the digital images, which he plastered on the wall, to draw a comparison between the Israeli-Palestinian conflict and the plight of Native Americans during periods of colonialism and conquest.

Miller said he discovered the art work the day after Remy created them. Although the homeowner said he knew nothing about the project, he found the work “powerful.”

Some local Jewish leaders immediately criticized the work as anti-Semitic.

Since then, Miller said he visited with one local Jewish faith leader, Rabbi Berel Levertov, to discuss the images and the possibility of opening up the wall to a more balanced, mural-driven view of the Israeli-Palestinian conflict.

“The agreement was that a small group of us will sit down and talk so different points of views can be heard and listened to,” Miller said.

Levertov said Monday he is happy the mural will be taken down, adding he told Miller that if he wants to use art to showcase life in the Middle East, “he should depict more than one snippet.”

Miller, a retired Los Alamos National Laboratory employee who has allowed other pro-Palestinian art to be placed on his property in the past, said he hasn’t received critical letters, emails, phone calls or angry visitors about the new mural.

“I’m surprised,” he said. “Normally any mention of Israel [on the wall] would be gone by now. But no problems. I’m actually pleased with our town here.”

Nevertheless, one of the images on the wall featuring armed Israeli soldiers surrounding a bound-and-gagged Palestinian youth appeared to be partially defaced Monday. Miller said he is not sure when that may have taken place, though the mural piece in question was still intact at least as late as last Friday.

“They said that the city is in the process of formulating a new policy toward mural art, which will be completed sometime this year,” Miller said. “They asked me to send them an email requesting approval for the existing art, including photos, and said that they would grant administrative approval. ... I did that on Thursday.”

Upon hearing late Monday that the city had turned down his request, he declined further comment.

As long as we are asking Guthrie Miller to remove the mural. How about we ask him to remove his 12/7/16 Facebook post. The YouTube link says "This video has been removed for violating YouTube's policy on hate speech." How many of your friends have post in Facebook where the link has been removed because it violates YouTube's policy on hate speech?

There are two issues here.

The first is the Occupation by the IDF. To protest this is NOT antii-semitic. But it IS to support International Law and the ethics of all three monotheistic religions.

The second issue is whether this mural meets the city's ever-evolving regulations. These regulations DO evolve and depend on WHICH city official one asks. In my experience in dealing with several agencies in the city, "regulations" are as fickle as the spokesperson!

The images depicted ice on the wall are not meant to please or glorify the blatant human rights abuses inflicted on Palestinian by the Israeli Army, the IDF, which are carried out with US financial, diplomatic and military support. The message is stop funding these atrocities so they don't happen. But while they do, Americans should be aware of what their tax dollars create. Support HR 2407, "No Way to /treat a child." Jeffrey Haas, Santa Means for Justice in Palestine.

The City has poorly served pubic speech. The murals will fade because the media is not permanent. The specious argument about “what if’s...” tries to avoid the real issue, Israel’s occupation has been found a violation of human rights. This is a discussion worth having. It is not anti-semetic, it is a discussion about power and use of military hardware to control a population. Not that different from apartheid or Jim Crow US. Friends don’t ignore friends bad behavior especially when it is destructive to the friends acting badly.

In 2013 Hamas Prime Minister Ismail Haniyeh reiterated that the Palestinian Arabs as a whole will never recognize Israel: "We had two wars...but Palestinians did not and will not recognize Israel". Here is a link to 2018 rocket attacks from Gaza to Israel https://en.wikipedia.org/wiki/List_of_Palestinian_rocket_attacks_on_Israel_in_2018

:) 'OH-OH the PC (progammed conditioned) nannies of the city differant? are out and about whining once again, be good or the nannies will get you....in other news the city could really use more of a viriety of artistic murals about and not just the sanctioned gentrified ones.....Times change and life/living is not static, Santa Fe needs a good jumpstart to get its creative blood flowing once again....'

Once again the city has not been transparent. It approved an art mural that was the size of a studio apt for a gallery on Paseo. There are historic criteria for murals. In this case, I think the material is a problem because it is degrades and can be defaced too quickly and easily.

That said, it sounds like the City is making up a new rule as it goes along. In other words, nothing in the Historic District code prevents expressive art or allows it. Its mute on it, the way I read this article. The art is not part of the structure of the wall but something added to it.

Be nice to link to the actual language in the city code/ordinance in the article.

Thank you City for using whatever means possible to take down antisemitic hate speech.

I still think this is a First Amendment free expression issue but maybe I'm on thin ice.

Thank you, Remy and Mr. Miller, for your courage and willingness to clearly depict a situation that needs more attention. Sorry to see this go.

A potential slippery slope. If unchecked, we could see the buildings and walls in the historic district plastered with political "art"....there are plenty of other ways for people to express their views.

I suppose if I created a mural with Adolph Hitler exterminating Jews at Auschwitz, this would also be praised and acceptable.

Sadly the Santa Fe New Mexican would support it. They have no problem printing blatant any-Semitic letters.

If criticizing Israel for it's violations of Palestinian human rights is anti Semitic, then what about all the Jewish people who support Jewish Voices for Peace, or Rabbis for Human Rights in Palestine? These are people who LOVE being Jewish but who do not recognize Jewish ethics in Israel's blatant disregard for treaties or dignity.The Palestinians are analogous to the original people whose civilization we white people have destroyed and shoves into reservations in order to make room for 'settlers." My grandfather is a Rabbi for Human Rights in Palestine. He is NOT anti Semitic.