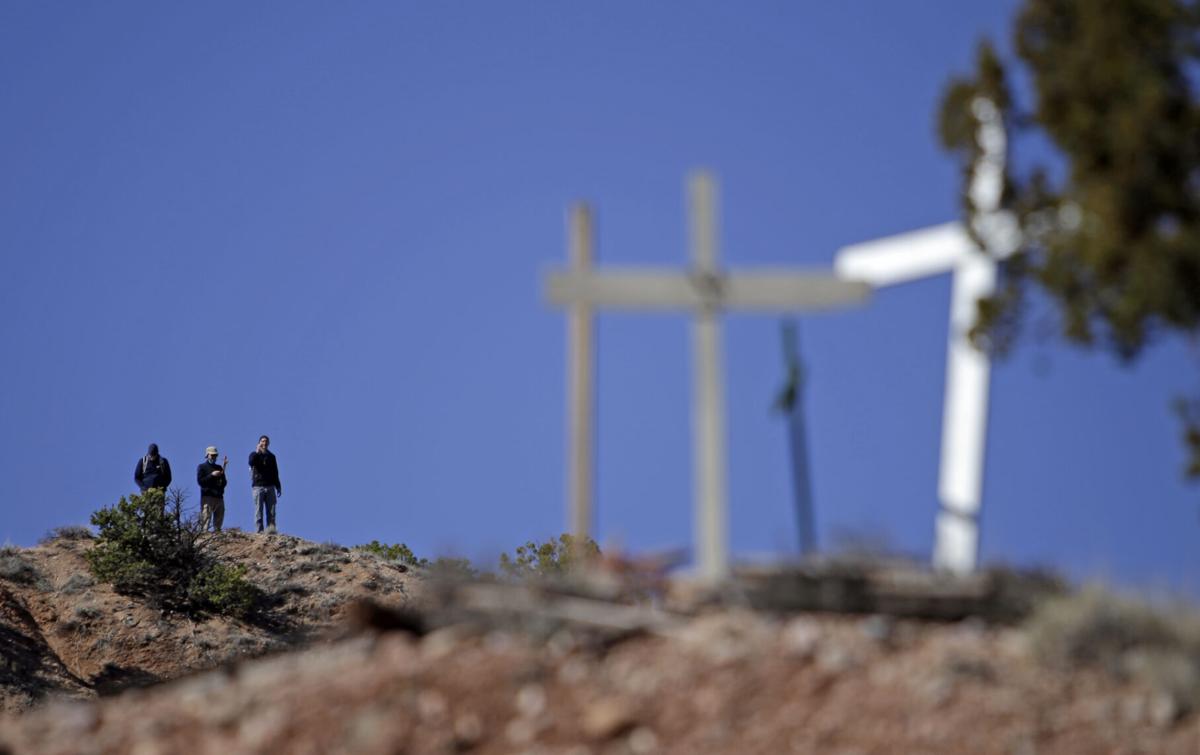 A group of pilgrims stands on a hill overlooking Juan Medina Road during the Good Friday pilgrimage to El Santuario de Chimayó. Thousands typically make the pilgrimage, but there were no crowds this year with the santuario closed due to the pandemic. 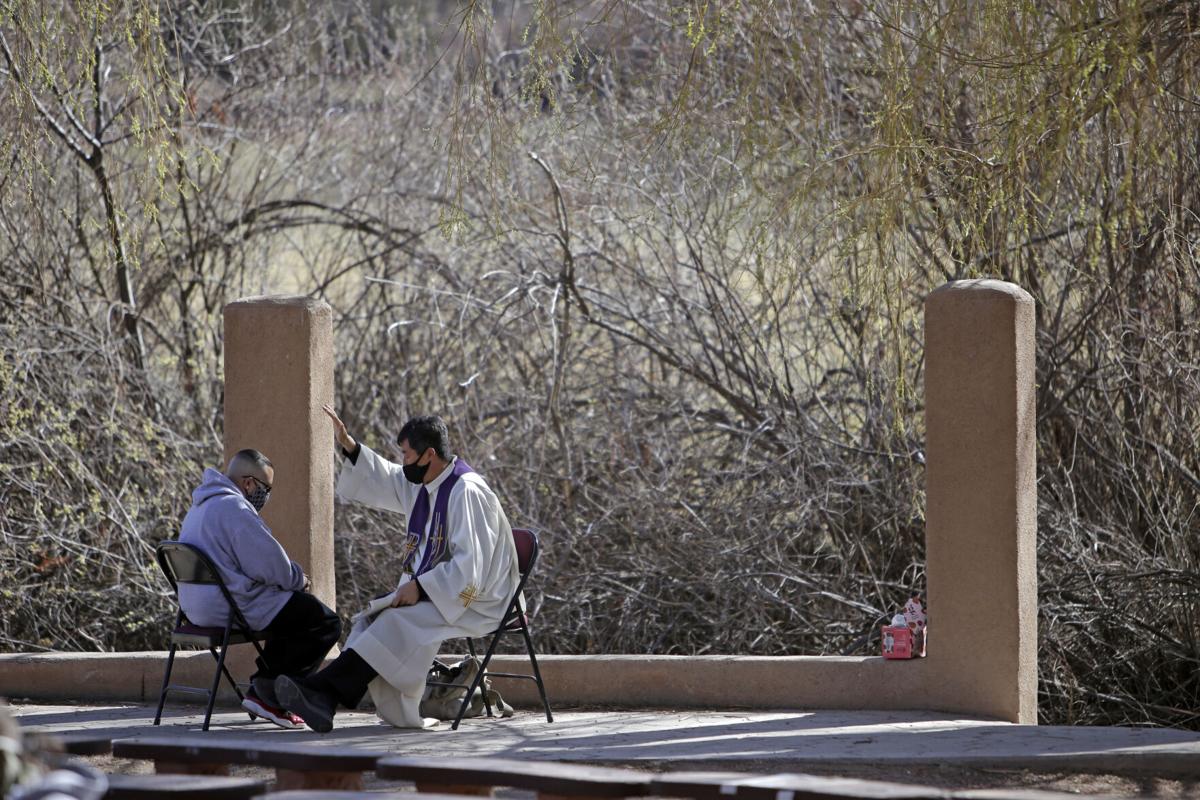 Frederick Mascareñas of Albuquerque receives a blessing Friday from the Rev. Sebastian Lee at El Santuario de Chimayó. The grounds of the santuario remained open to visitors. 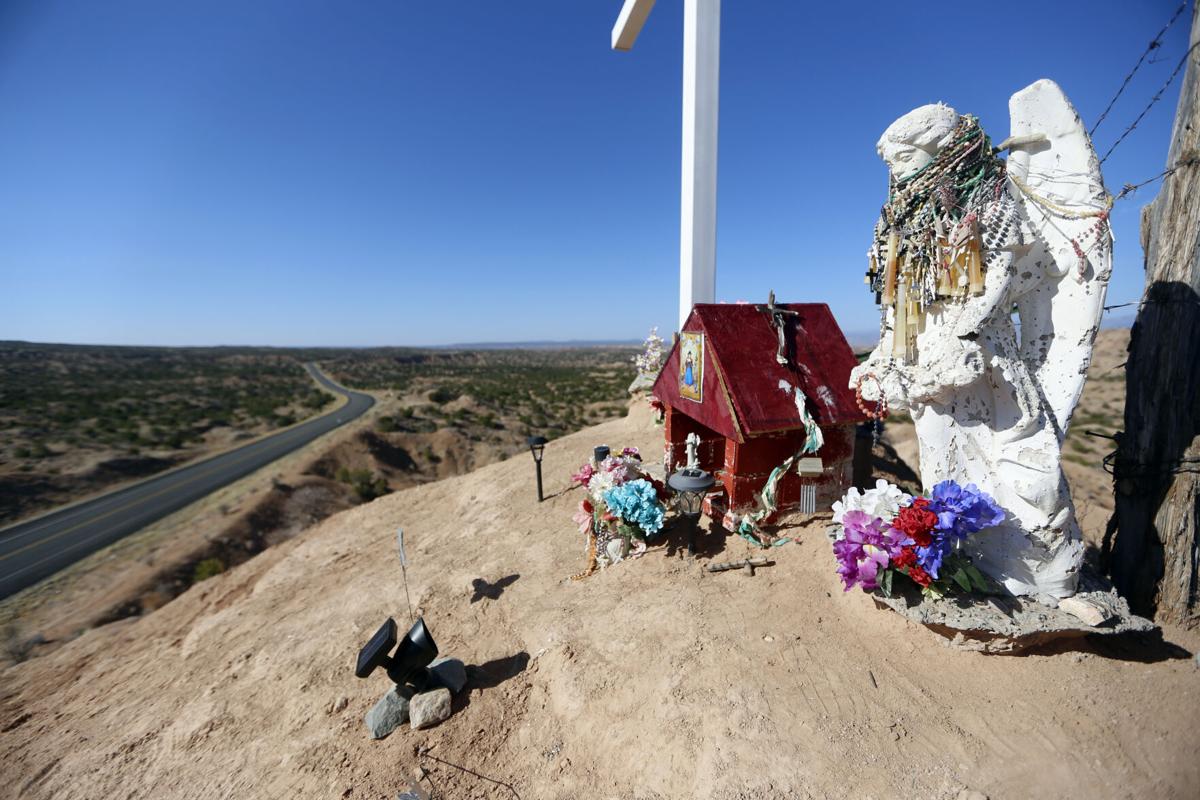 A shrine overlooks a mostly empty Juan Medina Road on the way to El Santuario de Chimayó on Good Friday. 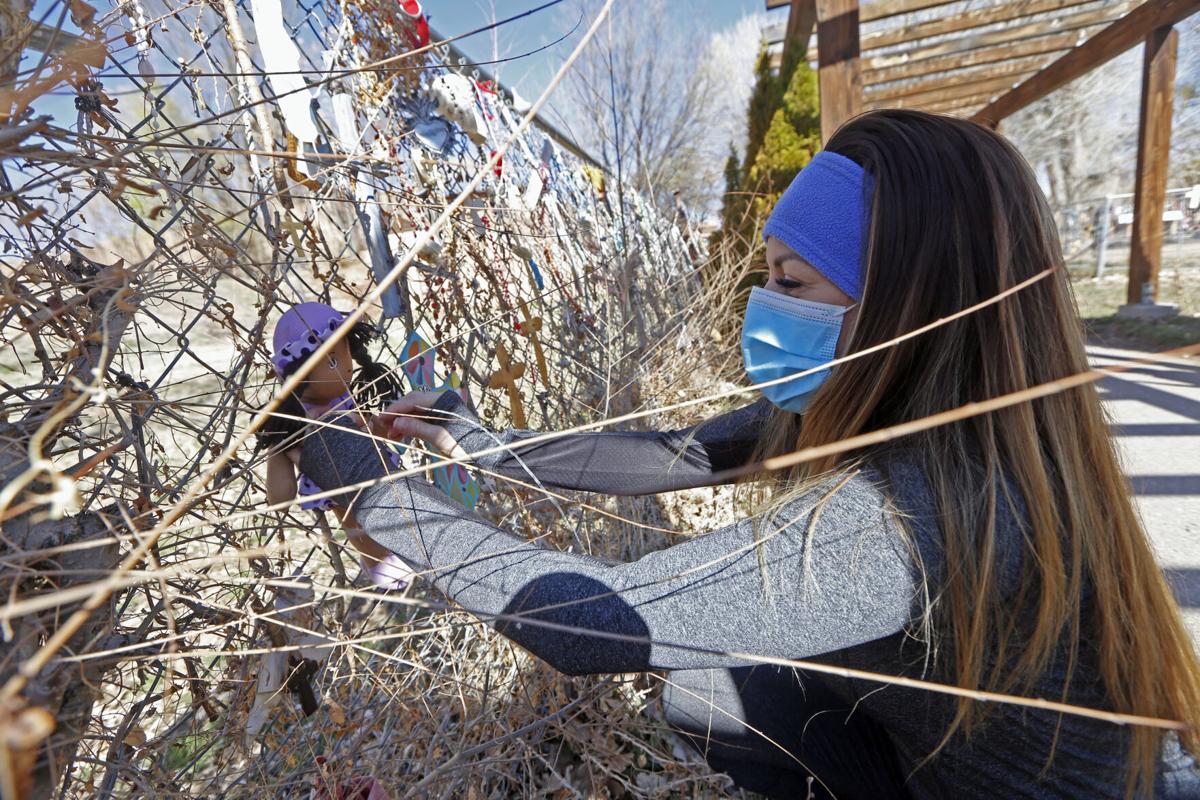 Valerie Martinez secures a doll to a fence at El Santuario de Chimayó on Good Friday. Martinez, a New Mexico native, now works as a nurse in a neonatal intensive care unit in Orlando, Florida. She had a 1 1/2-year-old patient die last week and dedicated this year's walk to the santuario to her. The doll belonged to the child.

Small numbers of faithful Catholics walked, biked or drove to El Santuario de Chimayó for Good Friday as they continued a holy tradition despite the lingering pandemic.

Roads leading to the santuario were not filled with the usual thousands who participate in the pilgrimage, but the devout soldiered on despite no formal provisions from police or the New Mexico Department of Transportation.

The sacred space was not completely closed to visitors. While parking, bathrooms and the santuario itself were shut, pilgrims could still walk the grounds.

The Rev. Sebastian Lee provided religious comfort the pilgrims were seeking by offering blessings and confessionals outside.

Even local businesses that were shut down last year were able to greet the small pilgrimage crowd. El Potrero Trading Post, just steps away from the site, said it was seeing familiar faces again.

“Last year they canceled it as well, but you couldn’t even get in here because it was all barricaded, so there was no activity whatsoever,” said Laura Telander, an employee at the store for the past five years. “We’ve established a customer base through the people who come here every year.”

Telander said the loyal customer base helped keep the business afloat despite the smaller turnout, as those who were not able to make the pilgrimage still placed mail orders at the store for chile, produce, artwork and more.

Two travelers who made the journey were father-and-daughter duo Frank Griego and Emily Prevatt. The pair biked from the nearby town of La Puebla, where Griego lives. Though usually accompanied by other family members, the two have made the journey almost every year for the past 20 years.

“Every year we have someone we pray for,” Prevatt said. “We hope to keep the tradition going in our family.”

Last year, they prayed for solace after the death of a baby niece, and they returned this year to pray after the death of the brother and son their family lost. They said coming to the site helps them and comforts them amid the tragedies.

While Griego and Prevatt chose to bike, other wayfarers continued on foot.

A casual Bible study group from Albuquerque made the journey beginning at the Cities of Gold Casino parking lot, a 10-mile trek from the site. Rich Rosley, 56, and companions Eli Castellano, 30; Dominic Martinez, 52; and Frank Sanchez, 55, have been friends for seven years, bonding over biblical scripture. Only Sanchez had made the journey before, participating in the trek for the last 20 years.

Despite the closure, the group said it was about the journey, not the destination.

The Archdiocese of Santa Fe, the state Department of Transportation and local police cautioned the community against making the trip, citing the coronavirus pandemic.

To make up for the loss of provisions, some walkers were offered water bottles by passing cars, and state police patrols remained in the area.

The pandemic disrupted years of annual tradition for many families. Sisters Veronica Saenz and Dolores Martinez, who had made the journey every year for the past 17 years, except in 2020, said the pandemic was not going to stop them this time.

“We can’t say, ‘Let’s not go out,’ just because of the virus,” Saenz said in Spanish. “We made a promise to God, and even though it’s closed, we still want to walk.”

For the stars, and the trees, for the sunshine and the seas/for the words and the melodies, for the love of a family/for thy most righteous, wondrous 2021 Victory, for the many days thou hast forgiven me/for all Eternity, Glory be, glory be, only unto Thee, My Risen Christ King!