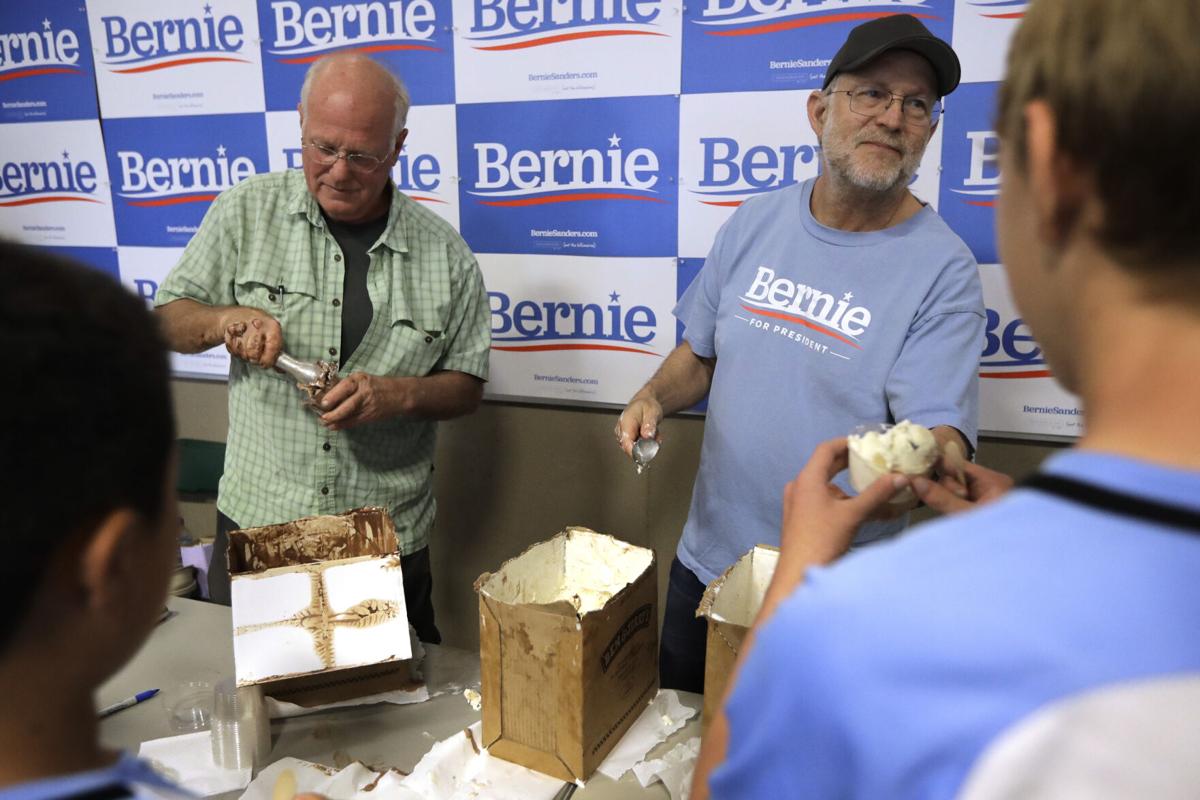 Sometimes one name is all it takes to command attention. Cher. Madonna. LeBron.

This story of political activism has two big names — Ben and Jerry.

Ben Cohen and Jerry Greenfield found fame by making ice cream. Now their interest is in making law, nationally and in New Mexico.

Ben and Jerry appeared Tuesday on an internet news conference with members of a half-dozen groups that support House Bill 4, which proponents also call the New Mexico Civil Rights Act.

It would bar the defense of qualified immunity in state courts when people sue a government agency on claims of abuse by police officers or other public employees.

New Mexico's legislation is compatible with a national campaign featuring Ben and Jerry along with hundreds more well-known personalities. The goal of that effort is to end qualified immunity as a defense for police officers.

"We respect and appreciate the above and beyond the call of duty work that most policemen are engaged in," Ben said. "But we are committed to end this get-out-of-jail-free card for bad cops."

Without hesitation, he moved to the issue of race in allegations of police misconduct.

"This is not a Black problem. This is a white problem," Ben said.

"The law enforcement officers that we arm and pay to protect and serve are brutalizing and killing unarmed Black and brown people right in front of our eyes. And we're letting them get away with it. Everyone needs to be held accountable."

"As businesspeople, we know that first and foremost accountability is the key to achieving desired results," he said. "Qualified immunity is a fundamentally unfair and unjust policy.

"We repeatedly see unarmed Black people abused, maimed and killed with no accountability for police. And without accountability there will be no trust and no healing within the communities that police serve."

State Rep. Georgene Louis, D-Albuquerque, is a sponsor of HB 4. She said the proposal might not increase litigation or drive up government expenses. In her view, the bill could have the opposite effect by creating a fairer system for the public.

"If there are no violations of a person's civil rights, the cost is zero," Louis said.

Most of those appearing with Ben and Jerry were aligned with liberal organizations, but there were exceptions.

"I think it's critically important that everyone understand that government and in particular law enforcement's No. 1 responsibility is to protect the rights of its citizens," Goldstein said.

She is executive board chairwoman of a public policy group, the Law Enforcement Action Partnership.

Even with support from Americans for Prosperity and certain police officers, HB 4 has done badly with Republicans in the state Legislature.

The measure cleared the House of Representatives 39-29, but not a single Republican voted for the bill.

Now the proposal is in the Senate, where it has a decent chance at passage. The powerful chairman of the Judiciary Committee, Democratic Sen. Joseph Cervantes of Las Cruces, is carrying it.

I asked Ben and Jerry, creators of ice cream flavors such as Chunky Monkey and Cherry Garcia, if they would use their creative flair to lobby state senators.

"Jerry and I are not planning on speaking with legislators in New Mexico. However, if anybody wants us to, we're happy to do it," Ben said.

Barron Jones, senior policy strategist of the ACLU in New Mexico, joked that he might make the request.

Ben and Jerry have had tougher duty than persuading politicians.

With $12,000 in 1978, they launched their business with one ice cream store in the university city of Burlington, Vt.

The million-to-one shot came in. It made almost anything seem possible.

This bill is a very bad idea, because it doesn't go nearly far enough. It's what was "possible" to get past the cops. Civil Rights suits are already possible, in Federal Court, where there is no cap. These will continue.

Needed, and nowhere in sight, is bringing Criminal charges against our criminal cops, and this our AG and DAs have no stomach for.

https://nmindepth.com/2016/03/23/puff-of-smoke-justice-system-designed-to-clear-cop-who-killed-jeanette-anaya/ shows the problem all too well. A murder by NMSP Officer Wilson, which was covered up, by the NMSP and DA Pacheco. The AG and DA would not prosecute, as they don't want to take on NMSP/DPS.

The bill expressly eliminates tort suits against the officers, which might actually deter them. The $2 million cap is low enough that cases will "settle" without going to trial, where we could see the facts. The local governments ARE NOT doing any oversight of their cops, and with this low cap, they still won't.

The bill is simply political cover. Appearing to do something while, in many ways, make the problem worse.

Mr. Chris Wilson, so here you are taking the role of a "subject matter expert" since "the AG and DA would not prosecute, as they don't want to take on NMSP/DPS" relating to the Jeanette Anaya (By all respects) officer-related shooting case in 2016. Since you are alleging that "a murder by NMSP Officer Wilson, which was covered up by the NMSP and DA Pacheco" is FACT, then, why are you not filing a motion to the courts to reconsider this so-called "criminal charges against our criminal cops, and this our AG and DAS have no stomach for?" If anything that the State of New Mexico (Plaintiff) should file is a tort claim in civil court for attorney fees, court costs, and punitive damages in your name (Defendant) for libel, slander, and defamation against Mr. Wilson character, reputation, and name.

Seriously, this specific piece of legislation does not have any legal enforcement powers if it is approved and signed off by the Governor regardless on what Egolf or Louis says or do. Until the Supreme Court of the United States has a final say on it, it has no merits or validation. The sad part of Milan's story is that it fails to show any creditability of the persons interviewed for showing support of the HB4 altogether. Definitely, the source of information provided by them (e.g., Law Enforcement Action Partnership, etc.) that Milan invited for an interview of this story does not speak for any one but self-interest driven. Now, if Milan would of interviewed the National Fraternal of Police (FOP), the National Sheriff's Association, Police Executive Research Forum, NIJ, IALEIA, NIC, JRSA, the Federal Law Enforcement Officers Association, and the National Latino Peace Officer's Association, etc., then, maybe, an accurate picture from a national level on the subject matter of "qualified immunity" would of surfaced. But as usual, Milan's preferred selection of persons who have no subject matter expertise on the topic is a standard practice of his bad journalism.

It's easily enforced when a citizen sues the police officer for violating their civil rights, it's pretty simple. Nobody interviews police unions because they're all foaming at the mouth and hold the same, illogical, boys club views.

Don't understand why Milan is always carrying the water for Egolf. Every single county and cities administration is against this bill, most of them being democrat administrations. Should that send up red flags people, that your closest representation is against this bill. And the state official (Egolf) is telling you this is good for you, who stands to make millions personally. This is nothing more than Milan's one sided journalism telling people how to think. And should we really be listening to the super 1% percenters like Ben and Jerry, no thanks for me.

Most administrations, right or left, are against this bill because they will suddenly be held accountable for the bad behavior of city or county officials and rather than knowing they get a "get out of court free" pass, they will have to pay the piper.

So, the bottom line is more work for county and city administrations to make sure they are not abusing citizens. Better police academy and recurrent cop training. Etc. No one likes more work.

Well put. But it is telling that the bill appears popular in the legislature. They get held accountable too but obviously feel like if someone does something stupid on the job, they deserve to be held accountable. Personally, I think legislators are fed up from hearing from constituents that police in NM don't respond adequately, lose evidence, and, yes, violate rights. And those politicians are sick of sticking up for the unions that attack like rabid dogs. For the record, I think all rank and file police are underpaid and undertrained for a tough job. In that way the unions fail them. They try to beat up politicians for common sense reforms but leave their own enlisteds out to dry with bad pay and benefits. But they get private drinking halls so I guess that makes up for it?

More precisely, qualified immunity screws PoC and the poor. If you follow Radley Balco's work, there are plenty of examples of white folks finding themselves victimized as well. One case I vaguely recall is a couple who had their house literally destroyed in a botched drug raid. They tried to sue, and were S O L.

I know when I am particularly concerned about a political issue it is a good idea to turn to people who make ice cream.

Or else professional athletes or movie stars

“If there are no violations of a person’s civil rights, the cost is zero,” Louis said. and if unicorns come back and pigs fly. You already have the right to sue for negligence or wrong doing by Government officials, the difference is $2,000,000.00 per law suit which will bring a flood of suits over the next years. I would almost bet Egolfs firm will have a suit against the very State that he Represents as a legislator within the first year of passing the bill look at his track record. And our best cops and Government officials will find other occupations and be replaced by the unemployable and crime will double, these are sure bets. The other thing is if this bill has so much merit why do the legislators have to bring in outsiders like Ben and Jerry to sell it as if New Mexican's were incapable of making up their own minds.