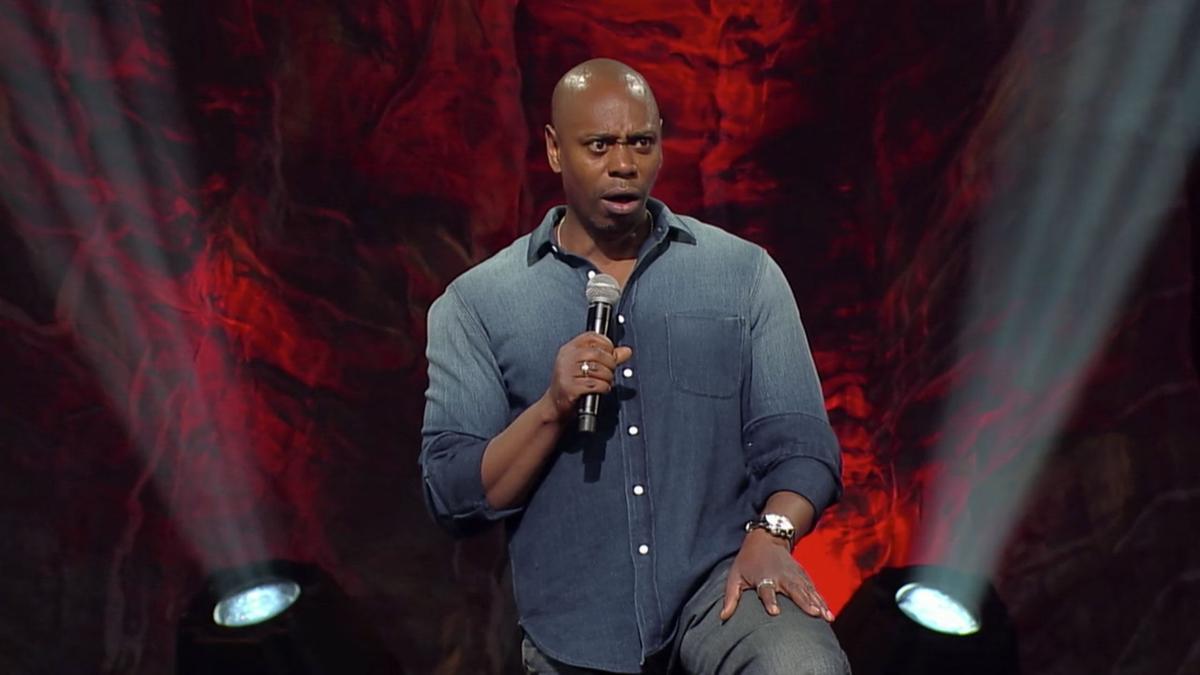 In his new comedy special on Netflix, comedian Dave Chappelle discusses racially-charged incidents he's lived through including one in which a Santa Fe man tossed a banana peel at him in 2015 during a performance at the Lensic Performing Arts Center. Screenshot from Netflix 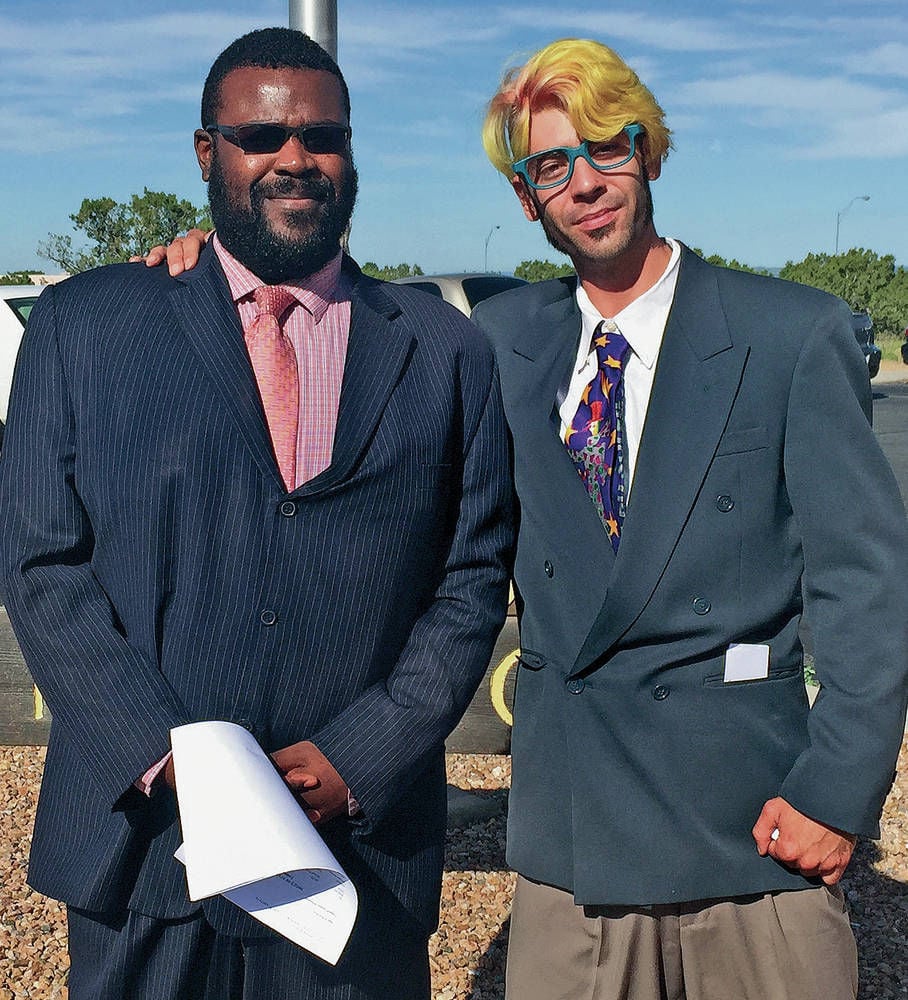 From left, attorney Rod Thompson with his client Christian Englander, who threw a banana peel at comedian Dave Chappelle in March 2015. Charges against Englander were dropped because Chappelle didn’t want to participate in the prosecution. Robert Nott/New Mexican file photo

In his new comedy special on Netflix, comedian Dave Chappelle discusses racially-charged incidents he’s lived through, including one in which a Santa Fe man tossed a banana peel at him in 2015 during a performance at the Lensic Performing Arts Center. Screenshot from Netflix

In his new comedy special on Netflix, comedian Dave Chappelle discusses racially-charged incidents he's lived through including one in which a Santa Fe man tossed a banana peel at him in 2015 during a performance at the Lensic Performing Arts Center. Screenshot from Netflix

From left, attorney Rod Thompson with his client Christian Englander, who threw a banana peel at comedian Dave Chappelle in March 2015. Charges against Englander were dropped because Chappelle didn’t want to participate in the prosecution. Robert Nott/New Mexican file photo

A man throws a banana peel at a black comedian.

Dave Chappelle waits a beat. “Of course, it was a white person,” he tells the Texas crowd, which erupts at the punchline.

Kicking off one of two new hourlong Netflix comedy specials, the first he has released in 12 years, Chappelle recalls his infamous March 2015 visit to Santa Fe and the racially charged interruption of his performance here — “banana-gate,” Chappelle calls it — that drew international attention and scorn.

And Chappelle, 43, in his first widely broadcast onstage comments about his show at the Lensic Performing Arts Center, pulls no punches.

He mentions that the banana peel tosser, a local man, was arrested — and offers a crude hypothesis on the heckler’s reception in the holding cell. He further rues the media attention the Santa Fe tosser received.

Chappelle, known for incisive social commentary, seems resigned to the absurdity of the episode, delivering his handful of sharp jokes on the subject with a wry, weary smile.

“Twenty years from now, he’s gonna be tucking his kids into bed, the kid’s gonna be like, ‘Daddy tell me about the day that you threw that banana peel at that [man] in Santa Fe,’ ” Chappelle jokes. In a Southern accent, he goes on, “ ‘Boy I tell you what, that black [expletive] had it coming.’ ”

Christian Englander, 32, a self-described eccentric and performance artist, set off the firestorm at the March 30, 2015, show when he lobbed the peel onstage, hitting Chappelle in the leg. Chappelle became livid, demanding to know who had done it.

Englander, who attempted to flee but was caught and arrested, denied any racist motivation. He described it as a joke, and he told police Chappelle had made racist comments to his friend, who was sketching in a book in the audience during Chappelle’s act.

“I’m a jester,” Englander told The New Mexican at the time. “And I did a jester act in the king’s court.”

Word of the incident quickly spread through news reports across the U.S. and abroad.

Englander faced charges of battery and disorderly conduct, which ultimately were dropped because Chappelle did not respond to prosecutors’ attempts to contact him.

In an interview with a television station shortly after the incident, during which he ate a banana, Englander said he threw the peel as an act of constructive criticism. He didn’t like Chappelle’s comment about his friend, he said.

Asked what he would say to Chappelle, Englander told KRQE-TV he would apologize, saying, “I am sorry that I hurt your feelings, you know? That’s real, your feelings are real, and I want to acknowledge that, you know?”

Englander on Wednesday said in a Facebook message he had been “ostracized from town” after the Lensic incident. “Unfortunately for me, Chappelle’s racially charged reaction spun the headlines before I was even given the opportunity to tell my side of the story,” he wrote. He said he now lives in Hawaii.

He also said he now works in the entertainment industry himself. “The Chapelle incident gave me the inspiration to get involved in stand-up comedy,” Englander wrote. “I have been writing an original act I hope to bring on tour this summer.”

“The banana peel toss had no racial pretext or intentions of any kind,” he added. “… It seemed a perfect time to heckle and I so happened to have a banana peel in my pocket.”

Chappelle’s Santa Fe show was largely derailed by the peel; his attitude soured, and he repeatedly expressed his disbelief and a desire to harm Englander. But his sense of humor did sporadically resurface.

“Why didn’t he throw a good banana at me?” Chappelle went on. “Just the brown peel? Where’s the rest of it? I am actually offended by the poor quality of the banana. It was brown, man.”

Less than a week after the Chappelle show, Englander threw a banana at another black man, this time outside a downtown Santa Fe bar during an argument and scuffle over the incident at the Lensic.

Englander, in an interview with The New Mexican at the time, said the second banana peel toss was ironic.

Alexis Brown, a Santa Fe resident who co-organized the panel, said Wednesday the banana peel incidents exposed “deeply racist currents in our community,” as well as the privilege of those who dismissed them as harmless. Too many people, Englander included, fell into that category, she said.

“You can live in a world where you think that’s just a funny joke when, in fact, it’s actually highly discriminatory and derogatory,” Brown said.

“Race issues in our community are quite different than in some other places,” she said of Santa Fe. “No one really ignores that there are race issues here, but I think we tend to kind of compartmentalize and live in a bubble of liberalism and open-mindedness, so that we as a community forget.”

When he took the stage in the Texas capital, the banana peel was plainly front-and-center in Chappelle’s mind.

“You know I was in Santa Fe the other night,” he says after greeting the crowd. “A [expletive] threw a banana peel at me. Yeah, that didn’t feel so good.”

A message left with Chappelle’s publicist Wednesday seeking comment on the Netflix set and whether Chappelle was interested in returning to Santa Fe was not returned by press time.

Chappelle’s relatively recent return to the stand-up circuit comes after a lengthy sabbatical he has said he took because he became uncomfortable with his level of fame. He hosted the first episode of Saturday Night Live after President Donald Trump’s election in November, perhaps his most prominent public appearance since walking away from his popular Comedy Central sketch series Chappelle’s Show in 2006.

Despite retreating from the spotlight, Chappelle has appeared sporadically in news reports about stand-up sets that have gone south. But the 2015 show in Santa Fe was perhaps the most notorious. Chappelle, in the Heart of Texas special, recollects his subsequent interactions with the news media.

“The press called me up, ‘Do you have a statement?’ A statement! For a [expletive] banana peel? No! I don’t have anything to say.”

Charges dropped against man who threw banana peel at Chappelle

Immediately after the incident, Chappelle said he wanted to press charges against peel-thrower Christian Englander of Santa Fe because the comedian saw the incident as racist.

What a week it has been for star sightings. Forgive El Mitotero for being away for so long. …

A police statement said Christian Englander appeared to be drunk when he threw the banana peel, which hit one of Chappelle’s legs. Englander was arrested and booked into jail on misdemeanor charges of battery and disorderly misconduct.