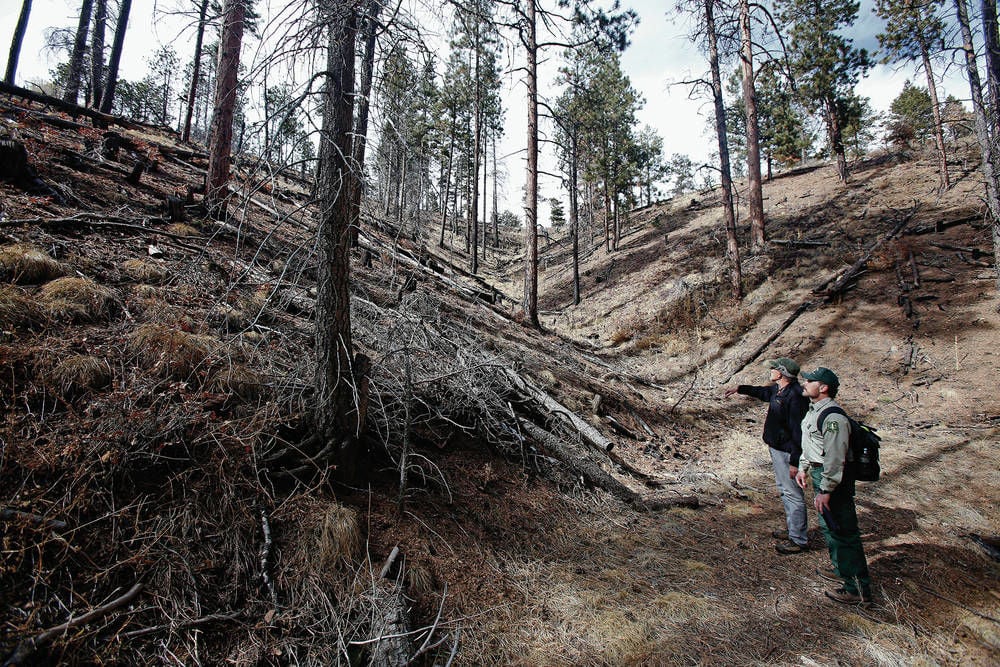 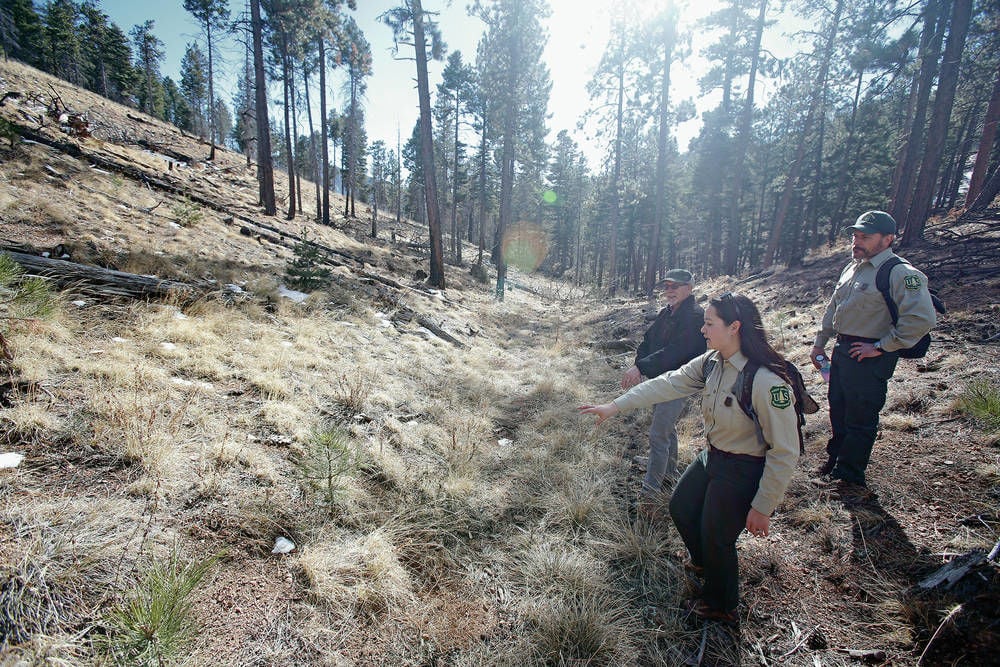 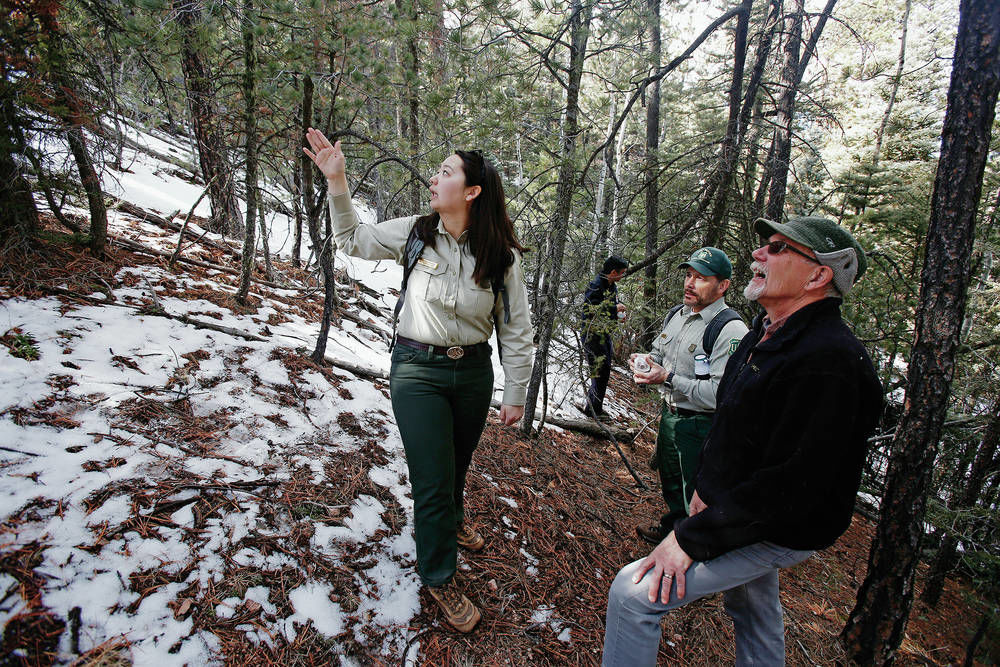 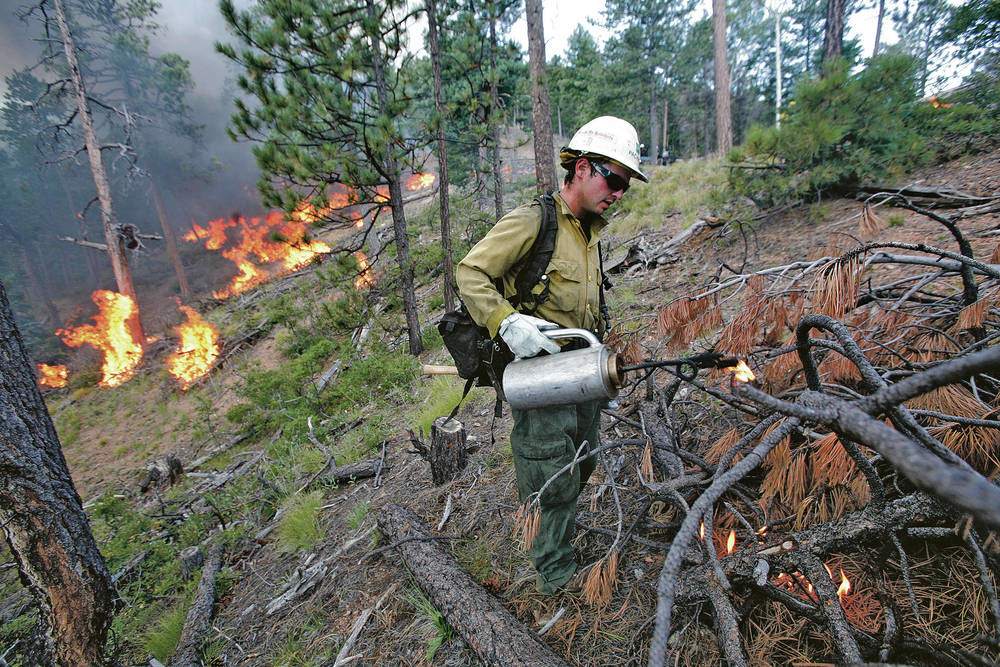 Mateo Pacheco, with the Santa Fe Hotshots, uses a mixture of diesel and gasoline to light piles of wood in 2008 at the Santa Fe Municipal Watershed. Luis Sánchez Saturno/The New Mexican file photo 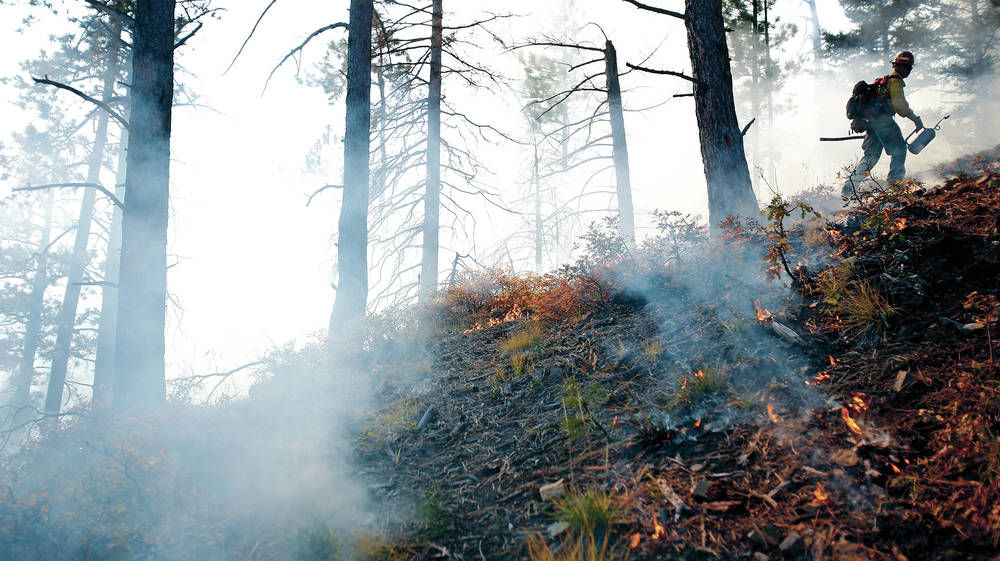 Mateo Pacheco, with the Santa Fe Hotshots, uses a mixture of diesel and gasoline to light piles of wood in 2008 at the Santa Fe Municipal Watershed. Luis Sánchez Saturno/The New Mexican file photo

Santa Fe National Forest officials say they will make a final decision in coming weeks on plans to start thinning out more than 1,800 acres of trees near Hyde Park this summer.

The Hyde Park project is the first phase of a larger thinning program intended to reduce fire danger on 107,000 acres across the Sangre de Cristo mountain range in coming years.

If smaller trees are left in place, officials warn, they will likely fuel huge “crown fires” that destroy the larger, healthier trees around them. Planning documents call for leaving most trees larger than 16 inches in diameter standing.

Some prominent environmental groups say they disagree with the Forest Service’s plan to proceed with the thinning work without undertaking a full environmental study.

The concerned groups say cutting and burning the trees on site could harm endangered species and roadless areas. They promise a legal challenge if the federal agency doesn’t undertake a more detailed environmental analysis of the work at Hyde Park and elsewhere.

Sandy Hurlocker, Española District ranger on the forest, said he expects a final decision on the Hyde Park project in mid-February, after review by the U.S. Fish and Wildlife Service. He said work to thin the first few hundred acres at a cost of perhaps $250,000 could start as soon as this summer.

“Every year that we don’t treat, we have a higher risk that we’ll have a fire that’s going to be higher in intensity than what’s happened historically out there,” Hurlocker said.

The Forest Service proposed the Hyde Park and Pacheco Canyon projects last year. The federal agency has been working with other groups — together called the Greater Santa Fe Fireshed Coalition — on the project. Other members include Tesuque Pueblo, the City of Santa Fe, The Nature Conservancy and New Mexico State Forestry.

Ellis Margolis, a research ecologist with the U.S. Geological Survey in Santa Fe, said it’s clear the Sangre de Cristos are primed for a major fire and said it’s critical to move fast to reduce the threat. The USGS is a member of the fireshed coalition.

Tree rings show there used to be low-severity fires every 10 to 20 years in the mountains around Santa Fe, Margolis said. “Then the last fire we found along the Ski Basin Road was 1890,” he added. “And so prior to that, every 10 to 20 years you would have fires up there burning up a lot of the fuels, and then you stopped the fires.”

The forest is now choked with 120 years of dead trees and other fuel that has never seen fire, Margolis said.

“It’s not if, but when it will burn again, and it may burn this spring or summer with the lack of snow we’re looking at,” he said. “This could be a really bad fire year.”

Such large fires could not only kill all the trees, they also result in heavy runoff from denuded slopes, Margolis said.

“The flooding that occurs after these big fires is incredible and would probably wipe out the Ski Basin Road [and] potentially flood all the downstream communities,” Margolis said. He noted that such post-fire mudslides killed some 20 people last month in California.

“If the Forest Service decides that the science supports management, I think it can’t be done fast enough,” Margolis said of the thinning projects.

Hurlocker said the Forest Service plans to conclude that the Hyde Park and Pacheco Canyon projects each qualifies for what’s called a “categorical exclusion” — meaning they don’t merit the most detailed environmental analysis.

Several groups have protested the agency’s “categorical exclusion” approach. Beyond the Hyde Park and Pacheco Canyon projects, they point out the Santa Fe National Forest has plans for other thinning projects and say their cumulative effects should be considered together.

Officials with the Wilderness Society wrote to the Forest Service early last year stating that both the Hyde Park and Pacheco Canyon projects involve substantial amounts of logging in roadless areas. The group said that fact strongly reinforces its view that, “it would not be appropriate to categorically exclude these projects from environmental analysis and additional public involvement.”

Hurlocker said most of the thinning work would be done by chainsaw crews that walk into targeted areas, cut small trees and pile them up for later burning. He said his agency has surveyed recently and hasn’t found breeding pairs of spotted owls or other endangered species that would be affected by the work. Such a discovery would trigger more detailed analysis.

Ryan Swazo-Hinds, an environmental biologist with Pueblo of Tesuque Department of Environment and Natural Resources, serves as chairman of the fireshed coalition. He emphasized he couldn’t speak for Tesuque Pueblo itself.

“We know the threat is there so we’re working on protecting our assets such as the Vigil Grant and the Aspen Ranch,” Swazo-Hinds said of current fire conditions. He said work to assess biological and archaeological issues on the more than 300 acres of pueblo lands within the Pacheco Canyon project area is ongoing.

Anne Bradley, director of forest conservation for The Nature Conservancy in New Mexico, said her group got involved in the fireshed coalition out of concern not only about public safety but also about the health of the forest.

Bradley said the Sangre de Cristo mountains are clearly important to the economics and quality of life of Santa Fe. “We just thought collectively that this would be an important landscape to start working on and thinking about how we could improve its condition,” she said.

The Nature Conservancy has been assessing the risk not only of catastrophic fires but also of the potential for debris that would flow from burned areas, Bradley said.

“We definitely see the potential for crown fire in a large portion of the fireshed,” she said.

Hitt said his group likely would mount a legal challenge if the Forest Service issues a final decision in coming weeks that concludes the projects merit categorical exclusions.

The Forest Service proposed a similar project in the Hyde Park area more than 10 years ago but withdrew it after environmentalists appealed the lack of detailed analysis, Hitt said.

Hitt said he understands many wealthy people who live above Tesuque and in Hyde Park are concerned about their homes burning down. “I think that’s quite justified,” he said. “And the best way to deal with that is to reduce the fuel immediately adjacent to their homes, like within 200 to 300 feet at the most.”

However, Hitt said he sees many homeowners who live in the forest haven’t taken basic precautions, such as clearing away underbrush near their homes and moving woodpiles from their porches.

Hitt said his group proposes that the Forest Service concentrate on reducing fuels on its lands closest to private structures. But Hitt said he doesn’t see evidence to support the fireshed coalition’s baseline assumption that reducing the vegetation in roadless areas of the forest will lessen the chance of catastrophic fires.

“They’re trying to do something impossible, which is to stop the major, large, hot fire which is probably inevitable under current conditions,” Hitt said. “And they’re not doing the level of analysis that would reveal the best science that should involve the public, to the fullest extent possible, and really should take alternative strategies.”