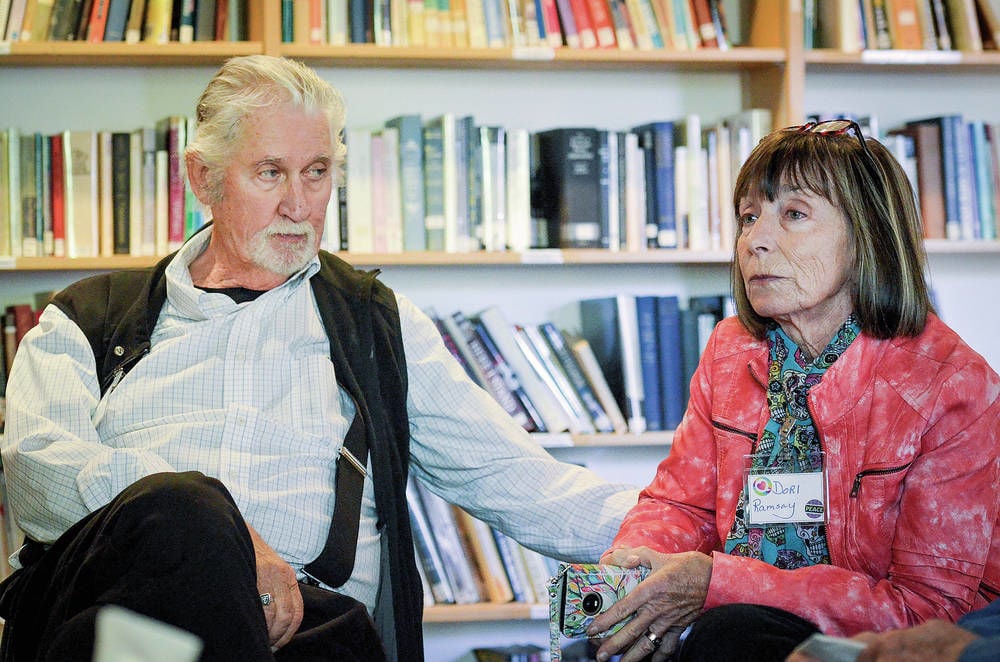 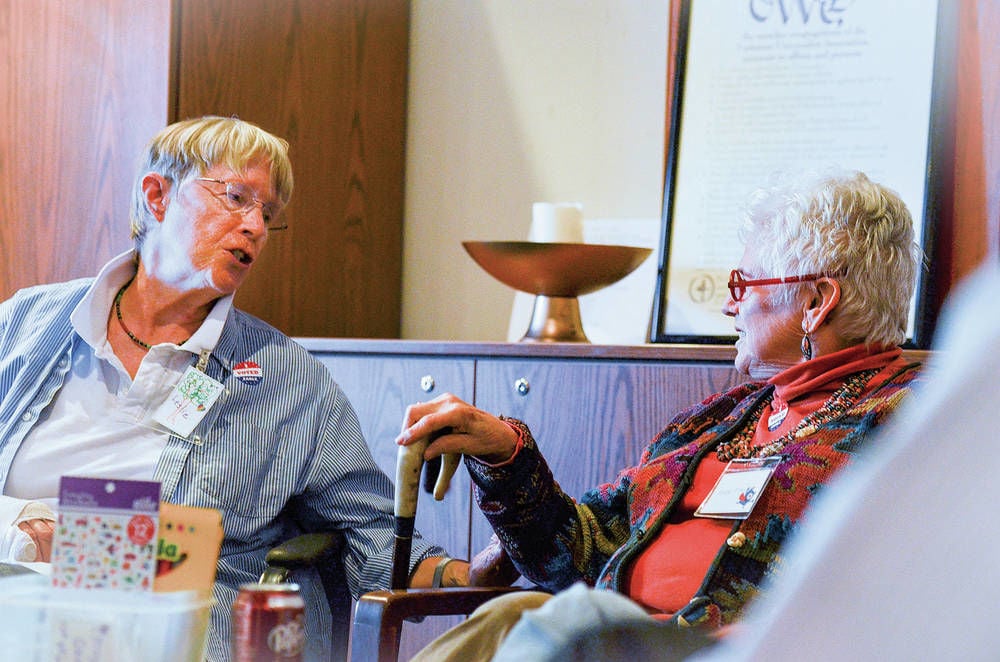 Leslie Rich, left, and her wife, Denise Kusel, share a moment Friday at the ‘Santa Fe Memory Cafe’ at Unitarian Universalist Church of Santa Fe. The gathering enables caregivers such as Rich and those living with Alzheimer’s such as Kusel to socialize and empathize. Elayne Lowe/The New Mexican 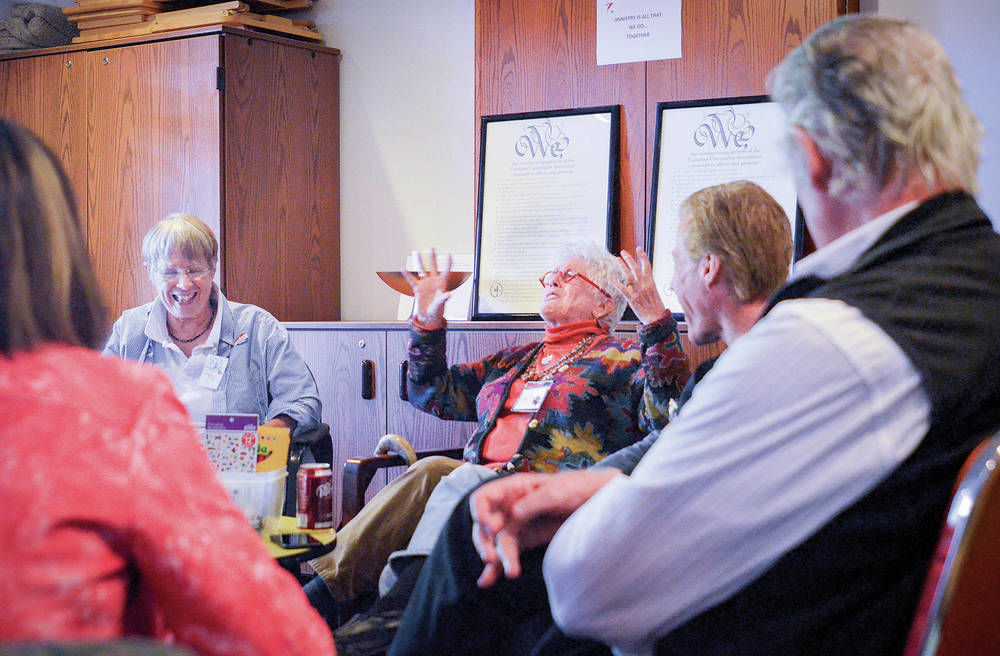 Denise Kusel, center, tells a funny story to the group meeting of the ‘Santa Fe Memory Cafe’ at Unitarian Universalist Church of Santa Fe. The gathering provides socialization and support for caregivers and Alzheimer’s patients. Kusel, when diagnosed more than a year ago, first asked the doctor if she would lose her sense of humor. Elayne Lowe/The New Mexican

Leslie Rich, left, and her wife, Denise Kusel, share a moment Friday at the ‘Santa Fe Memory Cafe’ at Unitarian Universalist Church of Santa Fe. The gathering enables caregivers such as Rich and those living with Alzheimer’s such as Kusel to socialize and empathize. Elayne Lowe/The New Mexican

Denise Kusel, center, tells a funny story to the group meeting of the ‘Santa Fe Memory Cafe’ at Unitarian Universalist Church of Santa Fe. The gathering provides socialization and support for caregivers and Alzheimer’s patients. Kusel, when diagnosed more than a year ago, first asked the doctor if she would lose her sense of humor. Elayne Lowe/The New Mexican

When she was diagnosed with Alzheimer’s disease in September 2017, Denise Kusel first asked her doctor, “Will I lose my sense of humor?”

A former Pasatiempo editor and humor columnist for The New Mexican, Kusel, 75, had a sense that her life was over.

It wasn’t her first blow. In 2005, she had a reaction to an anesthesia administered during a foot surgery that left her with memory loss. She never fully recovered from the drug’s effects and could no longer work in journalism. The last edition of her Only in Santa Fe column, in which she told New Mexican readers about her preparations for the upcoming surgery, was published in June 2005.

A year later, Kusel was diagnosed with another type of dementia. “No one explained what it was,” she said.

Now, more than a year after her Alzheimer’s diagnosis, doctors say Kusel’s disease has hardly progressed. Her sense of humor is still intact.

That’s good news, she said in a recent interview. But, Kusel added, “I still wake up in the morning and wonder, ‘Am I all here? Can I still get up and do things for myself?’ Because I know one of these days, there will be no answer for me. And that’s scary.”

Fear of Alzheimer’s and other dementia-related illnesses is all too common, said David Davis, a caregiver trainer and executive director of the Memory Care Alliance for Northern New Mexico, a year-old nonprofit that offers support to caregivers and patients like Kusel and her wife, 72-year-old Leslie Rich.

“One of our mission points is to try to take the fear out of this,” Davis said. “This whole culture of this disease has got to change.”

The alliance is hosting a daylong Caregiver Education Day on Saturday at Santa Fe Community College. The event, Davis said, is not just for patients, family members who care for them and professional caregivers, but for the community at large.

That’s important, he said, because “we’re at the point where this is affecting everybody.”

Davis, who previously worked for the New Mexico chapter of the Alzheimer’s Association, has firsthand experience with the devastating effects of the disease, which still has no cure or preventive treatment.

According to the Alzheimer’s Association, more than 50 million people worldwide and nearly 6 million in the U.S. are living with the disease and other types of dementia. In New Mexico, there are an estimated 39,000 patients, a number that is projected to increase by about 36 percent, to 53,000 people, by 2025.

Davis describes the donor-funded Memory Care Alliance as a partnership between several community-based organizations that serve caregivers and clients with dementia, as well as the University of New Mexico’s Memory & Aging Center, which opened last winter. He refers at least one client a week to the center, which serves as both a research facility and diagnostic and treatment clinic.

Along with referrals, the alliance offers caregiver classes, support groups, planning services, counseling and even the use of medical equipment for families in Santa Fe and Los Alamos counties. Davis plans to expand it to Rio Arriba and San Miguel counties soon.

Davis stressed the importance of getting an early diagnosis when signs of memory loss or dementia emerge. This gives the patient an opportunity to have a say in their care and to make their last wishes known, he said. “A lot of times people don’t have that opportunity.”

Wait too late to address dementia, and a family is sure to face a catastrophe, he said: “Bank accounts mysteriously cleaned out, a car wreck, a fall. Somebody wanders off and gets lost. And then you’re forced to accept what’s happening.”

Ramsay, 81, was diagnosed with dementia five years ago in Texas. The doctor predicted he had five years of memory left, Ramsay said, “which scared the hell out of me.”

A second opinion wasn’t much better.

It wasn’t until his third diagnosis, at the UNM Memory & Aging Center, that he learned he had white matter brain disease, which leads to deterioration of cognitive skills, but at a fairly slow pace. “That was a great relief,” Ramsay said.

His wife, Dori Ramsay, 68, said the couple were living in a remote area of West Texas, near Big Bend National Park, when Tom Ramsay received his first diagnosis. It prompted them to move to an area where they wouldn’t be so isolated and Tom Ramsey could receive better care.

They are now working toward full-time residency in Santa Fe, a city they said they had always loved for its opera, theater and arts.

It’s also where Dori Ramsay discovered Davis’ caregiver course and support groups, which she said were life-changing for the couple as they learned to live with Tom’s condition.

“I think the interesting thing for us,” she said, “is it was giving us problems in the marriage until it was diagnosed.”

Her husband often would promise to do something but forget to follow through, Dori Ramsay said.

“Initially it feels like withdrawing from the relationship. … He felt really bad and I was really angry.”

After taking part in Davis’ Prepare to Care class and gaining a better understanding of her husband’s illness, Dori Ramsay said, “My anger was gone; his frustration was gone. … It’s gotten nothing but better.”

The knowledge also was crucial in recent months when Dori Ramsay’s mother lost her short-term memory almost overnight, due to a series of episodes of high blood pressure, she said. She worked with her siblings to help create a system of care that allows her mother to remain in her home in Wisconsin.

“I could not have done that with my family if I didn’t have the knowledge I got at the caregiver class,” Dori Ramsay said.

Tom Ramsay touted his wife’s ability to be a compassionate caregiver: “I adored her before; now I worship her,” he said.

Rich and Kusel, who have been together for about 25 years and have been married for a decade, had a less jarring introduction to life with dementia.

“We’ve just kind of slid into it,” Rich said.

“I really do try to live more in the present,” she added. “I don’t want to live in fear. Fear is just too devastating. We know what fear does to people.”

For her and her wife, Rich said, humor is a key ingredient for coping.

Davis acknowledged that discussions about Alzheimer’s are often sobering, and that laughter can be an antidote for families struggling to accept it.

“Sometimes,” he said, “I feel like if I can get everyone in the room to laugh, I’m halfway there.”

What: Caregiver Education Day, sponsored by the Memory Care Alliance for Northern New Mexico, an event for family caregivers and patients with dementia, professional caregivers and members of the public.

Register: Call 505-310-9752 or email david@memorycarenm.org; deadline to register is Wednesday, though organizers say no one will be turned away.