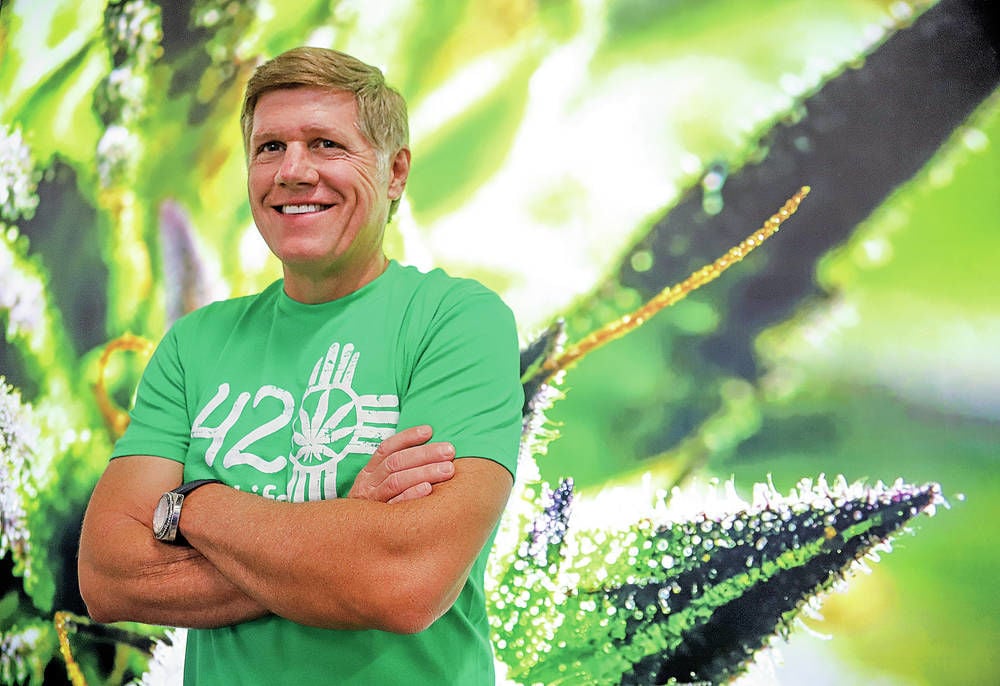 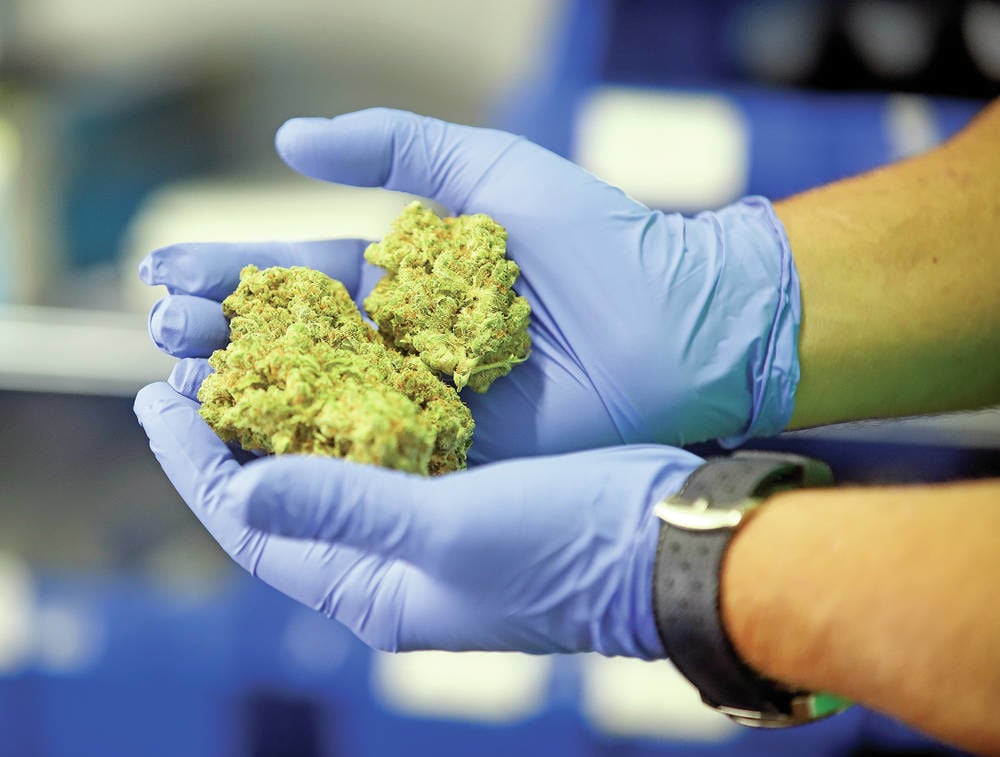 Darren White holds a handful of medical cannabis last week at his PurLife dispensary in Albuquerque. ‘It’s no different than the liquor industry or oil and gas,’ White says. ‘When you’ve got a $100 million industry, you’re going to see a lot of political contributions.’ Gabriela Campos/The New Mexican

Darren White holds a handful of medical cannabis last week at his PurLife dispensary in Albuquerque. ‘It’s no different than the liquor industry or oil and gas,’ White says. ‘When you’ve got a $100 million industry, you’re going to see a lot of political contributions.’ Gabriela Campos/The New Mexican

If you’re running for public office in New Mexico and need to raise money, there are traditional sources of campaign funds from the business world. Oil and gas is the main one, but there are plenty of others: the real estate sector, banking and finance interests, the liquor industry, pharmaceutical companies and auto dealers.

But look ahead a few years.

Though it’s currently nowhere near the level of more established businesses, a rising source of campaign contributions is marijuana — the people and companies that grow, package and sell the drug for the state’s medical marijuana program.

With public attitudes becoming more favorable — and the number of medical marijuana patients exploding in this state — contributions from the industry are rising. Though dwarfed by the nearly $1.4 million contributed by oil-related entities to political campaigns in 2018, those in the marijuana industry say their cash — and thus, their muscle — is growing.

“This year, revenue [for medical marijuana producers] topped $100 million in New Mexico,” said Duke Rodriguez, a former state health secretary who now owns UltraHealth — a nonprofit that operates dispensaries in Arizona and New Mexico. “But in the next five years, it’s going to grow even more.”

According to statistics compiled from the state’s Campaign Finance Information System and the National Institute on Money in Politics, the legal cannabis industry has spent more than $49,000 on state candidates and a handful of political action committees so far this election cycle. That’s nearly double the $25,150 the industry spent on campaign contributions in the entire 2016 election cycle.

Since 2012, cannabis-related businesses and the people who run them have contributed more than $110,000 to New Mexico politicians.

Rodriguez predicted last week that marijuana industry contributions to New Mexico politicians could begin to rival those from traditional campaign funding sources. “With legalization [of recreational marijuana] on the horizon, you’ll see that number rise to $600 million,” he said.

The market for medical marijuana in recent years has multiplied. When Gov. Susana Martinez took office, there were only about 3,000 patients in the state’s “compassionate cannabis” program. According to the state Department of Health, there were nearly 55,000 patients enrolled in the Medical Cannabis Program at the end of May — more than 6,300 in Santa Fe County alone.

Rodriguez headed the state Department of Human Services during Gov. Gary Johnson’s administration. His companies have been the biggest cannabis donors in New Mexico since 2012, giving a combined $38,700 since that year — a total that includes a $5,000 contribution this year to Democratic gubernatorial candidate Michelle Lujan Grisham from Cumbre Investments, a firm Rodriguez runs.

Rodriquez and his companies have given New Mexico politicians $24,200 this year, including a total of $10,000 to Lujan Grisham; $5,000 to Jeff Apodaca, who ran against Lujan Grisham in the Democratic primary; and $2,500 to Attorney General Hector Balderas. Rodriquez also contributed $5,000 to state House Republican leader Nate Gentry, who decided against seeking re-election early this year.

Lujan Grisham has taken in more than $29,000 from the marijuana industry this year, making her the biggest recipient of cannabis contributions. In second place this year is Apodaca, who drew at least $11,610.

Lujan Grisham also received the most money from a single marijuana source — PurLife, an Albuquerque company headed by Darren White, another former Johnson Cabinet secretary and a onetime anti-drug warrior.

White, a former Bernalillo County sheriff and state public safety chief, is a staunch Republican and longtime high-profile supporter of Martinez. He only recently did a 180-degree shift from his previous views against medical cannabis. His company contributed $11,000 to the Democratic standard-bearer.

“Our company got behind Michelle pretty early and we maxed out [its allowable contributions] quickly,” White said.

White noted Lujan Grisham’s long support for the state’s medical marijuana program, which she implemented while serving as secretary of the state Department of Health.

Though PurLife is “maxed out” in its contributions to Lujan Grisham, White said he soon will give her a contribution from his own pocket.

White surprised the New Mexico political world two years ago when he applied for a medical marijuana producer’s license. He resigned from his job as secretary of the state Department of Public Safety in 1999 after Johnson came out in favor of legalizing marijuana. Not long after he’d quit, White worked as a lobbyist in the Legislature working against Johnson’s drug-reform bills — including bills to legalize marijuana as a treatment for certain medical conditions.

He said the fact that medical marijuana is a growing factor in political campaigns doesn’t surprise him — and he expects even more campaign contributions from the industry in the future.

“It’s no different than the liquor industry or oil and gas,” he said. “When you’ve got a $100 million industry, you’re going to see a lot of political contributions.”

Besides UltraHealth and PurLife, another medical marijuana company making major donations to campaigns is Natural Rx and its president, Trevor Reed; together, they have contributed $21,100 since 2012. In 2016, Placitas resident Reed was New Mexico’s biggest donor to Johnson’s run for president as the Libertarian Party nominee.

However, only about half the state’s 35 licensed producers have contributed to political campaigns. Rodriguez said he’s talked with other marijuana producers to try to convince them to get politically active.

If there’s a template for what the future might bring, it’s in Colorado, where voters in 2012 passed a constitutional amendment legalizing the recreational use of marijuana for adults 21 or older. That state also has seen an uptick in campaign contributions from the cannabis industry.

“It’s a maturing, evolving industry that’s interested in responsible regulation,” said Peter Marcus, a spokesman for Terrapin Care Station, a Boulder, Colo.-based marijuana producer, which has been growing and selling marijuana for medical patients for nearly a decade.

The publication Colorado Politics reported in June that the marijuana industry has contributed $223,000 to candidates for statewide offices as well as to political parties. That figure does not include money contributed to marijuana ballot initiatives.

While political money from legal marijuana is growing in Colorado, the raw numbers aren’t significantly more than New Mexico’s cannabis contributions. Marianne Goodland, who wrote the article in Colorado Politics, pointed out in an interview last week that Colorado has lower campaign contribution limits — about 10 percent of New Mexico’s limit.

Also, Goodland said, one of the biggest supporters of legal marijuana in Colorado — U.S. Rep. Jared Polis, a Democrat running for governor — has a self-imposed $100 limit on contributions.

“What we’re seeing here is more money being spent on lobbyists than campaign contributions,” Goodland said. “They spent between $600,000 to $700,000 on lobbyists in this year’s session.”

New Mexico has yet to see much in the way of lobbying by marijuana producers. UltraHealth had four registered lobbyists here in 2017 and two at this year’s legislative session. Companies in this state are not required to report how much they pay lobbyists.

Another difference between New Mexico and Colorado: While nearly 75 percent of the cannabis cash goes to Democrats here, producers in Colorado give a significant amount to Republicans, Marcus said.

Goodland said both campaign contributions and lobbying by marijuana producers intensified after her state — which has had a medical marijuana program for 18 years — legalized recreational use of the drug. She said she’d expect the same thing to happen in New Mexico if the state legalized marijuana for other than medical use.

Rodriquez agrees. And he said he believes marijuana will become legal in the state.

He said he was heartened by a recent meeting of the legislative Revenue Stabilization and Tax Policy Committee at which legalization was discussed.

“That was the first meeting in the Legislature I’ve been to in which the conversation didn’t degenerate into talk about ‘gateway drugs’ and social ills,” he said. “That’s a tremendous step forward.”

The people and companies that grow, package and sell marijuana for the state’s Medical Cannabis Program have become a rising source of campaign contributions.

Major recipients of cannabis cash for 2018