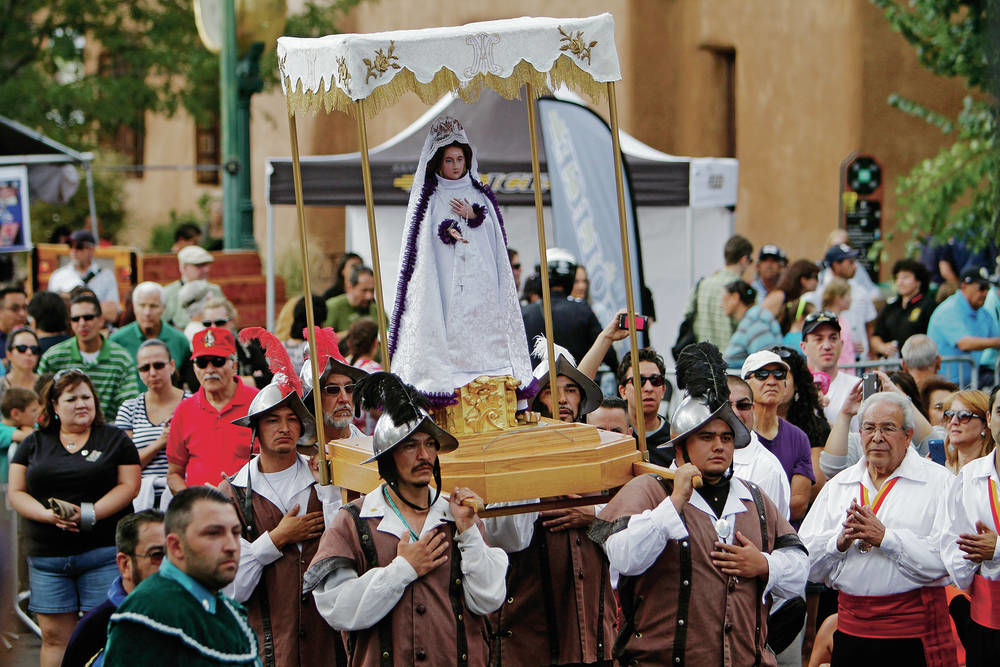 Los Caballeros de Vargas carry La Conquistadora during the Fiesta de Santa Fe in 2014. The oldest continuously venerated image of the Virgin Mary in the U.S. will continue to play a part in the festivities now that the re-enactment of the Entrada has been abolished, the group’s president says. Luis Sánchez Saturno/The New Mexican file photo 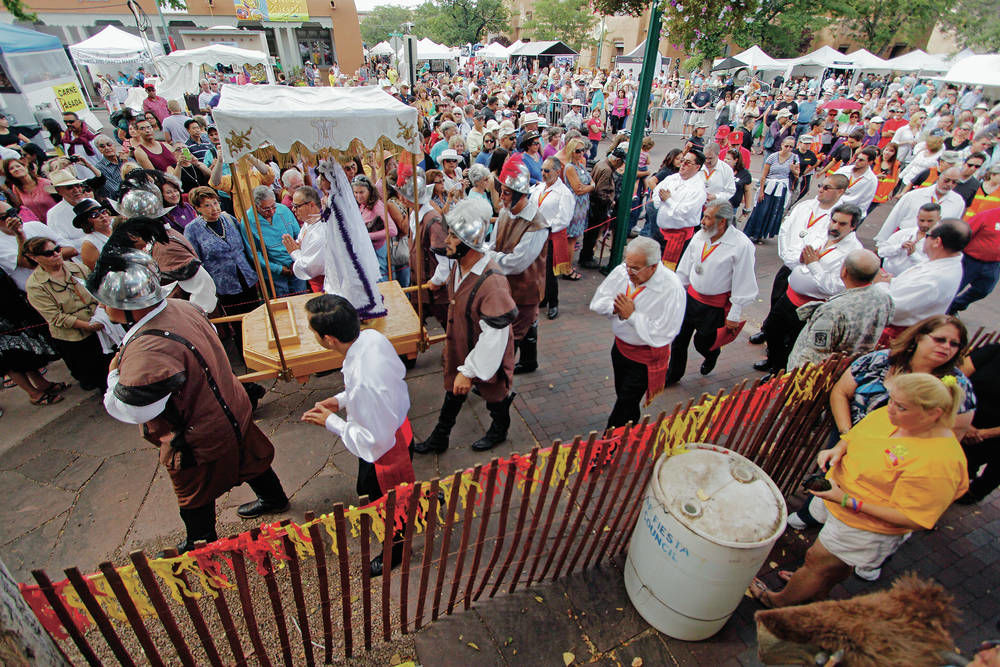 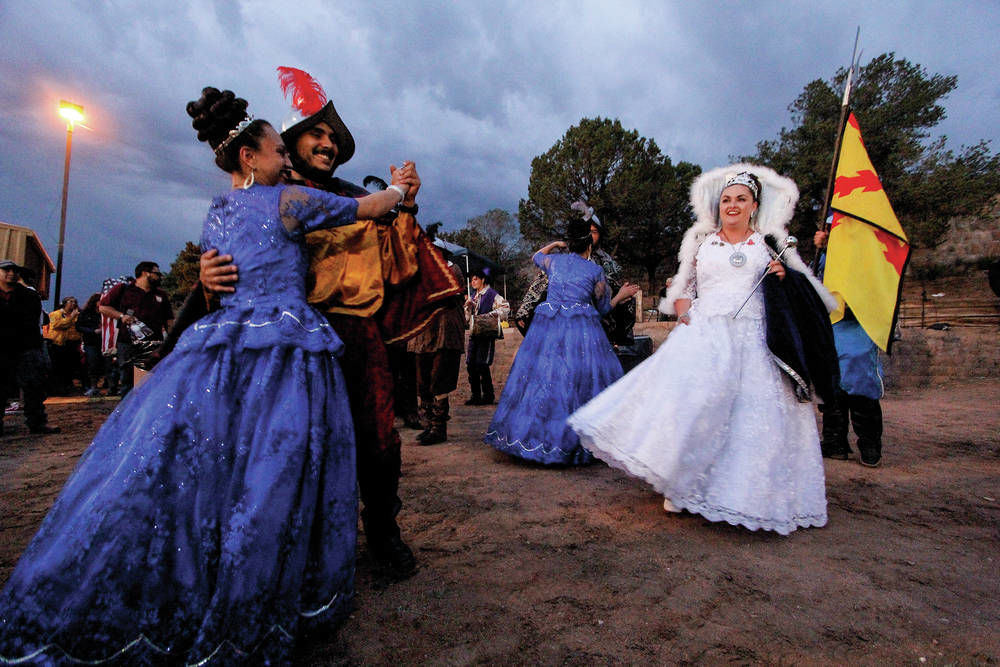 La Reina, Hope Andrea Quintana, dances at the annual burning of Zozobra with the rest of the fiesta court in 2017 at Fort Marcy Park. Gabriela Campos/The New Mexican file photo

Los Caballeros de Vargas carry La Conquistadora during the Fiesta de Santa Fe in 2014. The oldest continuously venerated image of the Virgin Mary in the U.S. will continue to play a part in the festivities now that the re-enactment of the Entrada has been abolished, the group’s president says. Luis Sánchez Saturno/The New Mexican file photo

La Reina, Hope Andrea Quintana, dances at the annual burning of Zozobra with the rest of the fiesta court in 2017 at Fort Marcy Park. Gabriela Campos/The New Mexican file photo

The Entrada re-enactment is finished, but the Caballeros de Vargas are not.

The group that put on the controversial dramatization of Spanish conquistadors reclaiming the city from American Indians 12 years after the Pueblo Revolt is planning a “new event” in place of the Entrada during this year’s Fiesta de Santa Fe.

“We have that time slot there, and we’ve had that time slot for so many years, we didn’t want to just leave the community with a void, you know?” Thomas Baca-Gutierrez, president of the group, said Tuesday.

“We didn’t want to leave the community feeling like we’re gone. We’re not gone,” he said.

News of a new but still undefined event comes a week after a spokesman for a coalition that included representatives from the Caballeros, the All Pueblo Council of Governors, the Santa Fe Fiesta Council, the Archdiocese of Santa Fe and the mayor’s office announced the Entrada was ending.

The Caballeros issued a statement Tuesday outlining their reasoning behind doing away with the Entrada, which prompted a flurry of statements from others, ranging from the archbishop to former mayors to the current mayor.

The pageant, started in 1911 as part of an effort to drive tourism in the city, depicted the re-entry of conquistador Don Diego de Vargas into Santa Fe in 1692 after the Pueblo Revolt of 1680. Re-enacting it exacerbated lingering tensions between Natives who say it is a symbol of colonialism and mostly longtime Hispanic families who insist it depicts a moment of peace.

Though the new event is still in the planning phases, Baca-Gutierrez said it will focus strictly on Our Lady of Peace, the oldest continuously venerated image of the Virgin Mary in the U.S.

The 30-inch statue, brought from Spain in 1625, was carried by settlers to the El Paso area during the Pueblo Revolt.

Known by many names, including Our Lady of Conquering Love, which the Caballeros say captures the spirit of the original title of La Conquistadora, the statue was later part of de Vargas’ expedition to resettle Santa Fe. The Spanish conquistador believed she had answered his prayers to retake the city without bloodshed, giving birth to the Fiesta de Santa Fe to give thanks for her role in the reconquest.

Baca-Gutierrez said it’s difficult to describe the new event because it’s a work in progress.

“We still have to meet about it and continue planning it and making it as best as we possibly can, but a lot of it is going to be narrated,” he said. “We’re still working on the story right now, but it’s going to focus on peace, most of all.”

Baca-Gutierrez said he didn’t know whether the Caballeros would be dressed as conquistadors during the new event.

Asked whether he was concerned the new event would trigger opposition or protests, Baca-Gutierrez didn’t rule it out.

“I don’t see a reason why anybody would, but you never know,” he said. “People don’t agree with anything nowadays. Everybody is offended by everything.”

But Baca-Gutierrez said he hopes the new event won’t generate controversy — especially following the monthslong dialogue and negotiations among tribal leaders, church officials and members of the Caballeros and Fiesta Council.

“I think we’ve come a very long way, and we need to continue to do that so if [a protest] was to happen, it would go against what we’ve been working for, which is peace with one another and to make sure that we’re all united,” he said.

Elena Ortiz, who has helped organize protests to the Entrada, said the Caballeros have the freedom to do whatever they want “as long as they’re not talking about history” or “glorifying conquest.”

“They have the freedom to do what they want as long as they’re not addressing conquest and genocide,” she said. “If they’re just doing a religious thing, that’s their business.”

Asked about the potential for a protest to the Caballeros’ new event, Ortiz, a member of the Ohkay Owingeh Pueblo, said “it depends on what it looks like.”

While Ortiz said she is happy the Entrada is finished, she reiterated her call to end the Fiesta Court’s appearances in Santa Fe public schools, a long tradition that she says promotes revisionist history to children. When the Fiesta Court visits area schools, members of the group are dressed as conquistadors, including the man who portrays Don Diego de Vargas.

“I definitely want Don Diego out of the schools,” Ortiz said. “That is something that has not yet been addressed.”

Melissa Mascareñas, Fiesta Council president, said there are no immediate plans to end such visits.

“The school board has not contacted me saying that we’re not allowed to go to the schools, so it’s my plan that we’re going to be there like every year,” she said.

Mascareñas said the decision to retire the Entrada was not easy. She intends to sign a new resolution to end the contentious pageantry.

“We have deviated from the original intent of honoring Nuestra Señora de la Paz,” Mascareñas said in a statement. “We regret the suffering, trauma and pain the Pueblo people endured.”

Baca-Gutierrez said Estevan Rael-Gálvez, a former state historian who is a writer and consultant, “offered his hand to help with the new event.”

Rael-Gálvez participated in the closed-door discussions that led to the end of the Entrada.

“I have been able to witness and participate in this monumental and transformative process of ending this 20th century invented tradition,” Rael-Gálvez said in an email. “It marks, however, just the beginning of necessary work toward reconciliation and healing. In this way, we have the opportunity to remember our communities whole, connecting a more truthful past with the present …”

Key players in the negotiations that led to the end of the Entrada had designated Regis Pecos, a former Cochiti Pueblo governor, to be the spokesman for the group. In an exclusive interview with The New Mexican last week, Pecos disclosed the various groups had agreed to abolish the Entrada.

On Tuesday, after the Caballeros issued a news release officially announcing the “retirement” of the Entrada, a number of official statements followed, each lauding the decision.

“The announcement [Tuesday] is a beginning, not an end,” Mayor Alan Webber said in a statement. “It opens up a new chapter for Santa Fe, with new opportunities for events and programs that reflect our City’s unique history, culture, and sense of community. Santa Fe continues to lead by example — and for that we should all be very proud and give our thanks to the Caballeros and the other organizations and individuals whose leadership have given us this gift of peace and unity.”

Archbishop John C. Wester said he was “filled with hope” by the decision to end the Entrada.

“We pray this historic step will allow for healing, and lead to further solidarity with our brothers and sisters of all cultures,” Wester said in a statement.

In their news release, the Caballeros said they hoped the end of the Entrada “will allow for the healing of our brothers and sisters and lead to further unification of all cultures.”