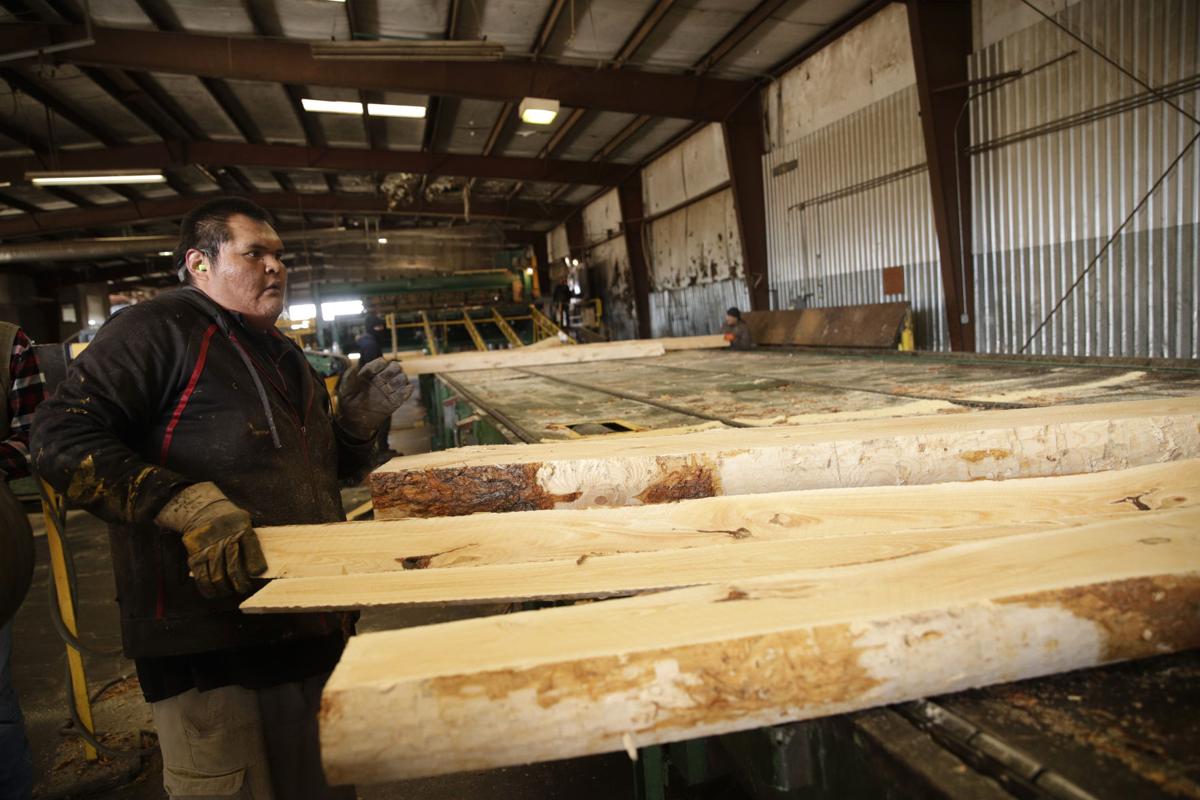 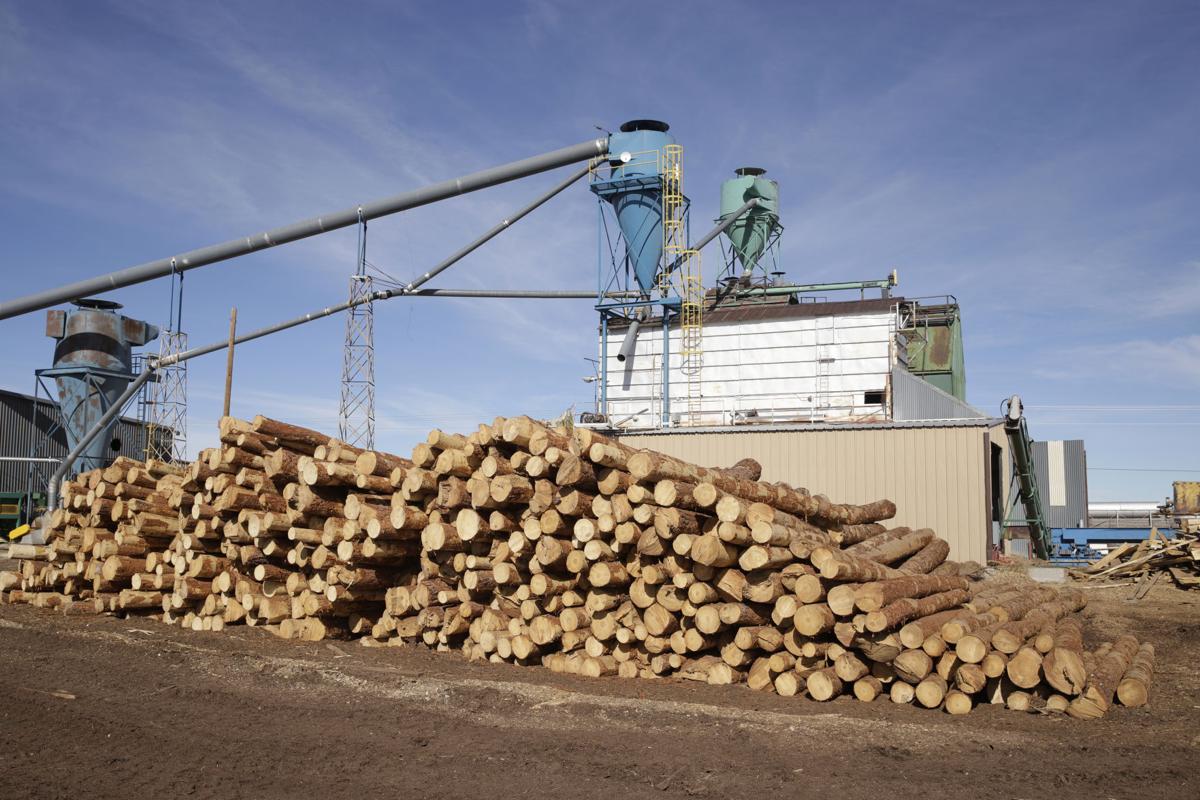 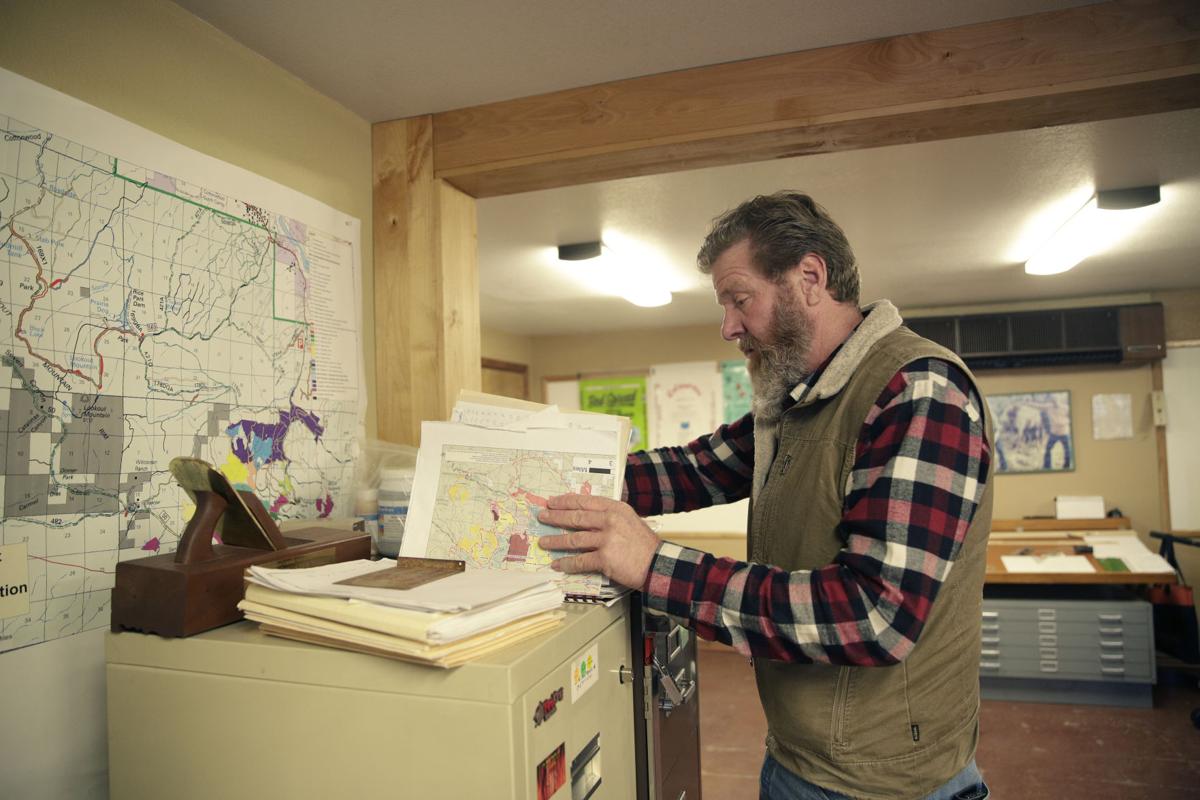 Matt Allen, owner of Mt. Taylor Manufacturing, peruses documents in his office in Milan on Thursday. 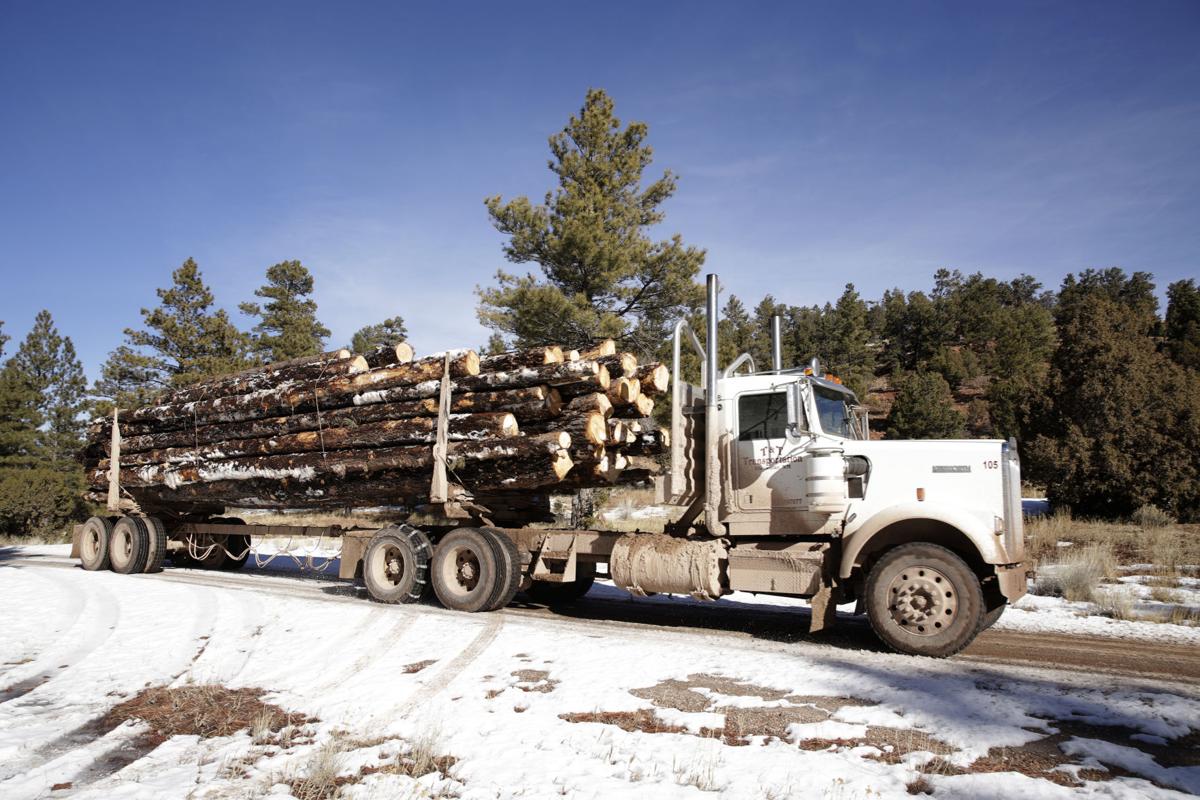 A trucker with Mt. Taylor Manufacturing hauls logs to the sawmill in Milan on Thursday. In light of a recent court order restricting timber operations in Mexican spotted owl habitat, the company is relying on logs from private land as a stopgap.

Matt Allen, owner of Mt. Taylor Manufacturing, peruses documents in his office in Milan on Thursday.

A trucker with Mt. Taylor Manufacturing hauls logs to the sawmill in Milan on Thursday. In light of a recent court order restricting timber operations in Mexican spotted owl habitat, the company is relying on logs from private land as a stopgap.

MILAN — Mount Taylor’s snow-frosted peaks tower in the distance as Matt Allen hurries past a stack of newly cut ponderosa pine beams and enters the sawmill he is struggling to keep afloat amid a court battle.

The mill’s conveyors are rumbling and the saws are slicing logs that were recently harvested on private land. This is the first day in more than a month that the mill is running.

It was silenced in mid-December because of a monthslong court injunction that barred logging anywhere near Mexican spotted owl habitat in New Mexico’s five national forests.

A federal judge imposed the ban on timber activities in September based on a 2013 lawsuit by the Santa Fe-based environmental group WildEarth Guardians that claimed the U.S. Forest Service failed to adequately monitor the spotted owl, which has been listed as threatened under the Endangered Species Act since 1993. A month later, the judge allowed limited cutting, such as Christmas tree harvests, outside owl territory.

Allen feels caught in the crossfire.

The trees outside the owls’ habitat are juniper and piñon, he says. His operation uses ponderosa pine — the trees on which the owls nest — so the judge’s revised order doesn’t help his mill.

The mill got by for a few months on a stockpile of wood. When it ran out, Allen says, he gave the 43-man crew — almost all Navajo — odd jobs so they could support their families during the holidays and not have to deprive their children of Christmas presents. The mill is one of the few employment sources for the Navajo Nation in Cibola County.

But it meant absorbing a hefty financial loss.

“We are bleeding money,” Allen says. “Everything in this game is very expensive.”

The logs that recently came from private land are a stopgap for Allen’s mill, which needs timber from federal forests to survive, he says.

The selective logging his company does creates spaces between trees that curb the spread of wildfires in owl habitat, Allen says.

“The disappointing thing in my heart is I know what we’re doing is good for the forest,” Allen says.

A team of federal biologists mostly agrees with him.

They concluded careful tree thinning and prescribed burns might cause short-term damage to owl habitat, but they benefit the species overall by preventing large wildfires and enhancing undergrowth to enable the owl’s food sources — wood rats, squirrels and small reptiles — to thrive.

The Forest Service included the biologists’ opinions in a recent motion to allow timber harvests to resume near owl habitat in Cibola, Santa Fe, Gila, Carson and Lincoln national forests in New Mexico and Tonto National Forest in Arizona.

The judge has yet to rule on whether the biologists’ opinions prove the Forest Service is doing enough to monitor the impacts of tree thinning on the owls.

An environmental advocate doesn’t believe the proof is there.

“While some limited, judicious thinning is probably OK … there is no empirical data that assesses the benefits and harm, that assesses the projects that Mt. Taylor Manufacturing is doing,” says John Horning, WildEarth Guardians’ executive director. “There’s a tremendous amount of complexity in the forest ecosystem, in fire ecology.”

The debate itself is complex with much disagreement, Horning says. But beneath the wrangling about the owl are the fundamental disputes about managing the forests so they thrive rather than struggle to survive, he says.

Since the 1980s, environmental activists have shared Horning’s basic sentiment that the spotted owl is like a canary in a coal mine. The species’ decline, they claim, reflects the forests’ waning health because of overcutting. In recent years, scientists have pointed to climate change causing droughts that make forests more prone to wildfires and pests.

The debate now is whether it’s better to thin the drier forests, including near owl habitat, to prevent wildfires from rapidly spreading or whether limited logging inflicts further damage.

In the 1990s, federal forest policies began to restrict tree cutting throughout the West to protect the owl, causing many lumber mills to shut down or severely reduce their output. Displaced timber workers accused the government of putting birds before people.

Allen, who says he considers himself politically conservative, believes wildlife, including the Mexican spotted owl, should be protected. He also thinks the Forest Service did a poor job of managing the forests, allowing too much logging for decades.

The heaviest logging occurred in the Zuni Mountains between the late 1890s and 1917, when timber companies clear-cut the forests to almost nothing, he says. Ranchers later let their livestock graze on the denuded land, consuming what vegetation remained.

The trees that grew back on the barren landscape were mainly thin ponderosa pines, juniper and piñon. So it’s flawed logic for environmental groups to espouse treating an unnatural forest as though it’s virgin old growth that should be left alone, Allen argues.

Wildfires will consume what have become tinderboxes if some gaps aren’t created between the trees, he says. These fires will not only burn owl habitat, but they will shower the watershed with ash, harming fish and other wildlife.

“A healthy forest fire in a natural forest is a good thing, but these are not healthy forests,” Allen says. “I don’t see any way to satisfy WildEarth Guardians except pull out and not cut anything.”

Horning insists there is no peer-reviewed science to back statements about selective logging being a fire remedy. Any logging near owl habitat, he says, is likely to hurt the species, he says.

The devastating wildfires in Australia and California show that preventing forest fires, especially in drier conditions brought on by climate change, cannot be avoided, short of cutting down all the trees, Horning says.

Jim Largo, a Navajo who works as the mill’s foreman, says WildEarth’s contention that tree thinning is damaging the forests and killing the owls is wrong.

Locking down the forests only hurts operations like Mt. Taylor Manufacturing, Largo says. The sawmill provides jobs and training to Navajos who have limited education and work experience, he says.

At the moment, the crew is mostly Navajo, he says. If the mill were forced to shut down, it would be a huge blow to the tribe, he says.

“All the Navajos are going to be hurting for work,” Largo says.

Unemployment in the Navajo Nation is more than 40 percent, Allen says, and the area is already losing jobs, with a coal-fired power plant in danger of closing and a coal-mining operation eliminating 100 jobs.

This latest court fight over the spotted owl isn’t the first storm the company has weathered in its long history. Mt. Taylor Manufacturing has been in Allen’s family since 1965.

At his father’s request, Allen came to work in the family business in the late 1980s. He took the reins as CEO when his father, Ted Allen, suffered a stroke in 1998.

The mill back then produced wood moulding. At its peak, it employed 96 people and grossed $11.5 million a year.

When the legal battles over the spotted owl locked down public forests in the 1990s, the company bought wood from Mexico, Chile and New Zealand.

Everything changed about 10 years ago after the recession and housing crisis struck. The market for homebuilding supplies dried up, and the company’s workforce dropped to a dozen employees.

In 2014, Allen began grinding fallen trees from Cibola National Forest into fuel pellets as part of a federal program to convert biomass into energy. The Forest Service also touted it as a fire-prevention program that removed flammable dead wood from the forest floors.

Allen opened a plant to process pellets from wood cut up at the sawmill. He diversified even more by producing playground chips, running an industrial machine shop and offering recycling services for wood waste. He estimates his operation has diverted 10 million to 12 million pounds of wood waste from the landfill in the past five years.

“I’m about as green as a company can be, and I’m about to be buried by WildEarth Guardians,” Allen says.

He questions whether the group wants to drive companies like his out of business. In December, the group filed another notice of an intent to sue so it can put a different lawsuit in place — and continue to block logging — if the judge rules to lift the injunction, Allen says.

Horning says the purpose of that lawsuit, should it be filed, is to ensure the same thorough monitoring is done in all of the Southwestern region’s 11 national forests, not just the six in dispute.

He says his intent is not to hurt any companies, only to protect the owl and the forests.

“A much more cautious and go-slow process is what’s needed,” Horning says.

Allen says his company takes a careful approach to tree thinning. As he walks through a wooded hilltop tract that Mt. Taylor Manufacturing harvested, he points out the clumps of ponderosa pines where owls can nest.

He calls the woodland beautiful, noting the small meadows that logging crews carved out let you see the mountains through the trees.

“The old days of the lumber baron clear-cutting everything is gone,” Allen says.