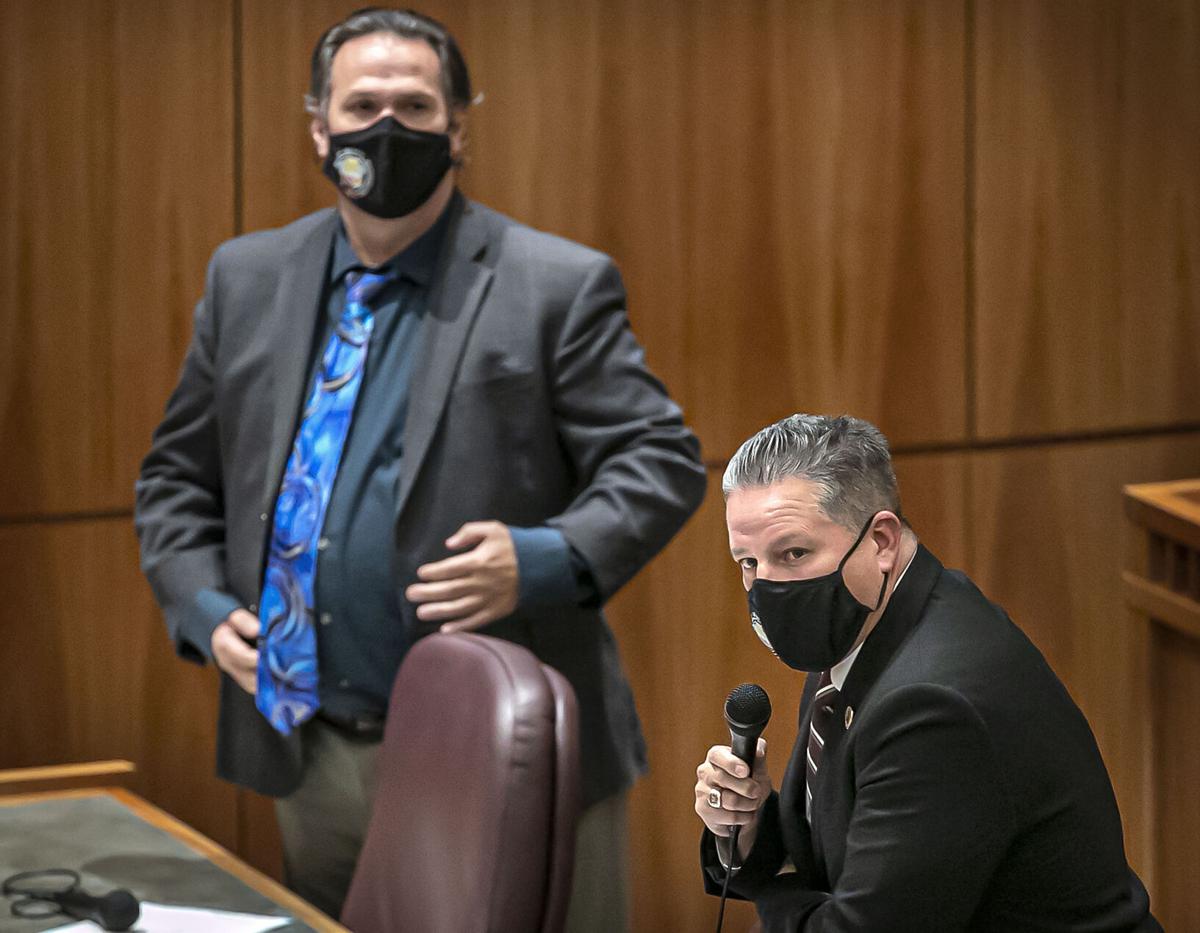 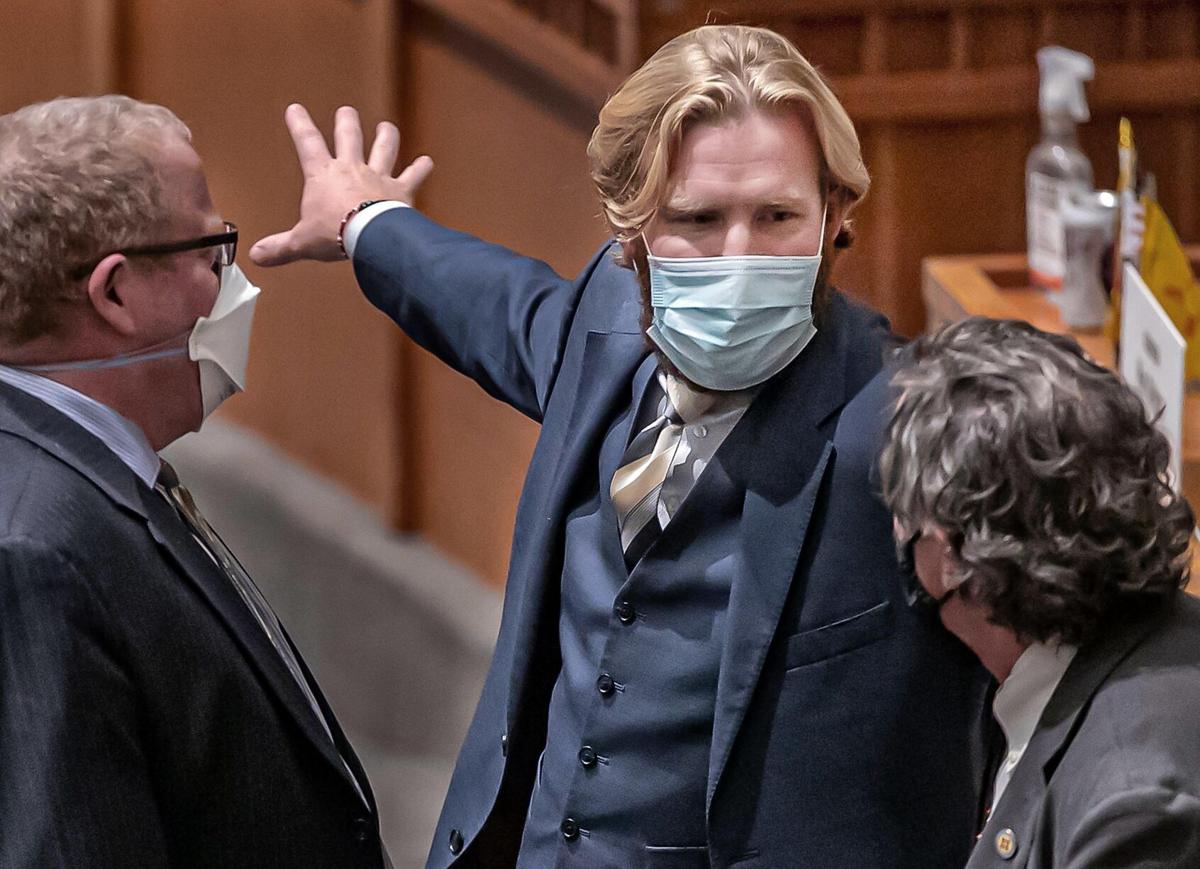 Republican Sen. Cliff Pirtle talks with fellow legislators Thursday during a series of breaks on the contentious redistricting bill in the New Mexico Senate. 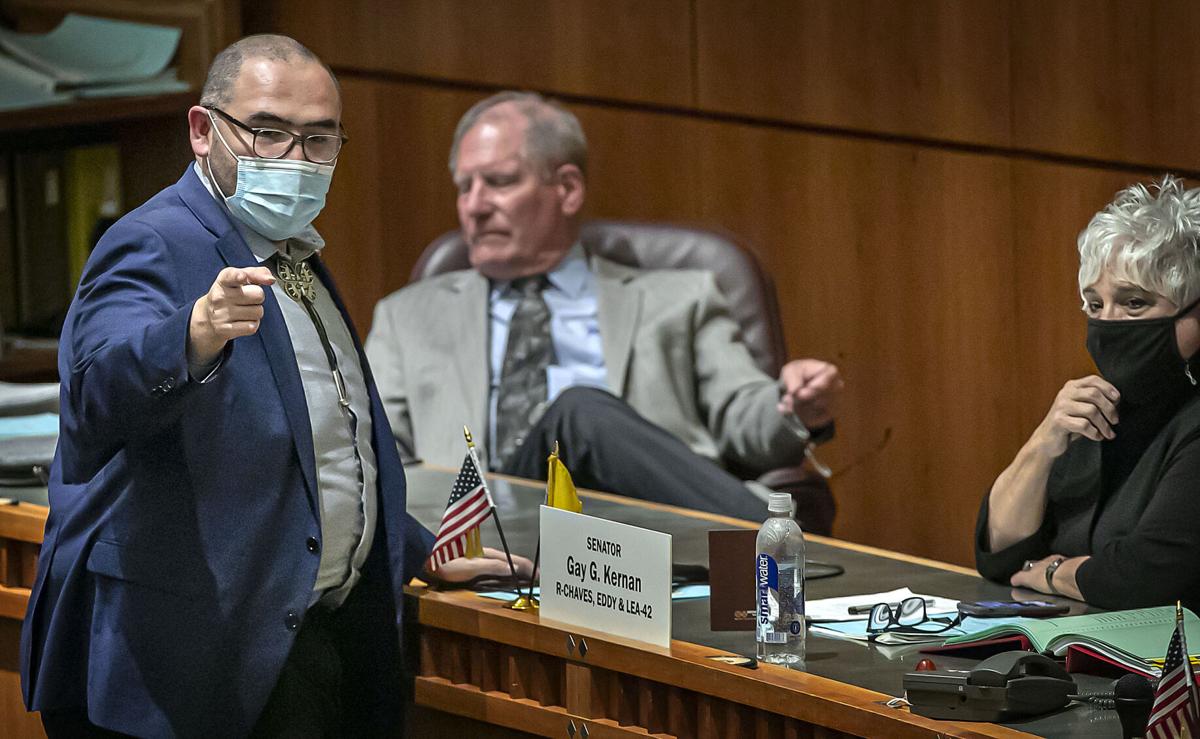 Sen. Jacob Candelaria, left, talks with Sen. Gay Kernan as legislators wait to debate a redistricting bill Thursday in the New Mexico Senate. While Republican senators delayed the bill, representatives from the Indigenous community expressed their concern Democrats might renege on agreements they made earlier in the process.

Republican Sen. Cliff Pirtle talks with fellow legislators Thursday during a series of breaks on the contentious redistricting bill in the New Mexico Senate.

Sen. Jacob Candelaria, left, talks with Sen. Gay Kernan as legislators wait to debate a redistricting bill Thursday in the New Mexico Senate. While Republican senators delayed the bill, representatives from the Indigenous community expressed their concern Democrats might renege on agreements they made earlier in the process.

Though state lawmakers concluded a special session focused on redistricting Friday afternoon, the bruises from what transpired for nearly two weeks may be evident for a long time to come.

A collision of politics, ethnicity, race and rancor gushed on the Senate floor Thursday night as it debated Senate Bill 2, which contained that chamber’s new map for the next 10 years. Angered by what they said was an effort to mute Hispanics, several GOP lawmakers said it may be a long time before legislators in the two parties can work together.

“I think it’s going to be a very difficult path ahead for any trust to be reestablished,” said Sen. Craig Brandt, R-Rio Rancho.

Senate Majority Leader Peter Wirth, D-Santa Fe, agreed more needs to be done to connect the two parties in the future, especially with the regular 30-day legislative session only weeks away.

“No question, it was a very challenging evening,” Wirth said of Thursday’s session on the Senate floor. “It was an unfortunate debate, and the language used is challenging and causes concern about relationships.”

Though discord is not uncommon in the Legislature, particularly in the past year when lawmakers jousted over legalizing cannabis, updating the state’s liquor license laws, abortion rights, crime and gun ownership, the raw emotion and frustration of Thursday’s debate unleashed long-simmering tensions centering on New Mexico’s Hispanic voters.

“If you’re not the right kind of Hispanic, we’re gonna smite you,” Sen. Mark Moores, R-Albuquerque, said, describing the GOP’s accusation that new political maps pushed through by Democrats were aimed at silencing conservative Hispanics.

Sen. Greg Baca, R-Belen and Senate minority floor leader, said during the debate 48 percent of New Mexico’s residents are Hispanic and are being “cheated” out of legislative seats. In the new Senate map, Baca and Sen. Joshua Sanchez, R-Bosque, now are in the same district.

He said Democratic senators working on the Senate map managed to unpair every other team of incumbents sharing a district — all of them white — except for two Democrats, Bill O’Neill and Jerry Ortiz y Pino of Albuquerque. Ortiz y Pino told The New Mexican on Friday he does not plan to seek reelection at the end of his term, which ends in 2024.

“It really affected the trust I have in leadership on the other side,” Baca said, adding promises were made and later broken.

“You can’t make promises like that in redistricting,” she said.

She said she tried her best to unpair Baca and Sanchez but found it difficult in trying to adhere to the wishes of the state’s Native American leaders, who came together to propose a consensus map that would create three Native American majority voting districts.

“It’s a perfect example of, you try to fix one thing and it has this ripple effect around the state,” she said.

The scars left by the mapmaking process will be evident for some time, Brandt said.

He asked, “How do you trust someone who just flat-out broke their word?”

Stewart and Wirth said they already met with Baca and will work to rebuild that trust in the Senate.

“Everyone understands the importance of having good relationships in this chamber, and while they may be strained, I feel confident they are repairable and am committed to making that happen,” Wirth said.

“It was messy and painful, people’s feelings got hurt,” Stewart said of Thursday’s fracas. “I have committed to the minority party that I will continue to work with them. My role is to listen to everybody and make sure we do collaborate. Not everybody is happy.”

But she added: “I believe we will get over this.”

“We have to put it aside,” he said, “or New Mexico will remain last on many lists.”

Republicans remained angered by Democrats' changes to maps offered by the Citizen Redistricting Committee, complaining they were altered to favor one party and also marginalize GOP Hispanics in the Legislature.

This type of political behavior is why our state languishes at the bottom in our United States!

Who...so far has risen up to bring things together for the benefit of our children? The state and our future? I don't see anyone?

The power that comes from being in control has intoxicated those with it, and it seems that the voters don't care.

Thus, nothing will change and our best and brightest children will continue to exit the state and enrich other states around us.

We have won the race to the bottom.

Maybe one day, enough will awaken and vote those who would continue to punish our beautiful NM and vote in people who put our children, our seniors, our schools & our businesses and futures FIRST.

I can only hope!

The Democrats have a huge majority and they did what majorities do. That's why they are there. This is so typical, if the Republicans are in charge they Gerrymander to their hearts content. When they are not they cry because the majority doesn't unilaterally surrender to them. As their last resort they cry race like they did in Virginia. Want to control the process? Win more seats.

Yes, of course that is all true, and the Ds did exactly as they wanted to max out their political advantages without any input from the GOP or the peanut gallery of the public. And that's fine, it is expected in today's politics, but the problem is the lies they told everyone to act like that was NOT what was going on. Honesty is worth something here, they didn't tell the truth about what they were doing.

This is not the first time the Trifecta simply steam rollered the opposition, its become their norm. Their passage of the Cannabis Act in a Special Session was more of the same. Now the Cannabis Act is being implemented illegally, and using Emergency Rule Making which allows for no public input, by these same folks. Its past ridiculous, its illegal, but nobody cares. All made possible by driving conservative Democrats, like John Arthur Smith and Mary Papen from office, along with Rep. Carl Trujillo, my representative. Egolf and MLG seem intent on turning New Mexico into a drug state, with no effective oversight. Egolf is attorney for the biggest pot grower, and MLG's reelection campaign can use the pot contributions. The welcome mat is out, our movie set state welcomes all the dirty players. We have become the poster child for government corruption and police violence; under MLG, Egolf and Wirth; not to forget our Attorney General Balderas of course.

[thumbup]MLG and the left wing no doubt noticed the data that fentanyl is the dominant drug in NM today, so a gold mine for legalizing, taxing and regulating, soon a bill will be introduced for this.

Mike is right. The left is happy now so they will argue that nothing untoward happened. NM is soiling their own nest. Expect to see more taxpayer exoduses to freer and more honest states. When that happens where will NM get their money? The rich won't love the burden of having to pay for it all. When they get affected, then they will scream and yell or easily have the funds to move away.

Mimi and Wirth showed their true colors in this brutal and vindictive episode of corrupt NM politics as usual. Only worse now, and will be forever, since these two politicians have no intention of doing anything but divide and conquer their enemies. They proved why NM is last in all things, and will remain so.

Wirth is "my" senator, so I'd like to hear how he was "vindictive" as the only such rhetoric I heard in the hours of the hearing was from Republicans, sadly. Some complained that newish senators won't respond to friendly greetings; after their (GOP) performances, I'd sure be tempted to avoid them.

He allowed and encouraged the removal of Jacob from his committee as payback for winning a Supreme Court suit against MLG, you want more than that?

An interesting allegation, Mike. How can I learn more? He removed Jacob in spite? Say more, please.

To me (newbie) the SCt decision seemed to make sense. I like MLG but even with a pandemic, the legislature should be able to weigh in on SOME spending. Immediate needs, maybe the Gov's call, but after that...

Emily, just listening to the hearings is only a small slice of all that goes on....shenanigans abound, as Mike said.

Brant, Baca and Moore were beyond “emotional “ and into mean-spirited. So unimpressive.

Ever been run over by a steam roller? It's emotional. You're unimpressed??? Of course!

Chris, you think they hadn't already noticed they were in the minority?