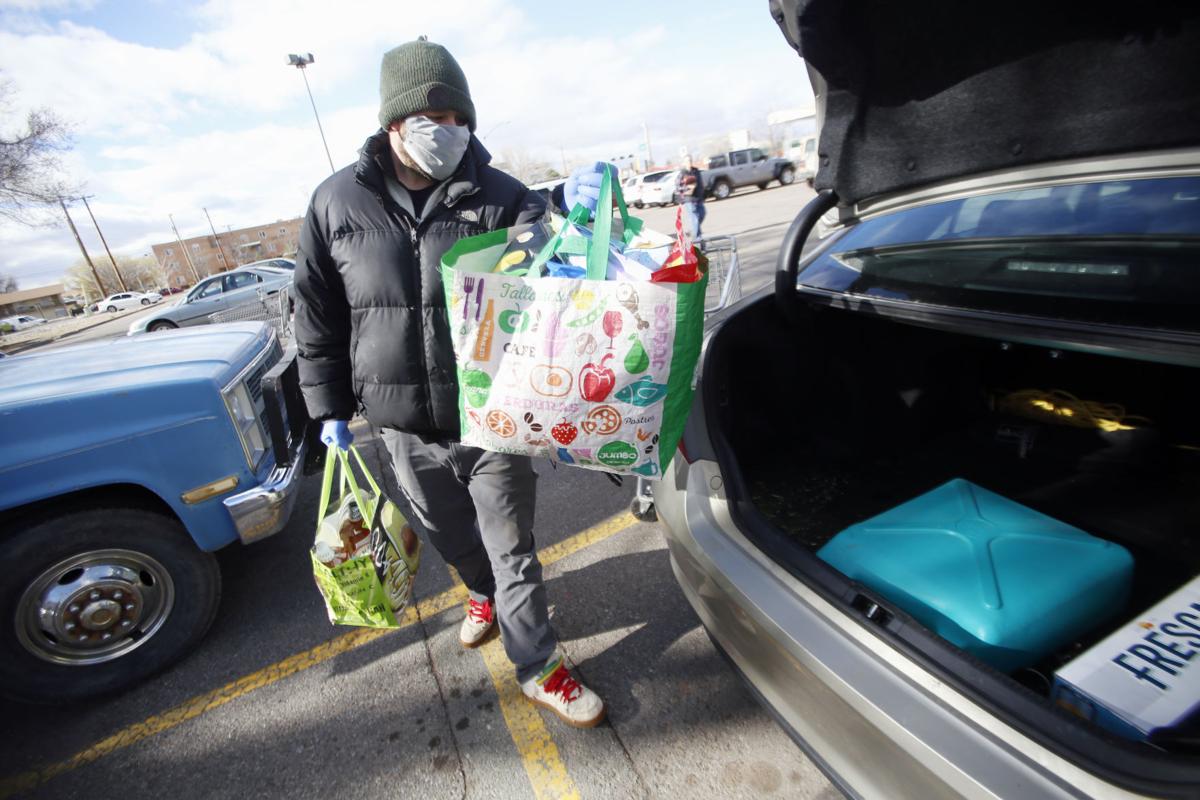 Wearing a protective mask, James Valdez of Santa Fe puts groceries in his vehicle Thursday outside Smith’s Food and Drug on Cerrillos Road. 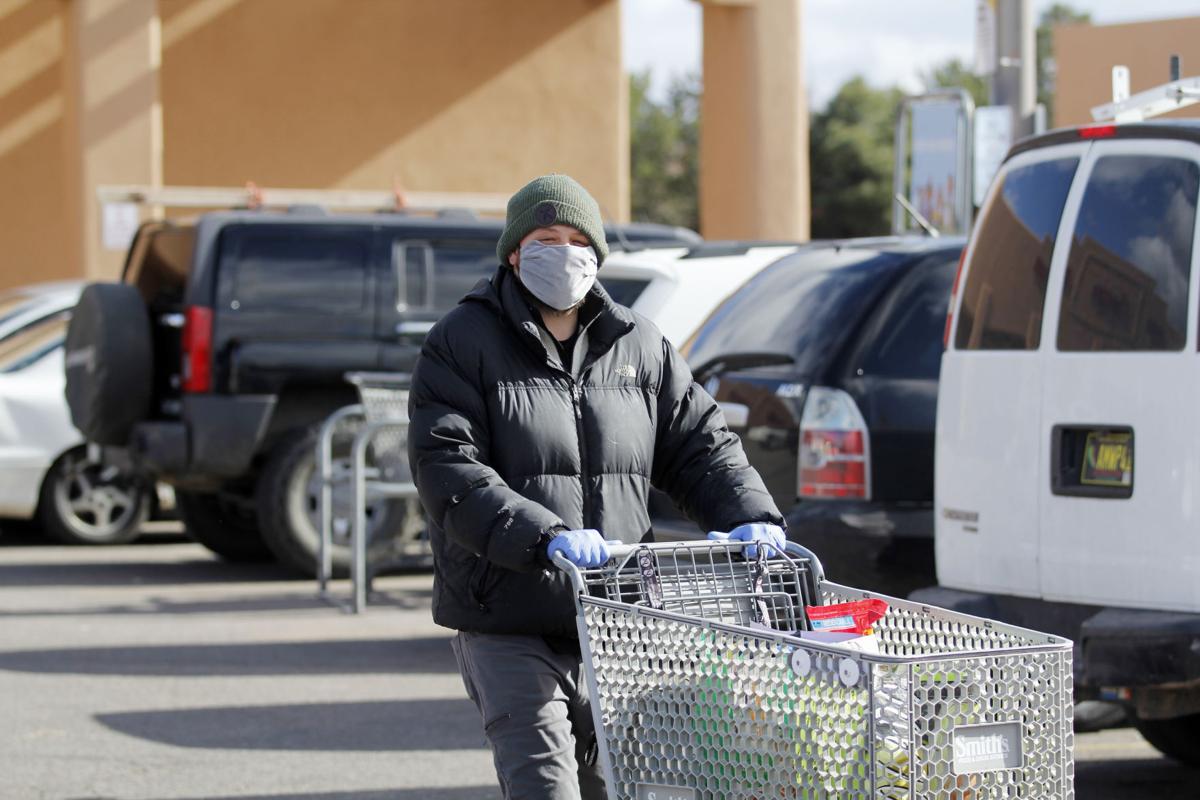 Santa Fe resident James Valdez wears a protective mask as he walks out with his groceries Thursday from Smith’s Food and Drug on Cerrillos Road. 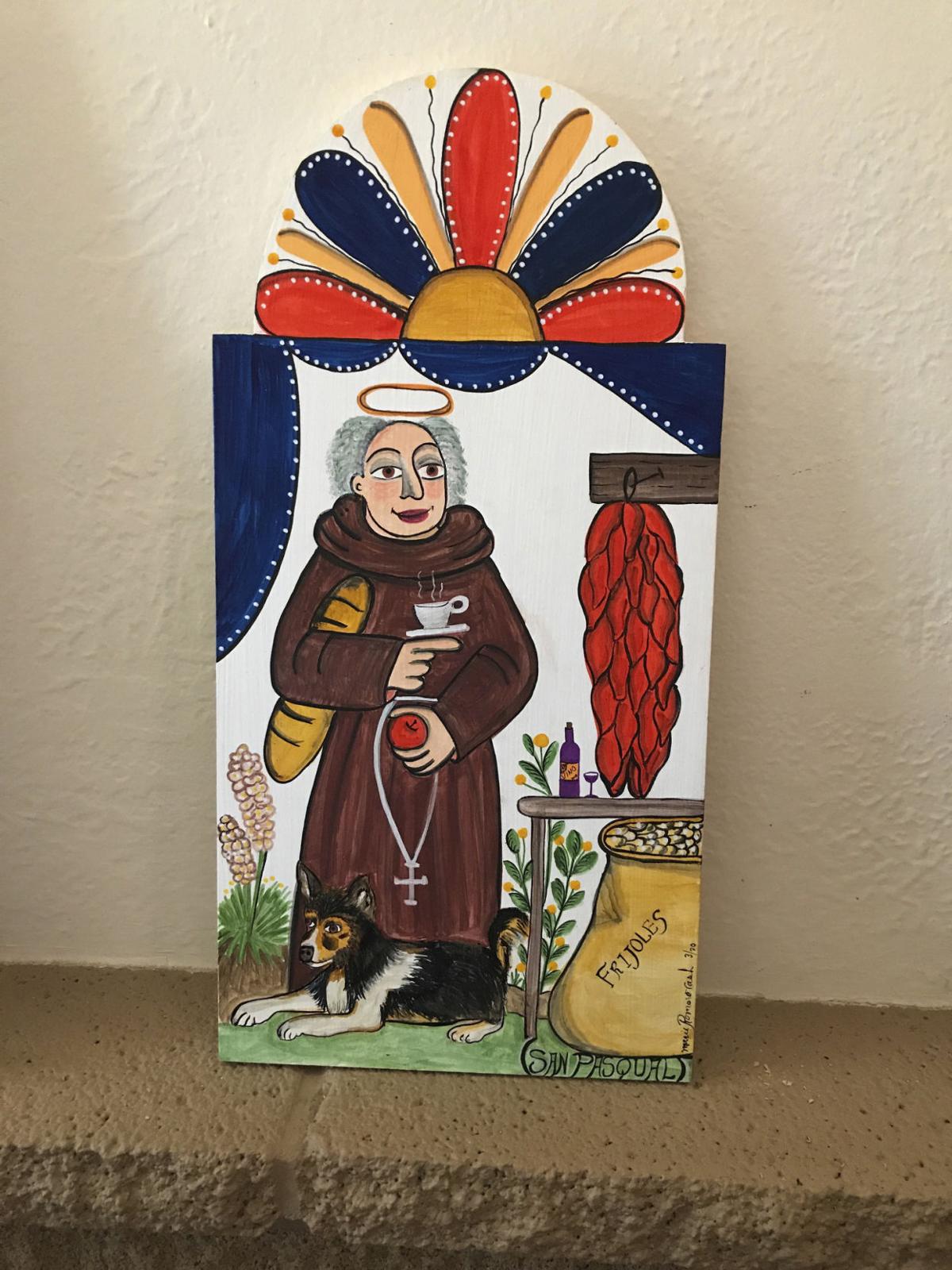 One of the retablos painted by Marie Romero Cash while in self-imposed isolation. Cash says she misses being able to just get up and go grab a coffee from her favorite coffee shops.

Wearing a protective mask, James Valdez of Santa Fe puts groceries in his vehicle Thursday outside Smith’s Food and Drug on Cerrillos Road.

Santa Fe resident James Valdez wears a protective mask as he walks out with his groceries Thursday from Smith’s Food and Drug on Cerrillos Road.

One of the retablos painted by Marie Romero Cash while in self-imposed isolation. Cash says she misses being able to just get up and go grab a coffee from her favorite coffee shops.

Anthony Baca’s son was tightly wrapped in a jacket and wearing a child-sized black face mask as the two headed to a Smith’s grocery store on a brisk Thursday afternoon.

As they walked toward the entrance, Baca told his son he was going to cook their food at home because he wants to keep their family safe by making sure they stay away from other people’s germs.

The topic of conversation.

A father newly out of work, shopping in the middle of the day.

As the COVID-19 crisis deepens, with more people jobless and fewer and fewer vestiges of a regular life apparent, Santa Fe residents continue to search for ways to stay clear of one another and settle into a new, uncomfortable normal.

For Baca, the coronavirus impact has been stunning: He lost his job this week at Jambo Café, closed after new restrictions placed on restaurants because of the outbreak.

Now, instead of rushing to work or school in the morning, his young family stays at home except for quick trips to the store. Baca said they play board games and bought Marvel vs. Capcom 3 for Xbox this week. He helps his son do math worksheets.

To stay busy, Baca and his wife clean and disinfect their home. She is five months pregnant. Baca said he’s trying to keep her as comfortable and calm as possible.

The isolation and changes in daily life are evident everywhere and affecting most everyone.

Christopher Pacheco of Santa Fe said he was an avid moviegoer and depends on his social life to help stave off depression. But now, his new routine is staying home, going to his job at Chik-fil-A, perhaps stopping by the store and heading back home again.

“It’s kind of sad, actually,” Pacheco said of the changes at work. “I was going into work; people were happy, eating out and enjoying their meal. Now, when I go in, the dining room is just closed. You can see the uncertainty on everyone’s faces.”

He said he lives with a roommate and, while they are supporting each other as best as they can, they are trying to stay in their separate rooms. On the upside, Pacheco said, he has plenty of time for his hobby of studying languages. He said he visits with a therapist over the phone.

For Anita Rivera, the routine is different — but absolutely necessary. She said she walks into her house after work each day and immediately goes into the shower. Then into a clean pair of clothes.

A respiratory therapist at a local hospital, Rivera has three kids — ages 19, 8 and 1 — and said she has to do everything she can to make certain they do not get sick.

She entered Smith’s carrying a purple box of diapers to exchange Thursday, and she said COVID-19 has totally changed life at home. When Rivera is not at work or running to the store, the family spends its day inside and breaks up the monotony by taking rides in the car and playing outside.

“Honestly, I’ve just been praying,” Rivera said. “That’s all you can do at this point.”

Her daughter is trying to keep some sort of normalcy in her life. Sierra Rivera, 19, said she’s keeping up with her friends and family on Facetime, doing homework and helping with the other kids.

“I’m always on the go, so it sucks being home,” Sierra Rivera said. “It does. But if it’s going to help people, I’ll do it.”

The sense of wanting to help others has kept Marie Romero Cash in self-isolation for more than a week.

Cash is an artist who has been selling her work for more than 45 years at Spanish Market. Typically, she starts making pieces for the event around this time of year.

Cash, 78, decided to go into a self-imposed isolation mostly due to her age, but also because she does not want to get anyone else sick.

“My son, of course, has encouraged it and also to try and do my part in order to keep, you know, from being infected and spreading it,” Cash said.

She has spent her days painting. With a laugh, she said she also cleaned out her refrigerator.

Being cooped up isn’t what’s hard, she said. It’s the inability to just get up and go.

“Well, I’m used to being home because I work in my studio, but … I miss going to Ecco for a coffee, but also Downtown Subscription [coffee shop] and also Dulce for a bran muffin,” she said.

She keeps herself calm by listening to meditation videos on YouTube and walking her dog.

But the stress of not knowing when she can end the self-isolation is the hardest thing.

“One can hope this will be over, but we don’t know,” Cash said. “That’s the most difficult part: the not knowing, the not being certain, that it is going to be over, that it is going to take a certain amount of time. So I plan on doing it as long as possible and continue to try to do things that help me along this path.”

The coronavirus outbreak has led many events to be canceled or rescheduled.

I went to Trader Joe's yesterday and they were only letting in so many people into the store at once. Seems like a good idea. Why don't the other stores try it?