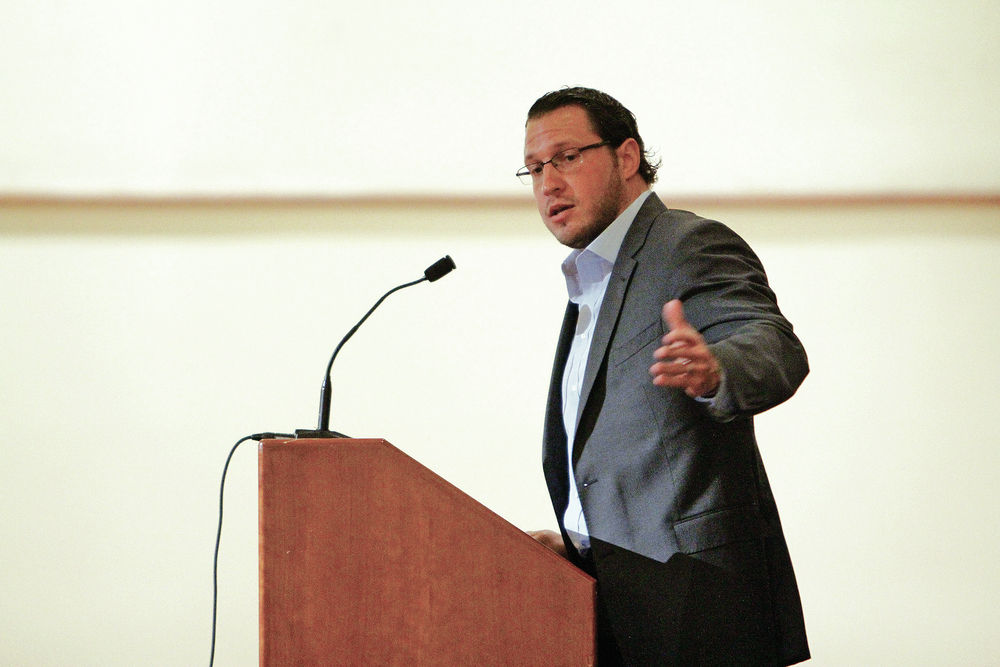 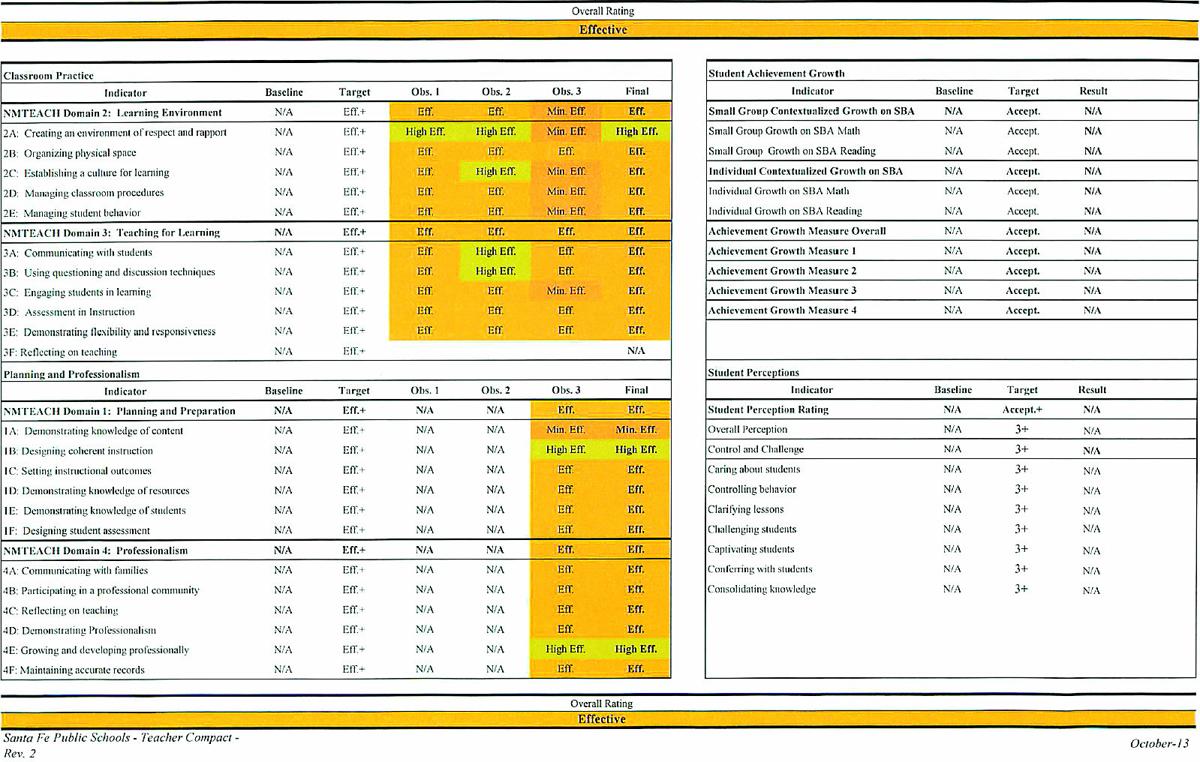 An excerpt from a teacher evaluation completed in May 2014.

An excerpt from a teacher evaluation completed in May 2014.

In one of the strongest challenges yet to the state’s new teacher evaluation system, Santa Fe Public Schools Superintendent Joel Boyd is asking state education officials to delay the use of standardized test scores as a component within that system until the state can figure out how to accurately measure that data.

The push for a delay, which Boyd detailed in an opinion piece published in Sunday’s New Mexican, represents a change of thinking for the superintendent, who was an early supporter of the evaluation system.

“I continue to believe that using student learning outcomes as part of the teacher evaluation system is essential,” Boyd said in an interview Sunday. “But it is critical that we get it right, and right now there are a number of questions that need to be resolved.”

Boyd’s request comes amid similar requests and questions regarding the state’s teacher evaluation system, especially as the state transitions from Standard Based Assessment, or SBA, tests to Common Core Partnerships for Assessment of Readiness for College and Careers, or PARCC, exams this year.

But Boyd, who leads one of the state’s largest school districts with more 14,000 students, is believed to be the first sitting superintendent to publicly challenge the evaluations — though over the past few months a few other superintendents have raised questions to the Legislative Education Study Committee about problems with collecting and measuring data.

Boyd questions whether the state’s data systems are capable of providing valid calculations at this time. And he wants to use more updated data used in evaluating teacher performance.

Boyd’s request is sure to meet resistance from the state’s Public Education Department. Larry Behrens, a spokesman for the the department, said in an email Sunday that because teachers are the most important factor in improving student achievement, “We can’t delay our students a quality education for a year. … We are committed to moving forward with teacher evaluations.”

Boyd said the fact that the test score data is at least a year old and goes back three years does not account for how teachers are doing in their current year. He said it is tough for principals to put teachers on professional development plans based on information that renders the evaluations “useless.”

For instance, updated Standard Based Assessment data for school districts is not released until midsummer, so evaluations are based on data from the previous three years. Boyd said one possible approach is to evaluate teachers using that updated data at the beginning of the school year, which will help principals lay out goals for improvement in the coming year.

But given that teacher and principal contracts are renewed by July 1 every year, that approach would require cooperation from teachers unions and might pose other challenges, he said.

This year, at least six of the district’s teachers were rated ineffective even though their principals found them effective during classroom observations. Boyd said it is also possible that a reverse situation may apply.

Ellen Bernstein, president of the Albuquerque Teachers Federation, said by phone Sunday that while she agrees the data analysis system is flawed, she disagrees with Boyd when it comes to using test results at all. She said new research shows that teacher effectiveness can not be tied to test scores.

“What Boyd is saying is we need to keep doing this because this is obviously the way we need to judge teachers’ effectiveness; we just need better metrics,” she said. “I say that is not true. The metrics are bad.”

In New Mexico, 50 percent of a teacher’s evaluation is based on student growth achievement measures.

“Whether that’s our problem or the [Public Education Department’s] problem, I don’t know,” Parks said. “The bottom line is we need to get it right because whenever you talk about evaluations of staff you need to make sure that your numbers are accurate.”

He said his district is still working to validate revised teacher evaluation figures from the Public Education Department.

The U.S. Department of Education recently gave states the right to ask for a one-year delay in using test scores as part of teacher evaluations.

But last week, Education Week quoted New Mexico’s Education Secretary-designate Hanna Skandera as saying the state will not delay because it would break the state’s commitment in its request for a waiver of No Child Left Behind guidelines. Those initial waiver requirements include assurances from states that they will create teacher evaluation plans heavily based on student test scores.

According to the Education Week article, 17 states said they likely would ask for the one-year delay offered by the U.S. Department of Education. At least 11 states, including New Mexico, said they would not. About 35 states and the District of Columbia utilize student test score data in their teacher evaluation systems.

Many New Mexico educators have criticized the state’s new teacher evaluation system, saying it is unfair to use test score results for 50 percent of a teacher’s grade. Some have said the complex measurements used within the evaluation are confusing.

The Public Education Department counters that the new evaluation system is not only an improvement over the previous three-tier licensure system — in which teachers were simply rated as to whether they met competency standards or not — but gives a clearer picture of how teachers are impacting student achievement. And by requiring two or three lengthy classroom observations, it also forces principals to watch teachers at work and give more direct feedback.

Many educators have praised the observation portion of the review, although some have asked that it be weighed more heavily than test scores. Parks said he would like the observations to account for 50 percent of the overall evaluation.

In addition, a mix-up in collecting and analyzing data — in part due to districts initially supplying inaccurate, incomplete or late data, according to the Public Education Department — caused problems this year. In May, the state said 76 percent of teachers were rated “effective” or better in the five-point rating system. After further review of more data, the state said that number was closer to 73 percent.

In Santa Fe, the Public Education Department said just under 50 percent of Santa Fe Public Schools’ teachers rated “effective” or better. But the district, arguing that the department was wrong, spent additional time reviewing those figures and calculated that number as closer to 67 percent — a figure it stands by after presenting a follow-up report to its school board last Tuesday.

In May of this year, the Educational Evaluation and Policy Analysis journal of the American Educational Research Association published a report that said there is little or no connection between good teachers and the evaluations they receive based on student test score results. And W. James Popham, a professor emeritus at the Graduate School of Education and Information Studies at the University of California, just published an article in September’s Phi Delta Kappan magazine saying the same thing.

In 2012, the U.S. Department of Education granted New Mexico a waiver from No Child Left Behind mandates, allowing the state to leverage about $10 million in federal funding if it agreed to the terms of the waiver — including creating a teacher evaluation system that holds educators accountable for achievement.

Commentary: We need to get teacher evaluations right

Every year on the first two days of school, I visit every school in the district to welcome …

2011: The Legislature considers — but does not approve — implementation of a new system for the evaluation of teachers and principals.

April 2012: Gov. Susana Martinez uses her executive power to direct the Public Education Department to create a new teacher and principal evaluation system. That plan, which rates teachers as exemplary, highly effective, effective, minimally effective or ineffective and heavily relies on student test score data, was adopted in August 2012 with implementation slated for the 2013-14 school year.

2012-13: Statewide, 68 schools (none in the Santa Fe district) volunteer to take part in a one-year evaluation pilot program to work out kinks.

Summer 2013: Districts either adopt the state’s evaluation process or submit slight variations on it with limited flexibility. Santa Fe Public Schools, one of the districts to submit its own plan, still must adhere to the requirement that 50 percent of a teacher’s evaluation be based on student test scores.

May 2014: The Public Education Department reports that 76 percent of the state’s teachers have been rated effective or better.

August 2014: The Public Education Department revises those initial figures, citing incomplete data, and reports that 73 percent of the state’s teachers have been rated effective or better.

What Ellen Bernstein said. And what research (thanks for citing some here)--and common sense tell us--evaluating teachers based on student tests that NO ONE sees; not teachers, not administrators, not school board members, not parents--NO ONE, serves no one's interests but the billions-per-year-testing industry. Evaluating teachers based on student test results is complete nonsense dreamed up by politicians like Boyd and their testing industry cronies. Our kids are being tested to death. Parents can do something positive: opt your child out of all standardized, state and district required testing. Boyd is just getting his face in the news because he wants Skandera's job. He'd be even worse than she is.

Why are the parents never asked how we would evaluate the teachers? My daughter is in 8th grade and through out the years, she has had some excellent teachers and some horrible teachers. The schools always say they want more parent involvement, but when you do it, or start asking questions, and try to advocate for your child, you are percieved as a difficult parent. I see what she is and isn't learning in school. I see through her how a teachers different teaching style helps or hurts my daughters education and overall self esteem. Just because they have been a teacher for so many years doesn't mean their method of teaching is superior to someone who is just starting out. I really wish the Dr. Boyd, the principals & teachers would listen to the parents more than rely on test scores & classroom evaluations. My daughter tells me when there is a classroom evaluation the teachers act completely different than they do on a normal school day. How is that acceptable? The students & parents have more of a say in how a teacher is performing. According to the graph above, only 5% goes to student evaluations and 0% is from the parents. This has to change.

Why does this site allowed spam ads like this?

I don’t know, maybe it’s just me. But I for one wish Dr. Boyd would spend infinitely more time ensuring our kids were learning and mastering the basic fundamentals of reading, writing and arithmetic instead of quibbling about the methodology used in collecting and measuring data… Bottom line, if the kids actually know the material, they will pass the test no matter whose evaluation system you use.

Good to see Dr. Boyd in the news again.