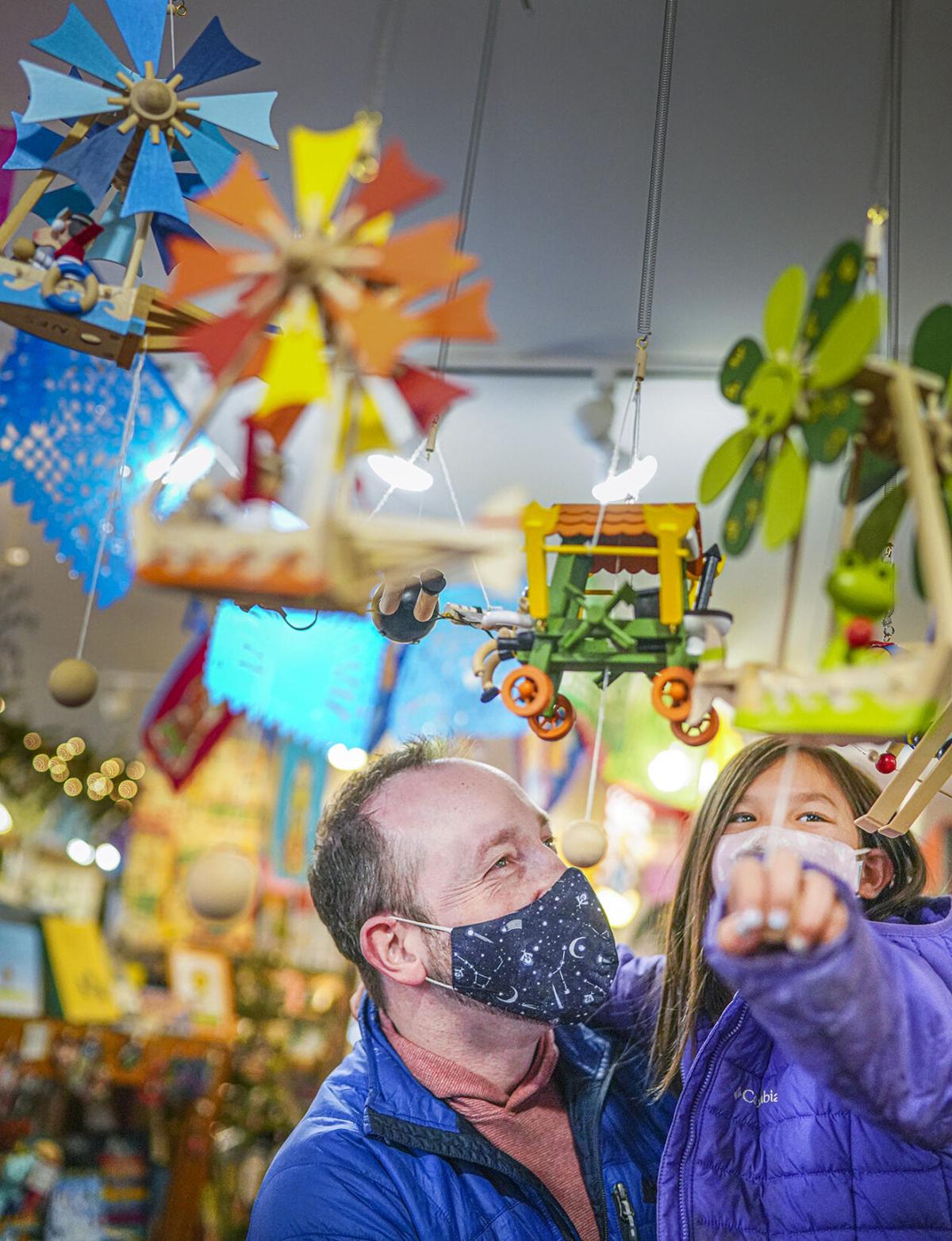 Josh McIntyre and his daughter Inara, visiting from Los Angeles, play with the wooden mobiles hanging from the ceiling at Doodlet’s on Wednesday afternoon. Major retailers are planning for a big Friday turnout, but shoppers who want to avoid crowds can shop on Small Business Saturday, when the state of New Mexico is offering a gross receipts tax holiday at small businesses. 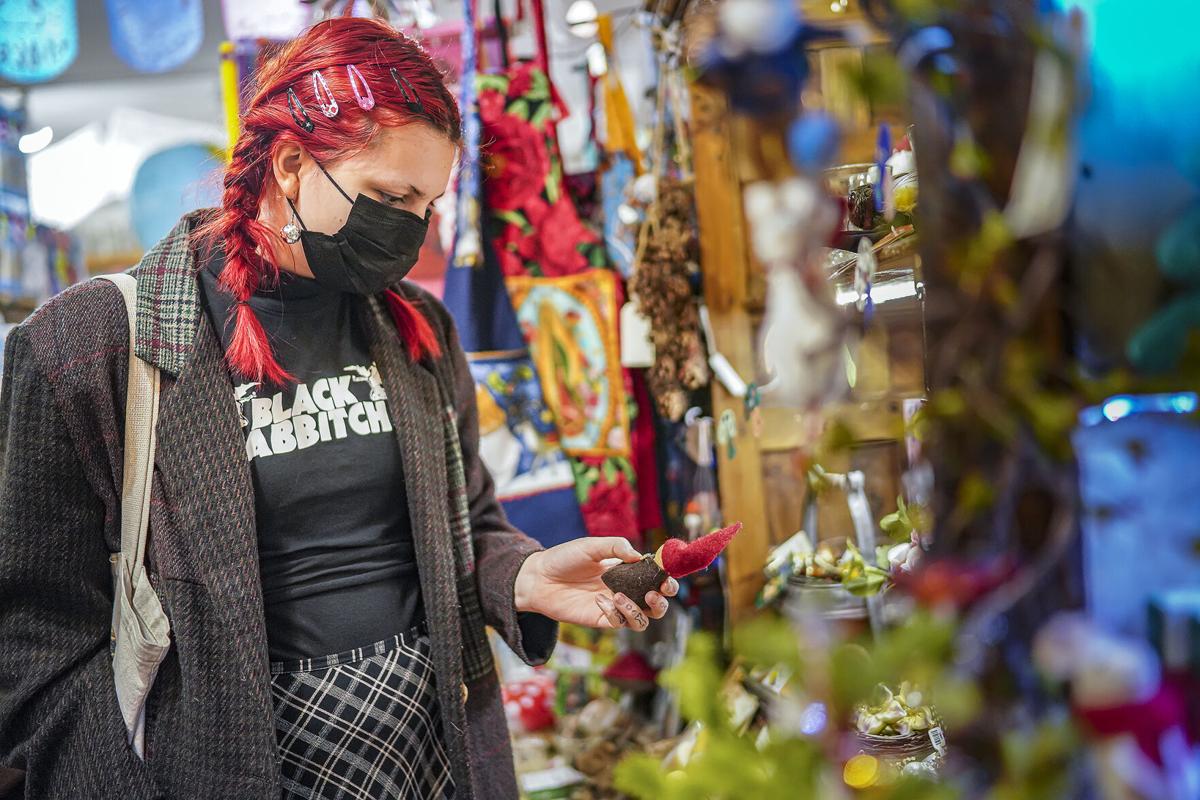 Avery Evans, of Austin, Texas, browses through trinkets at Doodlet’s on Wednesday afternoon.

Josh McIntyre and his daughter Inara, visiting from Los Angeles, play with the wooden mobiles hanging from the ceiling at Doodlet’s on Wednesday afternoon. Major retailers are planning for a big Friday turnout, but shoppers who want to avoid crowds can shop on Small Business Saturday, when the state of New Mexico is offering a gross receipts tax holiday at small businesses.

Avery Evans, of Austin, Texas, browses through trinkets at Doodlet’s on Wednesday afternoon.

Has Black Friday become an afterthought?

Remember a few years back, when store openings came earlier and earlier, first at 6 a.m., then 5 a.m. and then enough stores went right for midnight and some, like Target, even backed into Thanksgiving?

And lines of bundled-up shoppers spread far from the store doors to be first in the store to get an 86-inch TV or sprint into Toys R Us?

“We don’t know the answer,” said Bryan Wachter, senior vice president of government and public affairs at the Retail Association of Nevada, which oversees the New Mexico Retailers Association. “There are so many factors. We had more shoppers in October than we’ve had in past Octobers. In 2020, we actively discouraged people to postpone Black Friday.”

If Black Friday store opening times are any indication, there won’t be a need to lose much sleep to be first in the store.

Walmart, JCPenney, Kohl’s and Best Buy maintained a sense of nostalgia with 5 a.m. openings Friday, with Bed Bath & Beyond choosing 6 a.m. But Target abandoned a Thanksgiving opening during the pandemic last year and now opts for a very tame 7 a.m., along with Michaels and HomeGoods.

“Our workers have really been working hard during the pandemic,” said Katherine Cullen, senior director of industry and consumer insights at the National Retail Federation. “It’s a chance for workers to take some time off.”

Black Friday pretty much has transformed into Black November, even Black Halloween.

Halloween was memorable at Santa Fe Place and for Antonio Guerrero, whose first day on the job as the mall’s marketing manager was Halloween.

“We had so many people there we ran out of candy in about an hour and a half,” Guerrero said. “We are expecting Black Friday to follow the same suit. We will have live music from 11 a.m. to 4 p.m. and two radio remotes, and we are giving away a $1,000 shopping spree.”

Some Santa Fe shoppers might not leave the house at all on Black Friday.

Ana Garcia of Santa Fe has not ventured out for Black Friday for about three years.

Marcella Montoya of Santa Fe has not gone to stores on Black Friday for six years — with one exception.

“One year we wanted a TV,” Montoya said. “It was a mess. I don’t go out Black Friday. I don’t like to deal with the crowd.”

James Butler of Peña Blanca estimated it might be eight years since he did Black Friday in person.

“I hate the crowds,” Russell said. “Nothing they do with all the marketing can get me in there.”

Shoppers who want to avoid crowds can shop on Small Business Saturday, during which the state of New Mexico is offering a gross receipts tax holiday all day on a broad array of products at small businesses with no more than 10 employees. This includes clothing, sporting goods, grooming items, toys and home electronics; visit bit.ly/3DPswMl for more information.

Even with the proliferation of online shopping, the National Retail Federation still predicts 64 percent of those who shop on Black Friday will do so in person.

The International Council of Shopping Centers, in its holiday shopping intentions survey, discovered e-commerce could see a 13 percent increase over last year — when online shopping was paramount, especially in New Mexico, which had 25 percent occupancy restrictions and many stores were closed.

Online shopping was here to stay before the pandemic and COVID-19 fortified e-commerce.

The wild card is whether there will be Fritos on the shelf and just how the supply chain challenges of recent months will affect whatever it is you want — in person or online. Deloitte, the giant accounting and professional services network, in a holiday survey of more than 4,000 consumers, found that 68 percent shopped before Thanksgiving because half of respondents were concerned they would find empty shelves deeper into the season.

“With supply chain problems, people are going to stores because it may be sold out online,” Cullen said. “It’s pretty easy to determine if an item is in a store or online.”

But the National Retail Federation and the International Council of Shopping Centers are bullish about in-store Black Friday shopping.

“People are going to stores for gifts they like to touch and feel in person: apparel, beauty items, fragrances,” Cullen said.