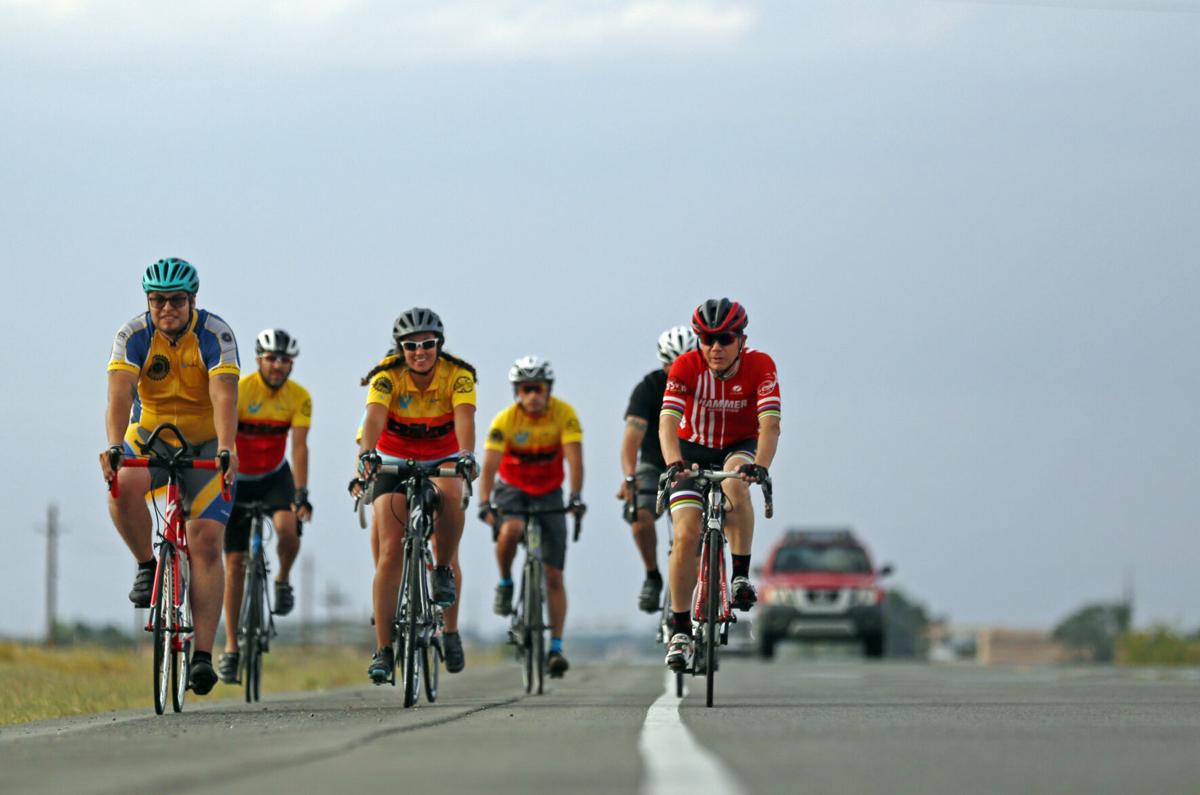 Gabriel Aragon, front left, Michaelann Perea, front center, and Kale Reeder, front right, ride on N.M. 14 on Tuesday. Some 40 cyclists, including nine from Santa Fe, will take off Monday for a five-day ride across the state from Aztec in the northwest to Carlsbad in the southeast to raise funds to build water wells on the Navajo Nation. Local pastor Eric Montoya is leading the initiative. 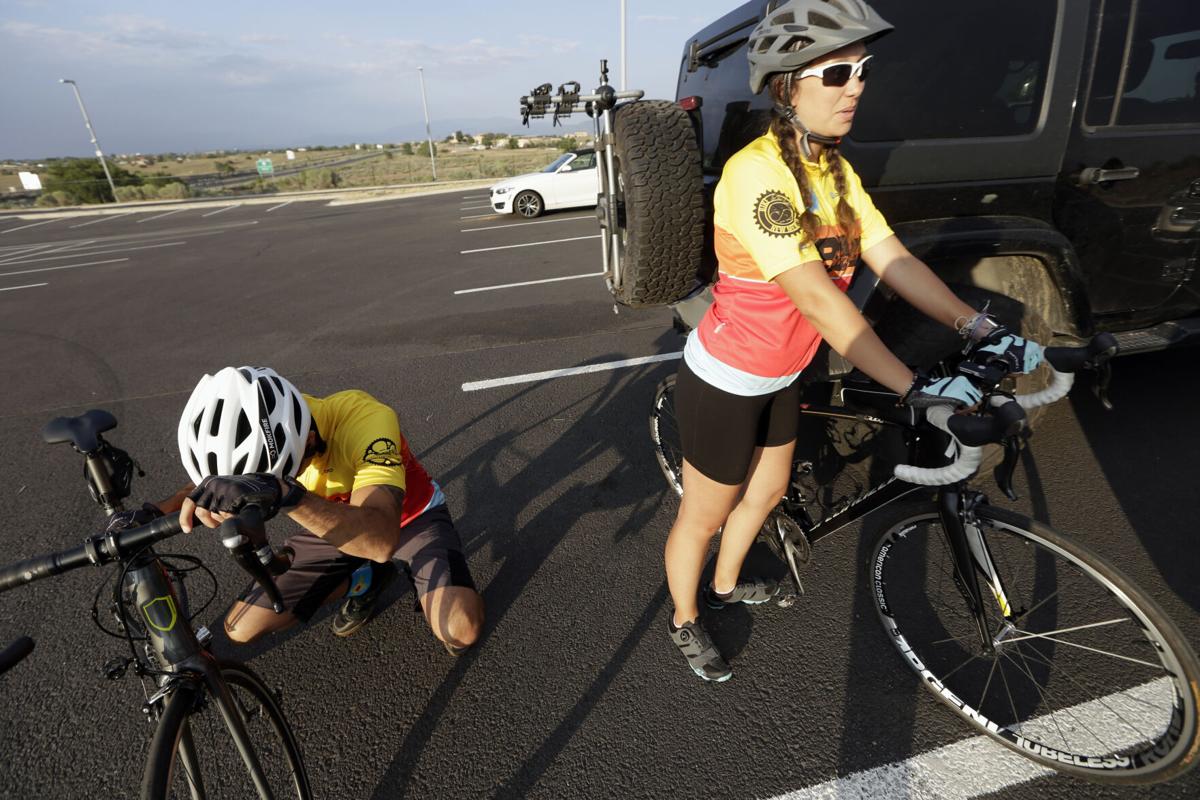 Israel Perea, left, stretches next to his wife, Michaelann Perea, at the N.M. 599 Rail Runner Express station on Tuesday.

Gabriel Aragon, front left, Michaelann Perea, front center, and Kale Reeder, front right, ride on N.M. 14 on Tuesday. Some 40 cyclists, including nine from Santa Fe, will take off Monday for a five-day ride across the state from Aztec in the northwest to Carlsbad in the southeast to raise funds to build water wells on the Navajo Nation. Local pastor Eric Montoya is leading the initiative.

Israel Perea, left, stretches next to his wife, Michaelann Perea, at the N.M. 599 Rail Runner Express station on Tuesday.

After pedaling more than 499 miles, it was always the last hill near the finish line that gave Gabriel Aragon the most trouble.

He’s completed the 500-mile annual Bike for the Light cycling event three times. He plans to do it again next week as one of nearly 40 cyclists who will ride for a cause.

Their goal is to raise $250,000 to help build wells on the Navajo Nation. They’re hoping to get sponsors for the ride and complete a five-day trek across New Mexico, from Aztec up north to the Texas border down south near Carlsbad.

For Aragon, a 33-year-old Santa Fean who works for the state, the physical challenge is worth the payoff.

“I can pedal a bike and raise money for something that’s good,” he said. “I can make a difference.”

The Rev. Eric Montoya of The Grove church in Santa Fe joined with other faith leaders across the state to initiate the first Bike for the Light in 2012, when fewer than 10 riders took part, seven of whom finished the entire ride.

The group raised $10,000 to buy a vehicle for the Convoy of Hope, a Missouri-based national nonprofit that provides food assistance for children and disaster relief, among other charitable aid.

Since then the ride has grown in both the number of participants — 37 this year — and fundraising, bringing in about $200,000 last year, 41-year-old Montoya said. Riders can choose whether to participate for just one day and 100 miles or up to five days and 500 miles.

The cyclists are accompanied by vehicles carrying water, food, first-aid supplies and a ride home.

Montoya said the first day is always the hardest as the cyclists, riding two-by-two as often as possible, bike the Continental Divide. Aragon agrees, though he said the last 10 miles — that hill near the end — are difficult too.

Michaelann Perea, 34, who works for First National 1870, found the last day the toughest in 2020 — the first time she and her husband, Israel Perea, rode the course. She plans to ride again this year.

“It’s Day Five when the tears set in, the prayers come and you dig deeply into the support of the people around you and pray like heck you can make it through,” she said.

She and her husband found the coronavirus pandemic, which led to so many restrictions, offered an opportunity to get involved because they had plenty of time to train for the grueling event.

“Little did we know what we were getting into,” she said.

On the ride’s second day last year, a freak snowstorm in the Albuquerque area presented an unexpected roadblock. Then it was rain, sleet and cold winds for a while, she said. “Thank goodness no hail.”

She and Aragon both said one of the best parts of participating is the connection they make with other riders.

Aragon said the lengthy journey is also a time to connect with God.

“You can really bond in a different way when you ride through his creation,” Aragon said. “It is a really good experience to ride and think about everything going on in 100 miles a day. It’s a lot of miles to reflect and grow.”

Montoya said in his experiences on the ride — he’s done them all — he hears a similar message from other riders after they reach the Texas border: “I wasn’t sure I could do this. There’s more in me than I ever thought there was.”

He said that leads people to look for ways to push themselves in other areas of their lives.

Physically, it remains a challenge, he said. “You’re depleted of everything in the end.”

He added, “I’ll rest for two days after. And you’re so hungry your body wants to eat everything for two to three days. It speaks to how much you put out to achieve this goal of helping others.”

To donate to this year's Bike for the Light event, a 500-mile charity ride across New Mexico, or learn more about how to participate in next year's event, visit bikeforthelight.org.

GOD BLESS YOU GUYS ON YOUR LONG DISTANCE RIDE. AS A BIKER MYSELF AND HAVING BEEN ON MUCH SHORTER RIDES KNOW A LITTLE ABOUT THE CHALLENGES A LONG RIDE PROVIDES AND THE MENTAL TOUGHNESS NEEDED TO FACT UP TO IT AND WILL BE PRAYING FOR YOU AS WELL.

Wow. An extremely impressive effort for an urgent and much-needed cause.

May Rev. Montoya, Michaelann, Gabriel, Kale and the entire congregation be empowered, encouraged and emboldened - in The Most Holy and Sacred Name of The Christ King Yeshua, I pray!

Thank you to everyone who is participating in this effort. So wonderful to see our community come together for great cause. To the cyclists, you are strong and amazing. [thumbup]