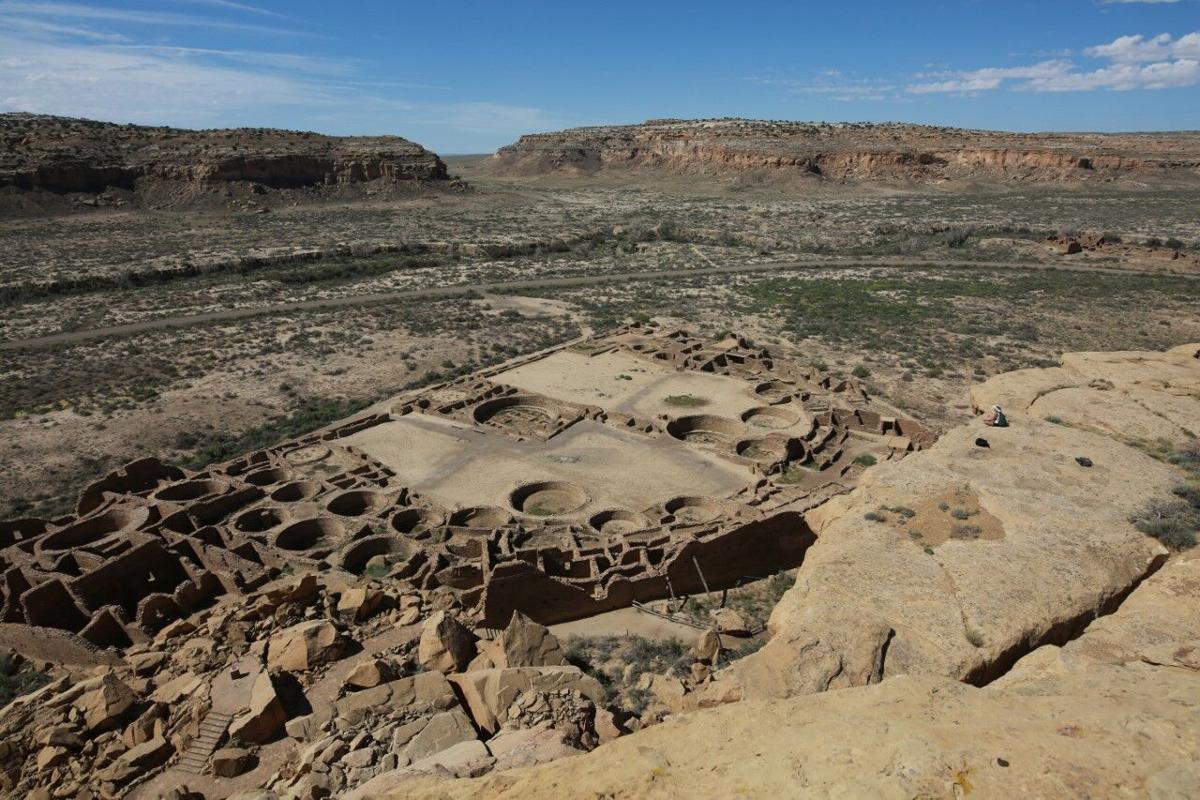 A view of Chaco Culture National Historical Park. Tribal leaders, environmentalists, archaeologists and most of the state’s congressional delegates applauded Biden’s plan. Read about the president ordering agencies to combat criminal activity on Native land on A-6. 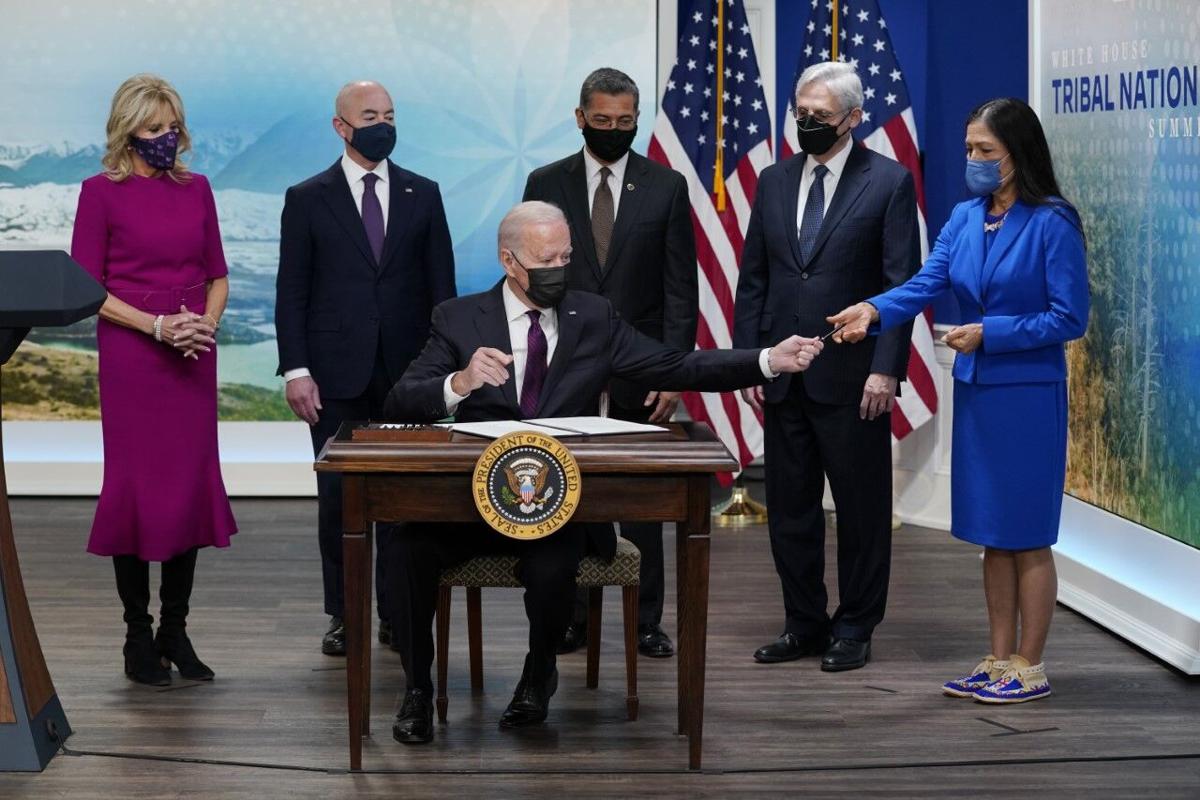 A view of Chaco Culture National Historical Park. Tribal leaders, environmentalists, archaeologists and most of the state’s congressional delegates applauded Biden’s plan. Read about the president ordering agencies to combat criminal activity on Native land on A-6.

The Biden administration announced a much-awaited move toward barring federal oil and gas leasing in a 10-mile zone around the Chaco Culture National Historical Park, stepping into a decades-long tug of war between the region’s economic interests and tribal heritage.

New oil and gas leasing will be halted for two years there while the Interior Department looks to withdraw federal land from development — such as new wells, pipelines and roads — for 20 years within this zone.

President Joe Biden is expected to discuss more details about protecting Chaco, a World Heritage site, during the two-day Tribal Nations Summit, which is scheduled to run through Tuesday.

The restrictions won’t apply to state or private lands, including those Native Americans came to own through a 19th-century law, which sought to break up tribal lands into smaller pieces by granting parcels to members who became known as allottees.

Tribal leaders, environmentalists, archaeologists and most of the state’s congressional delegates applauded Biden’s plans, saying the area contains myriad Indigenous sites that should be preserved.

“I’m grateful,” Acoma Pueblo Gov. Brian Vallo said. “The cultural landscape of Chaco is just so significant to the continued practice of our Indigenous religion and way of life here in Acoma. The protection of this landscape is so critical to the protection of our culture.”

One archaeologist said there are at least 4,000 documented Indigenous sites within the buffer zone that will receive much stronger protection under this action than what federal agencies such as the Bureau of Land Management normally provide.

“This protection, while it’s not completely permanent, is huge,” said Paul Reed of Archaeology Southwest, based in Tucson, Ariz. “Keeping oil and gas out of there, at least on BLM surface lands, is going to give myself and many other archaeologists and tribal members a chance to experience those places without the threat of … development.”

Reed said the policy will be a sturdy stopgap while lawmakers work to revive legislation to create a permanent 10-mile buffer a future administration can’t reduce or scrap.

Reed was referring to a bill the U.S. House passed in 2020 but later stalled in the Senate. Lawmakers are now talking with opponents and advocates of the bill with the aim of reintroducing a version that has greater support.

Creating a 10-mile swath around Chaco has drawn criticism not only from the oil and gas industry but from some Navajo Nation leaders who say the no-development zone will choke off too much drilling.

In January 2020, the Navajo Nation Tribal Council voted 18-1 to demand Congress cut the proposed 10-mile buffer zone in half, saying it would crimp a resource vital to a people struggling with poverty and unemployment.

Although the buffer wouldn’t directly affect tribal allottees, some feel wedging no-drill federal lands against their parcels could interfere with their operations and lower their property values, the Associated Press reported.

Fossil fuel industry groups called the buffer an unnecessary infringement. In an email, the head of the Independent Petroleum Association of New Mexico argued responsible oil and gas development posed no threats to the already protected sites.

“A 10-mile buffer is an overreach of federal authority, is arbitrary, and is not based in any science other than in political science,” wrote Jim Winchester, the group’s executive director.

Operators and mineral rights holders — including several Navajo allottees — have worked to reach a reasonable, science-based understanding about how to safeguard the sacred sites, Winchester wrote.

“Arbitrary limits on development in the region will only disrupt the largest and most successful part of New Mexico’s economy and will rob local communities of jobs and economic growth opportunities,” Robert McEntyre, spokesman for the New Mexico Oil & Gas Association, wrote in an email.

McEntyre added he hoped future discussions between the Biden administration and the industry can yield policies that are rooted in science.

But advocates contend past policies put extraction above cultural preservation, and that this buffer could lay the groundwork for similar restrictions on a wider scale.

These actions, coming under Interior Secretary Deb Haaland, the first Native American woman to head the agency, are significant because it speaks to the Indigenous perspective of land stewardship, Bernal said.

A Navajo leader who supports the buffer zone agreed it’s a big step that was many years in the making.

“We’ve been at this a long time,” said Daniel Tso, a Navajo Nation Council delegate who chairs its Health, Education and Human Services committee.

Creating the 10-mile zone around Chaco is essential now that the industry is doing so much horizontal drilling, which involves hydraulic fracturing or fracking, Tso said.

Tso said he opposed last year’s House bill for Chaco because it didn’t go far enough in protecting the landscape. He would like to see safeguards extended for 30 or more miles from the park area, both to preserve cultural sites and to prevent the land and water from being polluted, he said.

“Our land — Mother Earth — one part of it being attacked is an attack to all of Mother Earth,” Tso said.

I think the Navajo Nation's position on this might surprise some people. But, if I'm not mistaken, the Navajo are not descendants of the Ancestral Puebloan people. Given the poverty so widespread on the Navajo Nation, I can see their point of view. But, it's too bad. The oil and gas industry is too greedy and voracious to elicit any sympathy from me.

A temporary, uncertain, small radius exclusion is ridiculous. The real solution is to buy all the mineral rights from all the parties within a much larger radius. It would not cost that much, compared to the massive spending the government is doing for lesser causes, and would protect it in perpetuity. Why are they ignoring the simplest and cheapest solution?

It is a valid question.

It's about time that so many of the immoral atrocities of the Trumpf regime be repaired!!

I agree with your statement, Carolyn, but in this case Chaco Canyon has been under attack since long before the Monster of Mar-a-Lago showed up on the scene.

And look how your guy is performing, he goes in his pants when he meets the royals. I love the inflation, don't you? Do you also like socialism? Your kids, and grandchildren will suffer.

Be prepared to hear how preserving this amazing archeological site will destroy the oil business. And 3. . 2. . 1 . .

And they'll say that as if it were a bad thing.