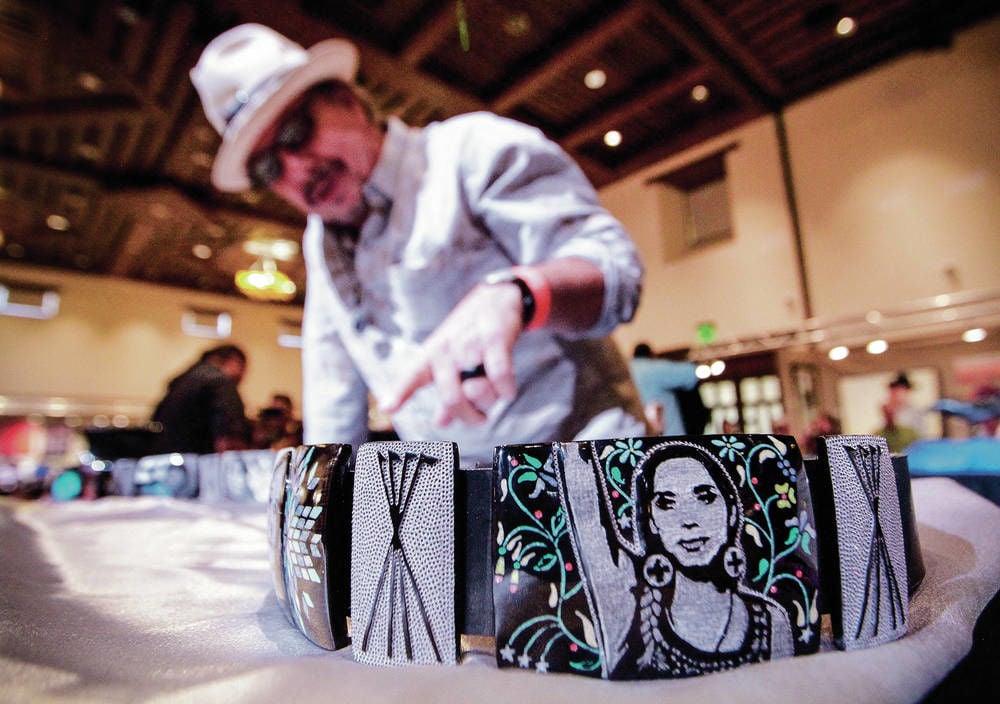 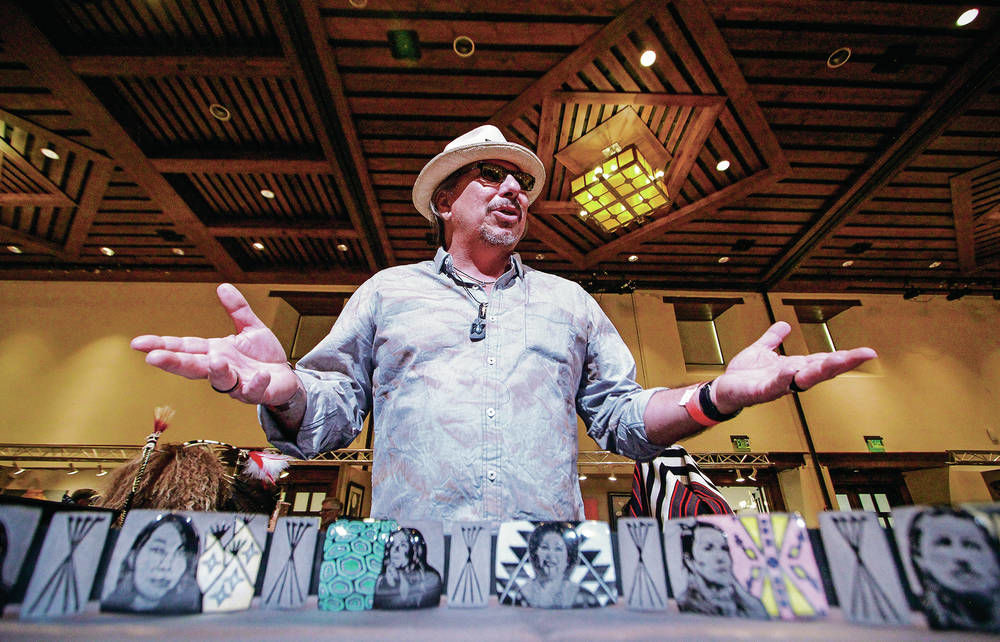 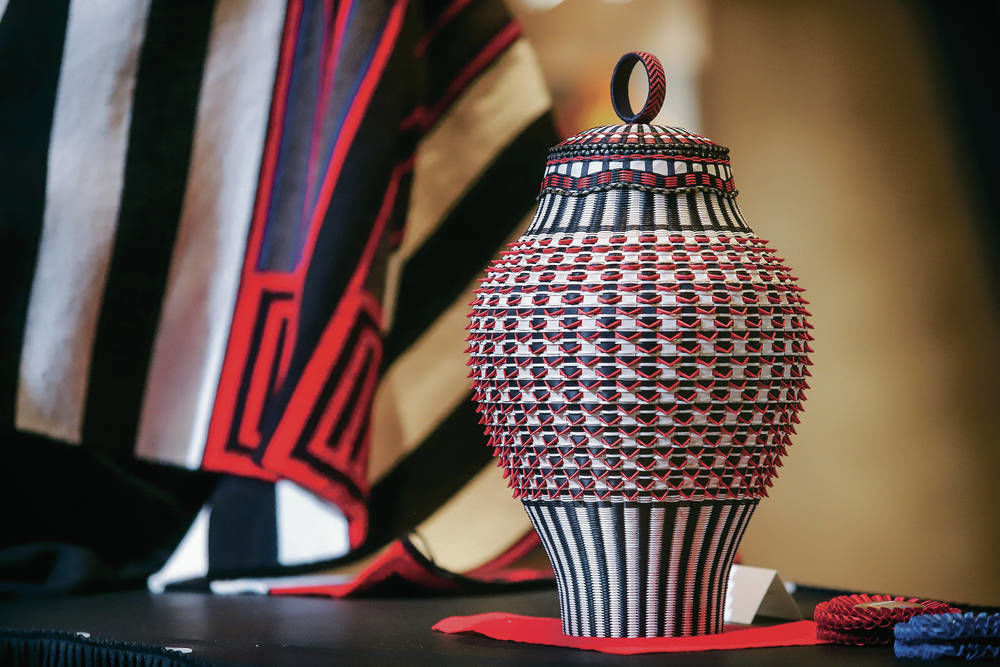 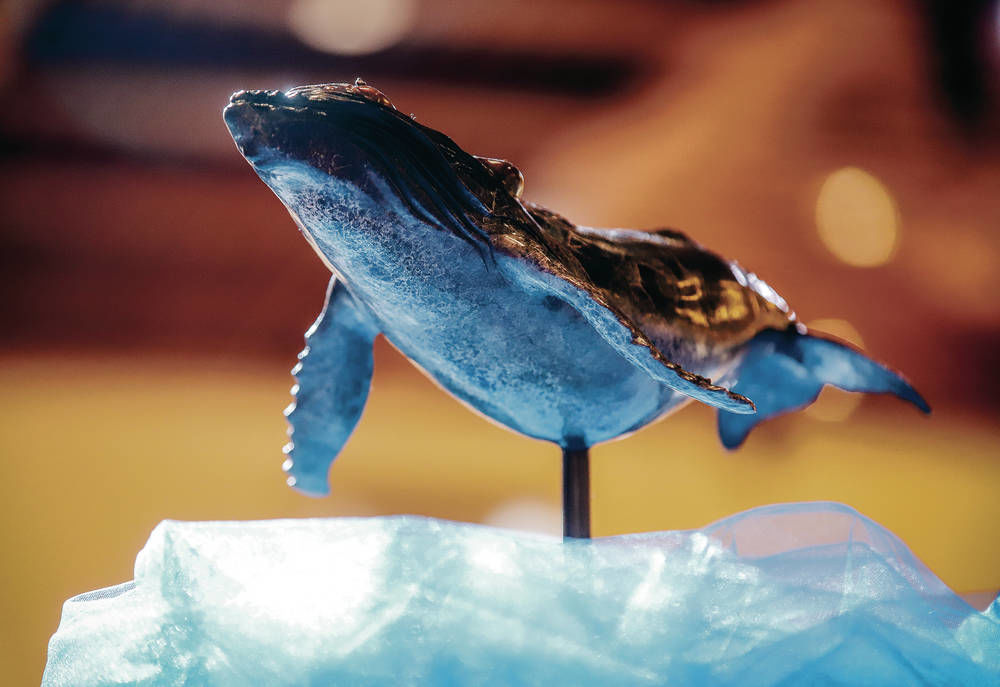 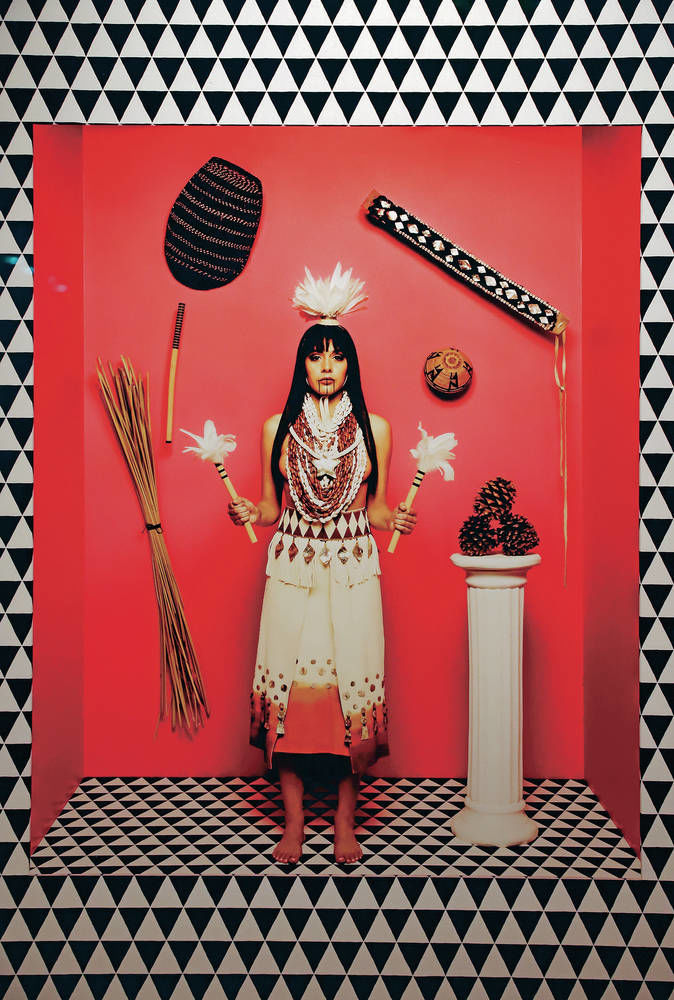 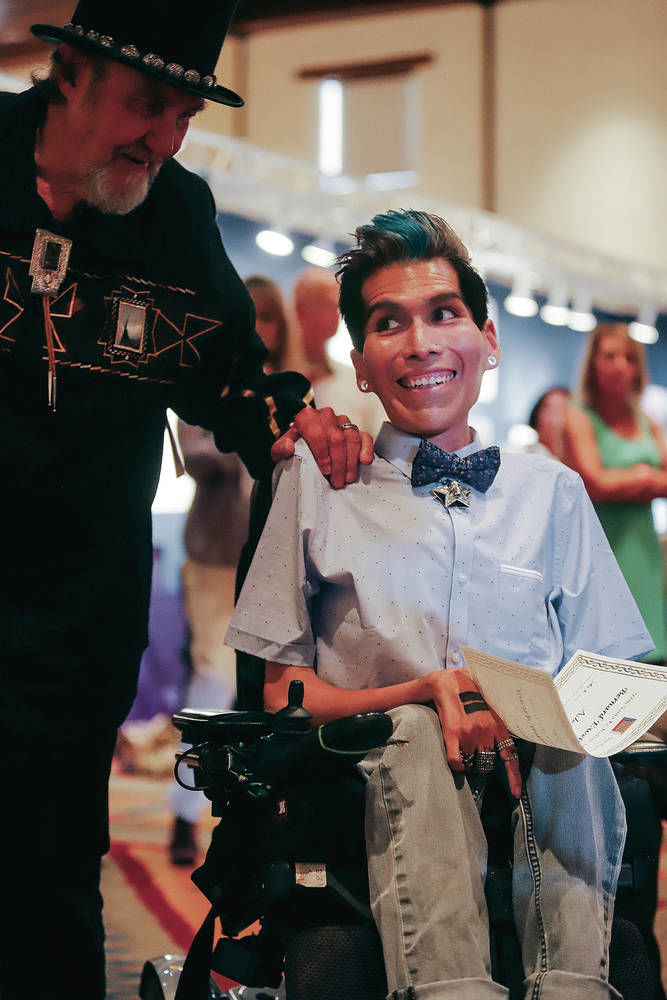 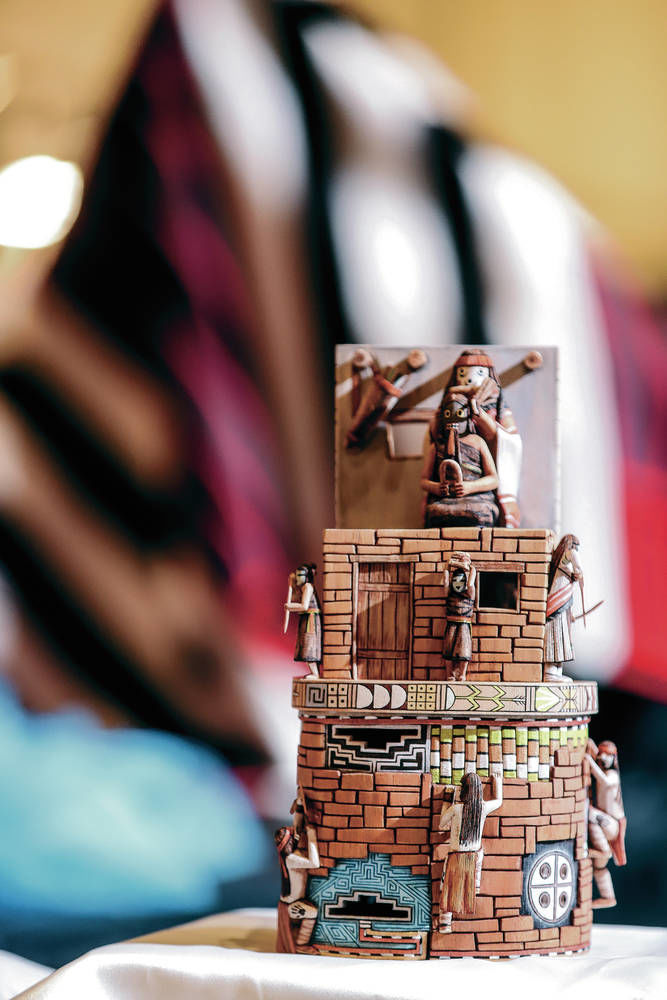 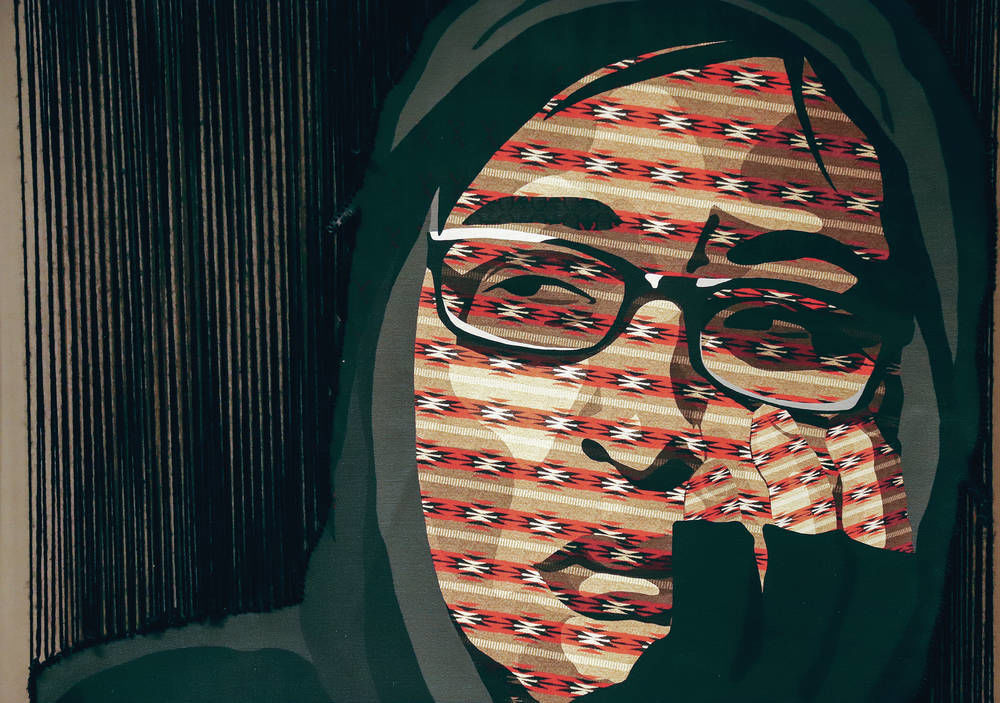 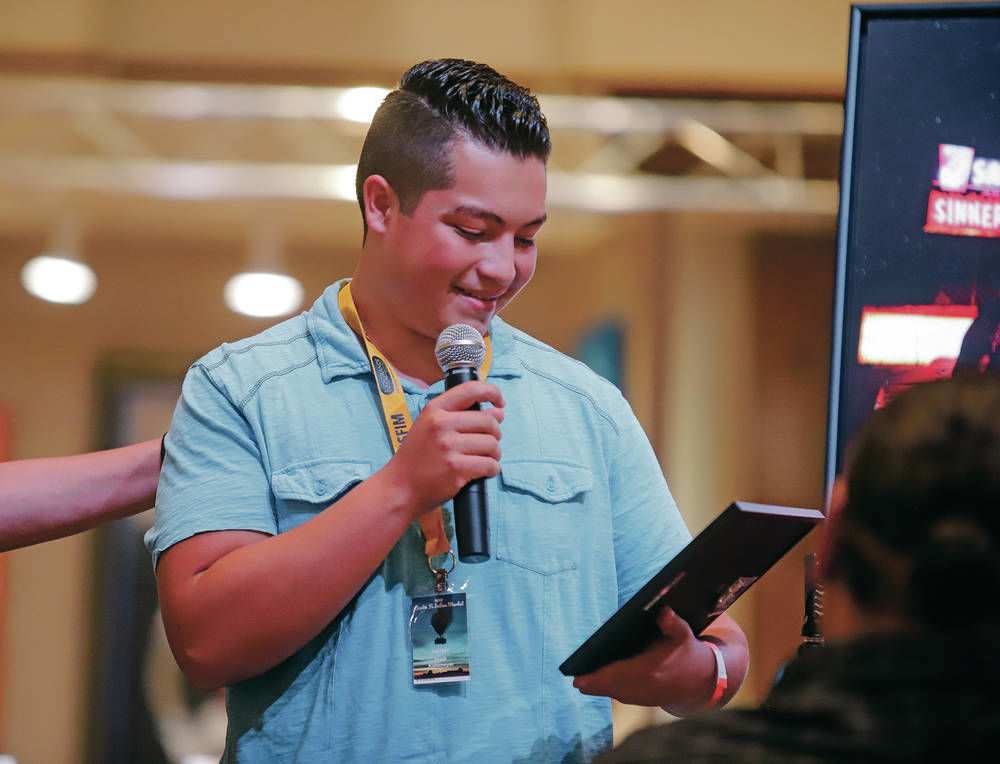 Isaak Kohlmeyer of Jemez Pueblo smiles Friday while looking down at his award in the youth category at the the 97th annual Santa Fe Indian Market awards presentation. Gabriela Campos/The New Mexican 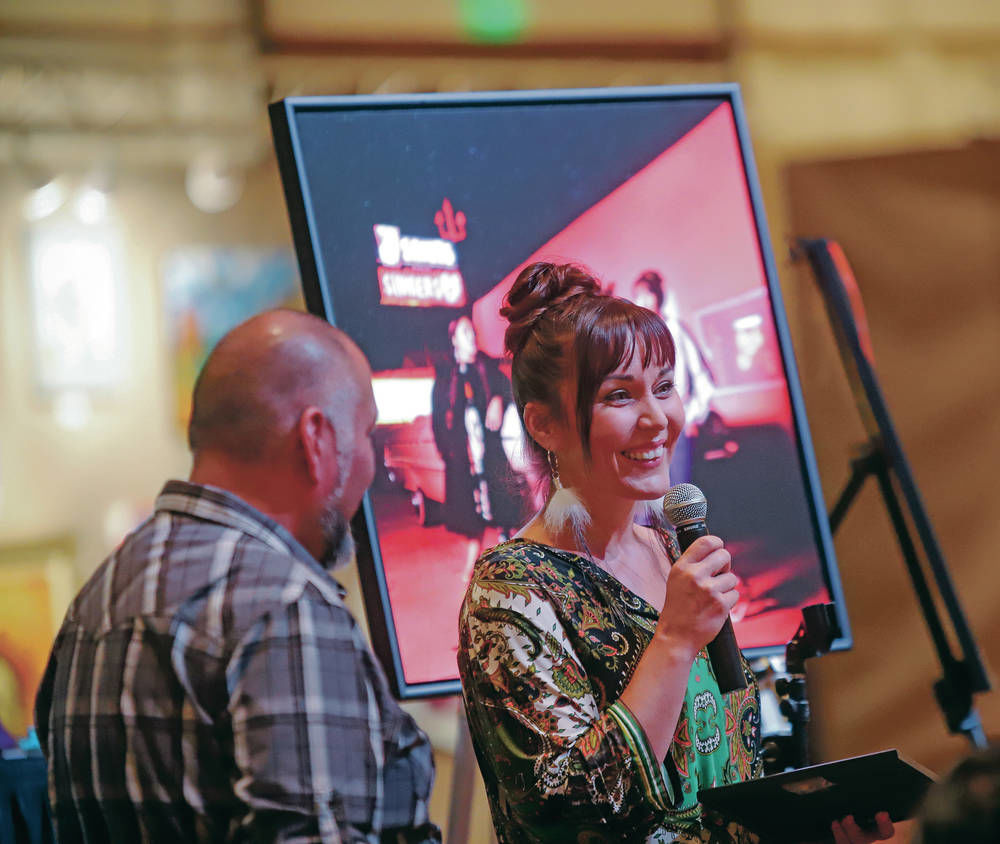 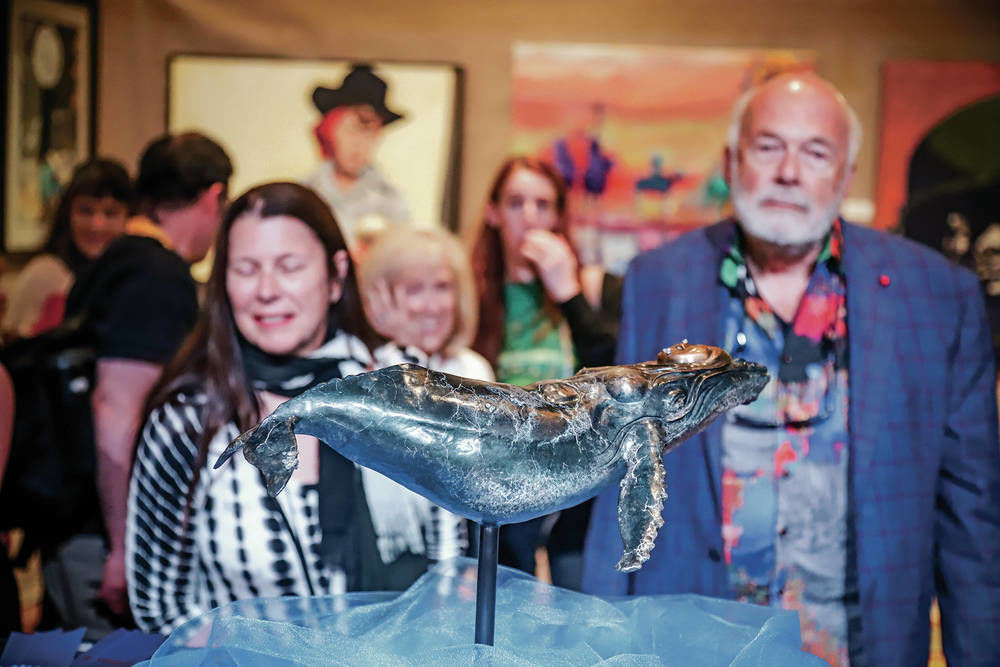 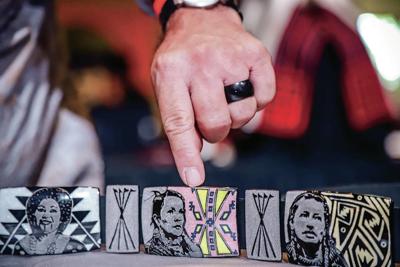 Isaak Kohlmeyer of Jemez Pueblo smiles Friday while looking down at his award in the youth category at the the 97th annual Santa Fe Indian Market awards presentation. Gabriela Campos/The New Mexican

Kevin Pourier clutched his Best of Show award at the Southwestern Association for Indian Arts Indian Market as if it were an Oscar, and like many who’ve captured a coveted prize, immediately began thanking those most responsible.

“This,” he said, “is dedicated to powerful women.”

Crowds cheered during Pourier’s acceptance speech at the Santa Fe Community Convention Center on Friday as the artist of Lakota descent spoke of eight influential Native women who inspired his winning piece of art — a concho belt carved of buffalo horn on which the women’s faces appear.

Though he spoke about his artwork, he made clear his success was about the women throughout the country who “are stepping up and taking control,” he said.

Those represented on the belt include Native women who’ve distinguished themselves in the arts, advocacy and politics, among many other accomplishments. They are:

• Wanda Batchelor of the Washoe Tribe of Nevada and California.

• Jodi Archambault-Gillette of the Lakota Nation.

• Suzan Harjo of the Cheyenne and Hodulgee Muscogee Nation.

“I’d have space for a thousand other women, I wish,” Pourier said, adding that it was difficult to choose just eight. “I wanted the grass roots … someone humble, loved by their community, not a really showy, up-on-the-stage type of person … I just wanted to bring awareness to these women.”

Pourier, from Scenic, S.D., asked each of the women to choose a design with personal meaning, to include as a background for each carving.

Because turtles are a central role in Cherokee culture, Pourier created a turtle shell design with malachite and mother of pearl stone inlays for Nagle. Behind Batchelor is a depiction of her grandmother’s basket designs. For Tipiziwin Tolman — her name means Yellow Lodge Woman in Lakota — Pourier designed three yellow tepees.

The belt, titled Winyan Wánakiksin and priced at $50,000, took all summer to create, using traditional carving and inlay methods Pourier said he taught himself 28 years ago. The more sanded etchings of horn are a gray tint, and the elevated areas are a shiny jet black hue.

While other Native carvers often use deer antler, Pourier said he gravitates toward buffalo horn — an element used by his Lakota ancestors. He said the material is what has largely set his work apart from other artists with similar techniques.

“The black, the shininess of the horn … for the Lakota people, the buffalo spirit lives in that horn cap,” he said, adding the meticulous attention to detail and effort it took to create the piece is immeasurable.

“If I had to think of the hours, I’d never do it again,” he laughed.

Between the intricate carvings of women are small vertical rectangles, covered in what Pourier said are 1,400 tiny dots he individually formed using a carving burr. Atop the detailed spots are etched tepees, which Pourier said is to “represent women, because they are the backbone of the Lakota people — and I imagine all Native communities.”

Pourier — who has participated in Indian Market for 21 years — said creating a piece of art like this is especially needed in today’s world, and he hopes the belt will encourage people to recognize feminine influences.

“It’s really relevant for today. … It’s not just a shiny piece of art, but it has meaning,” he said.

On the belt buckle, Pourier included Mother Earth. Around the globe are four sets of hands, in different skin tones, reaching toward the center.

“Our Mother Earth had to be on there,” said Pourier’s wife, Valerie, who assists with inlays and brainstorming ideas.

Pourier credited Valerie for coming up with the concept of the piece.

“This spring I was unfocused on art. I was just stuck,” he said. “My wife said, ‘You need to do a piece about women.’ ”

The couple said the idea stemmed from their time together at Standing Rock Indian Reservation, where they protested the construction of the Dakota Access Pipeline a couple of years ago.

Since Standing Rock, Valerie said she’s seen quite a lot of art inspired by the activism there. However, most of it was “about men. … We wanted to give women recognition.”

Pourier said he remembers watching women at Standing Rock undergo trauma during the protest, but they remained true to their cause nonetheless.

“I had seen firsthand the power of women,” he said. “They would push down fences and stand in front of bulldozers and get attacked with Mace. It was amazing, the courage of these women.”

But the piece doesn’t solely represent women the couple met at Standing Rock. And it doesn’t only represent Natives.

“It represents women all over the world,” Pourier said. “It’s not about me. It’s about the women’s movement.”

• Susie Silook is an author and sculptor who protests violence against Native women. She is most known for her ivory carvings.

• Tipiziwin Tolman is someone who has “overcome significant adversity” and is attempting to preserve Lakota culture and language, Pourier said.

• Mary Kathryn Nagle is a playwright and lawyer specializing in sovereignty of Native nations. She advocates for women’s safety against sexual violence and domestic abuse.

• Wanda Batchelor was the first woman ever selected to lead the Washoe Tribe of Nevada and California. She helped prevent the building of a dam along one of California’s last salmon runs.

• Roxanne Swentzell is an artist whose artworks have been shown across the globe, revered for their social commentary. She is co-founder and president of the nonprofit Flowering Tree Permaculture Institute and helped initiate the Pueblo Food Experience, which includes a cookbook focused on ancestral sustainability and healthy agriculture.

• Suzan Harjo is a poet, writer and policy advocate whose helped Natives recover more than 1 million acres of tribal land. She is the president of the Morning Star Institute and was presented the Medal of Freedom by Obama in 2014.

• Bobbi Jean Three Legs is largely credited for helping start the Standing Rock movement when she was just 24 years old and has lead numerous other protests against implementation of the Dakota Access Pipeline.

This story has been amended to reflect the following correction. A previous version of the story incorrectly reported Mary Kathryn Nagle as being from the Turtle Clan. There was a miscommunication in the interviewing process.