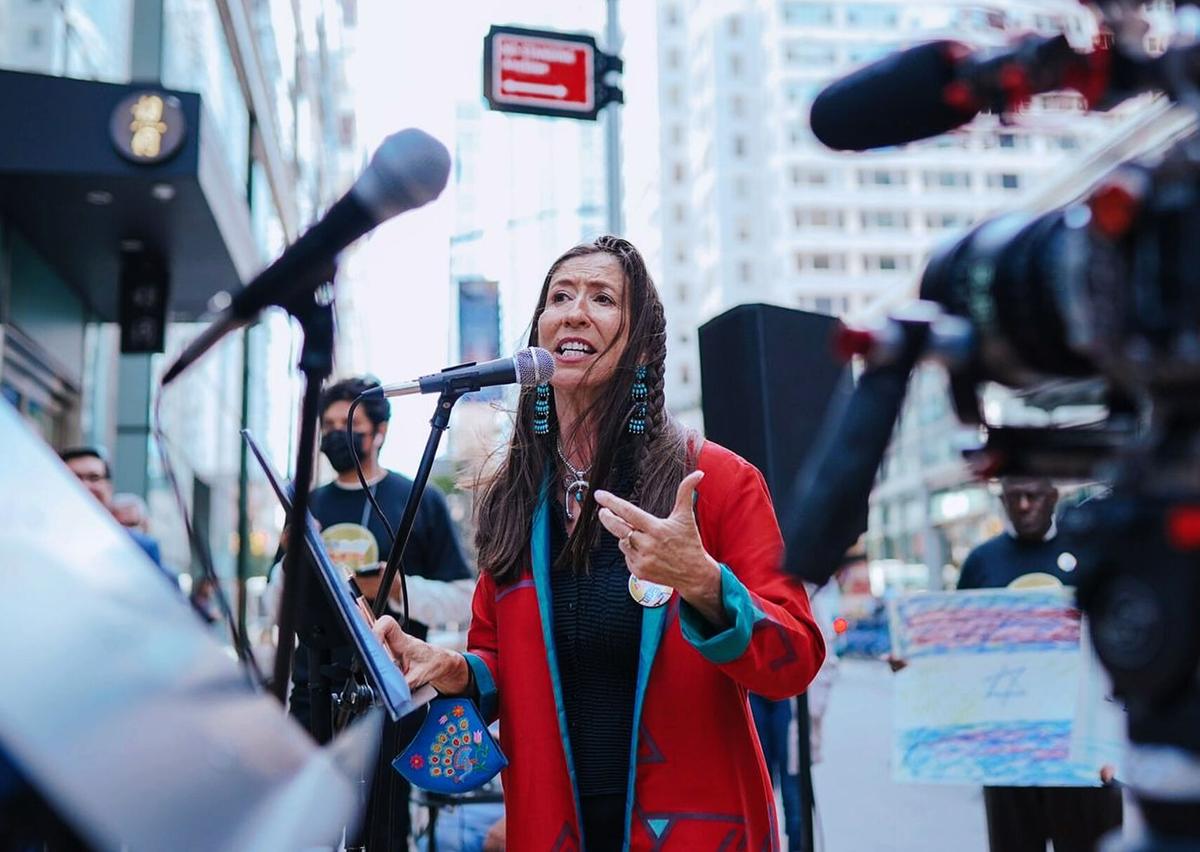 U.S. Rep. Teresa Leger Fernández speaks Oct. 11 as members of the American Sephardi Federation demonstrate in front of the Spanish Consulate General in New York. Leger Fernández has appealed to the government of Spain on behalf of descendants of expelled Jews who are being denied the right of return. 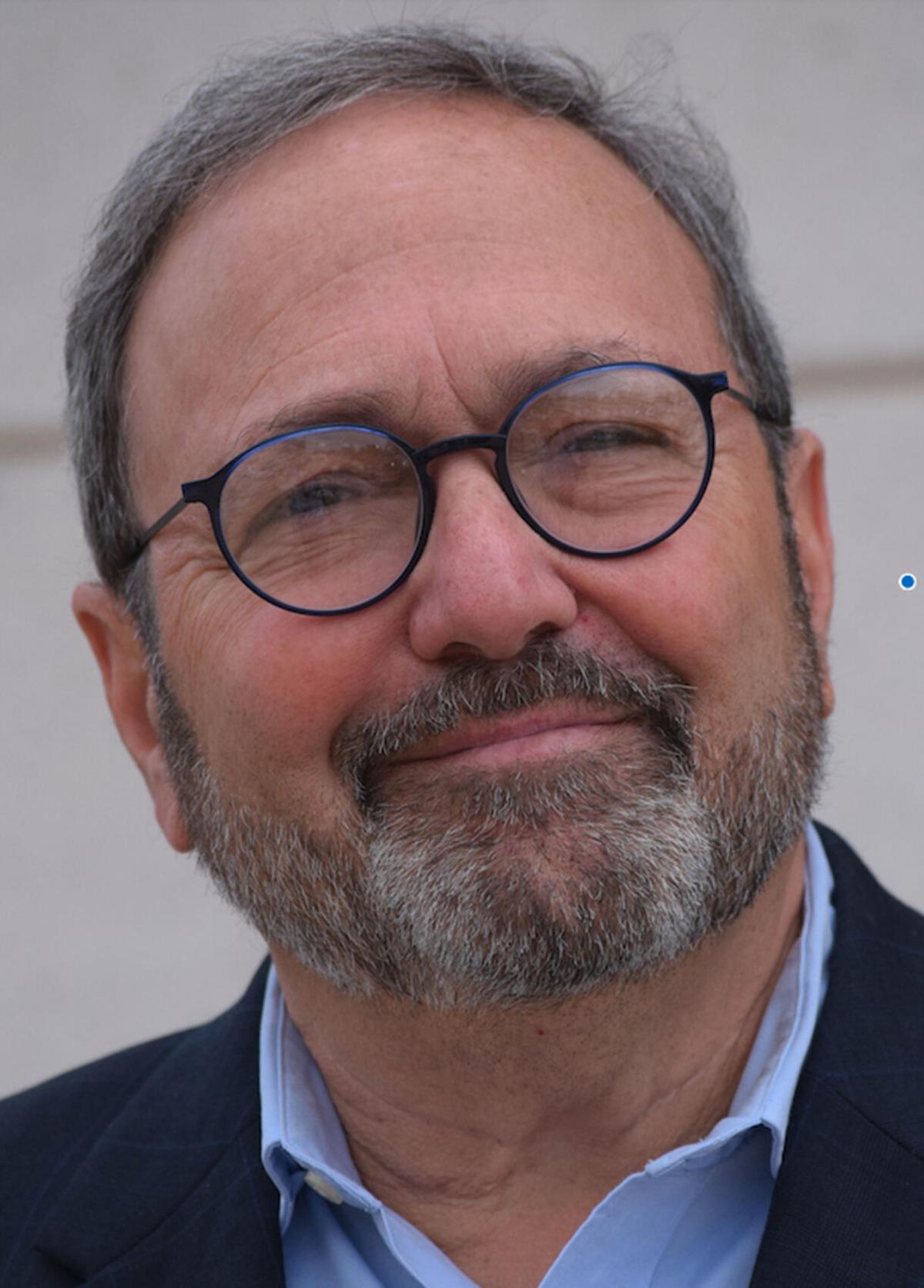 Rob Lennick, CEO of the Jewish Federation of New Mexico, has been helping find genealogical documentation for those seeking the right of return. 'It represents one of our core values, which is gathering people who are exiles,' he said.

More than 500 years after Spain banished tens of thousands of Jews during the Inquisition, the Spanish Parliament made an attempt to atone for the transgression by offering descendants a right of return and a path to citizenship.

The program, approved in 2015, proved popular. But after receiving an onslaught of applications, perhaps over 50,000, Spain recently changed its rules, leaving many applicants in limbo and flatly rejecting others — a move that risked reopening wounds the nation had sought to heal.

Several New Mexico descendants of banished Jews were among those whose applications had stalled. They turned to elected officials for help.

“This situation adversely affects our constituents, and strains the bonds between our nations,” the congressional delegates wrote. “We respectfully urge you to investigate and eliminate arbitrary bureaucratic barriers that have made it nearly impossible for Sephardic Jews to be approved after spending countless hours and thousands of euros to take advantage of this important program.”

“We urge you to rescind these changes and ensure that every eligible Sephardic Jewish descendant can receive citizenship to their ancestral home under the law as the Cortes Generales intended,” the lawmakers stated.

Leger Fernández said they have not received a response from Sánchez.

Jean Stevens, a retired schoolteacher who lives in Ranchos de Taos, began the process of seeking Spanish citizenship in 2017. She had learned her father’s ancestors came to the Southwest U.S. from the Sonora and Baja states in Mexico when she uncovered a number of marriage licenses and death certificates in her family’s archive.

“I went [to Spain] for a couple of weeks in 2018 to get my papers in order with the attorney and the Spanish notario [magistrate],” Stevens said.

She waited more than two years to hear back.

“August of 2021, the Spanish government let me know what was happening. My application had been denied,” she said. “They have strung me along all those years, from the beginning of 2019, when they said everything was going forward for applicants at that time.”

Stevens said the denial of her application was traumatic. “I really had trusted the Spanish government.”

Stevens has a half-brother who she said didn’t notify her that her father was dying until his final hours. She asked for, but never received, any money from her father’s estate, she said. She also asked for duplicates of family photos and never got them.

Digging through her ancestry was a way to be close to her father again. “I looked at this as a way of getting my true inheritance,” Stevens said.

The Spanish Inquisition began in 1478 under King Ferninand II and Queen Isabella to maintain Catholic orthodoxy in Spain and its colonies. Formally known as the Tribunal del Santo Oficio de la Inquisición, it replaced the medieval Inquisition, which had been under papal control.

The Inquisition, disbanded in 1812, forced the conversion or expulsion of up to 300,000 Spanish Jews, according to various estimates. It also was used to identify heretics (known as Judaizers or crypto-Jews) who continued to secretly practice Judaism while outwardly professing Catholicism.

Juan Blázquez Miguel, author of Inquisición y criptojudaísmo, wrote that more than 37,000 crypto-Jews were tried and more than 3,700 were burned at the stake.

Jews who fled Spain relocated to other areas of Europe, and in North Africa and the Middle East. Many later settled in Spanish-speaking areas of the New World, including Mexico, and some made their way to Northern New Mexico.

In 2015, Spanish King Felipe VI delivered a speech to Sephardic Jews and their descendants, apologizing for harms of the past and welcoming them back to Spain.

“Thank you for having kept, like a precious treasure, your language and your customs. They are ours, too,” he said. “Thank you, too, for making love prevail over rancor, and for teaching your children to love this country.”

Over the next four years, Spain accepted tens of thousands of applications for citizenship from the descendants of Spanish Jews.

Many people in New Mexico seeking to establish their genealogical heritage for a right of return received assistance from the Jewish Federation of New Mexico.

”It represents one of our core values, which is gathering people who are exiles,” CEO Rob Lennick said.

Lennick examines the history, migration patterns and names of families to establish Jewish ancestry, and makes referrals to professional genealogists.

”They are our neighbors and friends, and their historical migration brought them predominantly to New Mexico,” he said. “And that discovery for them is very important and very meaningful, whether they apply for citizenship in Spain or not.”

Recently, however, a number of major bureaucratic changes to the right of return program have slowed — and even stopped — the process.

Leger Fernández and her colleagues wrote in their letter to the prime minister, “Before this year, only one person had been turned down, and some 34,000 have been accepted. This year, thousands have been rejected, and even more haven’t received a response.”

“Although Ambassador [to the U.S. Santiago] Cabanas has stated to our offices that the process for granting nationality through this channel has not changed, it appears that there are numerous changes that have caused rejections,” the letter continued.

Those changes include overriding the authority of notarios to verify Sephardic ancestry, denying certificates of Sephardic origins issued by authorized Jewish organizations, changing the requirements of the genealogical documents already submitted and retroactively requiring a “special connection” — such as a donation to a Spanish charity — to have occurred before the right of return was offered.

“We urge you to rescind these changes. The broken promise of the noble gesture of reparation wounds more than if Spain had never made the offer of return in the first place,” the U.S. lawmakers wrote.

About 50 demonstrators, including Leger Fernández, gathered Oct. 11 outside the Consulate General of Spain in New York to voice their frustrations with the application delays and denials.

“When Spain offered the right of return, it meant a lot to my community,” Leger Fernández said. “We don’t want the hope and the leadership that Spain showed to the world to disappear.”

Jason Guberman, executive director of the American Sephardi Federation, added, “This is an issue that brings together the Hispanic community and the Jewish community. Together, we will overcome. Together, we must overcome.”

Tim Rivera, owner of Rivera Family Funerals & Cremations, was one of the demonstrators outside the Consulate General of Spain that day in Manhattan.

Rivera, 60, had seen an exhibition called Fractured Faiths: Spanish Judaism, The Inquisition, and New World Identities at the New Mexico History Museum in 2016.

“This was something that my grandmother — her siblings, my uncle — they used to talk about,” he said. “When I saw this exhibition, I was like, ‘Oh, I guess this wasn’t just family lore.’ ”

Rivera had studied in Spain while in college. His wife is Jewish. He said when his Jewish genealogy was verified, “it was a very emotional moment.”

He began the process of seeking Spanish citizenship in October 2017: gathering documents, studying Spanish, submitting to an FBI background check and learning about Spain’s constitution.

After two years of preparation, Rivera flew to Spain in the fall of 2019 and submitted his application through his lawyer. “We were told that the notario is the gatekeeper in terms of checking the paperwork to make sure that you’ve met the government’s qualifications.”

“There’s a web portal where you can monitor if anything’s been done,” he said. “It just kept saying it was being reviewed.”

After months of waiting, Rivera’s lawyer told him the Spanish government was putting the brakes on not just his application, but many others.

River said, “Everybody’s living in fear that they’re going to be rejected.”

I am also a person whose ancestors simply got on a ship and landed here.

To add to the article I would point out that even Israel has a problem weith Jews who were exiled from Spain. They still have TWO "high priests," one for European descendants and one for exiles from Spain and their descendants.

Of course it goes unnoticed that the US has citizens who have been banned and cannot return! Nationalism has its contradictions.

We also have abandoned Americans in Afghanistan, still trying to come home.

A wonderful story in that it still seems the world has a Jewish problem. Can't have to many of them return. Putting the brakes on indeed. It also makes you appreciate the USA even more. Yes, this country has put the brakes on more than once during its history making Trump no exception at all, but I've never heard of this country refusing en masse to re-patriate citizens. After all, I wouldn't be here if my parents and grandparents had not been accepted more than 100 years ago.