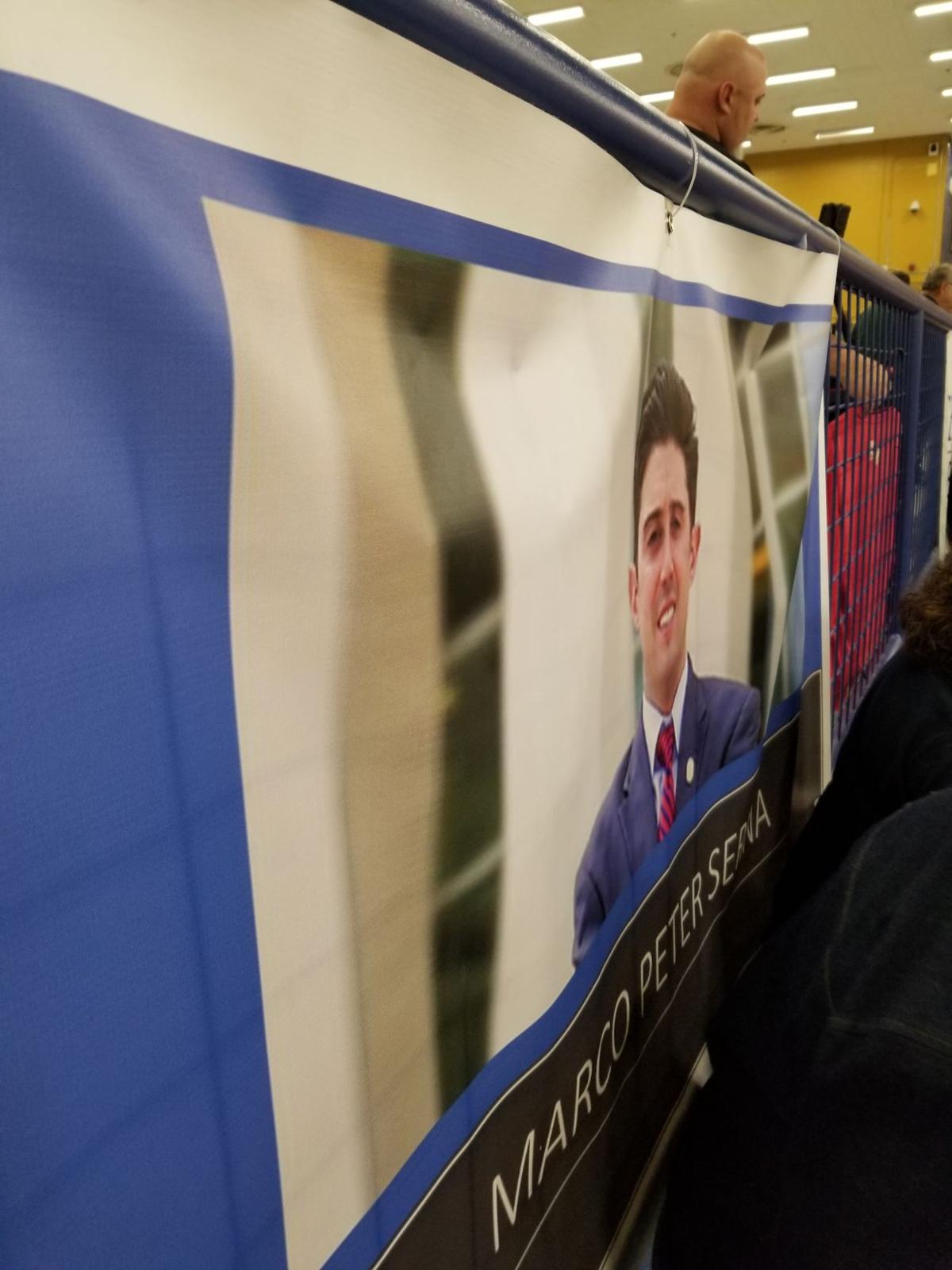 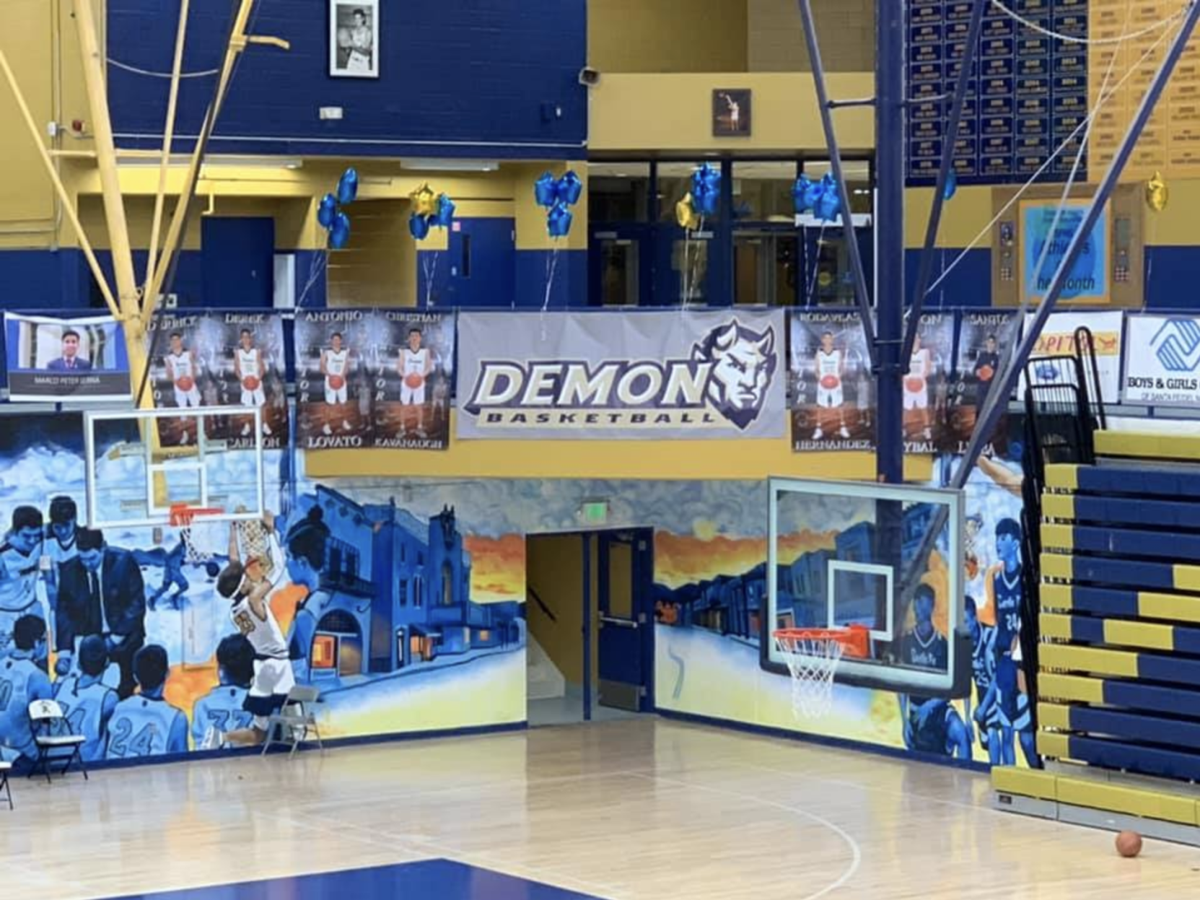 Carlos Ortiz was walking around Toby Roybal Memorial Gymnasium before Saturday’s big basketball game between Santa Fe High and Capital when a banner hanging from the railing stopped him in his tracks.

Unlike the other banners, most advertising local businesses, this one featured the smiling face and name of First Judicial District Attorney Marco Serna, who is running for Congress.

“I think it’s inappropriate for a public institution to be promoting any person,” Ortiz, 75, said Monday. “Now, it didn’t say ‘Running for Congress’ or anything like that — just a big picture of him with his name on it. I thought these other banners are promoting their business, and they’re supporting the sports program. Obviously, he’s promoting himself.”

“I told them they’d have to take it down,” García said.

García said a member of the school booster club, not a district employee, solicited the advertisement from Serna.

The booster club member, Andrea Serna Probst, no relation to the district attorney, said she was unaware of the policy.

“I solicit donations from many people in our community,” said Serna Probst, whose two sons play basketball for the Demons. “I go to everybody. I go to the neighbor. I go to my aunts and uncles in other states to help this program.”

“I don’t know Teresa Leger [Fernandez], and I don’t know Valerie Plame, but I’m happy to solicit them if you give me their number,” she said. “I’m happy to take a check from each of them. We can put all the banners up. Let’s do it. And you know what? If they care that much about the kids, they should write the check without the banner.”

“Nothing came from the campaign,” he said.

Though he hadn’t seen the banner, JonCarlo Serna said it would be a stretch to call it political advertising.

But for Ortiz, the politics behind the banner was crystal clear.

“It’s so out of place,” he said. “All the other ones are banners of businesses promoting their business. They have their name. They have phone numbers, and they briefly talk about the service they provide. They’re all businesses except for this one. It stood out.”

Ortiz, who is supporting Leger Fernandez, said the school district owed it to the other candidates in the race to give them equal advertising.

“It’s a public institution,” he said. “If they’re going to have his picture up, then they ought to have all the candidates’ pictures up.”

García said she plans to remind all the principals in the district what the policy states.

“We’re going to go back and just be clear in our policy,” she said. “We need to be careful that we don’t have those sorts of pictures up.”

This banner has been displayed since Volleyball season, prior to any election announcements. The only reason it was an issue was because of political opposition. Any donations given to any public school activity is in support of the students. Bottom line it’s not about anything more than helping provide for all the student athletes and demonstrating to them the value of generosity and community.

I can't believe this lady's ignorance and total disregard of public school policy: “I solicit donations from many people in our community,” said Serna Probst, whose two sons play basketball for the Demons. “I go to everybody. I go to the neighbor. I go to my aunts and uncles in other states to help this program.”

“I don’t know Teresa Leger [Fernandez], and I don’t know Valerie Plame, but I’m happy to solicit them if you give me their number,” she said. “I’m happy to take a check from each of them. We can put all the banners up. Let’s do it."

Sure, let's turn all the schools into billboards hyping politics and politicians, why not if it makes money, right????

What Michael said. Do we want to turn schools into official propaganda machines?

Many of you may not be aware of the financial strain on parents and the district for the athletes of schools in NM. Let me share just a couple.... Feeding our three teams, (C, JV & Varsity) which consists of about 40 + players alone, during travel runs about $600 per game. This season alone, we have about 10 travel games. Not including tournaments, where players spend the entire weekend, We also help them with meals and rides and water and hydration drinks throughout the season. There are some players that need assistance with shoes, and additional fees charged for shooting shirts, etc... This is where people who care about our children are able to help by making a donation. Parents are asked to solicit the community and we do. Yes, the banner of Marco Serna is down and he was told he would receive his donation back. He said, "Absolutely, NOT! I made a donation to help the kids!" I personally asked him for the donation and had the banner made, just because that what we do for everyone who donates. I'm grateful for people like Marco and I encourage anyone who is interested in supporting our program to reach out. Andrea Probst 505-316-7636

At least Serna is consistent. He is always ignorant, of the law, and of ethical behavior. The only question is; "does he do less damage to us as DA or in Washington?". Ideally, he would be charged with Malfeasance and removed from office, but AG Balderas is also guilty of Malfeasance, so the problem is obvious. The corruption is so deep, it's self sustaining. The only obvious path forward is to reestablish the Grand Jury's independence and take down the miscreants. But of course the miscreants are the ones who took away the Grand Jury's power. The corruption runs very deep, with the Trifecta corruption very obvious. We will remain the "Worst Managed" state. But hey, the sun is still shining, and shines on the just and the corrupt.

Serna is fundamentally ignorant and in his current position, incompetent. He has no business running for office. If he or his campaign gave it a moment's thought, they would know it is inappropriate to put political banners in public highschools.

He had lots of OJT. He managed to keep his father out of jail for a lot of years.