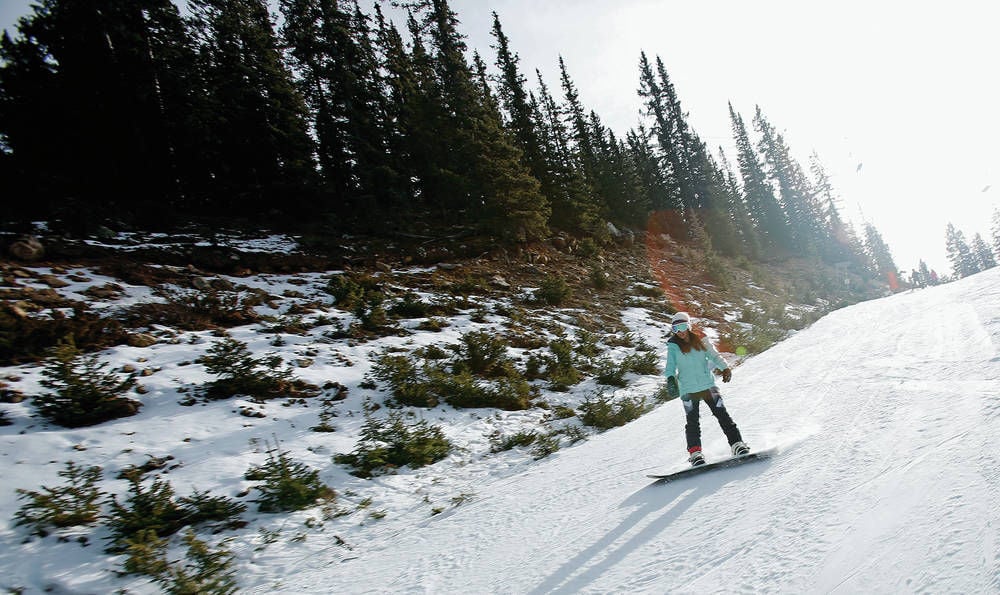 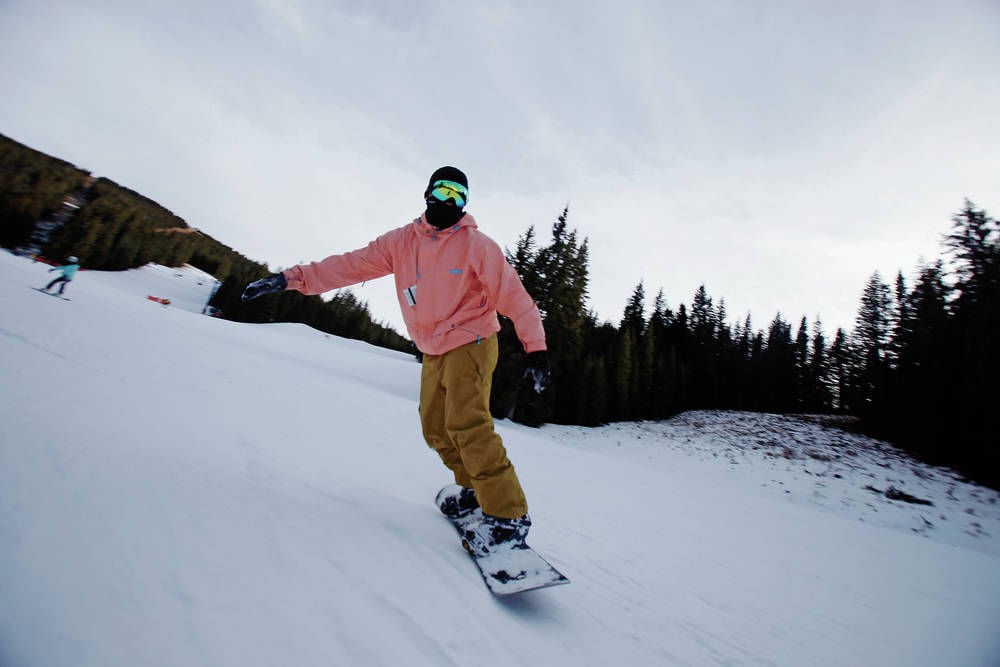 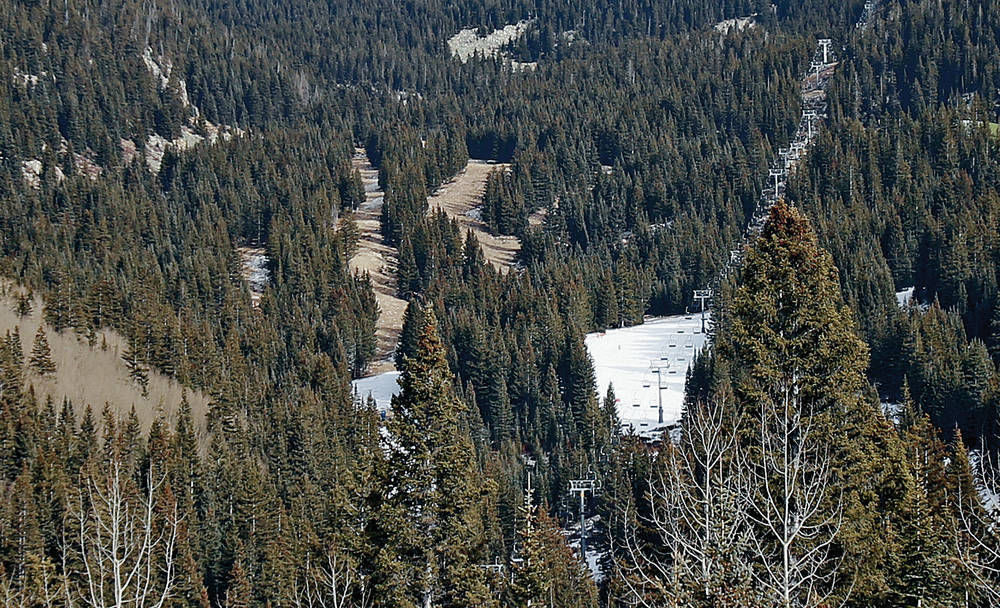 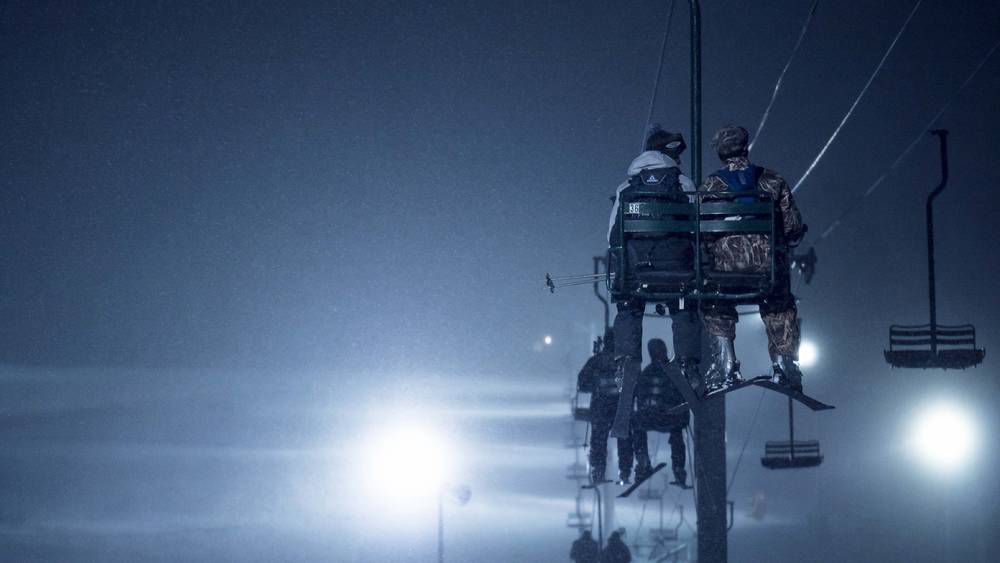 An inch of fresh powder on the slopes at Ski Santa Fe on Sunday morning and another dusting in the forecast Wednesday offered a glimmer of promise that winter might yet arrive in Northern New Mexico.

The need for optimism is paramount in a snow sports industry that relies on the state’s fickle skies.

Dash Hegeman, the marketing manager at Taos Ski Valley, where just 14 of 111 trails are open — with a paltry 18-inch base of mostly man-made snow — gets that.

“I think the key here is to stay positive,” he said, when asked how workers are faring on the mountain. He estimated a less than 5 percent drop in the number of workers this season, to 755 from 792 last year. The goal, he said, is to “get people as many hours as we possibly can, knowing that it’s New Mexico, and eventually it’ll start to snow and [hours] will pick up.”

As the East Coast has been slammed with subzero temperatures, blizzards and even a “bomb cyclone” — a powerful weather phenomenon that made those in its path hope forecasters were just speaking in frightening hyperbole — most mountain slopes in the parched West remain bone dry, save for the man-made snow that ski areas have been churning out since November.

The snowless season, which has pushed much of New Mexico back into drought conditions, has left many resort workers unemployed or underemployed, and raised concerns about the volume of water it will take to keep slopes covered throughout the season if storm systems don’t arrive.

Temperatures often have been too high for snowmaking, even on mountain peaks. Ski Santa Fe spokesman Steven Trafk said in an interview Thursday that temperatures have to drop below 25 degrees to make decent snow. That day, the mountain saw a high of 32.

Including Sunday’s small storm, Ski Santa Fe, which has a seasonal average of 225 inches of natural snowfall, has had only 7 inches so far this winter. It has a calendar-year allotment of 22.7 million gallons of water for snowmaking, Trafk said, but when it comes to water use, “It’s always a gamble because whatever we use this year, we can’t use at the start of next season.”

Ideally, he said, the resort balances out its water use for one season so it can get a good base on the mountain before a new season opens.

It’s not too late for an arctic blast to swoop in and salvage the current season. But the outlook for such a turnaround doesn’t appear likely.

Andrew Church, a meteorologist with National Weather Service in Albuquerque, said he expects the next couple of months to be “closer to climatological averages” than the region has seen so far this winter. But the average snowfall for January in the Santa Fe area is a mere 4 inches.

“Unless the storm systems continue,” Church said, “… we are going to be looking at a snowpack that’s far below average.”

That’s not just a blow for skiers and snowboarders, but a much wider concern for a high-desert state that depends heavily on spring runoff.

On Friday, a headline posted on the Outside Magazine website summed up the agglomeration of bad news: “This Is Literally the West’s Worst Winter in 60 Years.”

Snow conditions have been so bad in parts of Colorado, Outside and other media reported, that the Aspen Skiing Co. set up a soup kitchen last month to provide free meals to underworked employees.

“As long as we can’t get those guys fully employed, we’ll keep feeding them,” a company spokesperson told The Aspen Times.

Representatives of many ski areas in New Mexico were loath to report significant staffing cuts or discuss concerns about powderless slopes. George Brooks, director of the not-for-profit trade group Ski New Mexico, said the state’s snow sports industry hires around 2,600 workers every year, and resorts struggle in most years to recruit enough employees for the seasonal work. Brooks said he had no idea whether hiring at ski resorts has changed this year.

But there are signs of trouble on the mountains, particularly at some of the state’s smaller resorts.

The workforce at the Pajarito Mountain Ski Area in Los Alamos has been cut in half, to 65 employees from 130, with just two of six lifts running, a manager said.

The seven employees who usually keep things operating smoothly at the Enchanted Forest Cross Country Ski Area in Red River haven’t been working this winter. With not nearly enough snowfall, the Nordic skiing resort hasn’t been able to open. The situation is so dire that singer-songwriter Michael Martin Murphey held a benefit concert Saturday for the operation, which has been struggling to keep up with its payments to the U.S. Forest Service and other costs.

If fundraising efforts don’t bring in enough money to cover costs, said a post on an Indiegogo campaign for the Enchanted Forest, the dry season could lead to the resort’s shutdown for good.

“Unlike other ski areas that can make snow, we are dependent on the weather,” said Bob Blair, an out-of-work regular at the resort.

Larry McConnell, another longtime employee who worked in the resort’s rental shop on weekends for “walking-around money,” isn’t going broke this winter. He makes most of his income as a commercial fisherman in Alaska for a few months of the year. But he understands the economic and other impacts on the area — residents like himself lack an outlet for winter exercise and socialization.

McConnell met his wife at the resort about 24 years ago.

“Economically, sure, it’s a disaster,” he said. “But a lot of people count on that for being their fun in the winter. Not only is there no money coming in, but there’s no fun being had.”

“It’s heartbreaking,” said Ellen Miller-Goins, one of the owners of the Enchanted Forest. “Everything about this year has been heartbreaking.”

Marci Partin, an office manager at Pajarito, said low staffing at the Jemez Mountains resort is unfortunate but not necessarily an anomaly. In the 2005-06 season, she said, Pajarito didn’t open at all.

That was undoubtedly one of the most dismal winters in recent memory. Ski Santa Fe offered lift tickets for $28 that year, according to a New Mexican report at the time. A late March 2006 storm boosted skiers’ spirits, however, prompting the Santa Fe basin and other areas to extend their ski season for a week. Some resorts, such as Angel Fire and Sipapu, even offered free skiing after the storm.

The following winter brought an epic New Year’s Eve storm that dumped more than 2 feet on the city of Santa Fe and even more on the mountain.

Late-season storms are not unusual in Northern New Mexico. A late April 2017 storm that blanketed Santa Fe in half a foot of heavy, wet snow was the largest of the last winter season.

Area resorts are hoping for just such a blast — preferably much earlier. In the meantime, most are able to make do.

Ski Santa Fe has built a 22-inch base of man-made snow on its 12 open trails.

“We have spread it around as many runs as possible,” Trafk said. “We put it on the main run to a decent depth so it will last a long time. People seem to be happy with it.”

Krysty Ronchetti, a spokeswoman for Angel Fire Resort, gave perhaps the most upbeat report on the season’s outlook.

“Yes, we would appreciate some natural snow,” she said, but after investing heavily in snowmaking equipment, the resort’s slopes are packed with high-quality snow, particularly for beginning and intermediate skiers.

Angel Fire announced late last week that it is offering free night skiing on Fridays and Saturdays for anyone who purchases a lift ticket during the day, Ronchetti said, as a way to keep spirits high.

Even if storms don’t bring powder, she said, Angel Fire has no plans to shut down.

“We’re fully prepared to make snow the whole season if we need to,” she said.