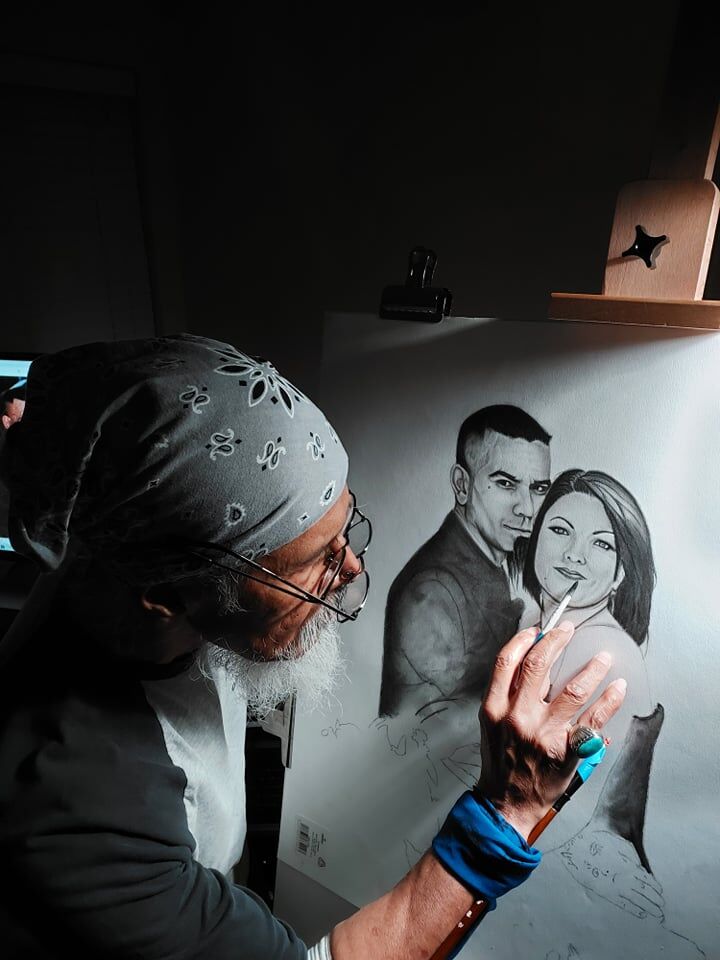 Salas works on drawing John Derick Griego and Bryana Trejo-Griego as part of the artist’s Gone But Not Forgotten project. The couple died in a car accident in September. 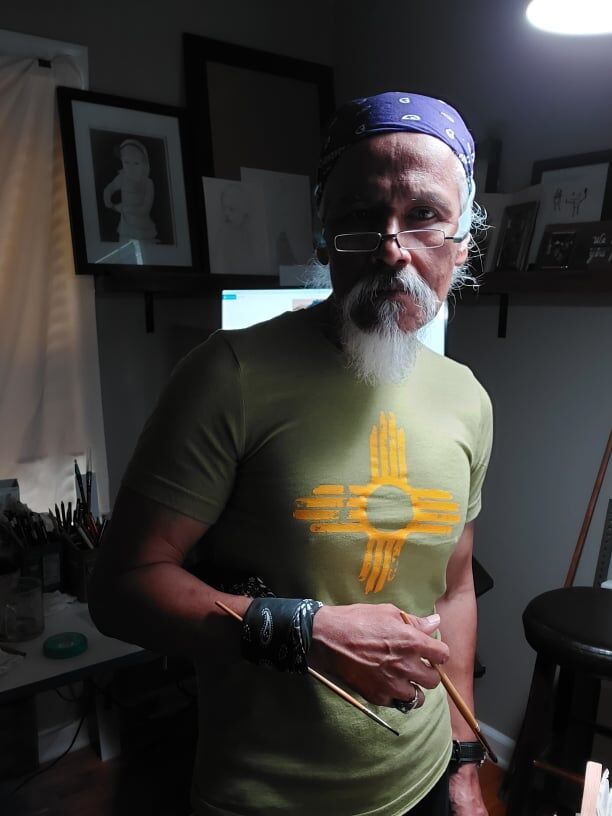 Angel Salas in his home studio in Tulsa, Okla., where he works part of the year.

Salas works on drawing John Derick Griego and Bryana Trejo-Griego as part of the artist’s Gone But Not Forgotten project. The couple died in a car accident in September.

Angel Salas in his home studio in Tulsa, Okla., where he works part of the year.

Angel Salas creates art to help ease the grieving process for families who have lost loved ones, and his current work features a Santa Fe couple.

John Derick Griego, 39, and Bryana Trejo-Griego, 28, were killed in a car crash in early September, a day before their one-year wedding anniversary. Salas’ memorial work depicting them and others is part of his Gone But Not Forgotten project.

“The sole purpose [of the project] is to just do my best to bring a little bit of comfort to someone’s life,” the Oklahoma-based artist said. “A million portraits could never give your son, your daughter or your husband back. But, if I could just produce a good memory of that person for you, I feel that I’ve succeeded in what I’m trying to do.”

Salas developed the project around 2013, when he noticed numerous posts about grief and tragedy on his Facebook feed. He contacted a Los Angeles woman who was mourning the loss of her son, who was killed in gun violence, and offered to create a graphite portrait of him.

“I told her, ‘I’ll send it to you, I’ll take care of the postage and everything else; I’ll send this to you and you don’t have to give me a penny,’ ” he said. “I did that, and then from there it just sort of took off.

“I found out right after that [first] portrait was finished, that there is a lot of hurting people,” he added. “And they come in all sizes, shapes, religious beliefs, political backgrounds. I mean, you name it, there is pain out there. What I do, it’s minute when you look at the vastness of these families all over our country that are hurting.”

Salas is from San Antonio, Texas, but has spent the majority of his life in Tulsa. In the past seven years, he has split his time between Oklahoma and Santa Fe, citing the rich artist community that prompted him to fall in love with the city.

Tamara Ortiz, White’s aunt, said she met Salas when he created the portrait of her nephew. When she saw his work, she was overwhelmed.

“It was just so beautiful,” she said in an interview Tuesday. “It was so lifelike, it was like you could reach out and touch his face.”

The portrait brought joy to White’s family, she said, and she was in disbelief that he created the image for free.

When her family friend lost her daughter and son-in-law — Griego and Trejo-Griego — in a crash, Ortiz contacted Salas.

“I believe in what he does,” she said. “I wanted to give back by connecting other families with Angel so he could be able to bring joy to someone else.”

“When you look at them it brings joy, but it brings so much sadness,” she said. “But you can respect and admire the artwork; it’s beautiful.”

Normally, Salas will work on commissioned pieces in addition to portraits for his project.

“I put out another announcement that I’m thinking of going maybe another six months to another year where I’m not gonna take on any commissions because there’s just so much work to do with this project,” he said.

Salas said he pours his “entire being” into the artwork, and the costs come out of pocket.

“I’m just a simple artist, just trying to do what I can do for people that are hurting,” Salas said.

People interested in donating to Salas’ project can send money to his studio at 4907 S. Detroit Ave., Tulsa, OK 74105.