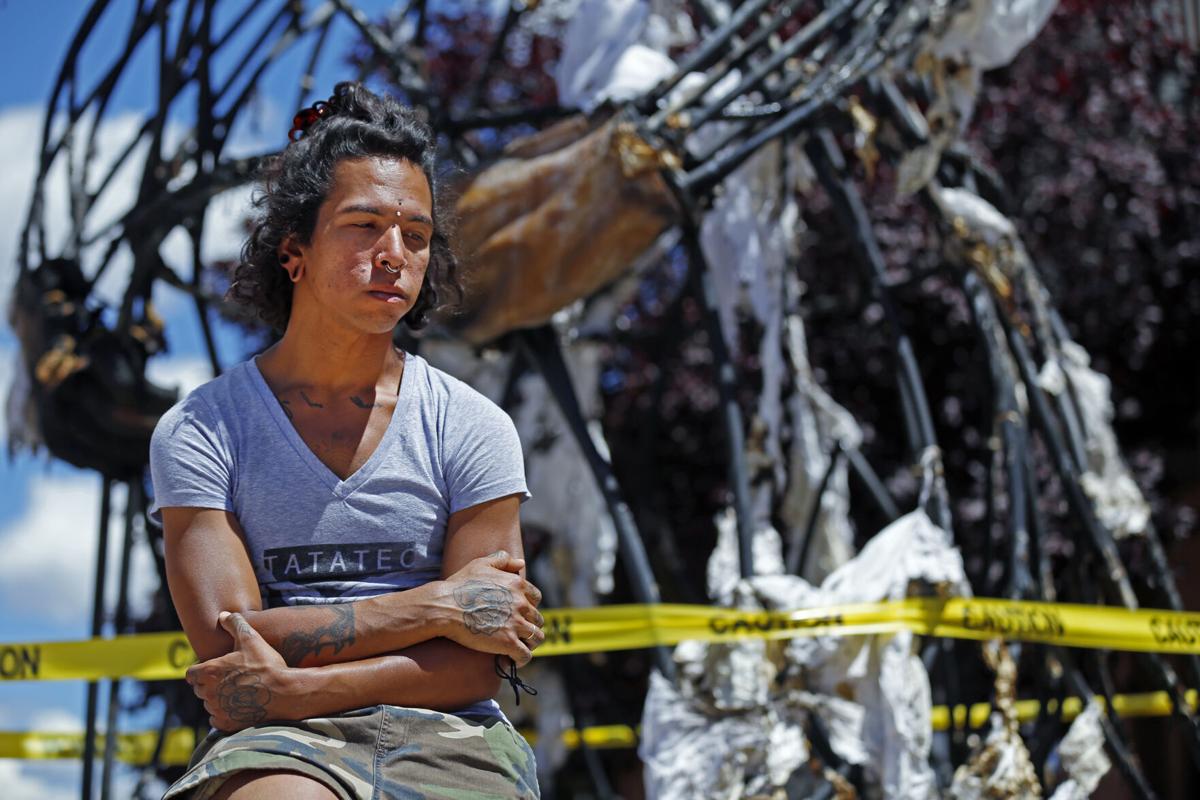 Artist Tigre Mashaal-Lively of Santa Fe sits in front of the remains of their piece The Solacii on Monday. The sculpture was set on fire by an unknown arsonist Saturday night. 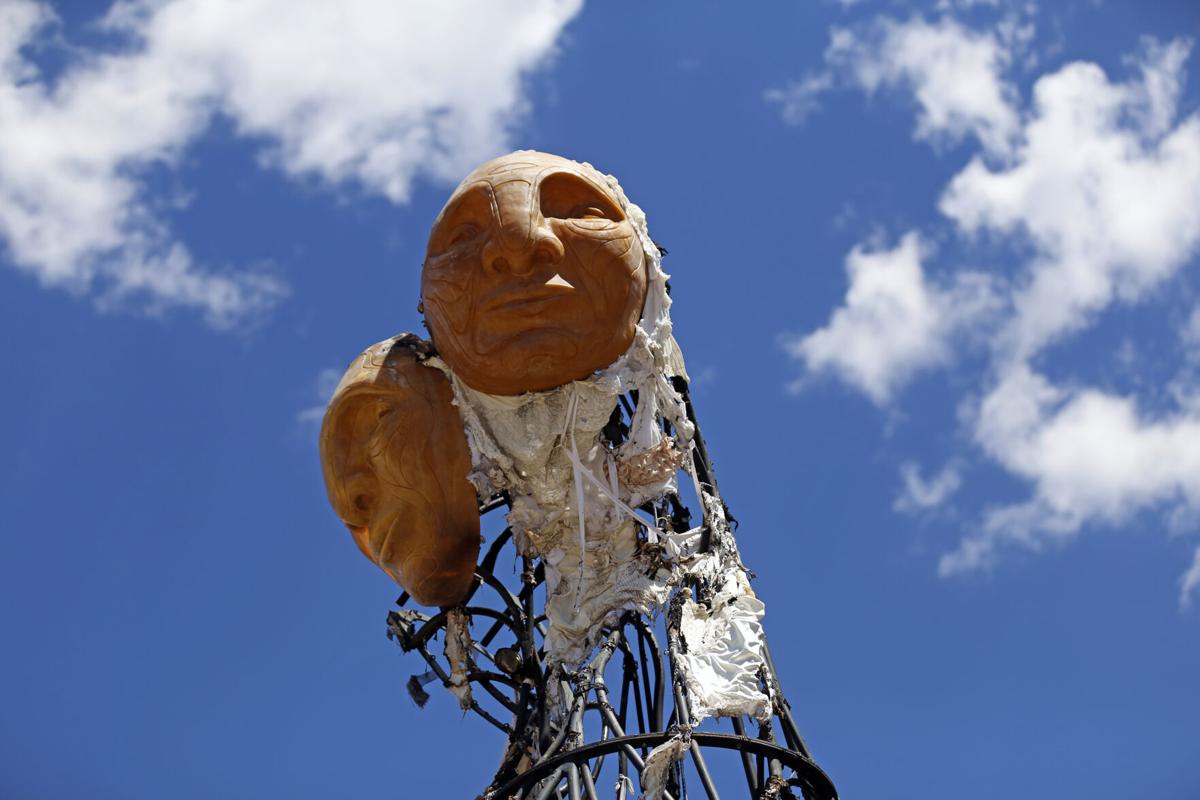 The Solacii by Tigre Mashaal-Lively was destroyed late Saturday by an arsonist. 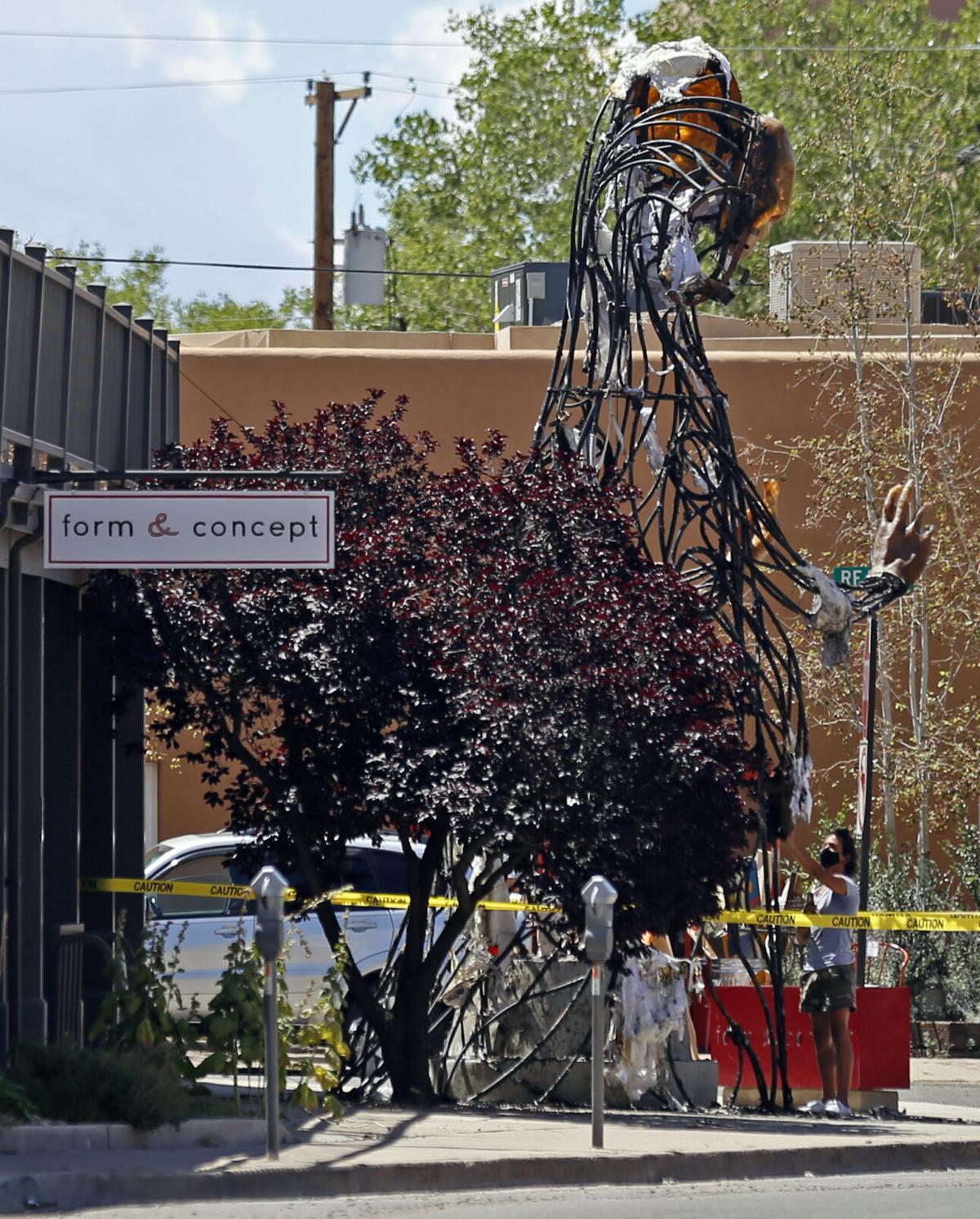 Artist Tigre Mashaal-Lively of Santa Fe looks over the remains of their sculpture The Solacii on Monday outside Form & Concept gallery. It’s the second time one of the artist’s pieces publicly displayed in Santa Fe has been vandalized. 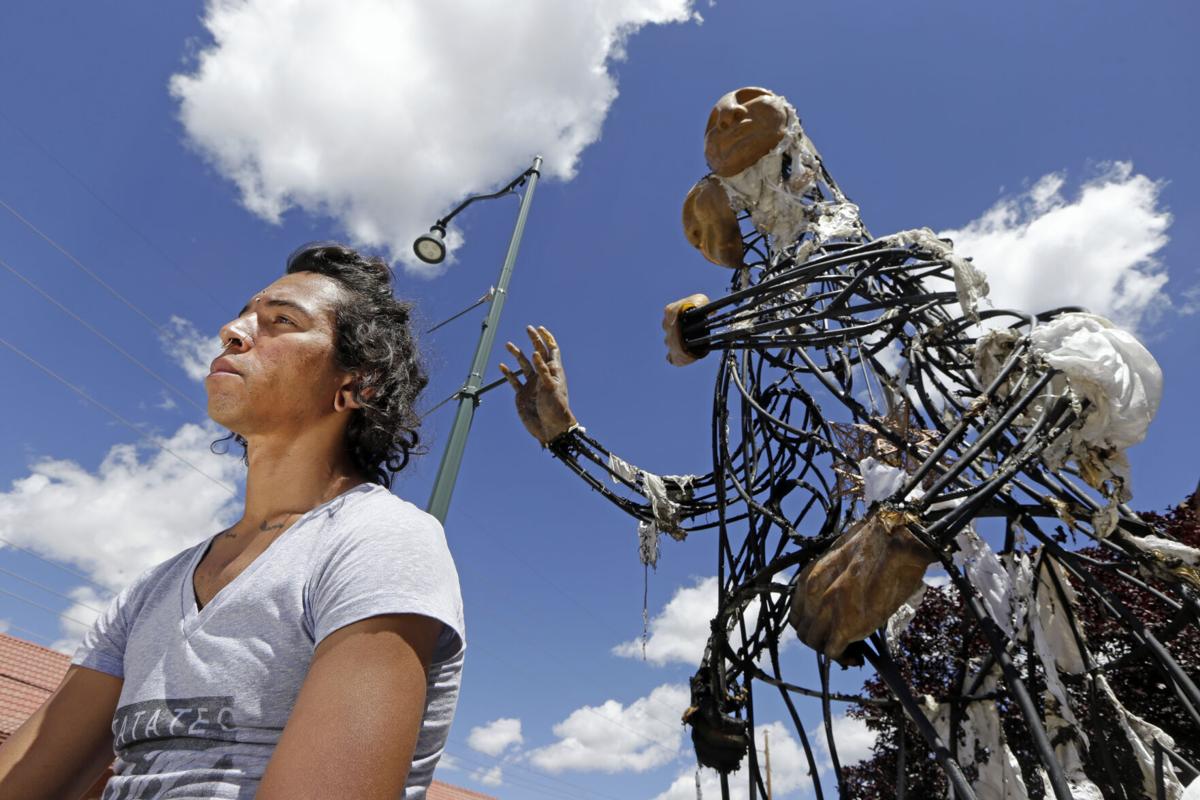 Artist Tigre Mashaal-Lively sits in front of the remains of their piece The Solacii on Monday. The sculpture was destroyed by an arsonist Saturday night.

Two days after an unknown arsonist torched their sculptural installation, artist Tigre Mashaal-Lively was still crying about the loss.

“There’s no shame in that,” the 36-year-old Santa Fe artist, one of several who created the piece, said in an interview at the Form & Concept gallery on Guadalupe Street, where The Solacii was displayed outside.

“It’s important to be able to grieve, and that’s so much about what the work is about,” Mashaal-Lively said. “I have no interest in performing stoicism.”

The artist awoke Sunday morning to phone calls and texts from people telling them about the crime, which took place Saturday night.

“We are working on pulling surveillance footage from the businesses in the area,” Joye said, adding the department has not yet identified a suspect but will be releasing more information Tuesday.

Video footage from the gallery shows the arsonist appearing around 11:18 p.m. Saturday from around the corner of Read Street, said Jordan Eddy, the gallery’s director. Within two minutes, the suspect lit the 21-foot-tall sculpture on fire and left the scene.

A photo of firefighters battling the blaze shows a red gas can sitting on the center of the sculpture’s foundation. Had that ignited, Eddy said, it could have caused considerably more damage.

No one was hurt in the blaze.

Firefighters were on the scene within minutes and put out the fire by 11:45 p.m. — but it was too late to save most of The Solacii. The piece was made of steel frame pipes, fiberglass and fabric.

In a statement, the gallery owner and staff called the destruction of the artwork “an undeniable act of violence against the artist and a considerable cross section of their community.”

Eddy and Mashaal-Lively said the work, depicting a towering figure in a cloak reaching out its arms as if to embrace humanity, was a symbol of solace and shelter.

Mashaal-Lively said it took about nine months to conceptualize and create The Solacii, which was first exhibited at the Burning Man event in Nevada in 2017. Mashaal-Lively and a group of artists moved it to California and then to New Mexico and mounted it on the corner of Guadalupe and Read streets in late July.

Eddy said the piece was meant to be part of a larger exhibition on the issue of shelter. The intent was to keep it on display for at least a year, and maybe longer, he said.

It’s unclear whether Mashaal-Lively will attempt to rebuild or restore the sculpture.

“A lot of people have expressed hope that it continues, comes back or is rebuilt,” the artist said. “I don’t know what that would look like, don’t know if it would be that same piece, if it would be something else.”

Mashaal-Lively said they bear no anger toward the arsonist at this point. Noting every person brings his or her own perspective, support or criticism to a work of art, Mashaal-Lively said, “For the work to move somebody in that way is a testament to how the work cannot be ignored.”

Born in Philadelphia, Mashaal-Lively has been creating both visual and performance artworks since childhood. Philadelphia was awash in street art and graffiti, and Mashaal-Lively gravitated toward that kind of work because it is accessible to everyone.

They earned a bachelor’s degree in art at Bennington College in Vermont and moved to Santa Fe two years ago. According to their online biography, their works, which include sculptural installations and murals, have been displayed in exhibitions around the country and world.

Mashaal-Lively, who identifies as Black-mixed race and queer, said they do not want to believe someone destroyed their work because of prejudice.

But this is the second time something like this has happened to a work Mashaal-Lively had a hand in creating. Earlier this year, vandals damaged a multicultural group altar they spearheaded addressing social justice issues, they said.

“I’m now two for two for public in art in Santa Fe that has been pretty violently vandalized,” the artist said. “And we have no real way of knowing why.”

Asked what they might say to another artist who suffered the same sort of loss and destruction, Mashaal-Lively said their message would be, “I’m sorry. I know how much it hurts, and I know how easy it is to let a few voices, a few loud voices and actions, shut you down or convince you that what you do doesn’t matter.”

But, they added, “There’s also so many people who value and appreciate. The work always impacts so many more people than you know. It’s OK to grieve. And it’s OK to give up, too.”

Joye said anyone with information on the crime should call Detective Javier Vigil at 505-955-5412.

Since the artist is quoted referring to himself with the singular pronoun "I," why does the reporter refer to him with the plural pronouns "their" and "them"? This is confusing.

I think it would have been best to have shown a photo of the original piece of art for all to see and appreciate and foil the arsonists purpose to erase and destroy; a valuable moment lost as the story is told. Please correct this and publish a good photo of the original work of art so all can still see!

What kind of a butt head would do such a thing other than being a sick jealous lout!!!

We won't know until they arrest someone and establish motive.

It is sad that for most of the residents of the city, we only find out what the sculpture was supposed to represent after it was destroyed. Perhaps in its ruins, this piece of art tells us more about ourselves than we would like to admit. A sculpture representing the embracing of humanity is destroyed by a human.

Sigh. Well, I'm glad to learn more about this piece of art. When I first saw the piece, it just seemed overpowering for that location and frankly, I expected it to say "Ni" as I approached. I had meant to get over to the site and find out what it was supposed to represent but the arsonist intervened. I think the ruins should remain there, along with the ruins of the obelisk and other things that people have seen fit to destroy to teach us, finally, that acting out destructively will only result in...destruction.

Heartbreaking! The artists create a beautiful manifestation to bring joy and comfort. They share their work over these past years and bring it to Santa Fe- the city of art and expression. Within a month it is destroyed. The ramifications of this act will have significant consequences on our city. I am a fellow Philadelphian. Despite a city with a long history of very high crime and vandalism rate- this would have never happened there.

Once the perpetrator(s) are caught will they be eligible for “restorative justice”?

Indeed, and no doubt they are the same kind of people who brought down the obelisk and vandalized all the monuments recently. The DA has no courage for prosecuting these kind of people.

I agree. "Restorative justice" does not fit these crimes.

Restorative justice could be the best way to open the door to a meaningful dialogue.

I sure hope not. What a terrible precedent the city established with this b.s. restorative justice!

Ironic, weird and sad. The artist has no idea why 'two for two' of their sculptures have been destroyed. It's a grievous wrong as a form of censorship.

Why are people reacting violently. Who. While many critics are about as considerate as Molotov, still, this "conversation " needs be in words not flames. (Having myself had a sculpture vandalized with graffitti spray, even this needs definition of focus.)

Possibly the artist can find solace/inspiration/ direction/release with Zozobra, a healthy mirror event, and Burning Man, even 'Sand Paintings', art designed to expire.

Even as we sympathize for the insult and loss. Regardless, it's a dangerous criminal act and needs be treated as such.

Tigre Mashaal-Lively please rebuild! Your incredible piece was a beautiful representation of shelter and solace. Lord knows, we ALL can use that.

On behalf of my town, which I love, but am so very disappointed with after this unforgivable act of violence, I offer you an apology. Please find it in yourself to rebuild and keep expressing your heart with your art.

The Town does not owe him an apology. The incompetent Mayor and lax DA owe out town an apology for unleashing this melee.

I am so sorry to learn of this senseless destruction of a beautiful work of art. I hope that the arsonist- vandal is brought to justice and that this artist continues to create and share their vision with us all. Peace.