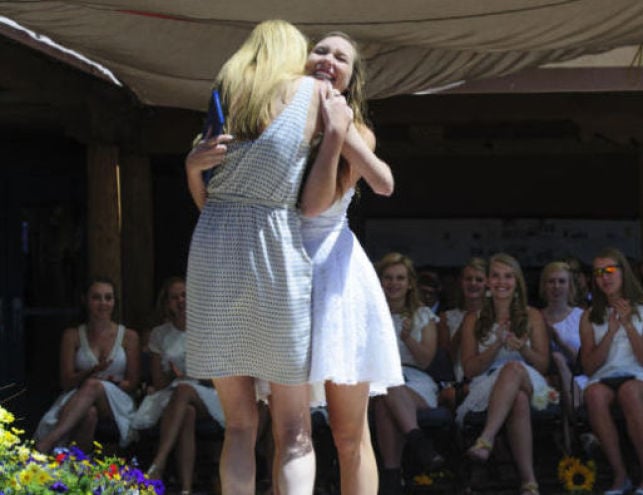 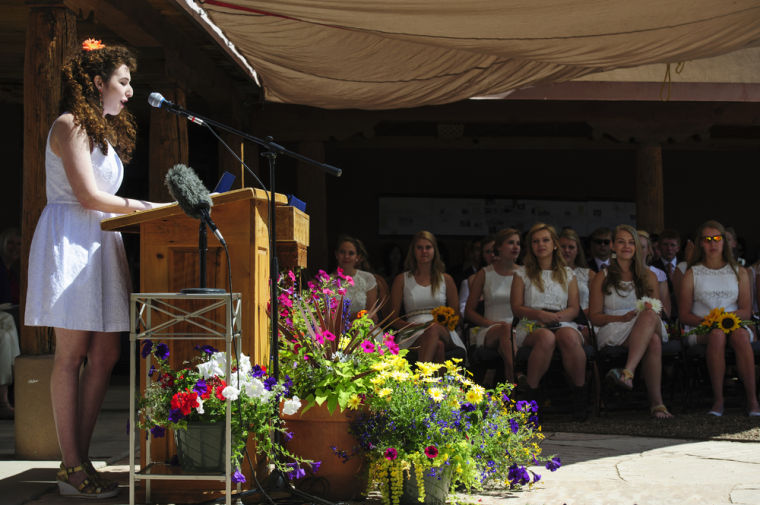 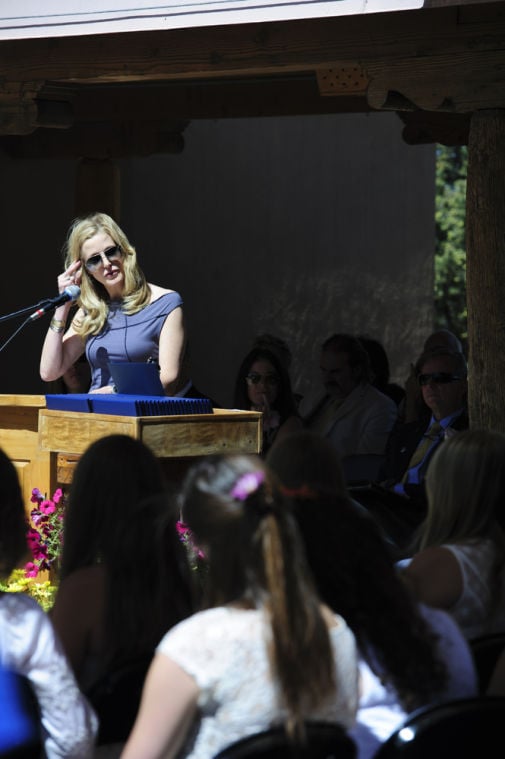 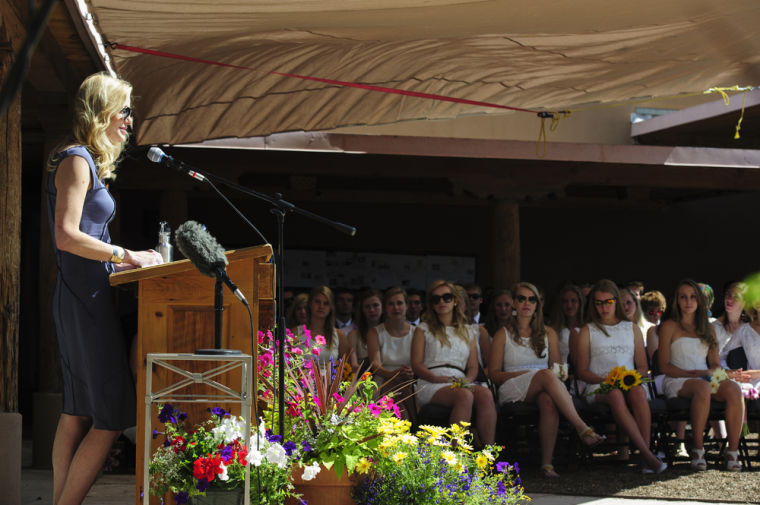 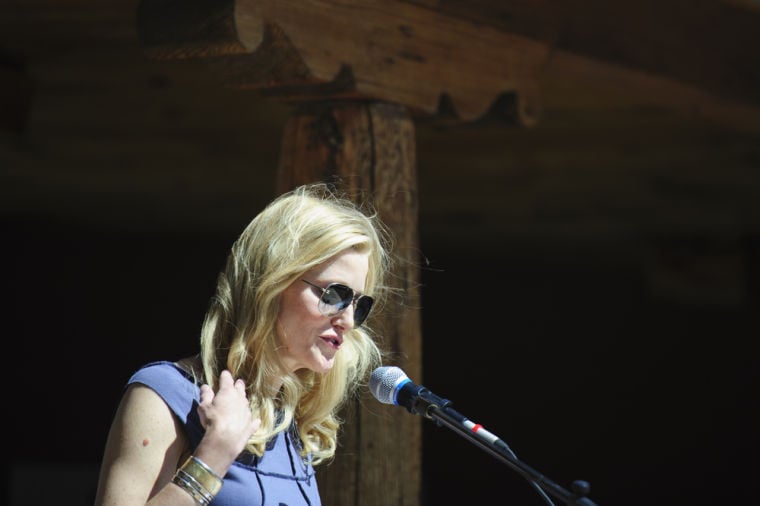 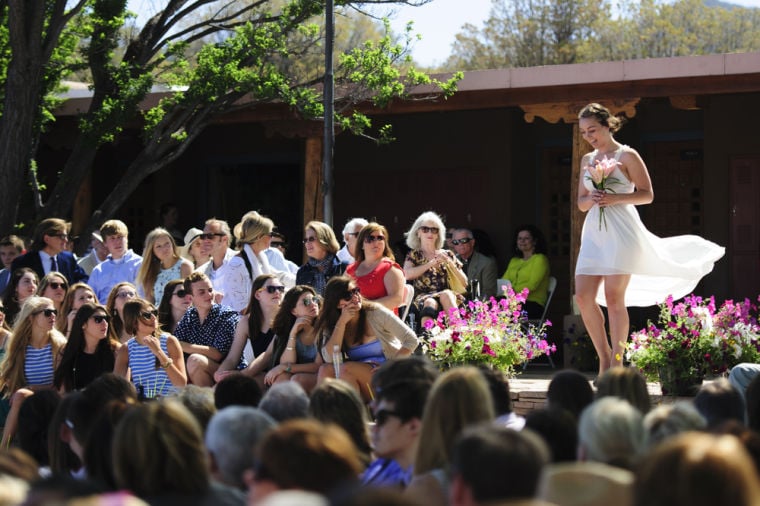 The seniors at Santa Fe Preparatory School gathered in a flurry of white dresses and suits in preparation for their graduation ceremony on Friday.

“Standing here, waiting to go out, that’s when we know it’s really true: We’re graduating,” said Sofia Franklin, who will study dance at The University of Texas at Austin this fall. “I was talking to my best friend last night about how this is the first moment in our lives that our choices are ours.”

“All of this commotion makes me anxious, in a good way and a bad way,” observed Allison Stertzer, who later received the school’s Elrington Award for her service to Prep. Stertzer was captain of the tennis team and co-president of the student council, and she started a Jewish pride club.

“I’ll miss the camaraderie of Prep and my teachers,” Stertzer said. “This is a quirky, close-knit, fun community. I’m not quite ready to leave this family.” Sterzer will attend Colby College in Maine.

Family members and friends endured bright sun and high winds as they assembled on the campus quad. Albert Orozco traveled from Dallas to watch his grandson, Mark Garrett, graduate. “I’m not sure if this is quite the right word, but [Mark] has been very obedient and receptive to guidance from his mother and father,” Orozco said. Garrett will attend Arkansas’ Hendrix College.

Headmaster Jim Leonard opened the commencement by honoring the faculty, in particular science teacher Jay Shetlon, who is retiring after 25 years of teaching at Prep. Leonard spoke of a recent meeting with alumni from the late ’60s, and reminded the students that their high school transcripts would quickly become irrelevant.

“Stay wild and free, but also emotionally stable, industrious and deeply and actively concerned about others,” Leonard said.

This year’s graduation address was delivered by actress Anna Gunn, best known for her portrayal of Skyler White on AMC’s Breaking Bad. Gunn is a 1986 graduate of Prep.

“I first discovered my life’s passion for acting right over there,” Gunn said, indicating the auditorium. “I remember doing a sense memory exercise in a drama class my sophomore year. … I felt like I had come home to myself, it was that instantaneous and powerful.”

Gunn said after discovering she was meant to be a performer, she was a dramatic teenager with a fondness for the original Broadway recording of the musical Cats. She joked that hearing the song “Memory” gave her parents shades of PTSD.

Gunn spoke about fear, and how it’s more important to embrace it than to overcome it. “Fear means you’re alive and engaged,” she said. “The world will shatter, but don’t let that dissuade you.”

Class speaker Anya Markowitz, who received the Robert W. Kurth Humanities Award on Friday, was selected by her classmates and a faculty committee to deliver the class address.

Markowitz, who plans to attend Yale University, peppered her address with pop culture references. “This year, we talked a lot about the future,” she said. “[We] made contingency plans that involved everything from becoming a gypsy to an American Idol contestant.”

She quoted Kurt Vonnegut, who once mused that, “true terror is to wake up one morning and discover that your high school class is running the country.”

“Though I adore [Vonnegut], I think he got it wrong this time,” Markowitz said. “We’ve been labeled the ‘me, me, me’ generation by Time magazine, which seems to think that our Instagram feeds are the only way to judge us as people. Spoiler alert: we are more than the sum of our selfies.”