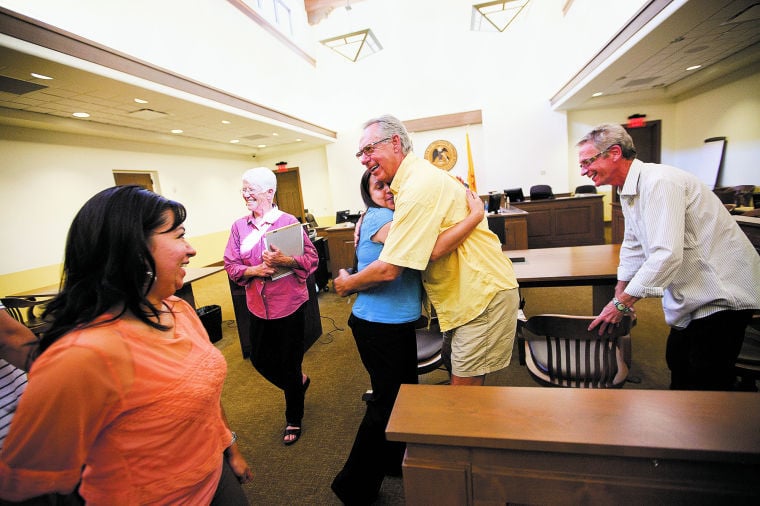 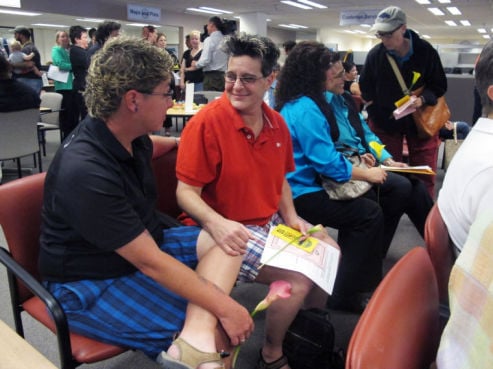 Taos County on Tuesday became the sixth and latest county in New Mexico to allow marriage between same-sex couples.

State District Judge Jeff McElroy ruled Tuesday that Taos County Clerk Anna Martinez must issue a gay couple a marriage license or present a legal argument why she should not.

The Taos suit was brought by Dale Schuette and Reg Stark, who were turned away Monday when they applied for a marriage license at the clerk’s office.

McElroy said Schuette and Stark had legal standing to marry in Taos County but were only denied a license due to their gender. McElroy said New Mexico law did not prohibit the couple from marrying.

Martínez said she did not intend to challenge the ruling. She said she would begin issuing licenses to same-sex couples on Wednesday.

Meanwhile in Albuquerque, dozens of gay couples gathered at a downtown plaza Tuesday to hear the words many once thought they would never hear: “With the power finally vested in me by the state of New Mexico, I now pronounce you married.”

The ceremony came just a few hours after the county clerk opened her door to a line of more than 100 people waiting to get same-sex marriage licenses following an Albuquerque judge’s declaration Monday that gay marriage was legal. Two other counties began issuing marriage licenses to gay couples last week, and three more said they planned to do the same.

Russell Garcia and Chayne Avery were among the couples who tied the knot in Albuquerque. They said it was the culmination of a long journey since they met in college 20 years ago — when there were hardly any gay characters on television, let alone the prospect that they could someday marry.

“Never thought I’d experience this,” said an emotional Garcia, 40, after the ceremony.

The ruling by state district Judge Alan Malott came on the heels of a similar decision in Santa Fe and the decision by the county clerk in the southern New Mexico county of Doña Ana week to recognize same-sex couples. That means residents in the state’s three largest counties can easily get same-sex marriage licenses locally.

Gay couples can now get married in about a dozen states after a series of court fights, ballot measures and legislative decisions provided new momentum to the movement in recent years. New Mexico’s law has long been unclear, but the floodgates were opened last week when the Doña Ana County clerk began issuing marriage licenses and a judge in Santa Fe ordered the county clerk there to do so. And Republican Gov. Susana Martinez and Democratic Attorney General Gary King indicated they planned to do nothing to try to halt the practice

Still, a group of Republican legislators is planning to file a lawsuit to stop clerks from issuing licenses to same-sex couples.

One of those lawmakers, Sen. William Sharer of Farmington, said it is up to the state Legislature, with the consent of the governor, to make laws — not the county clerks or district judges.

“It is inexplicable how a district court just today discovered a new definition of marriage in our laws, when our marriage law has not been changed in over a century,” Sharer said.

Paul Becht, the Albuquerque lawyer for the GOP legislators, said it’s uncertain when and where their lawsuit will be filed. With more counties starting to issue licenses, Becht said, he’s trying to determine where best to file a lawsuit “so we’re not getting scattered results all over the place.”

Bernalillo County Clerk Maggie Oliver said she was happy the judge ordered her to issue the licenses. She said she had long wanted to but felt her hands were tied. Oliver estimated that the county would give out around 100 same-sex marriage licenses by end of Tuesday.

Patricia Catlett and her partner of 25 years, Karen Schmiege, were the first to get their license there. Catlett, 61, is a graphic designer from Albuquerque, and Schmiege, 69, is a retired librarian.

“I am so excited, I can’t stand it,” Schmiege said as they signed their papers.

As the couple walked out of the booth where they received their license, the crowd applauded and cheered. The two raised their hands, and the crowd responded by putting their fists in the air.

Despite the actions by New Mexico’s bigger counties in the past week, most clerks in the state’s rural counties said they were not changing their policies.

Los Alamos County Clerk Sharon Stover and Sandoval County Eileen Garbagni told The New Mexican they would not be issuing licenses to same-sex couples until they receive a court order.

But Garbagni added, “I’m sure eventually, I’ll be doing it.”

“Not yet,” Union County Clerk Mary Lou Harkin told The Associated Press. “We’ve had a couple calls … but I am going to hold off for now, until I get a court order or other direction.”

But more court orders could be in the works as a number of clerks around the state said they had received calls from a man saying he planned to show up and seek a same-sex license and would file a lawsuit if denied.

Malott’s ruling was seen as more sweeping than the temporary Santa Fe order because he directly declared gay marriage was legal.

Helen Taylor, 45 and Apryl Harris, 47, of Rio Rancho, didn’t want to wait until the battle was played out in state courts.

The emotional couple was among the first to receive marriage licenses in Bernalillo County Tuesday. They had originally planned to get married in New York in February.

Steve Terrell and The Taos News contributed to this report

Now the State is seeing revenue and increase in the economy because of same-sex marriage bill. There is no denying that it is an economic booster. Besides the cost of marriage licenses, there is also the added benefit to the community of more people using local services for their weddings. These boosts can be seen in floral shops, wedding venues, even printing companies making invitations, and that doesn’t even account for the tourism the state will get from others looking to get married from outside states.

Not an activist, a realist following the will of the people, all the people, not just the people with power. Imagine that. Maybe we can finally separate the church from the state.

When a law is deemed to be unconstitutional, it is repaired by the lawmakers, it isn't to be ignored, or bypassed by activist judges.