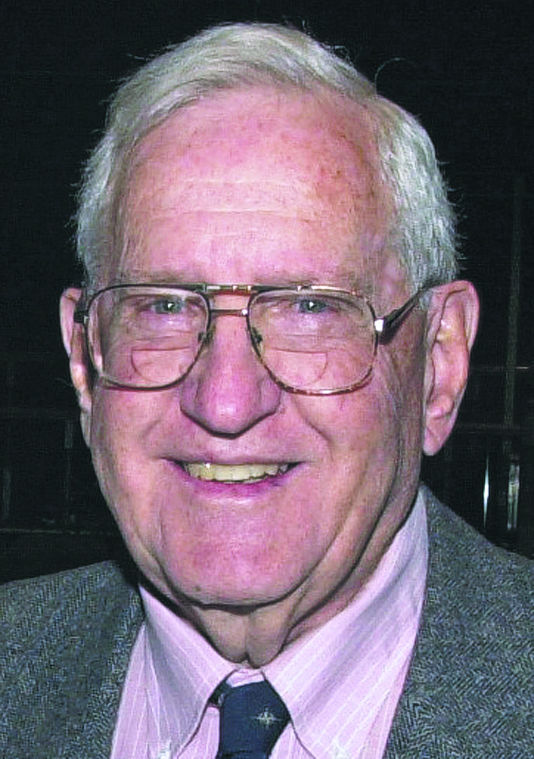 Harold Agnew with the plutonium core of the Fat Man bomb on the island of Tinian in the Northern Marianas. Courtesy Atomic Heritage Foundation

Harold Agnew with the plutonium core of the Fat Man bomb on the island of Tinian in the Northern Marianas. Courtesy Atomic Heritage Foundation

Harold Agnew, who worked on the Manhattan Project, witnessed some of the landmarks of the Atomic Age and served as director of Los Alamos National Laboratory from 1970 to 1979, died at his home in Solano Beach, Calif., on Sunday while watching football on television.

He was 92 and had suffered from chronic lymphocytic leukemia since the spring.

“He really was a legend, especially around here,” said lab historian Alan Carr. “He really had a knack for being at the right place at the right time to witness history.”

Born in Denver on March 28, 1921, he received an undergraduate degree from the University of Denver, then joined the Metallurgical Laboratory at the University of Chicago, where he worked with Enrico Fermi on the construction of Chicago Pile-1, which produced the first controlled nuclear chain reaction in December 1942.

He joined the Manhattan Project in Los Alamos the next year. His first assignment was to assemble and run a particle accelerator used to study the odds of neutrons striking different kinds of atomic nuclei — data vital to judging the merit of various bomb designs.

But when the atomic bomb was tested at Trinity Site in central New Mexico on July 16, 1945, Agnew was far away, preparing for the bombing of Japan.

On Aug. 6, 1945, he boarded a B-29 bomber that flew beside the Enola Gay that carried the atomic bomb dropped on Hiroshima that day. He brought along a 16-millimeter Bell & Howell movie camera that he used to record the scene.

‘There were no second thoughts about using the bomb,” he said in an interview in 1995. “But you have to be old enough to understand that.”

After the war, Agnew returned to the University of Chicago, where he earned a master’s degree and a doctorate in physics, then returned to Los Alamos to work on the development of the fusion, or hydrogen, bomb.

In 1954, he was photographed with a barracuda he caught in the Pacific during a break in preparing for the fusion explosion. Carr said Agnew later slipped the fish into the bed of the humorless test director as a joke. When asked years later why he did it, Carr said, Agnew responded, “Because there were no horses in the island.”

“He was a prankster — lot of fun,” Carr said of Agnew. “Harold was no fan of bureaucracy. He fought bureaucracy tooth and nail.”

Agnew served as a Democratic state senator from Los Alamos from 1955 to 1961. In 1964, he became head of the lab’s Weapons Nuclear Engineering Division. In 1970, he was named as the lab’s third director, following J. Robert Oppenheimer and Norris Bradbury.

Carr said that during Agnew’s tenure as director, he had to deal with the first political backlash against atomic weapons and attempts to cut the lab’s budget. But while remaining a staunch proponent of nuclear weapons, he helped shepherd in underground weapons testing, built the Meson Physics Facility and acquired the lab’s first Cray supercomputers.

“When Harold came in, he created programs that didn’t have any connection to the weapons program,” Carr said. “He just believed that Los Alamos was really the best place to do big science. That’s the laboratory of today, so I really do think that Harold Agnew, during his directorship, invented what the laboratory is today.”

Agnew retired from the lab in 1978 to become president and CEO of General Atomics in San Diego, where he advocated for smaller, safer and lower maintenance reactors for the generation of electricity, until he retired from the firm in 1985. He became an adjunct professor at the University of California, San Diego, in 1987.

Even in retirement, Agnew remained a staunch defender of nuclear weapons and nuclear energy. In 1991, he took The New Mexican to task for reporting the methods and routes of shipping nuclear materials in and out of Los Alamos. He remained confident that scientists should be trusted to proceed with their work.

A few years ago, when Agnew spoke at a lab symposium, he was asked what it was like to be at the world’s first nuclear chain reaction beneath a football stadium in Chicago. Carr recalled his response: “Well, it was Fermi’s experiment. We knew it was going to work. We went to lunch.”

His wife, Beverly Agnew, who was a secretary for Oppenheimer in wartime Los Alamos, died in 2011. Agnew is survived by a son, John Agnew; a daughter, Nancy Chapman, four grandchildren and three great-grandchildren. Funeral services have not yet been announced.