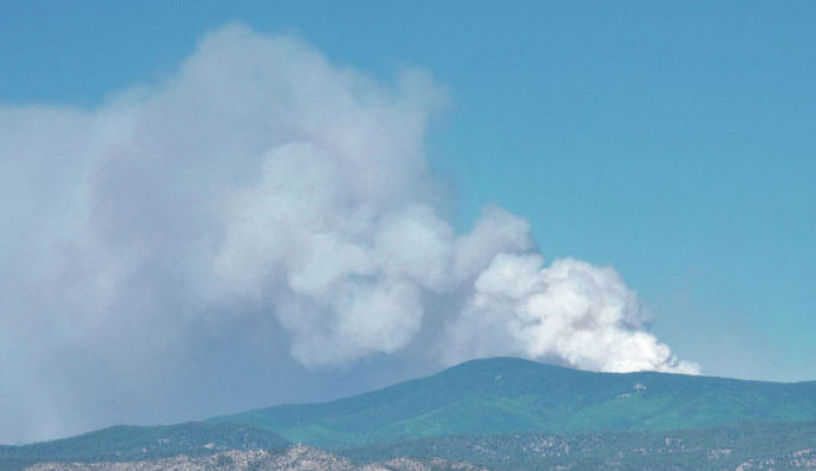 A plume of smoke seen from the Jaroso Fire in the Pecos Wilderness billows into the sky over Pojoaque on Sunday. Although the fire had been quietly smoldering for about a week, it hit a pocket of fuel Saturday and Sunday, sending up smoke that had area residents worried. Firefighters have been unable to reach the blaze burning in remote, dangerous terrain. Clyde Mueller/The New Mexican 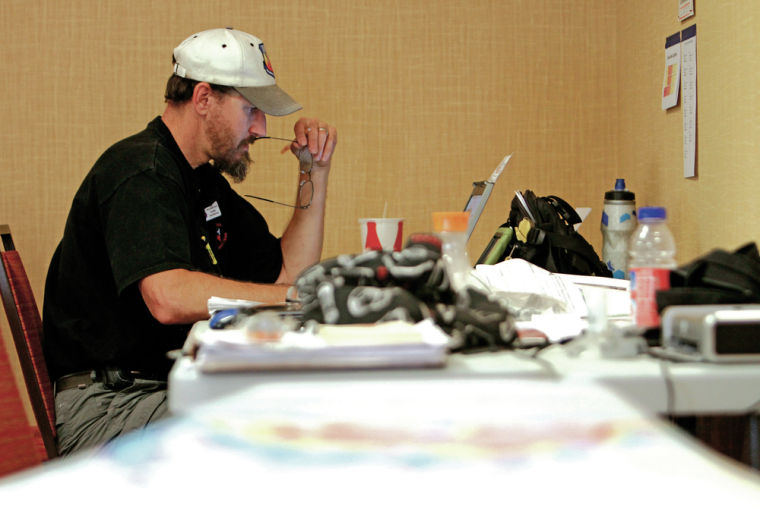 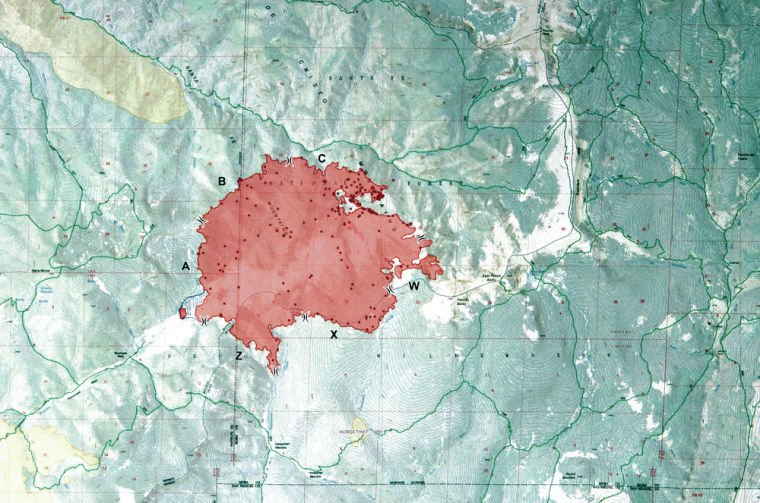 A map of the Jaroso Fire at the Courtyard at the Marriott, where the fire management team has been based. Luis Sánchez Saturno/The New Mexican 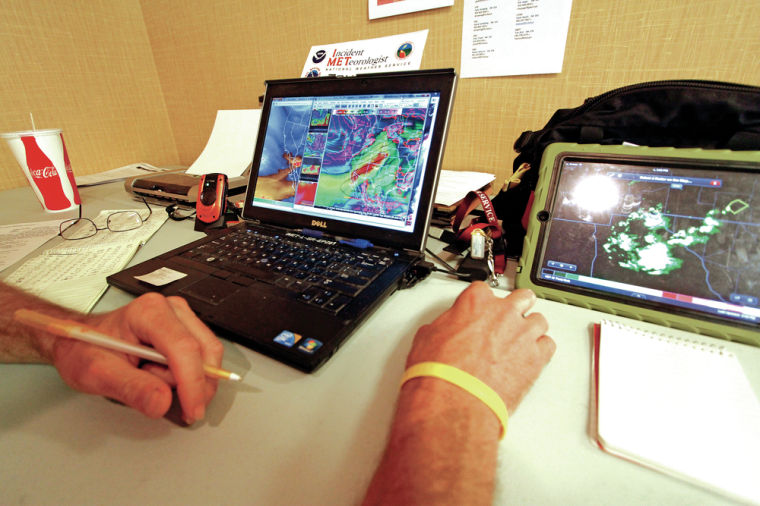 A plume of smoke seen from the Jaroso Fire in the Pecos Wilderness billows into the sky over Pojoaque on Sunday. Although the fire had been quietly smoldering for about a week, it hit a pocket of fuel Saturday and Sunday, sending up smoke that had area residents worried. Firefighters have been unable to reach the blaze burning in remote, dangerous terrain. Clyde Mueller/The New Mexican

A map of the Jaroso Fire at the Courtyard at the Marriott, where the fire management team has been based. Luis Sánchez Saturno/The New Mexican

On June 10, the day lightning started the Jaroso Fire deep in the Pecos Wilderness, a young smokejumper died fighting a wildfire in California’s Modoc National Forest.

The death of Luke Sheehy, 28, was still on John Truett’s mind recently as he looked at a map showing his team’s tactical plan for fighting the Jaroso Fire. Sheehy was struck and killed by a limb that broke off a tree and fell more than 60 feet on top of him.

Tragedies like this hit firefighters in the gut. Maybe it hits even harder for people like Truett, charged with keeping firefighters safe. Truett is the operations chief for the Type I national incident team that managed the Jaroso Fire until Sunday.

Terrain and weather have kept ground crews out of the Jaroso Fire area. It is too unsafe. The fire still isn’t threatening any houses or watersheds. But like teams on other wildland fires, the one assigned to Jaroso had a plan within 48 hours after the blaze was reported of how they would attack it if it started making a run for critical resources.

Truett’s decisions, and those of incident commander Tony Sciatta, are backed by a team of specialists who are trained to understand and predict what a wildfire will do. They use maps, weather data and experience to determine the right plan in the right place at the right time.

“We’re not out there just putting our fingers in the air,” Truett said. “We have a lot of science behind it.”

On Friday, the Jaroso Fire was still zero percent contained and smoldering like a sleeping tiger. On Saturday, it hit a new patch of dead and downed trees, sending up a new pillar of smoke that worried Santa Feans who could see it.

Fire managers know at any moment, given the right conditions, the blaze could roar to life and make another fast, intense run through bug-killed trees and up steep slopes. On Inciweb.org, where the latest conditions for large fires are listed every day, the Jaroso Fire’s condition has remained steady — growth potential: high; terrain difficulty: extreme.

Forest Service Chief Thomas Tidwell earlier this year directed forest supervisors to prepare for protecting resources before, during and after a wildland fire. With wildland fires getting bigger, fire seasons lasting longer due to climate change and resources decreasing due to budget cuts, fire managers have to be efficient.

A group made up of land and reservoir managers, and state, tribal and federal officials met in March to come up with a list of what needed to be protected if a fire started in the Sangre de Cristo Mountains. The list included watersheds, houses, power lines, communications towers and a historic cabin. That information came in handy when members of Truett’s team set out to assess the Jaroso Fire. It also helps tell Truett where to place firefighting crews and equipment.

They have to prioritize what is most important to protect in the heat of a wildfire, Truett said. “What is real-world impact? How many people are affected, and how will they be affected?”

Take a watershed: “It’s a one-dimensional thing,” Truett said. “But not really — if fire and the flooding after affect water flow, that will affect irrigation, which affects growing crops, which can affect families. It can become a social-political nightmare. That’s kind of how we rate the priorities.”

The Jaroso Fire isn’t threatening any structures or power lines yet. It is miles from the closest communities and miles from watersheds feeding Santa Fe, Pecos and Las Vegas, N.M.

On the wall of the hotel conference room where the operations team was based was a map showing the priorities: Trailriders Wall, Upper Skyline Trail and Rio Medio.

If the fire reaches any of those points, the team has a set of choices in their written plan. They have two to four days to order the extra resources they need and to get to work on the fire line, depending how fast and intensely the fire is burning.

If the Jaroso Fire reaches the Upper Skyline Trail, for example, several homes and the Sipapu ski resort would be in the fire’s path.

South of the Jaroso Fire in the Pecos Canyon, firefighters were just bringing the 10,000-acre Tres Lagunas Fire under control. Each blaze has had its challenges for firefighters and operations chiefs. Tres Lagunas threatened dozens of homes, but at least there was a paved road and several dirt roads nearby, so that firefighters could position engines and crews around it.

The Jaroso Fire is so deep in wilderness, it is seven miles from the nearest trailhead. There are no roads. The fire is fed by patches of insect-killed trees and a 1,300-acre timber downfall caused by heavy wind six years ago. Steep ridges, the kind fire loves, surround the blaze. And it’s 11,000 feet in elevation.

When a handful of firefighters rappelled and smokejumped in near the fire, Truett said, they had to be pulled out less than two hours later. They’ve had to fight the blaze from the air, with helicopters dousing it with water.

”We never backed off on the idea of suppression,” Truett said. “It was, ‘Where can we fight it on more favorable terrain?’ If there had been good ground to put firefighters, we would have gone after it.”

Fire behavior analysts Kim Soper and Diane Rau are two of the team members Truett relies on to help figure out what the Jaroso Fire is going to do next. They modeled and mapped both short- and long-term predictions for the blaze.

Both worked in fire management before they became analysts. They input data about historical weather, weather forecasts, fuel types and terrain to predict where a fire is likely to move. They also fly over burn areas whenever possible. “It really gives us a broad aspect of what it looks like,” Soper said. “When you look at a map, it is hard to get a feel for the fuels, timber type, terrain.”

They create the data from overnight infrared flights that show hot spots and possible ignition spots. Those maps appear on Inciweb each day to keep the public informed.

One of their models predicts where the fire perimeter is likely to grow based on hourly weather forecasts and actions, including water drops, taken by firefighters the prior day. It can forecast the fire’s growth for six days.

Another model helps the team create likely scenarios of the fire’s behavior for seven to 21 days. Rau calls it “gaming out.” They combine forecasts and historical weather data to create the scenarios for the burn area. They overlaid 2,000 such scenarios for the Jaroso Fire. Where scenarios overlap, the chances of fire increases.

Tom Bird, the team’s incident meteorologist, sits beside Soper and Rau in front of his own set of laptop and mobile device screens.

The National Weather Service has bout 70 meteorologists specially trained to help on wildland fires and other disasters.

Bird is able to grab data from all kinds of servers through the National Weather Service. “I’m looking at anything and everything that has to do with weather — winds, moisture, temperatures, pressure and the Haines Index — that’s what tells us if we’re going to have a day that promotes large fire growth.”

The Haines Index measures an area’s dryness and stability, a measure of wind. “Winds are a very critical safety measure when we talk about having a firefighter close to the line,” Bird said. “If the winds change direction, it can catch firefighters off-guard and create a safety hazard.”

A sudden wind shift is exactly what forced the Tres Lagunas Fire to whirl 180 degrees back on itself, shoot through treetops and force firefighters battling it in the Pecos Canyon to flee.

As a mountaineer who has climbed all of Colorado’s 14,000-foot peaks, Bird knows the critical role weather plays in firefighter safety. “The primary reason I’m here is first and foremost the safety of the firefighters on the line,” Bird said. “The second is to help operations with their tactics, so whatever they do can be the most effective.”

Bird also lets the operations team know when red-flag conditions are predicted, which increases the chances a fire will grow. In the Southwest Region, red-flag conditions include a three-hour drop in relative humidity below 15 percent, or winds stronger than 20 miles per hour.

The Doce Fire, started by lightning June 18 near Prescott, Ariz., grew to 500 acres within two hours during such red-flag conditions.

Predicting weather is still an inexact science, Bird said. But he is confident he can give Truett and other fire crew bosses the reliable information they can use to keep firefighters safe until the Jaroso Fire is contained.