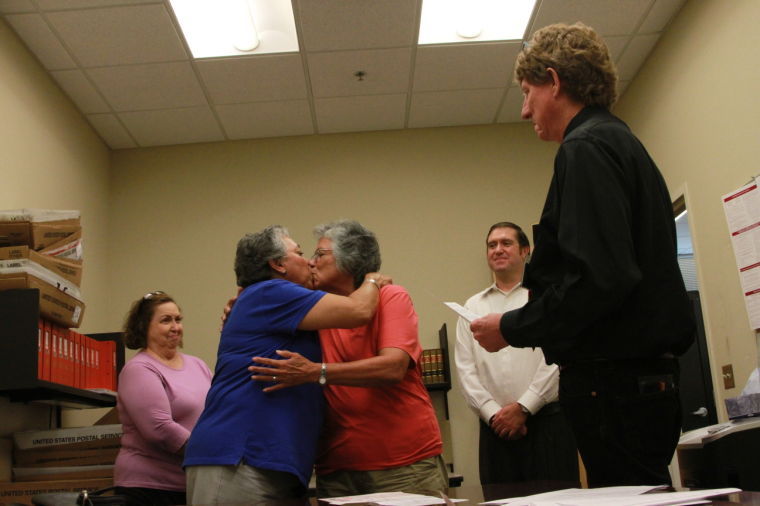 Catherine Martinez and Linda Montoya are married by the Rev. Jess C. Williams, a Doña Ana County employee, at the County Clerk's Office in Las Cruces. More than 40 same-sex couples obtained their marriage licenses after the county clerk announced the county would be the first in New Mexico to marry same-sex couples. Juan Carlos Llorca/The Associated Press 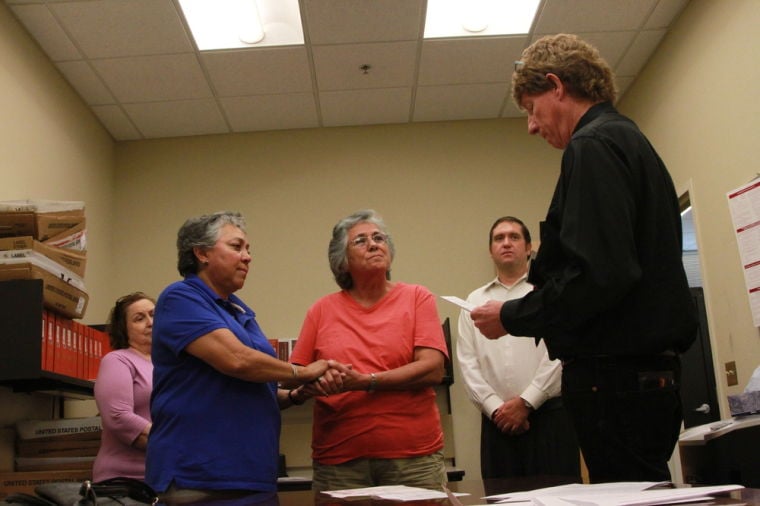 Catherine Martinez and Linda Montoya are married by the Rev. Jess C. Williams, a Doña Ana County employee, at the County Clerk's Office in Las Cruces. More than 40 same-sex couples obtained their marriage licenses after the county clerk announced the county would be the first in New Mexico to marry same-sex couples. Juan Carlos Llorca/The Associated Press

Republican Sen. William Sharer of Farmington said a lawsuit will be filed, potentially by the end of the week, seeking a court order to stop County Clerk Lynn Ellins.

“It has to do with a county clerk cannot make law. That is the Legislature’s job,” said Sharer, who sponsored a constitutional amendment in 2011 to define marriage as between a man and woman.

He said more than two dozen GOP lawmakers have agreed to join the lawsuit. It likely will be filed with the state Supreme Court, but Sharer said lawyers were trying to decide the best legal strategy.

Democratic Attorney General Gary King, who plans to run for governor next year, said Thursday he won’t take action against the Doña Ana clerk. But he told The New Mexican that legislators probably would have legal standing to challenge Ellins’ action.

Meanwhile, gay and lesbian couples flocked to Southern New Mexico for a second day Thursday to take advantage of a surprise decision to issue same-sex marriage licenses. And most were tying the knot on the spot, making sure they got their long-awaited marriage certificates before any courts or state officials could interfere.

“We wanted a piece of paper that said, ‘Yes, the 20 years have not been in vain,’ ” said Thom Hinks of Albuquerque.

Hinks said he and his partner, Richard Sunman, spent much of their three-hour drive discussing whether to get married immediately in Las Cruces on Thursday or use the license to have a better-planned ceremony somewhere else in the state.

They said they decided to do it right away, remembering that Sandoval County Clerk Victoria Dunlap — who issued marriage licenses to 66 gay couples in 2004 — was quickly stopped from issuing more licenses.

“All it would take is for a judge to issue an edict and strike it down,” Hinks said.

Republican Gov. Susana Martinez, while saying voters should decide whether gay marriage should be legal, did not indicate she planned to do anything to try to halt the practice as cases testing the legality of same-sex marriage work their way through the state Supreme Court.

The gay marriage issues pose political risks for candidates in New Mexico, which leans Democratic in statewide voting but has many moderate to conservative Democrats in rural areas.

“Issues like immigration, abortion and gay marriage, those are issues that sometimes statewide candidates want to keep away from. Just the fact that both Gary King and the governor haven’t exactly come out gangbusters on this issue demonstrates that they recognize it’s a double-edge sword that plays both ways,” said Brian Sanderoff, an Albuquerque pollster.

Pat Davis of ProgressNow New Mexico, a liberal advocacy group, said gay marriage may not become a big political issue if it’s resolved by the state Supreme Court well before next year’s elections.

Otherwise, the Democratic-controlled Legislature will face pressure to approve a constitutional amendment, which would put the issue on the November ballot and make it a high-profile topic for voters.

“And then I think all bets are off,” Davis said “I think it does become an issue no matter what.”

Ellins began issuing same-sex marriage licenses Wednesday after he said his review of state law allowed him to do so. By Thursday afternoon, more than 70 licenses had been issued.

Most of the couples were from New Mexico, Ellins said. But a few crossed state lines.

Monica Corral and Luz Saenz said they came from nearby El Paso, even though their marriage won’t be legal in Texas.

They said they just wanted to make the lifelong commitment, and “hopefully I will live long enough to see it happen in Texas,” said Saenz.

County and city officials around the country have taken it upon themselves in recent years to issue same-sex licenses, with one of the first and most highly publicized cases in San Francisco in 2004. The city issued the licenses for about a month before being ordered by courts to stop. The marriages were eventually invalidated. But gay marriage is now legal in that state.

I agree with the Governor. In my opinion this has gotten out of hand with county/city officials and judges making the decisions for the people instead of the decision being made BY the people. If the people vote for same-sex marriage, so be it. But the arrogance of the mindset of being above the law and taking democracy from the hands of the voters has got to stop or we'll see more and more issues being taken from the hands of the voters.

"King’s office has said that state law prohibits same-sex marriage, but those restrictions are unconstitutional."

I don't think that's true. I think the definition of marriage in New Mexico is gender neutral. Which is why a District Judge ruled that the "equality of rights under the law shall not be denied on account of the sex of any person"...

Not surprising at all. The GOP in recent times has self-identified as the political party that supports "Liberty". By very definition, doesn't the term "Liberty" encompass the right to marry whomever you wish without government intervention? I get so sick of these GOP politicians who fail to recognize just how hypocritical their stance on this issue really is. Also, what is the number one argument against gay marriage? It is always linked to religion! Uhmmm, don't we provide for separation of church and state in the constitution for a reason? Religious beliefs should be kept to the individual and should have no influence over the lives of other individuals. The discriminatory and unconstitutional actions taken by these GOP politicians, display just how shallow and narrow minded some individuals can be.

Can you lawfully marry your mother, your sister or your brother?

Can a man marry 3 women?

Or perhaps, more realistically, can a man marry a woman, sire several children with her and then divorce her with no consequences?

Is this your definition of liberty?

Liberty isn't an unlimited license to do as one pleases, but rather a freedom to act responsibly within the constraints of a moral code.

I'm sure this is news to you.

Marriage equality means, two unrelated adults of the same sexual orientation may marry. The contemporary movement for civil marriage for same-sex couples grew out of two facts; 1) empirically we know that homosexuality is a universally occurring, normal human variant; 2) despite the social prejudice, there long have been many same-sex couples who made lives together. There is no rational basis for discriminating against same-sex couples who wish to marry.

As Dominic noted above, opposition to homosexuality itself, as well as to civil rights for gay people grows mainly out of anti-gay religious bigotry. It is unconstitutional for a religious stricture to be imposed on people through civil laws.

All of the irrelevant junk that you are spouting was also being said when the Supreme Court decided Loving v. Virginia, which includes this: "Marriage is one of the "basic civil rights of man," fundamental to our very existence and survival.... To deny this fundamental freedom on so unsupportable a basis as the racial classifications embodied in these statutes, classifications so directly subversive of the principle of equality at the heart of the Fourteenth Amendment, is surely to deprive all the State's citizens of liberty without due process of law. The Fourteenth Amendment requires that the freedom of choice to marry not be restricted by invidious racial discrimination. Under our Constitution, the freedom to marry, or not marry, a person of another race resides with the individual and cannot be infringed by the State."

Have you actually read the New Mexico Constitution, it specifically forbids polygamy. What is wrong with you people. You might want to take a course in reasoning and critical thinking and read up on the slippery slope fallacy!

When has the GOP ever helped anyone? (GOP- Grand old pricks)