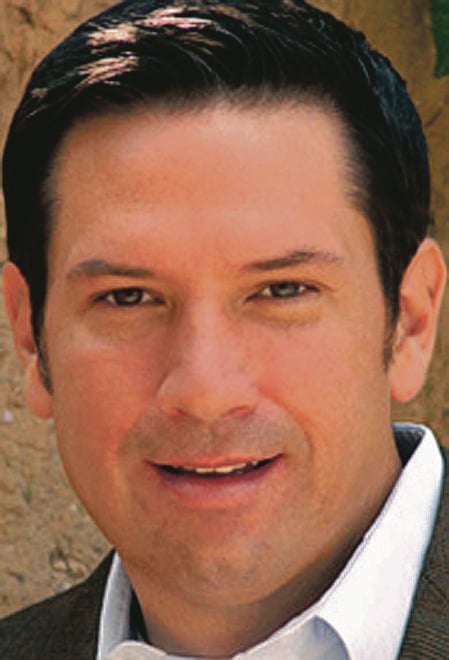 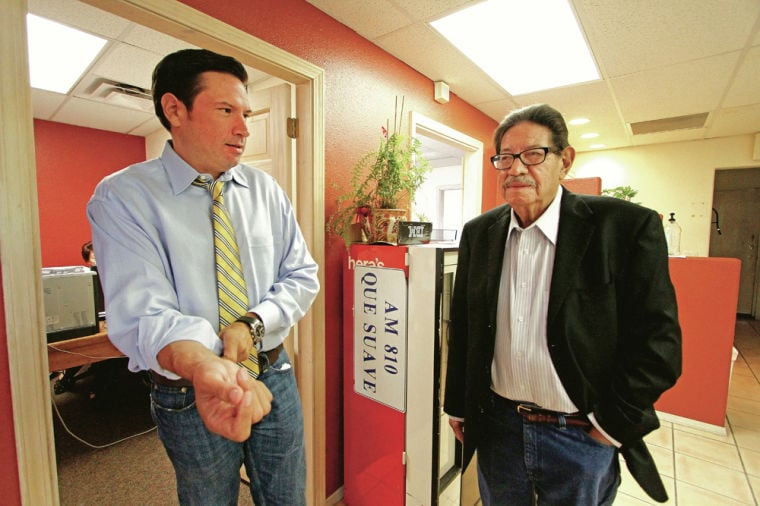 At the end of the month, Javier Gonzales will step down as state chairman of the Democratic Party. But, Gonzales insists, he will not be leaving politics.

However, he’s not necessarily thinking about some behind-the-scenes, party-elder position. In fact, Gonzales said in a recent interview, he’s considering running for some elected office.

“I was raised believing in public service,” Gonzales said. “I’ll probably spend the summer evaluating options that I might have, whether it be on the elected side or other, and make a decision at that point. I certainly don’t plan on leaving politics.”

He declined to say which office or offices he’s considering running for.

Back in the mid-1990s, when he was serving on the Santa Fe County Commission, Gonzales made little secret that he was interested in running for Congress. But now he says that’s not on his horizon, as long as incumbent U.S. Rep. Ben Ray Luján, a Democrat, holds the seat. Luján, Gonzales said, is a longtime friend and former schoolmate.

He said serving in an elected office isn’t the only way to “influence good outcomes for your state.” He said his work on the Board of Regents for New Mexico State University is one example.

He’s also vice president for corporate responsibility for Rosemont Realty. “Part of that is developing the Rosemont Leadership Institute, which will provide 30 New Mexico kids with $25,000 scholarships,” he said.

In the recent interview, Gonzales talked about his tenure as party chairman — the high points and the low — as well as the immediate future of the Democratic Party, which next year faces the task of trying to unseat a popular Republican governor in Susana Martinez.

A life in politics: Gonzales, a 1984 graduate of Pojoaque High School, went on to earn an accounting degree from New Mexico State University. He’s also the son of former Santa Fe Mayor George Gonzales, who served in the late 1960s and early 1970s. George Gonzales, who also had served on the County Commission, ran for the Democratic nomination for a congressional seat in 1972.

Javier Gonzales first entered electoral politics in 1994, when, at the age of 27, he won a seat on the Santa Fe County Commission. At the time, he worked as a business analyst for Los Alamos National Laboratory. He also had two weekly talk shows on his family’s radio station, KSWV.

When Bill Richardson was picked in 1997 to be ambassador to the United Nations, Gonzales began campaigning to fill Richardson’s seat in Congress, but he dropped out well before the election when he realized he didn’t have the support of the state Central Committee, which chose the nominee for the special election.

Gonzales seemed to have had enough of politics at that point. In November 1997, he told reporters he was considering not seeking re-election to the County Commission and instead going to business school. But he later changed his mind and won a surprisingly tough re-election to a second term in 1998.

In August 2002, four months before the end of his term, Gonzales resigned from the commission to take a job at a global management consulting company.

In 2006, he was on the Board of Regents at New Mexico Highlands University at the time the board voted to oust Manny Aragon, a former state Senate leader, as president. Gonzales at the time said that Aragon’s lack of experience in university administration contributed to problems and lawsuits during his tenure. Aragon currently is in federal prison for convictions unrelated to his rocky tenure at Highlands.

Gonzales later was appointed to the New Mexico State University Board of Regents.

The chairmanship: Gonzales was elected Democratic Party chairman in the fall of 2009 after previous chairman Brian Colon decided to step down to run for lieutenant governor. Gonzales was the choice of Lt. Gov. Diane Denish, who would go on to become the Democrats’ 2010 nominee for governor.

“The ironic part is that this was never a position I saw myself running for or seeking,” Gonzales said. Denish, he said, convinced him that being state chairman was the right thing to do.

So, how did he do as chairman?

Judging by the performance of the Democratic Party of New Mexico in the two election cycles since Gonzales became chairman, one might say “terrible” in 2010, “excellent” in 2012.

Of course, it’s never that easy. There are too many factors, both national and closer to home, to blame Gonzales for the nationwide Republican wave of 2010, or to give him complete credit for the Democratic resurgence in 2012.

Following the Democratic sweep of 2008, 2010 was a terrible year for Democrats nationwide. In New Mexico, the Democrats lost the governor’s race, a seat in Congress, the secretary of state position and eight seats in the state Legislature.

“Never in my my wildest dreams did I think that 2010 would have been as rough as it was on Democrats,” Gonzales said.

“We can go back and talk about all the good things Gov. Richardson did and really did well for the state. But Susana was able to parlay some negative news about the governor and spend a lot of money and tie Diane into that.” (The “negative news” included stories of federal investigations into alleged pay-to-play scandals in state government. Richardson never was charged in any of the investigations.)

A resounding defeat in the polls usually means a state party chairman won’t seek another term. But Gonzales decided to go on, despite a strong and sometimes bitter challenge from Albuquerque lawyer and longtime party activist Sam Bregman. In early 2011, the Democratic Central Committee re-elected Gonzales by an 11-vote margin.

Bregman — who again is running for the chairmanship — was reluctant to talk about Gonzales when asked recently. “I’m looking forward at the future of the party, not at the past, ” he said.

“Certainly there has been a lot of criticism about the responsiveness of the party, and there have been times I’ve been among the critics,” Bregman said.”We need a party that responds to all Democrats in every part of the state.” He declined to elaborate.

Gonzales said his major role as chairman in his current term was being part of the planning and coordinating of the party’s get-out-the-vote effort as well as raising money. He said since he became chairman, the party has raised more than $6 million.

“We knew that Heather Wilson was going to be on the ballot, and she was going to have to be a tough opponent for us,” Gonzales said. And, he added, he knew the governor was going to be behind a well-funded attempt to reshape the Legislature.

Gonzales said to do well in 2012, the state party would have to engage in “a lot of planning and preparation for a very aggressive ground campaign on our side.” This, he said, meant knocking on more than 300,000 doors and making more than 500,000 phone calls to get out the vote.

Obama led by comfortable margins in virtually all polls for months before the election — so much so that the Romney campaign pulled out of the state by the end of the summer. But this worried Gonzales. He said he and others feared that many Obama supporters would stay home — which would have hurt Democrats in the congressional and legislative races.

Besides the elections, Gonzales said part of his duties as chairman was “holding Democrats accountable.” One of the things he had to do, he said, “was stand up to Democrats who had ethical challenges.”

He named former Public Regulation Commissioners Jerome Block Jr. and Carol Sloan. “Those were two individuals who were in office, and when they got in trouble, I asked them to resign,” he said.

“You can’t afford to have the public lose trust in your candidates or elected officials,” Gonzales said.

Gonzales said the Democratic Party has made a transition from a period in which high-profile corruption cases “kind of haunted us” to the current time, “where we have these great Democrats that are emerging onto the scene.”

He named Heinrich, Luján, state Reps. Brian Egolf of Santa Fe and Moe Maestas of Albuquerque, and state Sens. Peter Wirth of Santa Fe, Tim Keller of Albuquerque and Howie Morales of Silver City as examples of a new generation of Democratic leaders in the state.

The party’s future: While some Democrats seem glum about their party’s chance of defeating Martinez in the next governor’s race, Gonzales said it can be done — but it’s going to take some serious fundraising.

He estimated it will take between $8 million and $10 million to do it. That figure, he explained, includes the Democratic nominee’s campaign, the state party’s coordinated campaign and various pro-Democrat independent groups.

“We won’t have as much money as the Republicans. Susana has shown she’s not shy about raising lots of money from out of state.”

The state’s stagnant jobs numbers will be an issue, he said. So will Martinez’s veto of a bill that would have raised the minimum wage from $7.50 to $8.50. (Martinez has said the $1 increase in the bill she vetoed was too much and would have cost jobs. She said she would have signed the bill had the increase been only 30 cents, which would have made it the same as Arizona’s.)

At the time of the interview with Gonzales, only one Democrat had come forward to challenge Martinez, Attorney General Gary King. “I’ve got a lot of faith in the attorney general if he is the nominee that he’ll be a credible candidate,” Gonzales said. But he predicted more Democrats would soon join in the gubernatorial primary. (Not long after the interview, state Sen. Linda Lopez of Albuquerque said she would be announcing her candidacy, and Keller said he, too, is considering running.)

But Gonzales said if the party is not able to motivate people to vote in an off-year election, the consequences could be dire. Not only could it lose the governor’s race again, but “we could come very close to losing the [state] House, and if we do that, we’re obviously in a whole lot of trouble when it comes to Democrats in the state.”

There is no mention of the person that should be the next Dem. Party Chair in NM. Of course I'm talking about ROXANNE LARA!

Ms. Lara is not from urban NM and the Party needs to move toward engaging ALL NM Democrats. Not just those in Santa Fe and Albuquerque. Ms. Lara is a loyal, driven and engaged Democrat. She is the antithesis of everything embraced by Republicans. She favors Party building, engaging women and minorities, protecting jobs and workers, building a DIVERSE economy and openness and fairness in governance.

Sam really offers none of that. Sam offers an urban, insider approach that has only served to fracture NM Democrats in the past. Let's elect a new, engaged and committed Party Chair!