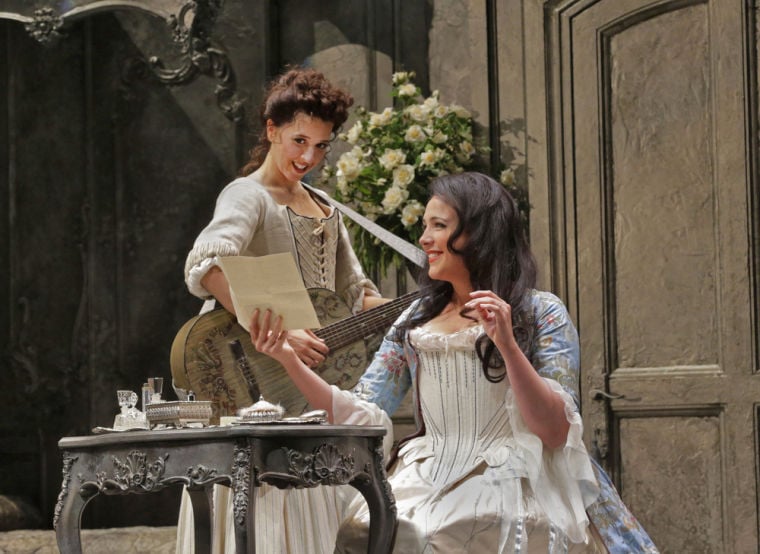 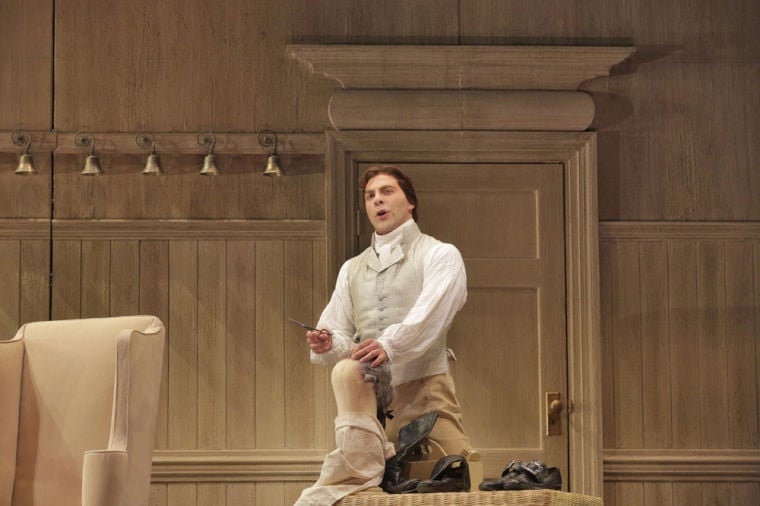 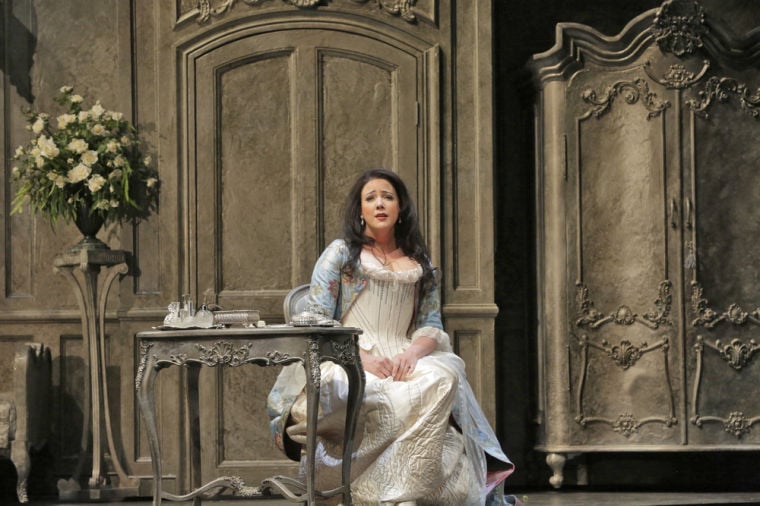 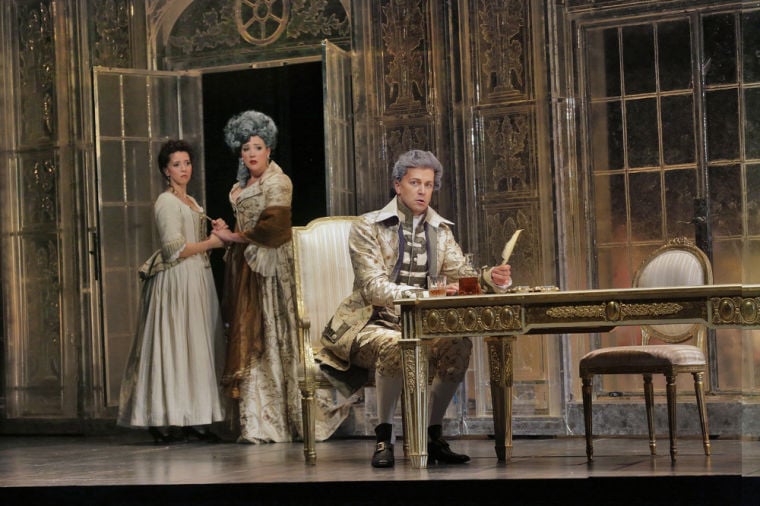 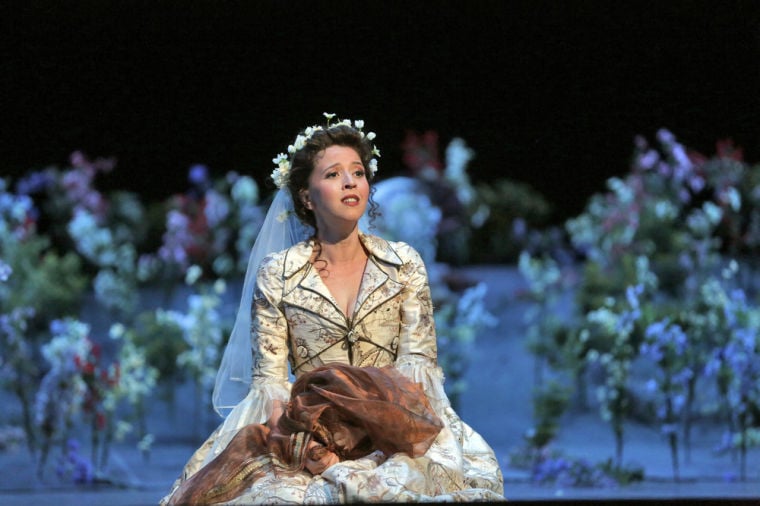 Audience members were greeted by a familiar sight as they took their seats Saturday night for the first performance of Mozart’s Le nozze di Figaro in The Santa Fe Opera’s new season: a stage studded with blooming stems — phlox, perhaps — that represent the garden in which the work’s machinations would conclude four acts later. This is indeed the same production the company offered in 2008, when it was created by director Jonathan Kent, but for its revival it has been subtly transformed and improved by Bruce Donnell, whom the program now credits as its sole director.

It was a good production to begin with, elegantly conceived in 1780s style. Apart from the garden, Paul Brown’s sets include paneled rooms for much of the coming and going and, for the Countess’ boudoir, a room dense with dark-silver rococo filigree. Brown’s period costumes make everyone look like they’ve stepped out of a painting by Greuze, and Duane Schuler’s lighting trains the eye on what might otherwise be overlooked, particularly essential in the nocturnal conclusion.

Nonetheless, some conceptions in the original production begged to be cleaned up. The most egregious error in 2008 involved the Countess, who had been made to behave despondently in Act II, flailing about disheveled in her dressing gown, practically tearing her hair out. Donnell has rectified that, and she now commands the audience’s respect with far greater dignity — a woman demeaned by her husband, but who has fully assumed the nobility that came with her now-unhappy marriage. Since most of the cast is new to the production, they needed to master how to convey their complicated interactions clearly, which they have done masterfully with their new director. The production is beautiful to behold, and it leads the audience through the maze of hilarity and heartbreak and, ultimately, love that Mozart and his librettist, Lorenzo Da Ponte, molded into a timeless masterpiece.

Musical standards are high. Conductor John Nelson elicits careful balances from his orchestra and paces the musical paragraphs to clarify the theatrical momentum and Mozart’s musical architecture. The casting of the singers is inspired. Every member of this handsome assemblage fits into the action with absolute credibility, each bringing substantial vocal and dramatic gifts to bear.

You have to love them all, but let’s start with Susanna, first of all acknowledging that it is such a demanding role — she spends much of the show front and center — and then applauding pert, fresh-toned soprano Lisette Oropesa, who made everyone fall in love with her right from the outset in her company debut. Nothing in the evening surpassed her rendition of “Deh vieni, non tardar” in Act IV, in which she spun strands of magic in the evening air. But you can’t have her — and neither can the Count, which is the conflict that motivates the whole opera. No, her heart belongs to Figaro; and who can blame her, since Zachary Nelson infused that endearing character with a similar measure of charm and allure, not to mention a warmly enveloping baritone. A year ago, he was an apprentice here, singing just a few lines as the prisoner Angelotti in Tosca; and now here he is proving himself a polished pro in one of opera’s leading roles. Oropesa is already undertaking important lyric parts at the Metropolitan Opera, and Nelson seems poised to follow her along the operatic fast track.

The Count and Countess, bass-baritone Daniel Okulitch and soprano Susanna Phillips (reprising her role from 2008), make a believable, imposingly tall couple. Okulitch sang with vocal authority that underscored his self-assurance as a character accustomed to getting his way. Phillips took a while to settle in, as Countesses often do, but she arrived at a firm, full-throated performance. Her voice has been evolving impressively in recent years, and one senses that she may be on the verge of the vocal luxuriance that has marked the most memorable Countesses over the years.

Mezzo-soprano Emily Fons was a worthy Cherubino, remarkably boyish in her bearing, and soprano Rachel Hall, an apprentice, made an alluring, devious Barbarina. Keith Jameson was right on the mark as Don Basilio, as he seems to be in every character role he touches. But let us not overlook the pair who are sometimes discounted in this opera, Doctor Bartolo and Marcellina. Bass-baritone Dale Travis is amusingly pompous, but if you want a graduate seminar in operatic stage artistry, I suggest you keep your eyes trained on mezzo-soprano Susanne Mentzer. Formerly a distinguished Cherubino, she has graduated to the matronly role of housekeeper (and, it is revealed, Figaro’s mother) and turns the part into a model of comic portrayal without upstaging her colleagues.

One might take exception to details here and there. I was unconvinced by exaggerated rubatos that occasionally stretched instrumental and vocal phrases — in the aria “Dove sono,” for example. I wish more suspense had been built into the moment where the Countess pardons her errant husband. We know she will forgive him, but he has reason to assume the opposite, having just been caught wooing the woman he takes to be Susanna. His redemption would seem sweeter if he sweated a moment longer.

Le nozze di Figaro is my favorite of all operas, and I have seen it more often than any other, but a good production can still disclose new ideas. On Saturday night, I heard something I had not encountered before. In the Act III duet “Canzonetta sull’aria,” the Countess dictates to Susanna a letter that launches their entrapment of the Count. It is one of the loveliest expanses ever put on paper, and a musician’s natural response is to simply bask in its beauty. Phillips and Oropresa, however, took an emotional turn as it unrolled, and the atmosphere shifted from delight to regret. Right they were; they may be embarking on some exhilarating mischief, but the subject is really a failed marriage. The greatest classics earn their status because they keep on revealing their secrets.