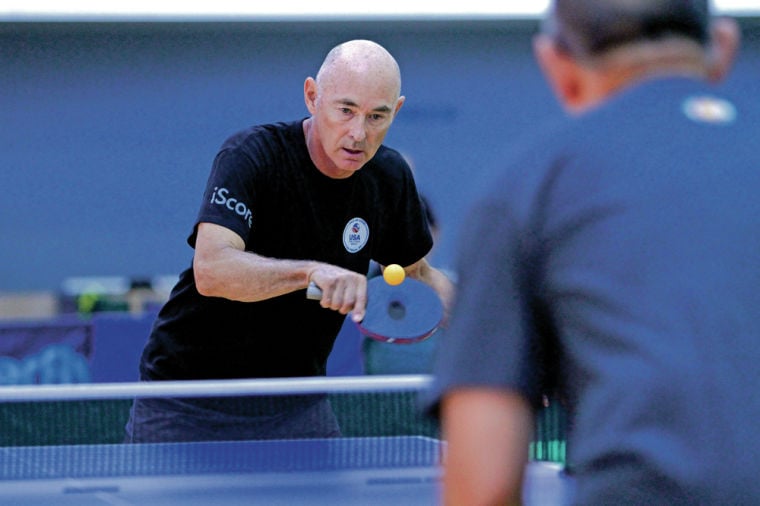 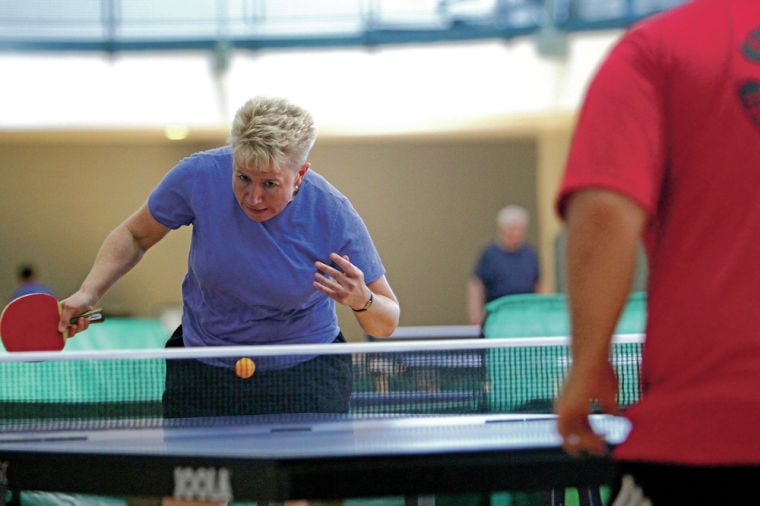 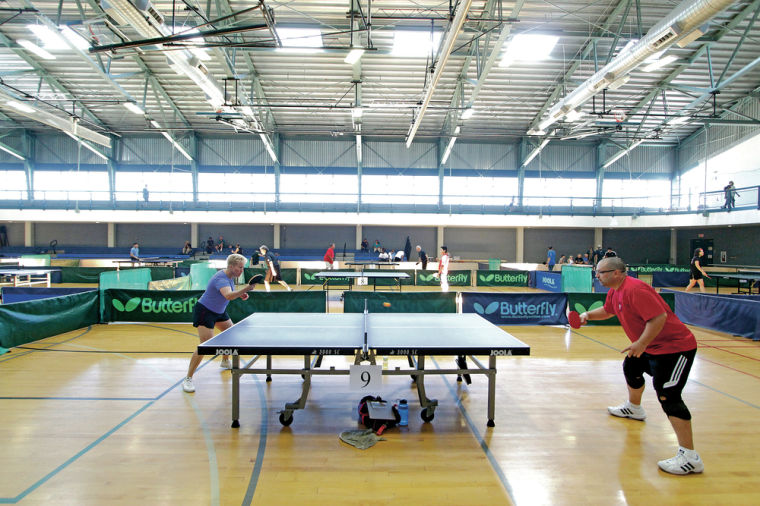 Players, some half-crouched, served and then prepared to return an opponent’s serve. The squeaking of tennis shoes on the gym’s wooden floor filled the space, along with the unmistakable click-clack of orange balls being hit against the table, faster and faster, until a player scored a point and the ball went bouncing into the court’s corner.

“It’s a really difficult game,” said Mark Nordby, a coach from El Paso who came with members of his club to Saturday’s open.

Nordby, who coached a table tennis player who made it to the 2004 Olympics in Athens, Greece, said the most difficult part of the game for a beginner is getting a handle on the spin, which can change the way the ball behaves. In general, though, Nordby said it’s a challenge to recruit new players to the game.

“It’s really hard to keep people interested in table tennis,” he said, noting that his club in El Paso typically hovers around 30 people. The problem is that beginners “get frustrated when they don’t improve right away.” Nordby said he has also coached tennis and has been a PGA golf instructor, but he believes that neither is as difficult as table tennis. “Tiger Woods has a minute and a half to decide exactly what he wants to do. We’ve got an eighth of a second.”

With 40 contestants from New Mexico and neighboring states at the Chavez Center, there was no shortage of interest in the game Saturday — or the seasoned players. Tournament organizer and Santa Fe Table Tennis Club coach Kali Goring said he’s hoping to host an open annually, since Santa Fe is located a reasonable distance from Phoenix, Denver and El Paso. “We’re hoping this is just the first of many events,” Goring said, adding that in the future, he’s hoping to “attract more players from the region and the entire country.”

Goring, who initially got interested in table tennis at a competitive level after receiving a table as a birthday gift, is a certified table tennis coach and helped found the Santa Fe club. And he hasn’t lost interest in playing the game — he won three gold medals in table tennis at the 35th annual Santa Fe Senior Olympics in April.

At Saturday’s event, Goring competed in the doubles round — which featured 15 teams — and the singles round for the B division. (There were three divisions — A, B and C — all based on skill level. The highest skill division is A.) In the doubles round, however, Goring didn’t come out victorious; Albuquerque residents Rick Massoth and Ron Pickett did.

Massoth and Pickett have been playing together as a doubles team for 13 years and, according to Massoth, they’re undefeated playing together in New Mexico in that time. The two also competed in the singles tournament — which featured 38 players — as the third- and fourth-seeded players in the A division. Pickett took second place in the A division.

The No. 1 seed in the A division — and the division’s first-place winner — was table tennis veteran Richard McAfee, who has been involved in the sport for 50 years. McAfee traveled from Aurora, Colo., for the open and is hoping, like Goring, that it will be a recurring event.

“We don’t have enough tournaments in this general region,” McAfee said. “We’re trying to encourage [organizers] to hold more tournaments. We are sort of an undeveloped area for the sport, but it’s growing.”

Though young people were not as prominent among the group as older, more experienced players, several children were involved in Saturday’s open. One of them, 14-year-old Yair Vargas from Chihuahua, Mexico, who arrived as part of Nordby’s group from El Paso, has played in 10 tournaments — including six in the U.S. — since he first start playing competitively three years ago.

“You sometimes have it that a 12-year-old plays against a 70-year-old,” Goring said. “And they’re very compatible. That’s what’s great about table tennis, I think.”