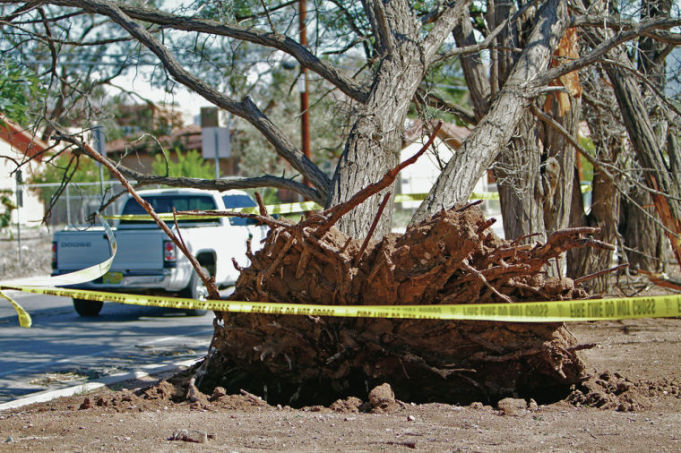 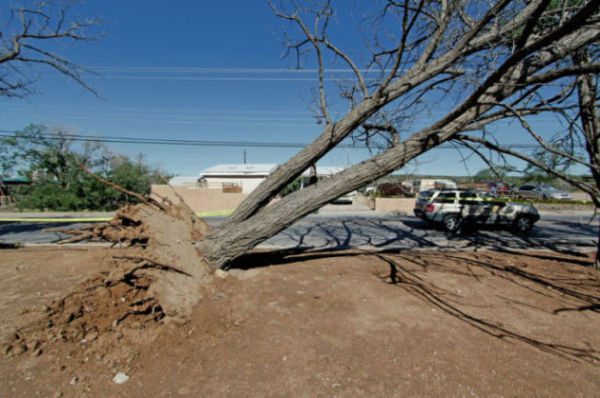 Utility and road crews spent Monday cleaning up after a Sunday night thunderstorm that tore through Santa Fe and Rio Arriba counties with strong winds that knocked out power lines, toppled traffic signs and trees, closed a few roads and left the first season’s first snow on mountaintops.

The storm, which produced heavy winds and hail in addition to lightning strikes and persistent rain, came after a series of heavy rainstorms that flooded cities and counties around the state.

The storm knocked out community radio station KSFR-FM 101.1’s broadcast signal between late Sunday night and Monday afternoon. Operations Manager Sean Conlon said the Sunday night weather toppled a power line that supplies power to the station’s transmitter atop Pajarito Mountain at about 8:30 p.m. The station returned to the airwaves at about 4:15 p.m. Monday.

The public could still access KSFR normal programing through its website at ksfr.org, though the “At Noon” podcast, a daily news program with national and local news, was cut short. KSFR doesn’t have a backup transmitter or power generator.

The Public Service Company of New Mexico reported 429 outages in Santa Fe, whereas the state saw about 3,000. Valerie Smith, a PNM spokesperson, said a combination of trees falling on power lines and lightning striking equipment “wreaked havoc across the state.”

The storm also blew over a traffic sign near the St. Francis Drive and St. Michael’s Drive intersection, said Miguel Gabaldon, the New Mexico Department of Transportation’s district five engineer. He said he put in a work order to replace the sign and that repairs could cost between $5,000 and $15,000, depending on the severity of the damage. Gabaldon said the department on Monday also was dealing with silt on roadways.

In Rio Arriba County, two inches of hail in the Chili area north of Española, where flooding damaged a dozen houses last week, caused deputies to slow traffic along U.S. 84 between 7 and 9 p.m. Sunday.

About the same time, downpours west of N.M. 68 caused arroyos to overrun their banks and flood homes in Alcalde. Deputies evacuated eight people from four homes in the area.

Parts of N.M. 76, in the La Puebla area, also were closed for short periods due flooding from the same storm.

The National Weather Service forecast calls for a mix of clear and partly cloudy skies through Friday night.

Lesson to be learned. Cut down dead trees before the cause damage or hurt someone. That tree is very obviously dead.

That tree is still there, it should have been removed yesterday.